A clunky computer-age thriller in which geeky programmers sell out to code zillionaires -- any resemblances to the living or dead are purely coincidental. 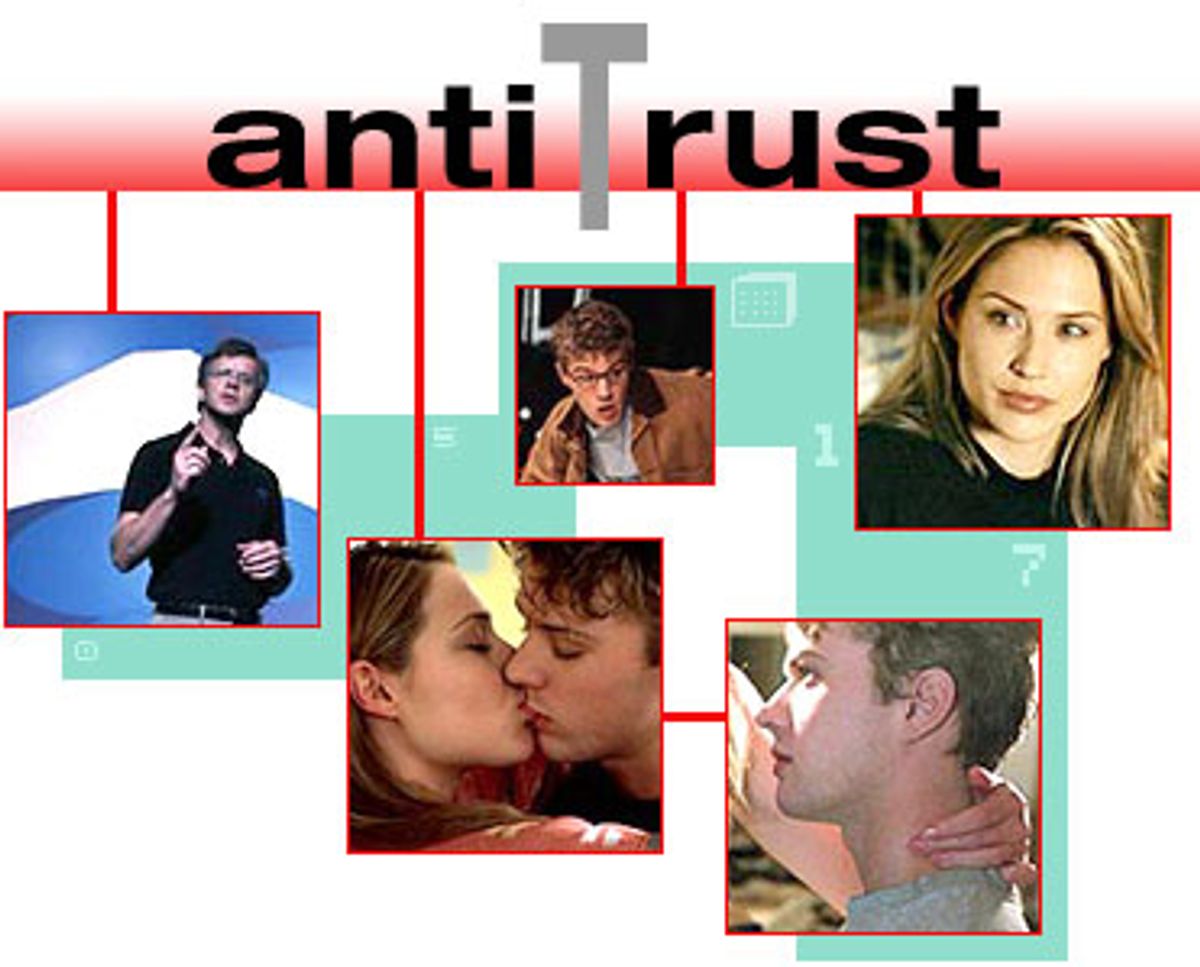 Since geek glamour is an idea whose time has come, it shouldn't be impossible to make an intelligent and beguiling thriller about the open-source software movement. Peter Howitt's "AntiTrust" just isn't it.

That's not for lack of trying. Howitt gives us a believably good-looking and only vaguely socially awkward hero in Ryan Phillippe, a software wunderkind who reluctantly sells out to big business. And the movie's Bill Gates clone, played by Tim Robbins, has a pleasingly malevolent ooziness that's oiled up nicely by his disingenuous aw-shucks demeanor. He's one of those genius zillionaires who only recently traded their sloppy cords for Armani -- you can almost still hear that annoying swish-swish sound when he walks.

But if "AntiTrust" starts out with the promise of being loose and juicy and fun, Howitt quickly loses the trail. To its credit, "AntiTrust" isn't a screed about the potential horrors of software monopolies; it's more like a conventional thriller with a bit of vaguely idealistic ranting sprinkled in. And of course "AntiTrust" isn't supposed to be realistic. But Howitt, who also directed the enjoyably woolly "Sliding Doors," doesn't take firm enough control over Howard Franklin's screenplay, and allows the story to career wildly into the territory of absurdity. He toys with strange digressions, including an oddball subplot involving death by sesame seeds, but he lacks the conviction to push them to outlandish limits. "AntiTrust" poops out before it ever really gets going.

Milo Hoffmann (Phillippe), a free-software advocate in the midst of starting a potentially explosive software company with a few of his buddies, suddenly finds himself being courted by Gary Winston (Robbins), president and founder of the multibillion-dollar computer company NURV (the letters stand for "Never Underestimate Radical Vision"), which the Justice Department has been eyeing warily for its monopolistic practices. (Any resemblance to persons and/or companies living or dead is, of course, purely coincidental.)

Winston is on the cusp of unveiling a global communications system, called Synapse, that will allow him to become even more filthy rich than he already is and thus rule the world, metaphorically speaking. With his wire-rimmed glasses and motivational-speaker intonation, he's a mild-mannered megalomaniacal Batman villain for the 21st century. But he needs Milo's genius if he's going to make Synapse's launch date, so he woos the young man away from his buddies and his idealistic pipe dreams. Not long after he starts his new job, Milo realizes that Winston has no qualms about knocking off anyone who stands in his way, including, or perhaps especially, young software whizzes who work out of their garages. Milo spends the rest of the movie trying to find a way to expose Winston, poking his way into a viper's nest of intrigue and deception.

Or maybe it's really more of a rabbit warren. Howitt seems to think he's navigating an elaborate and dangerous maze of twists and turns, but before long it feels as if he's just killing time. Certain plot angles make no sense whatsoever, and you wonder what they're doing here. Milo unearths a secret about one of his co-workers -- she was molested by her stepfather as a child -- and confronts her with his knowledge as a way of enlisting her aid, but it's never clear what bearing this particular fact has on the story.

The movie's conclusion feels rushed and anticlimactic; since we're told so early on exactly who the bad guys are, we expect Milo to come up with some astonishingly clever way of exposing them, or at least to squeak through some dangerous scrapes along the way. The tensest moment in the movie involves his finding a small packet of sesame seeds (which he's deathly allergic to) hidden in a toolbox. Handled right, it's the kind of off-the-wall touch that could be unnervingly sinister, but Howitt plays it so halfheartedly that it's simply ludicrous.

Robbins is the only actor in the picture who looks as if he's having any fun: When he stops by Milo's cubicle at the gleaming high-security NURV facility, to ooh and ah over the bright, shiny lines of software code that spill magically onto Milo's computer screen as the result of his furious and concentrated typing, he's like a caricature of every computer nerd made good we've ever read about. His home, a Northwestern sci-fi playhouse, is a monstrosity of glass and computer-generated art, but Robbins makes it clear that Winston takes very little interest in his surroundings. His real passion is software code, and his enthusiasm is as boyish as his manners are boorish: He munches loudly on Pringles potato chips as he looks over his young protégé's shoulder, letting the crumbs spill and spray from his rubbery lips.

Whenever Robbins isn't on-screen, "AntiTrust" sags. Phillippe is just boyishly good-looking enough to be believable as a genius code slinger (or at least a Hollywood version of one), but there's nothing going on behind his eyes. Even when he's in danger, he's placid to the point of somnambulant. Rachael Leigh Cook, as Lisa, a brilliant fellow NURV employee, looks like a deadpan punk princess but throws off barely a spark of life. And Claire Forlani, as Milo's artist girlfriend Alice, is numbingly expressionless. She has one note, passivity masquerading as mystery, and she plucks at it again and again like a tired, stretched-out harp string.

When Milo finally brings down Winston, the moment should be exhilarating; as it is, it's just a jumble of media manipulation and sloganeering that comes off like third-rate Barbara Kruger art. The finale of "AntiTrust" doesn't have nearly as much freewheeling verve as, say, the ending of Allan Moyle's 1990 freedom-of-speech yowl "Pump Up the Volume." That movie may be a mess, but at least it's a thrilling one. At one point in "AntiTrust," Milo decrees, "Human knowledge belongs to the world." And it's not that he's wrong; it's just that by the time he utters the battle cry, we've long stopped caring. The nerdy underdogs should be the winners in "AntiTrust." Instead, the villain walks off with the movie. He may chew with his mouth open, but he does it with gusto.