Did exposure to American depleted-uranium-tipped weapons cause the cancer deaths of some European peacekeepers who served in the Balkans? 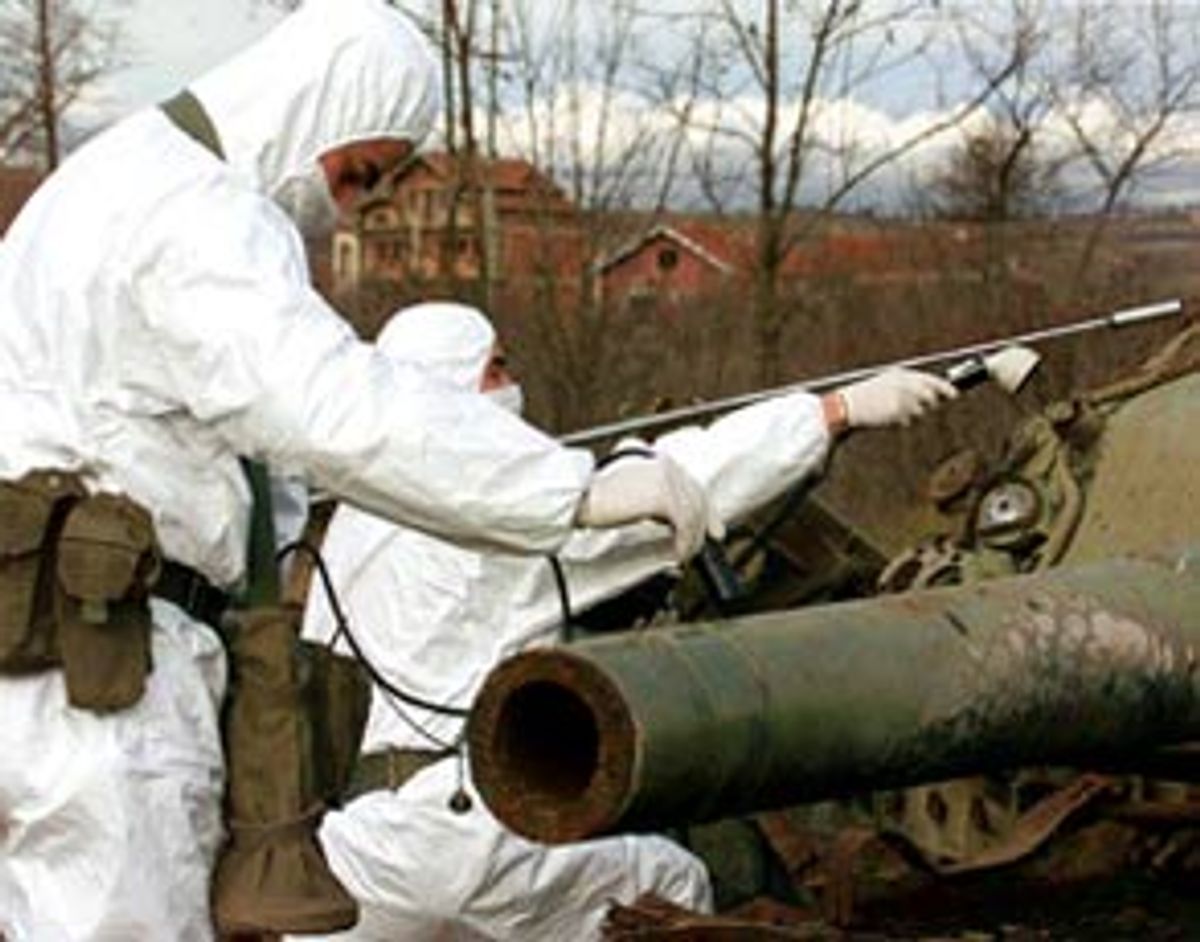 Did exposure to depleted-uranium-tipped weapons dropped by the United States during NATO's Yugoslavia bombing campaigns cause the cancer deaths of 19 European peacekeepers serving in the Balkans?

The science says probably not. But a wave of panic in Europe over the deaths -- the latest, of an Italian peacekeeper who served in Bosnia, occurred last week -- has given psychological credence to what Europeans newspapers are calling "Balkans syndrome."

Like its Gulf War precedent, "Balkans syndrome" is the catchall phrase Europeans use for the unexplained illnesses and cancers that about a dozen NATO peacekeepers serving in Bosnia and Kosovo have been stricken with. As occurred after the 1991 Persian Gulf War, some blame the illnesses on exposure to depleted-uranium-tipped munitions. The United States used the special armor-piercing weapons for the first time in the Gulf War, and then again in Bosnia and Kosovo.

So far, two Portuguese, two Spaniards, five Belgians, four Dutch and six Italians who served in the Balkans have died of cancer, as many as 14 of them from leukemia. A seventh Italian who handled the same type of munitions in Italy but wasn't on the ground in the Balkans, and a Czech military pilot, have also died of cancer. In addition to those who have died, four French, four Belgian and two Spanish peacekeepers are now being treated for cancer, and 23 Italian soldiers are being treated for other illnesses. Further, the Norwegian media reports several leukemia cases among Norway's soldiers.

But looked at statistically, the deaths do not constitute overwhelming evidence of Balkans syndrome. The six Italians who died of cancer make up only a handful of the more than 75,000 Italian troops who have served in the Balkans. According to the World Health Organization, the normal incidence of leukemia among men in Italy is 13 out of 100,000, about the same rate.

Experts with the WHO said this week they doubt radiation from D.U.-tipped weapons was responsible for the peacekeepers' cancers. "Based on our studies, and the evidence we have, it is unlikely that soldiers in Kosovo ran a high risk of contracting leukemia from exposure to radiation from depleted uranium," WHO official Michael Repacholi said at a press conference in Geneva Monday. A WHO survey found that the incidence of leukemia among troops in Kosovo actually decreased slightly in 2000 compared with '97 and '98.

More "detailed surveys are needed before better conclusions can be made," added WHO policy advisor Daniel Tarantola. But while the United Nations agency downplayed the link between the peacekeepers' leukemia and D.U.-generated radiation, Tarantola added, "Breathing ultrafine particles could lead to a theoretical risk of cancer."

The Pentagon, which introduced the D.U.-tipped munitions in its stockpiles in in the 1970s, under the watch of then Secretary of Defense Donald Rumsfeld, says its extensive studies of the health risks of these weapons have failed to turn up evidence of a link between the weapons and soldiers' illnesses.

"We are not aware of any U.S. soldiers suffering from any unknown illnesses as a result of serving in Kosovo," Pentagon spokesman Lt. Col. Paul Phillips said Thursday. "We remain convinced based upon evidence gathered that the use of depleted-uranium munitions does not pose significant or residual environmental or health risks to service members or civilians."

That said, the Pentagon has issued special instructions to NATO-led peacekeeping troops in Kosovo (known as KFOR) for how to handle the D.U. munitions. (While other NATO countries have D.U. munitions in their arsenals, the United States was the only country to use them in the NATO bombing campaigns in Yugoslavia. The U.S. dropped 31,000 rounds in Kosovo and Serbia in 1999, and 11,000 against Serbian positions in Bosnia in 1995.)

"Our advice to military personnel was to take precautions when handling D.U. munitions, touching penetrators or entering vehicles struck by D.U. munitions," Phillips said. "We forwarded the message to all KFOR troops, NATO southern command groups, U.N. forces and all nongovernmental organizations."

William Arkin, a military consultant for Human Rights Watch, visited many of the sites in Yugoslavia bombed by NATO. He believes that America should stop using D.U. weapons. "A sufficient dose and sufficient exposure to D.U. is a health hazard. It is different from every other weapon in the American arsenal" for that reason, Arkin said.

When D.U.-tipped weapons were first introduced in the 1970s, they had two advantages: They were cheap -- depleted uranium is a byproduct of nuclear weapons production, given away by the Department of Energy to the Department of Defense -- and they could pierce tank armor. But today, Arkin said, various non-D.U. alternatives can do the same job. And D.U. munitions may not be so cheap after all. "When you factor in the expense of D.U. in terms of health costs, screening, irritation of allies, worries over civilian collateral damage, it's just not worth it."

If the scientific debate over Balkans syndrome is cloudy, what's clear is that the controversy has become one small part of a largely political phenomenon pitting European governments against Washington. The crisis comes at the same time the European Union has announced plans for its own rapid reaction force, a controversial alliance that would shadow NATO.

"Balkans syndrome is part of European angst," said Arkin. "The Kosovo war came and went. And after it was all over, the facts rubbed European faces in the reality that it was an American war."

Indeed, at times Balkans syndrome has seemed above all an expression of European discomfort with Washington. Several European government leaders have pointed accusing fingers at the Pentagon for the D.U. munitions crisis, even though European governments were members of the alliance that agreed to the bombing of Yugoslavia. The Portuguese and Italian defense ministers flew to Kosovo this week to give moral support to their troops, and Portugal, Britain, Belgium, the Netherlands, Germany, Norway and Italy have announced special screening programs for their peacekeeping troops.

But some European observers counter that Balkans syndrome has little to do with U.S.-European tensions. Among them is Dominique Moisi, a preeminent French commentator on international affairs and the deputy director of the French Institute for International Relations. Moisi said European panic over Balkans syndrome has more to do with growing public mistrust by Europeans of their own governments in the wake of public health scares such as that over mad cow disease throughout Europe and HIV-contaminated blood in France.

"Balkans syndrome is above all a reflection of a new obsession with health security," Moisi said by telephone from Brussels Thursday. "It has more to do with fears of mad cow disease than with America."

"Of course, in some countries, like Italy, it expresses some traditional frustration with America," Moisi continued. "But on the whole, America is not the central factor" -- health is. Panic over health risks from D.U. munitions "has to be viewed as an expression of a new European public distrust of authority, a sense that governments say whatever they like; they lie."

Indeed, just as the 1997 Louise Woodward baby-shaking trial seemed to tap into deep reservoirs of American anxiety and ambivalence about the issues of working mothers and child care, Balkans syndrome seems to feed off equally potent European anxieties rooted in their shaken faith in their governments' abilities to protect them, their food supply and their blood.

"People here now see their governments as a cold monster, endangering the lives of their citizens unnecessarily, by lying to them," Moisi said. "The enemy no longer kills your soldiers. Its own weapons are killing [its] soldiers."

Despite his advocacy for getting rid of D.U. weapons, Arkin contends that Balkans syndrome is largely a manifestation of the growing psychological unease of troops from comfortable, middle-class democracies with even low-risk combat and peacekeeping duties.

"The vast majority of soldiers who serve in the armed forces are not prepared for combat, for military life," Arkin said. "Even if the goals of peacekeeping are humanitarian, the exposures and stresses soldiers face are beyond the ability of governments and militaries to prepare them for."

The lower risk of modern warfare may make soldiers' cancer deaths jump to public attention in a way that didn't happen before the Gulf War. "After the Civil War, World War I and World War II, people suffered these types of syndromes as well," Arkin said. "But they were masked by the fact that some other guy lost his arms, others lost their eyesight and others had no legs."

Cost-free wars are hard for the public to come to grips with. "On a philosophical level, people search for a way to humanly understand warfare," Arkin added. "What image of violence from the Gulf War was most important? It was a video that came out three days after the cease-fire in March 1991 of the beating of Rodney King. People watched that video over and over and over again, because we had just fought a war in which we saw no images of death and none of violence and people needed catharsis."