Although his arrest for growing 60 plants could have landed him in federal prison, Alex Ashcroft was tried in state court and avoided jail, despite his uncle's crusade for tougher federal drug laws and mandatory prison sentences. 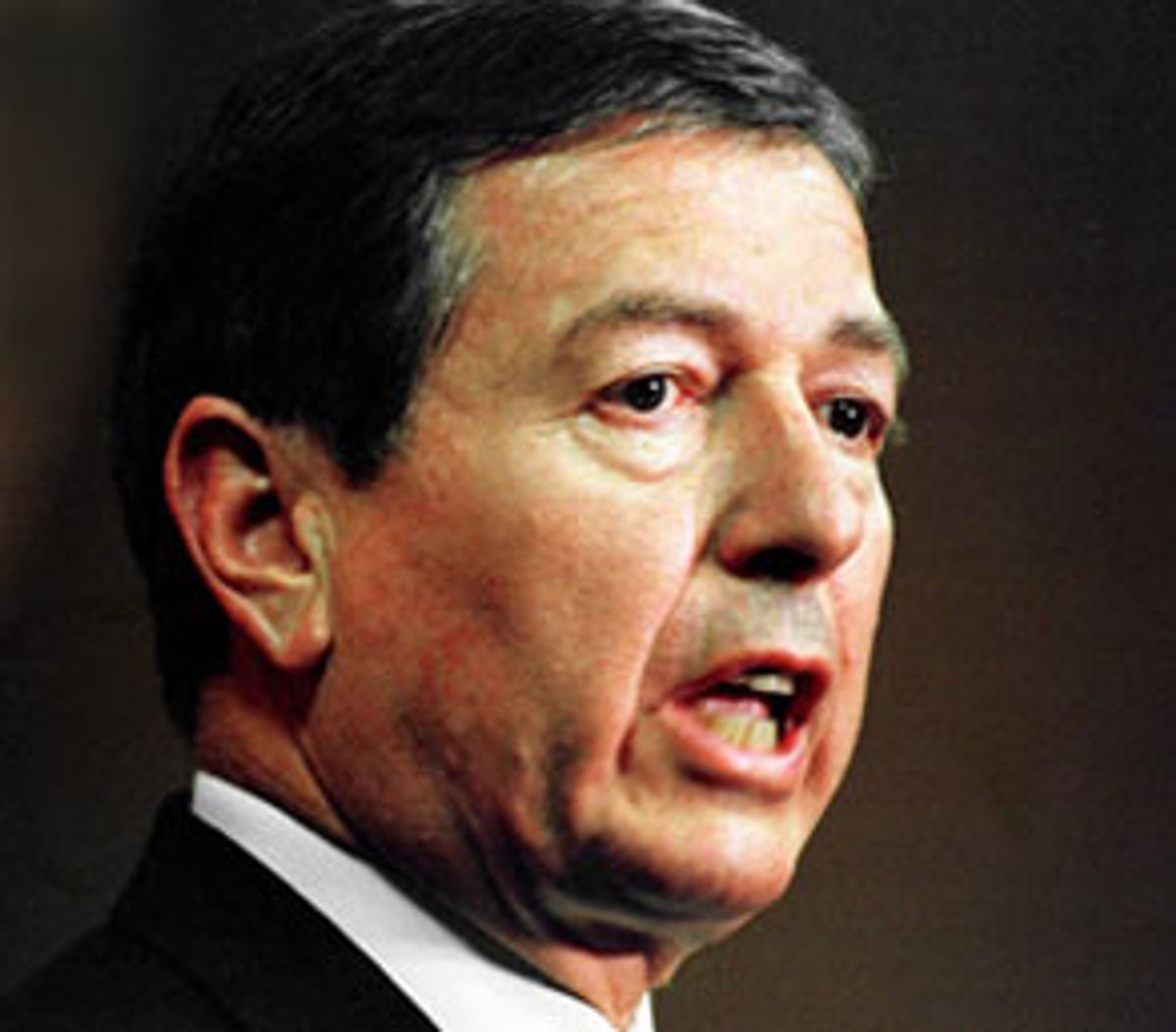 The nephew of Attorney General-designate John Ashcroft received probation after a felony conviction in state court for growing 60 marijuana plants with intent to distribute the drug in 1992 -- a lenient sentence, given that the charges against him often trigger much tougher federal penalties and jail time. Ashcroft was the tough-on-drugs Missouri governor at the time.

Alex Ashcroft, then 25, and his brother Adam, 19, were arrested and charged with production and possession of marijuana after police raided their home in January, 1992. A housemate, Kevin Sheely, then 24, was also arrested. Officials said approximately 60 marijuana plants were found growing in a basement crawl space, and a lighting, irrigation and security system was also discovered.

Although growing more than 50 plants often triggers federal prosecution, and results in jail time -- thanks to federal mandatory minimum sentencing laws Ashcroft fought to toughen as senator -- Alex Ashcroft was prosecuted on a state charge and received probation. His brother Adam did not live in the house and was never prosecuted.

According to Sheely's lawyer, Dan Viets, who practices in Columbia, Mo., Ashcroft tested positive for drugs during his first post-probation drug test, yet still remained free.

"As I recall it, in his first month on probation, Alex had a positive urine test," Viets said. He asserted he has spoken to someone who has recently seen documentary evidence of the failed test.

Reached for comment, Alex Ashcroft's father Bob first denied that his son had failed a urine test, then said, "Anything's possible." Asked about the failed urine test, Alex's mother, Beverly Ashcroft, told Salon, "I have no idea. That's such an upsetting time, it's all a little foggy."

Ashcroft was sentenced to three years in the Missouri Department of Correction for a class C felony involving more than 35 grams of marijuana. The sentence was suspended, and he was placed on probation for three years and sentenced to 100 hours of community service, which he served.

Ashcroft's parents point out that Sheely, who went before a different judge, received even lighter treatment. Sheely's records are sealed, and all Viets would say is that his client was officially "not convicted." Bob Ashcroft says, "The prosecutor was from the other side of the aisle. He did everything he could to prosecute my son." His mother, Beverly, adds, "I think the facts are clear that his uncle as governor certainly did not bail Alex out."

There's no evidence Ashcroft intervened on behalf of his nephew, but Alex Ashcroft's connection to the governor was widely known. The arrest made national newspapers, from the Atlanta Journal-Constitution to USA Today, as well as the local dailies.

Mindy Tucker, a spokeswoman for the Bush-Cheney transition team, said, "Given Sen. Ashcroft's reputation for zero tolerance, I'm sure if he had anything to do with it, the penalty would be much worse. He would have influenced it [the sentence] in the opposite direction." She declined further comment.

The federal law enforcement official who had jurisdiction over the case at the time, U.S. Attorney for the Western District of Missouri Jean Paul Bradshaw II, said he had no knowledge of the Ashcroft case. A Bush appointee, he is now in private practice in Kansas City, Mo.

Others convicted of similar offenses in Missouri have certainly faced tougher punishment. Eric Edmundson, an electrical engineer in Pineville, Mo., served two years in Leavenworth federal prison after his August 1993 arrest for what police said were 51 marijuana plants growing on his property.

Edmundson was accused of selling marijuana, a charge he denies. He accepted a plea bargain to spare his wife, a non-drug user, who was also charged. "You get a bad gut feeling in your heart, when [during sentencing] the judge says 'I'm sorry I have to do this -- no good can come out of it,'" says Edmundson, who now works as a production manager in a circuits factory. He said he's "bitter" that Ashcroft merely got probation after being convicted on similar charges.

The irony of an Ashcroft relative receiving lenient treatment for a drug offense won't be lost on drug reformers. The Drug Reform Coordination Network, a national advocacy group, calls Ashcroft "one of the most hawkish drug warriors supporting some of the most extreme drug war legislation during his tenure in the Senate." He has supported toughening mandatory minimum sentencing laws, and has opposed efforts to end the disparity between penalties for crack and powder cocaine, and to curtail racial profiling.

His nephews' arrests weren't the only drug-related embarrassments during Ashcroft's term as governor. His drug czar had to resign over revelations he'd used drugs himself in his youth.

As for the Ashcroft nephews, their mother reports they are both married and doing well. Alex works in computer installation, and Adam, the younger, is in insurance. "It was a good learning experience," she says. "They're both responsible citizens. It was a stupid college deal that taught the family a lot."