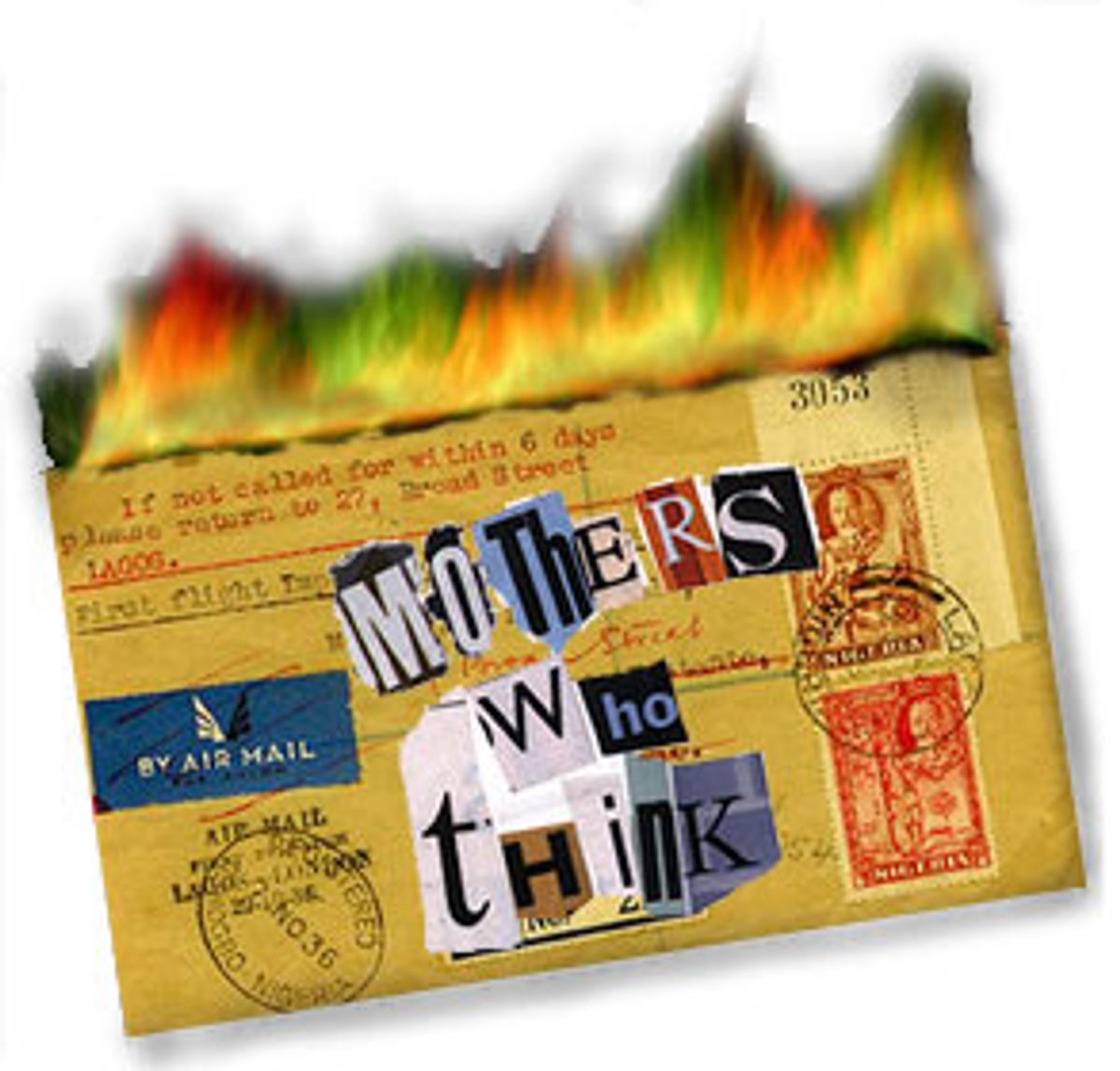 I'm saddened by this article -- but not for the same reasons the author proclaims. I'm sad that she, and many other people, think it's OK for teenagers to have sex at all, that they even have a right to it. Ugh. This makes me ill. I'm so bummed out that I was sexually active from the age of 16. What I thought was "love" was so shallow, so dysfunctional and obsessive and twisted. And now that I'm 34 and married to the man of my dreams, my best friend in all the world, it sickens me to think that my body was touched by anyone else!

Hindsight is always 20/20, but, oh, had but I listened to my mother's advice to wait. Wait! What a concept in this culture of instant pleasure and "do whatever feels good at the moment."

Hurrah to Jennifer Foote Sweeney and her critique of the federally funded study of "virginity pledges." As a nurse working for a family-planning organization, I can tell you that the most powerful thing that we can do for our children is to be honest and accountable, listen carefully, support them in believing in themselves and the possibility of a bright future and give them accurate information and resources. Promoting a right-wing ideologue message as a substitute for health education does them a great disservice.

Your recent article by Jennifer Foote Sweeney is right on target.

I want to know what the anti-abortion hypocrites and the ultraconservative Christian folks tell themselves about oral sex. Do they really want us to believe that they believe that their sweet innocent children abstain from sex until they are married? Did Clinton really commit perjury, or was he just reflecting the mind-set of a group of people who keep oral sex a deep, dark secret while they suck their teeth, shake their fingers and toss their heads at minorities for having so many children out of wedlock? Is this really why so many Americans (and Europeans) wanted to give Clinton a pass on his tryst with Monica Lewinksy?

I agree with the author that virginity pledges are not necessarily effective and can even be dangerous. Kids need to be equipped with the skills to say no when they mean no, but they also need to explore when it might be appropriate to say yes.

As a teenager, I attended a Baptist church that was, to say the least, obsessed with sex. The lesson constantly drummed into our heads, above all others, was that sex should be preserved for marriage. I was pressured into losing my virginity at the age of 16 by an abusive boyfriend. The "no sex before marriage" trope had an unspoken but unshakable corollary in my head: I believed that if I couldn't wait until marriage, I had to eventually marry the first man I did have sex with. Because of this, I stayed with a jealous, overbearing, insecure and abusive boy for a year despite the fact that I hated him and I wanted more than anything to get out.

People make mistakes sometimes in their sexual choices, and teens shouldn't feel compelled to stay with someone they don't love, or who might be actively harming them, just because they happened to have sex.

As the mother of four daughters (two of whom, at age 17 and 20, are sexually active) may I congratulate you on your wonderful rant on the report on teen sexual behavior. It is refreshing to hear an American voice that seems to have some sense about teens and sex. In Europe, the idea of taking a "virginity pledge" -- and the idea that a government would spend money to find out if it worked! -- is laughable. And yet in Europe we have lower rates of teen pregnancy than in the U.S.

I have to admit that I never understood why American girls thought a blow job in the back of a car was no big deal but "going all the way" was. I am not surprised that when the pledgers broke their promise they had unprotected sex -- it follows that you do not plan for something that's not going to happen. It reminds me of the girls who thought that carrying a condom was somehow more sluttish because they preferred to be carried away by the moment. Go figure.

While I agree with most of the author's criticisms of this study, I cannot agree with her assessment of a teenager's readiness for sexual intimacy. Does she remember being 16?

It makes perfect sense that the researchers believe that adolescents are incapable of making informed decisions. They're adolescents -- not adults.

Teenagers are unprepared for the consequences of sex, and that is the whole point of making efforts to promote virginity. As for denying teenagers love and intimacy, both of those experiences do not have to involve sex. Most adults understand this; most teenagers do not.

Perhaps the author needs to take a closer look at her own experiences as a teenager or, better yet, work with a few.

All this talk of "virginity pledges" reminds me of "taking the pledge," an exercise that Catholic kids went through before receiving the sacrament of confirmation during the '60s. (Who knows? They may still do it.)

Kids were asked to pledge not to drink alcohol until they were at least 21 or, better still, forever. It was the "cool" thing to do -- not because it was hip but because it was an easy way to cop some piety points. During the ceremony, one stood up and "made the pledge," promising abstinence from alcohol to the representatives of the church. There would be pictures and smiles and happy tears.

All the girls at my school did it. And yet by the time we were in high school, a mere two years later, beer and strawberry wine were de rigueur on a Friday night after the boys schools' football games, and by prom season, alcohol-induced vomiting had become the thing to do. So the pledges stopped nothing.

Why should people who are engaging in sex be respected beyond the respect they are due because of their personhood? Well, if they are married, they are due respect because they are procreative. If they aren't married, sex is illicit and dishonorable. "Sex education" is a hoax. There is no way for objective instruction to take place with regard to human intimacy. In a classroom, anything less than objective instruction is indoctrination. That immediately puts schools and families at war because of their different goals. Parents have the right and responsibility to educate their own children without interference. Sex education programs for adolescents are invasive and do not respect the modesty or sensibilities of the recipients.

The "why wait?" mentality leads people to make trouble for themselves and others. Teens are generally dependent on others for most aspects of their livelihood. Why not give them a respectable period to get their acts together physically, emotionally and spiritually before they are jettisoned into relationship maintenance? A teacher once told several boys in a high school class that "anyone capable of fatherhood should be able to keep quiet and keep their hands to themselves." The liberal framework keeps trying to disconnect sex from marriage and family, as if it really can stand alone. As long as the true reality is ignored or denied, problems like teens with AIDS, babies, abortions and suicides will plague us.

Although virginity pledges cause more harm than good, they are at least a serious response to a serious problem. It is fair to say that no one should feel guilty about nonexploitative sexual practices. But that does not address that many people aren't farsighted enough to make wise long-term decisions and that these are the people who, in another time, were most helped by traditional sexual morality. There was a reason that people married so early in that period. Unfortunately, that is also why the teens and young adults I've known who try to save sex for their wedding night seem more likely to rush into hasty, ill-advised marriages at a young age. But if we stop enforcing the wisdom of the ages, how can we help people whose passions outrun their foresight?

Virginity pledges and anti-drug pledges are both great big loads of crap. Asking children to proclaim their feelings on complex issues with confusing information (derived from the various school programs and also from the rest of the world) in the form of a pledge is ridiculous. Anyone with children knows that the children will strive to give you the answer they think you want to hear, whether that's "I won't have sex," "I don't do drugs" or "Thanks for the tube socks, they're nice."

I thought the article was well researched and well stated, and described the consequences of these "virginity pledges" quite well. But as someone with a Ph.D. in economics, it struck me that you missed the biggest flaw in the government study you cited. That flaw is what we in economics call a "self-selection bias."

Simply put, assuming the data in the study are valid (which I will accept for the sake of argument), one cannot easily determine the direction of causality. That is, the government researchers believe that these pledges cause "virginity" (again, using their definition). One reasonable alternative hypothesis (there are others, of course) is that other factors (e.g., the religious beliefs instilled in the child by the parents) cause the child to hold a set of moral standards consistent with virginity before marriage, which causes them to make the pledge. Similarly, if the parents hold these beliefs strongly enough, they may coerce their children both to maintain virginity and to make pledges to that effect.