Plus: On the riveting courtroom drama "100 Centre Street," legendary director Sidney Lumet returns to TV with a bang -- and a lunch-break tumble or two. 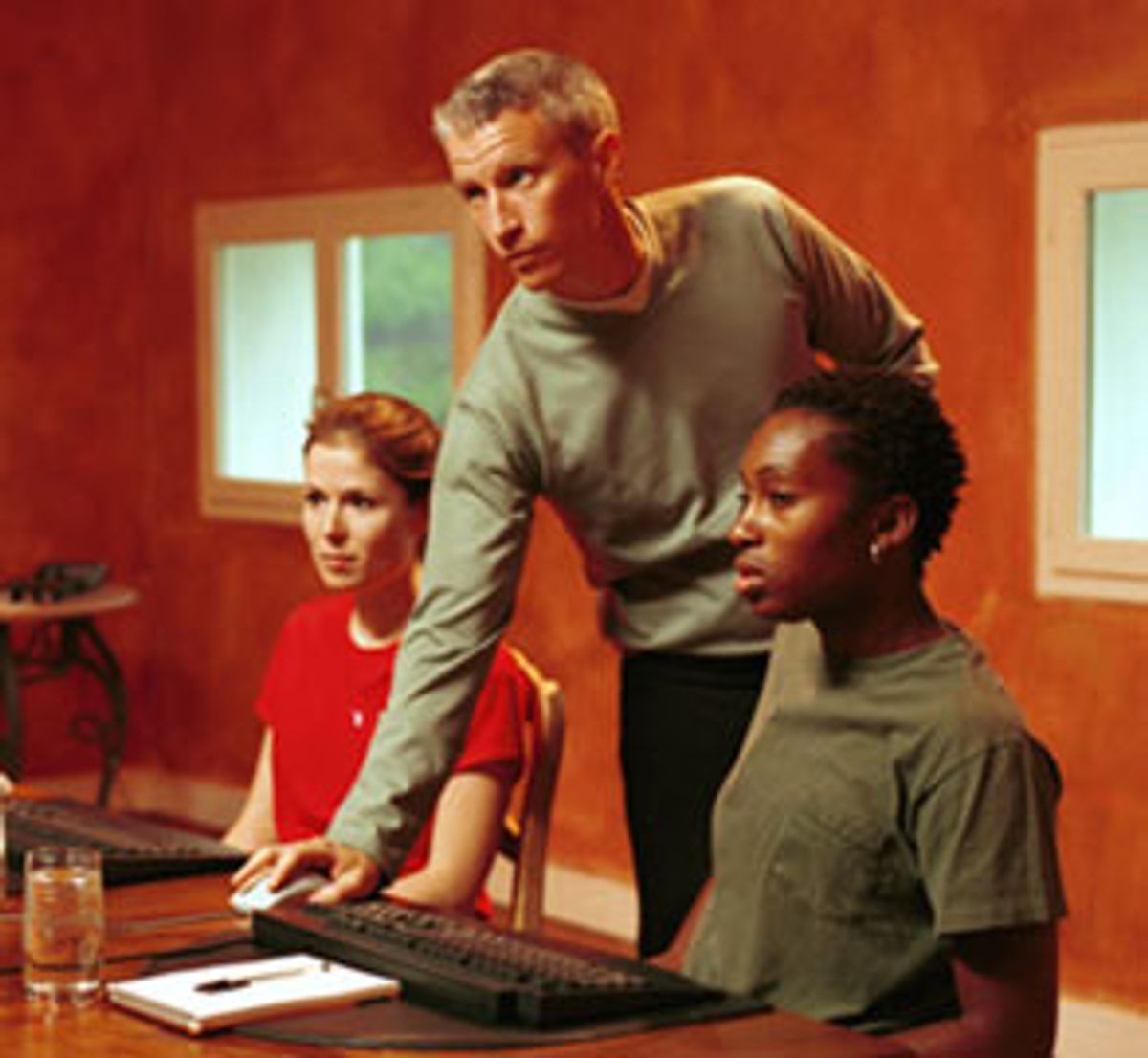 If you never saw "Survivor," you might think ABC's new reality series "The Mole" is sort of dorky-cool. Ten players of varying ages and backgrounds are whisked off on a 28-day, globe-spanning "mission." They perform a series of challenges for money, which goes into a communal pot.

But one of the players is a mole, planted by the show's producers to sabotage the game. Every third day, the players take an online quiz about how much they think they know about the mole. The player who gets the most wrong answers is "executed." Well, not really -- they're just escorted into a black van and taken away to the land of Sonja and Mega, where all reality show losers go to await the commercial offers that never come. Anyway, when there are three players left (two legit ones and the ringer), there's a final quiz; the winner takes $1 million.

The strategizing involved in winning "The Mole" (which premiered Jan. 9 and is running for nine weeks) is not unappealing, particularly if you're well-versed in the board game Clue -- if you think you've figured out who the mole is, you need to send other players down a, well, mole hole by diverting suspicion to someone else, while keeping yourself alive until the final round.

But the big problem with "The Mole" is that everything about it echoes "Survivor": the rigged suspense, the over-dramatic editing, the great solemn dufusosity of host Anderson Cooper as he presides over the tribal council -- oops -- execution.

So deeply embedded in our consciousness is "Survivor" that you even find yourself looking for surrogate castaways among the "Mole" players. Crusty retired cop Charlie is Rudy (with a little B.B. for good measure); weathered jockette Jennifer is Sue; crafty gay helicopter pilot/lawyer Jim is Richard. You get the picture.

Unfortunately for "The Mole," "Survivor" got there first, made an indelible mark and crossed over from a freakish curiosity to a cultural obsession akin to "Dallas" or "Dynasty." Last summer, "Survivor" was a trashy guilty pleasure, with larger-than-life characters, enough suspense to keep you hooked and an irresistible kitsch factor that inspired an intense love/mock reaction from like-minded fans.

In light of all that, it's hard to regard "The Mole" as anything but a rip-off verging on parody -- I mean, Cooper, a former ABC News correspondent (ha!), does a better Jeff Probst than Probst. And in the premiere, the goopy montage of Scenes From Happier Times that ran after first victim Manuel (a Mexican-American single dad who haplessly came close to botching two group tasks) got the hook was corny beyond belief, suggesting that "The Mole" has more in common with the lugubrious and stuporific "Big Brother" than the unsentimental and supple "Survivor."

As for "Survivor: The Australian Outback," which is set to premiere after the Super Bowl on Jan. 28, it looks like its toughest competition will be itself. The second installment faces a difficult challenge akin to being a step-parent, or Rick Schroder on "NYPD Blue."

It mustn't erase the memory of the first series and the original castaways, but instead complement them enough to let viewers know it's OK to get emotionally involved with the new guys. I think it's already working: Judging from the commercials for "Survivor II," I might have found my new Sue -- beefy corrections officer Debb. Just one thing, though -- is it possible for someone to be "voted off the outback"?

OK, so you've had all you can stand of reality shows like "The Mole" and Fox's inane "Temptation Island." And you're fed up with crummy midseason network sitcoms like NBC's "Three Sisters" and Fox's "Grounded for Life." Well, my friend, that's why God made cable. A&E's new (fictional) courtroom drama, "100 Centre Street," executive produced by veteran filmmaker Sidney Lumet ("Serpico," "Network"), demonstrates the modest pleasures of a series imaginatively cast.

Set during the night sessions at New York City's Criminal Courts Building, "100 Centre Street" chronicles the vagaries of turnstile justice from the perspective of judges, public defenders, assistant district attorneys and defendants (with cops, pols and the media braying outside the gates).

"Centre Street," which premiered Monday, is a thoughtful, sturdy drama that fits perfectly with the "Law & Order" reruns A&E airs seemingly around the clock. Like "Law & Order," "Centre Street" is talky and a tad earnest, but there's something satisfying about its un-hipness. Lumet, who directed live TV drama in the '50s, wrote and directed the two-hour pilot. He knows how to spin a good hard-boiled courtroom story keeping the pace brisk and the talk plain, and showcasing the sort of offbeat actors who don't usually get a shot at network prime time.

The underused Alan Arkin does terrific work as the show's centerpiece, Judge Joseph Rifkind, a liberal jurist perceived to be soft on crime by his critics, who call him "Let 'em go Joe." Rifkind, a courtly gentleman with a taste for bebop, is currently fighting for his judicial life after the sort of tragic misstep the tabloids love -- he dismissed a case against a young thug, who immediately went out and killed a rookie cop. When Arkin's Rifkind is on the bench, his manner is brisk and his wit is dry; off-duty, he's a dignified man caught in murky political waters and possibly in over his head.

The show's other casting gem is the regal LaTanya Richardson as Rifkind's colleague, Judge Attallah Sims, a conservative with a courtroom manner so unyielding she makes Judge Judy look warm and fuzzy. Judge Sims is an incredibly juicy role, easily the best current spotlight for an African-American actress in prime time, and Richardson eats it up. Richardson and Arkin have an easy rapport as two people with little in common who nonetheless find something in each other worthy of admiration and affection. In this age of phony bipartisanship and TV pundits shrieking implacable opinions at one another, it's a relief to see polar opposites like Rifkind and Sims discussing philosophical differences like grown-ups.

Arkin and Richardson are backed by a handful of younger supporting players, including Paula DeVicq ("Party of Five") as a mousy rich girl who wants to make it as an assistant district attorney, Hank Azaria look-alike Joseph Lyle Taylor as blue-collar ADA Bobby Esposito and Manny Perez as married, womanizing Legal Aid attorney Ramon Rodriguez. But "Centre Street" is too classy an act to make the "Gideon's Crossing" mistake of dissing the old fogey stars by pushing the hotties (such as they are) out front.

And viewers who trust in Lumet's old-fashioned storytelling sensibilities are rewarded in the second episode Monday with a lunch-break tumble between Rodriguez and a flirty ADA (the radiant Sarita Choudhury) that generates the furtive heat of one of those great, less-is-more bedroom scenes from an M-rated '70s flick. It puts the skanky calisthenics of Fox's "The Street" -- or, better, "Temptation Island" -- to shame.