How do you enjoy traveling when all your companions want to talk about Disneyland? 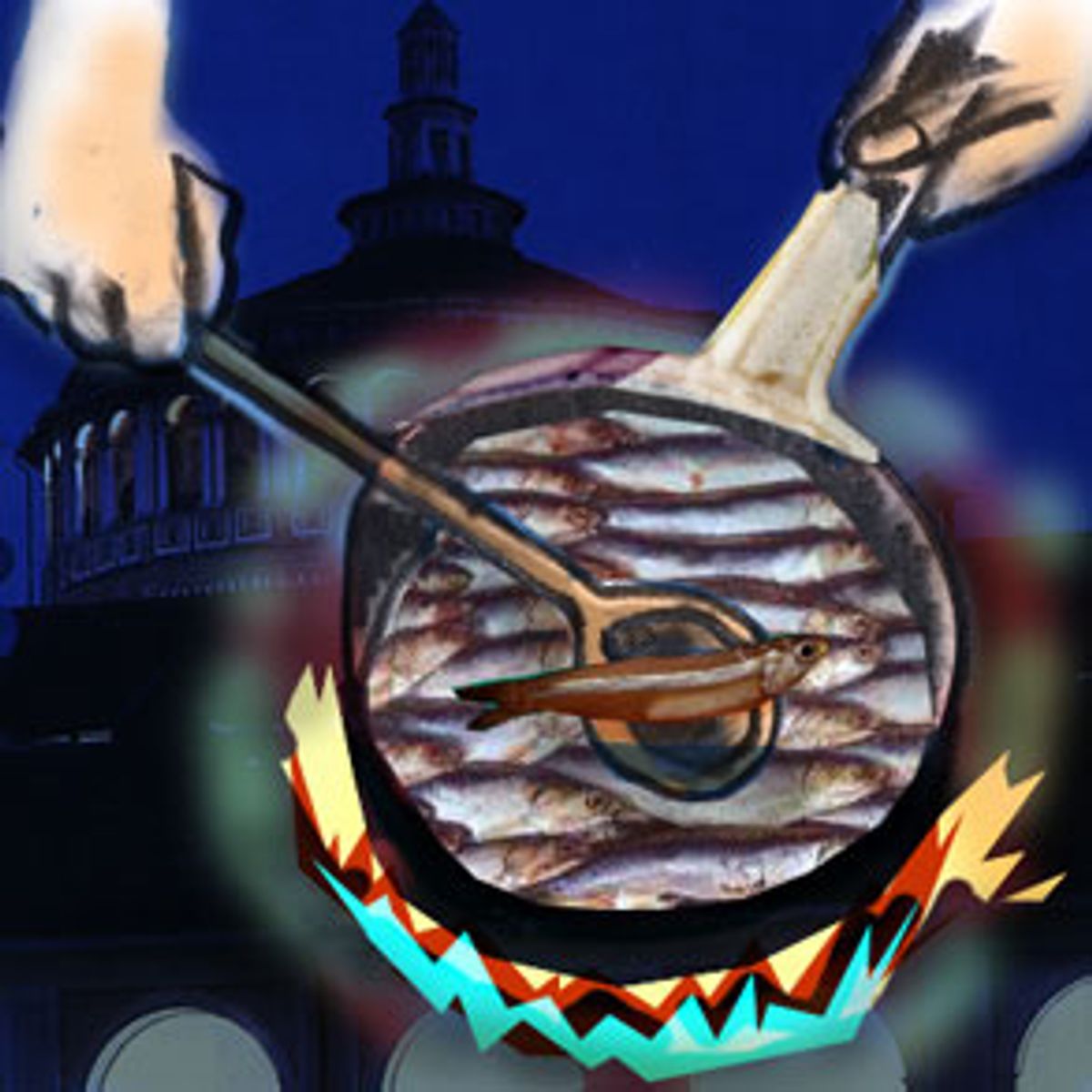 I am gutting a fresh anchovy in a kitchen in Umbria as if my happiness depends upon it. And it does. My fingertips are red with blood and muck as they remove the entrails. Sliding from the wide-eyed silver fish head to its tail, I feel the nubby, sharp firmness of its spine as I lift the skeletal remains away from the flesh and smell the salt of its sea perfume. This earthy, tactile undertaking is like a faith healing, grounding me, for this moment, in Italy.

It has not always been so on this Italian cooking school adventure shared with other travelers. Thanks to the magic carpet of conversation, we've tromped through the jungles of Indonesia. We've visited the Sultan of Brunei. We've toured the vineyards of France. We've seen the latest architectural wonders in Bilbao, Spain. Finding myself held captive by my garrulous companions and the stories they need to constantly tell, I feel I've been everywhere but here, the Italy I had traveled so far to savor.

I'd come for a weeklong cooking session, assuming it would be my most intimate encounter yet with the country I loved. I would not only be eating the local foods but shopping for and preparing them. But food and cooking in this crowd soon became a form of self-defense, a way to mute my companions' streaming travelogues and salvage my trip, a way to connect to the here and now.

I've always considered food to be a fundamental mode of transportation. As a child, it helped me escape the Velveeta vacuum of the suburbs. My family never had a reason to leave our native state of California. Who needed the world when we had Disneyland?

Food was my way of visiting distant places. As soon as I could read, I began looking for recipes that sounded like they came from far, far away. Supermarket frozen tamales and canned chow mein wouldn't cut it. I searched for exotica in cookbooks and magazines and on the back of pasta packages. As soon as I could reach the top of the stove I began cooking up my discoveries. The results helped me imagine what life was like elsewhere. Cinnamon in the spaghetti sauce was a warm, friendly note from southern Italy. Gâteau was a cake from France, not a box. Rumaki said Hawaii, pfeffernuss was a comforting cookie coveted in the cold of northern Europe's holiday season.

Adulthood allowed me to indulge in my travelin' jones. I winged my way across oceans to eat dishes in the place of their origin. My motto became travel globally, eat locally. I enjoyed momos in Katmandu, chestnut crepes at the Paris flea market, Belgian frites in Brugge. I came to love Italy in great part because of the food, and I returned repeatedly over the years to Tuscany, where I found the perfect combination of melt-in-your-heart landscapes and memorable meals. When the opportunity arose to explore cooking in Umbria, a place I'd been told was like what Tuscany "used to be," I took it.

The only catch was that it was a group experience, and I'd forgotten how challenging such a situation could be. I could expect to experience not only the culture of my destination but also the baggage brought along by my fellow travelers -- strange personalities mixing in confined spaces. They might not share my love of solitude, and silent contemplation of my surroundings. They might not even share my passion for food and Italy. They might want to talk about something other than St. Francis' life in Assisi or the countless regional varieties of pecorino. They might want to talk about something else altogether, like a life spent racking up frequent-flier miles and initially entertaining anecdotes. In small measure it might have added spice to the trip, but ladled liberally at every meal and waking moment it gave me a queasy sensation that I was everywhere except where I wanted to be.

I'd faced the phenomenon before of travelers trying to put distance between themselves and an adventure in process. While touring China with a high school marching band, I was beside myself with the thrill of actually eating Chinese food in China, while the adult chaperones talked at length and longingly of the small local restaurants they enjoyed back home. Many of the teenagers simply couldn't face another plate of mixed mystery vegetables and meat with rice. They wanted hamburgers and hot dogs. As we toured the Forbidden City, some of them hung off one another singing "Take Me Home, Country Roads." One girl brought her eating disorder to the Beijing banquet of Peking duck. While I reveled in the authenticity of the experience, she fled to the bathroom, followed by a flock of adults begging her to eat. Concern for her fate lightened when she was later discovered scarfing peanut butter and crackers in her hotel room.

When I went trekking in Nepal I opted for an Australian tour group instead of one with Americans. I didn't want to hear my fellow countrymen's complaints if the medieval Hindu kingdom wasn't up to Disneyland's standards. The Aussies were happier, better-natured and less prone to whining than the Americans. They always seem to be thrilled to be out of their own country. (Why not when they get to vacation for months at a time?) But according to the group with which I was traveling, television was Australia's favorite pastime and Paul Hogan its highest artistic achievement. The lack of television on the trail -- at the time, there was no TV in the entire country -- seemed to make them a little desperate. They would calm themselves by reciting Hogan's complete oeuvre, each one contributing favorite bits as they floated to mind, providing our entertainment for entire evenings around the campfire. They conjured up his spirit as if it were a protective shield.

I wonder if travelers' need to talk of home and other places doesn't arise from a fear of losing themselves to the present journey. Rather than absorbing the new place, they fear they'll be absorbed by it. I think of the two former mainlanders I encountered in the legendary paradise of Kauai. One was a man selling bananas and pineapples from a roadside stand; the other was a blond woman who tried to sell us a time share while taking our order for sushi. Both had an anxious look in their eye as they told their own stories of innocently arriving on the island, becoming captivated by its charms and deciding to cut loose from their previous lives and stay. They made me wonder if the people who have truly found happiness in a new place keep themselves away from tourists, the unsettling presence of those who might still be seeking paradise or know it to be elsewhere. As for people who are constantly on the move, like those I met in Italy, I wonder if they travel the world in search of the place in which they can stay put, or travel in fear of one day actually finding it.

In Hawaii I could walk away from the banana stand and the sushi shop. In Nepal I could walk ahead or drop behind the Hogan stories, or on a layover day go bird-watching solo and possibly encounter, as I did on one such outing, a monkey. We shared no words, just a long, curious stare, a lingering moment to wonder about our separate lives.

In China I'd wander away from the group to take photographs and explore on my own. I found that in the less-traveled areas we visited, I was as much a curiosity to the locals as they were to me. As I was unable to speak the language, gestures had to do. One man, who seemed stunned by the sighting of a Caucasian in his local municipal park, offered me a peach. I later learned it was a symbol of immortality and, when given between friends, a sign of affection.

Food continues to provide me with a means of both connection and escape. In Nepal slaughtering a live, free-range chicken (I don't know that they have any other kind) for dinner temporarily knocked Paul Hogan off the conversational charts. To this day it remains the best chicken I've ever eaten.

In Italy I became happily lost in cooking. A few of the quieter members of the group and I silently filleted fresh anchovies and stuffed squash blossoms with slivers of five-milk cheese, then dipped them in batter and fried them in the extra-virgin olive oil we'd seen being pressed that morning. Discussion ran to the here and now of the fig sausage flavored with fennel we sampled and the best technique for scrubbing clams for fettuccine con vongole. Talking about the tastes and tasks at hand became a delicious avoidance ritual.

The recipes for fried anchovy fillets and stuffed squash blossoms provide both the tactile distraction of labor-intensive cooking and the foundation of a good grazing menu. My suggestion is to serve the dish when you feel you'd rather not face your company around a table one more night. Pass plates in the living room while watching TV or perusing that gorgeous pile of coffee-table books. Add a well-chilled pinot grigio, or similar light and snappy Italian white wine, and practice, between bites, the fine art of changing the subject.

Nancy Spiller is a Los Angeles-based writer specializing in food and travel whose work has appeared in the Los Angeles Times Magazine, Cooking Light and Town & Country.