Secrets of the world's No. 1 adult film star, or why I'll never clean my upholstery again. First of two parts. 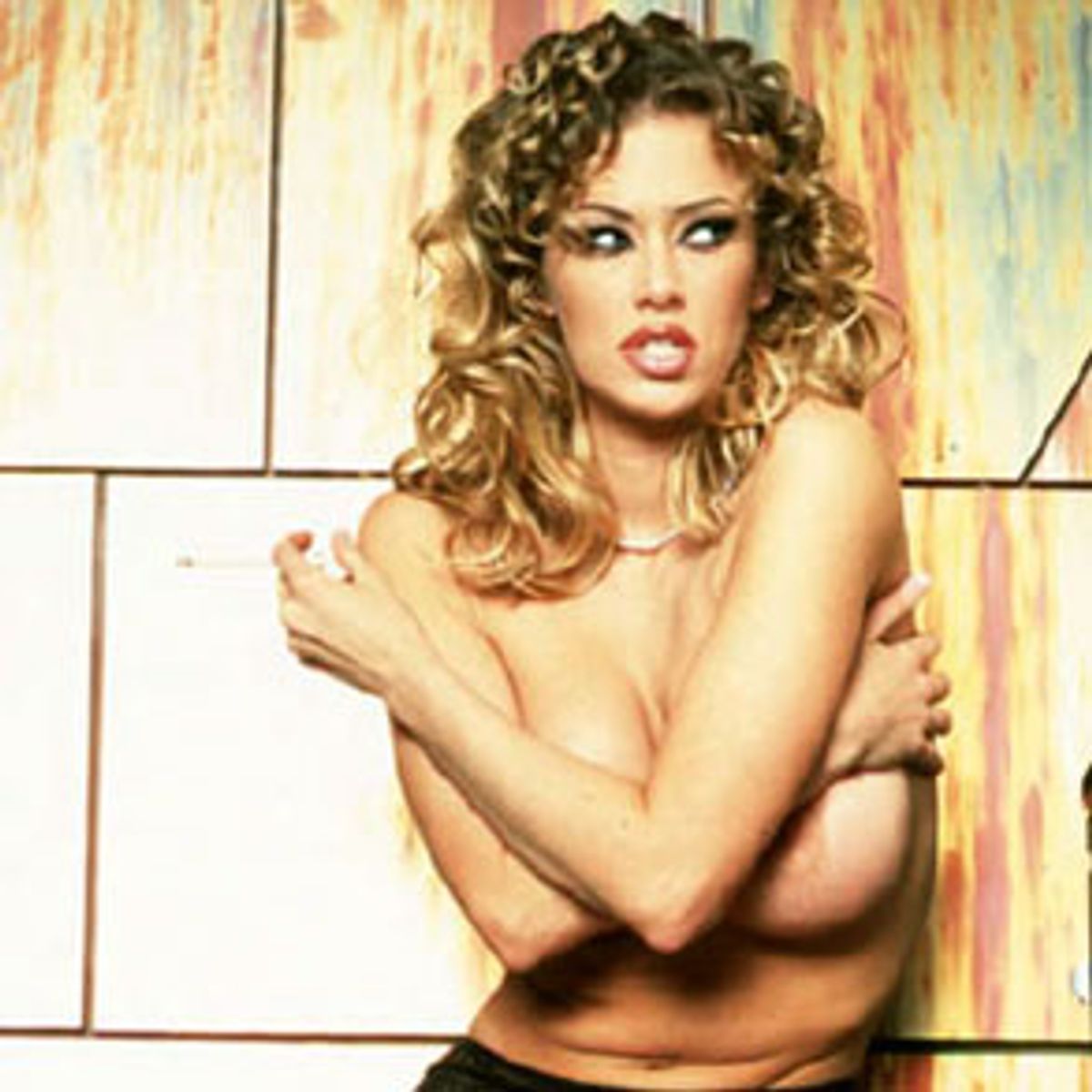 How do you make Jenna Jameson come? You call her. In my case, I called her and she came all the way to New York to watch her most recent movie with me and two female fans.

I had been out one night with two friends who fancy themselves so fabulous that I thought it would be fun if they met each other: Christina, a 25-year-old journalist, and Louisa, a 30-year-old television producer. I turned away for a moment, then heard:

Louisa: "I thought I gave good blow jobs, and then I saw her! All that saliva!"

Christina: "Do you like her better as a blond or a brunet?"

Now a few questions pop up when the world's biggest adult film actress drops by. What do you wear? I put on a dark shirt and jacket for the same reason Christina donned a sleeveless top -- to avoid overt sweat. What do you serve? We ordered sushi -- insert your own joke. And how do you make small talk? Male friends had their suggestions. Louisa's ex and his buddies came up with a list of queries for Jenna, starting with "What does a double penetration feel like?" Christina's brother told her to pounce if Jenna made a pass at her.

But she was utterly approachable. She showed up with just one companion, a physical therapist/gal pal named Tracy, who set the evening's cheerfully explicit tone by announcing, "I'm Jenna's bitch!" And Jenna answered every question we put to her in a throaty, conversational tone, not in the soft girlie voice she uses in her movies.

Like many professionals in their 20s, Christina and Louisa are sex-positive feminists, women who see pornography as an extreme but not inevitably inauthentic representation of the pleasure, power and entertainment that sex can carry while remaining leery of its nastier incarnations. Louisa had rebuffed her boyfriend's attempts to get her to watch porn until he popped Jenna's "Flashpoint" in their VCR. "I have this thing about firemen, and the next thing I knew everyone's having sex, and I saw Jenna," she explained. "She had an amazing power that came across on-screen." Christina first caught Jenna on Howard Stern's program. "I was like, 'Who's this?'" she recalled. "She was smart, she was sassy, she was in control."

They wanted to see whether the Jenna they admired, with her patent enthusiasm, was real or a cover for a latter-day Linda Lovelace -- coerced, abused, recanted. Once Jenna reassured them, she set off a chain reaction of affinity, even identification, and the women started gabbing about their common problems -- men, money, menstrual cramps. It was like "The View" with vibrators.

"Good for you," Louisa said.

"If you're dating someone, do they get jealous?" Christina asked.

"It's really hard to be committed to anyone if you're having sex with other people," Jenna replied. "I always end up having to make a decision between the guy and my movie, and that's sad. But it's a double-edged sword. If someone said, 'Good work, honey, go get fucked,' I'd think he must not really love me. I try to go out with guys who are not in the industry, who like me because of who I am. But the minute they fall in love with me, they want to -- "

"Take care of you," said Louisa.

"Have you for themselves," said Christina.

"Do you have a lot of female friends?" Christina asked.

"No, just Tracy, my publicist and my assistant at Club Jenna, that's all," Jenna said. "It's very hard to find normal chicks."

"How long do you think you're going to be doing this for?" Louisa asked.

In addition, Jenna dances at strip clubs two weeks of every month -- "you should see the carnage" -- raking in about $8,000 a night in appearance fees, tips and merchandise sales. And she sells tapes, sometimes auctioning the right to customize them on eBay. "I'm on the road all the time, and I talk to my fans, and they tell me what they want," she explained. "I can shoot a little video in 15 minutes and charge $2,000 for it."

"You trust your money manager, I hope," Louisa said.

"I hooked up with this guy, and he's the best," said Jenna. "He pays all my bills, and I keep track of everything."

"When you're having sex on film, do you come, or do you just kind of shut off part of yourself?" Christina asked, finally careering the conversation toward sex now that Jenna's IRA seemed to be in capable hands.

"It depends on the day," Jenna said. "I'd say 25 percent of the time. It's always pleasurable, because I get off on being in front of people and everybody watching me, so I'm wet and everything. But having an orgasm is a concentration thing, and the scenes stretch from one to three hours."

One to three hours? I thought.

Christina and Louisa also wanted to know about the risks of having promiscuous sex for a living. Jenna works with just a small group of men who wear condoms in all penetration scenes, and she undergoes testing for HIV every month. "It's always in the back of your head," she said. "But to tell you the truth, I trust the people in the industry more than I would just going to a bar. If something goes wrong down there, we're not going to be able to pay the rent. It's when you get someone who says 'I just want my $600' that it can get ugly really quickly."

"When a guy's grabbing a girl by the hair and she's like, 'Yeah, fuck me,' I think that's hot," Jenna said. "But I've been seeing these videos where these girls, they have this look on their face, and you can tell that they're not enjoying what's happening to them. That's when I say, 'Enough.' When I'm shooting my movies and the girl looks like she's out of it, we're done. I'm sure there are guys out there who are like, 'Oh, yeah, she deserves it,' but that is not the market I'm trying to hit -- at all."

Peter Keating is a writer in New York.