Where the boy bands aren't

The Backstreet Boys' new album is a relative flop. Is the teen pop era over? 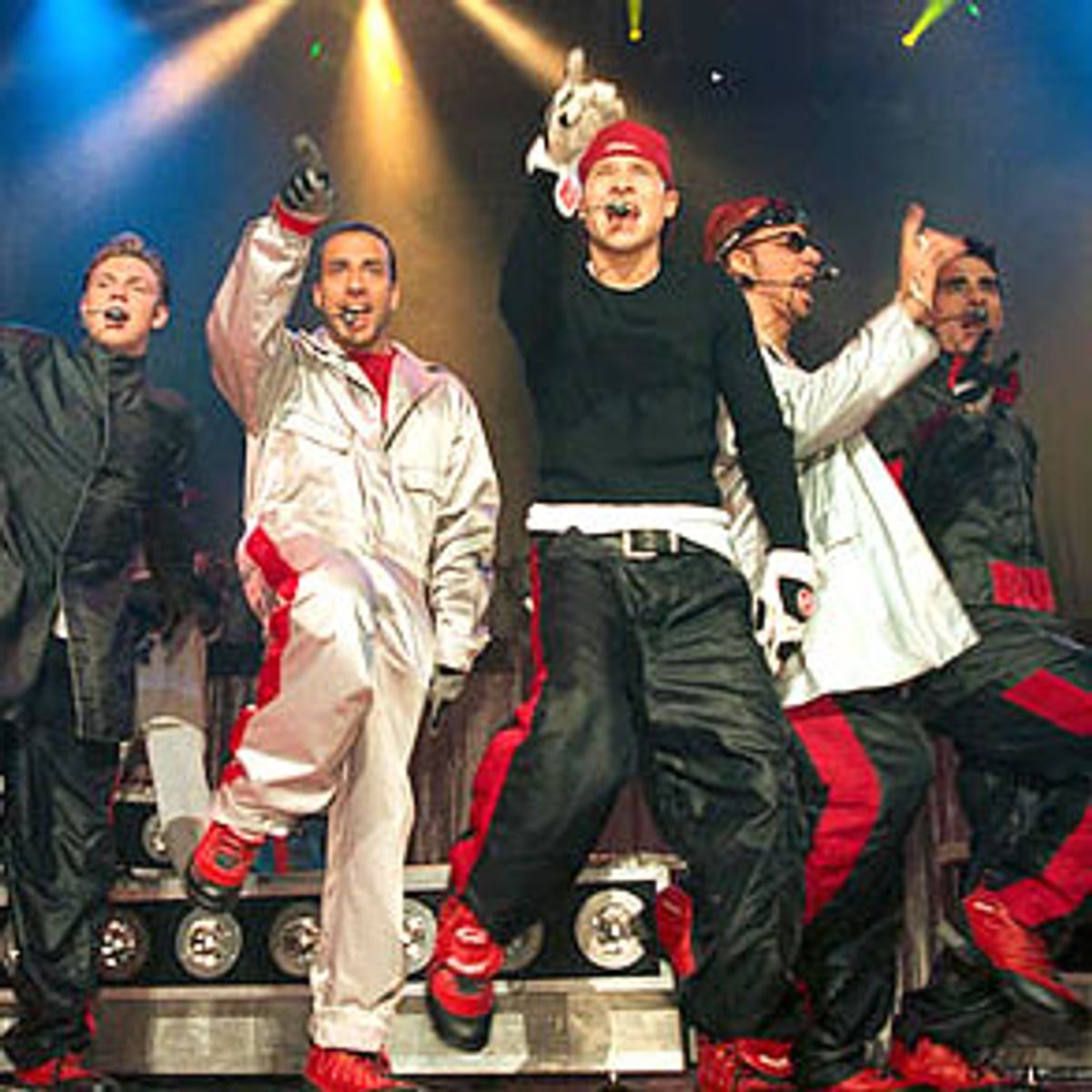 The music industry entered the new year facing languishing sales and a cooling economy. Now it's got a new problem:

The teen pop craze may be over.

For four years, bands like 'N Sync, the Backstreet Boys and "teen queen" acts like Britney Spears have sold tens of millions of records and brought a new generation of teenage girls into the joys of disposable consumerism. But things are now changing. The prime indicator is the latest album by the Backstreet Boys -- the harmonizing boy-band sensation whose two previous releases, including last year's "Millennium," set monumental sales records. But the band's follow-up CD, the wildly hyped "Black & Blue," has skidded down the charts.

Yes, it has sold 4 million copies -- mostly thanks to its Christmastime release. (One of those million came in its first week of sales alone.) Yet the album only hung onto the No. 1 spot for a single week before getting booted by the original boy band, the Beatles, whose greatest-hits package, "1," has remained in the top spot for two months running.

With holiday shoppers no longer stampeding stores in search of stocking stuffers, "Black & Blue" has fallen to No. 15 from No. 2 last week, according to SoundScan, which tabulates music sales industry-wide. The act's previous albums camped out in the Top 10 and sold hundreds of thousands of copies a week for months and months on end. But for the week ending Jan. 7, "Black & Blue's" seventh week in stores, the album sold 72,000 copies.

Sure, there are a lot of record executives who would love numbers like that. But it took the BSB's "Millennium" 11 months after its release to sell just 72,000 copies a week.

If "Black & Blue" continues to slump this week, it's possible there will be no teen title inside the top 20 of Billboard's album chart. (The next closest contenders, 'N Sync's "No Strings Attached" and Britney Spears' "Oops! ... I Did It Again," both released more than eight months ago, are hovering in the low 20s.) When was the last time that happened? If you count the Spice Girls as part of the distinct, teen-targeted pop movement, you'd have to go back nearly 200 weeks -- to the very beginning of 1997 -- to find a Billboard album chart without a Top 20 teen title. Take out the Spice Girls and you'd still have to go back to November '97, or roughly 170 weeks ago, to find an album chart that was teen-free at the top.

So what happened to the Backstreet Boys? The band is coming up against the music industry's unbendable rule: Acts need hit singles to sell albums. "Black & Blue" has not been able to deliver. The first single, "Shape of My Heart," barely cracked the Top 10 on Billboard's Hot 100. Even though it remains in MTV's Top 10, the single is currently languishing at No. 24 at Top 40 radio, the mass medium that drives most pop CD sales.

(Artistic quality is never a prime concern of the industry -- or consumers -- but, for the record, it doesn't help that "Black & Blue" is a virtually unlistenable collection of overproduced, watered-down R&B-flavored pop, lacking any of the small pleasant surprises its BSB predecessors offered.)

Besides the troubles with the Backstreet Boys themselves, one has to remember that the music business revolves like clockwork around creative cycles; teen pop's time at the top may have simply expired. A pop backlash is now brewing, veteran Top 40 consultant Guy Zapoleon says -- just like the one that erupted on the heels of the last Debbie Gibson, New Kids on the Block and Tiffany teen tidal wave 10 years ago.

Look closely and you can see other evidence of the backlash as well: Faith Hill, a more mature and traditional crossover country star, blew away Britney Spears at both the People's Choice and American Music Awards, for example. Zapoleon predicts that, with listeners tiring of the syrupy teen fare, top 40 programmers will turn to more urban-sounding offerings by acts in the Destiny's Child and Pink mode, as well as more of a rock sound from bands like Creed and 3 Doors Down.

But without the pure pop to bridge the gap between the urban and the rock extremes, Top 40 will soon see "the beginning of the end of its healthy rebirth cycle," says Zapoleon. In other words: "the doldrums."

As if the record labels need more bad news. Album sales last year rose by just 4 percent. That's down from 1999's six-point percentage gain, and 1998's nine-point bounce. (The verdict is still out on what effect Napster, the free music-sharing service decried by the industry, is having on the music biz. Last spring Napster's partisans argued the phenomenon would fuel double-digit increases; that has definitely not happened.)

Can the boy bands bounce back? A test may be O-Town's debut, on Clive Davis' new label. (O-Town is the boy band created by ABC's reality show "Making the Band.") If, a month after its release, the album is not selling strongly, it could be curtains for teen pop in the marketplace -- and the labels may be stuck with stables of overchoreographed boy bands and girl singers arriving too late for the game.

"At the major-label presentation last fall, we were subjected to boy band after boy band," says Carl Singmaster, owner of Manifest Records, with seven stores in North and South Carolina. He's referring to the annual dog-and-pony shows labels put on for retailers to showcase untested acts.

"It was disgusting how they were trying to stoop so low at this late date to get into the game. It just showed a total lack of vision. It's all about the short term."

Short term. Isn't that what the music business is all about?