My 70-year-old dad and his model wife are looking for a "little miracle." 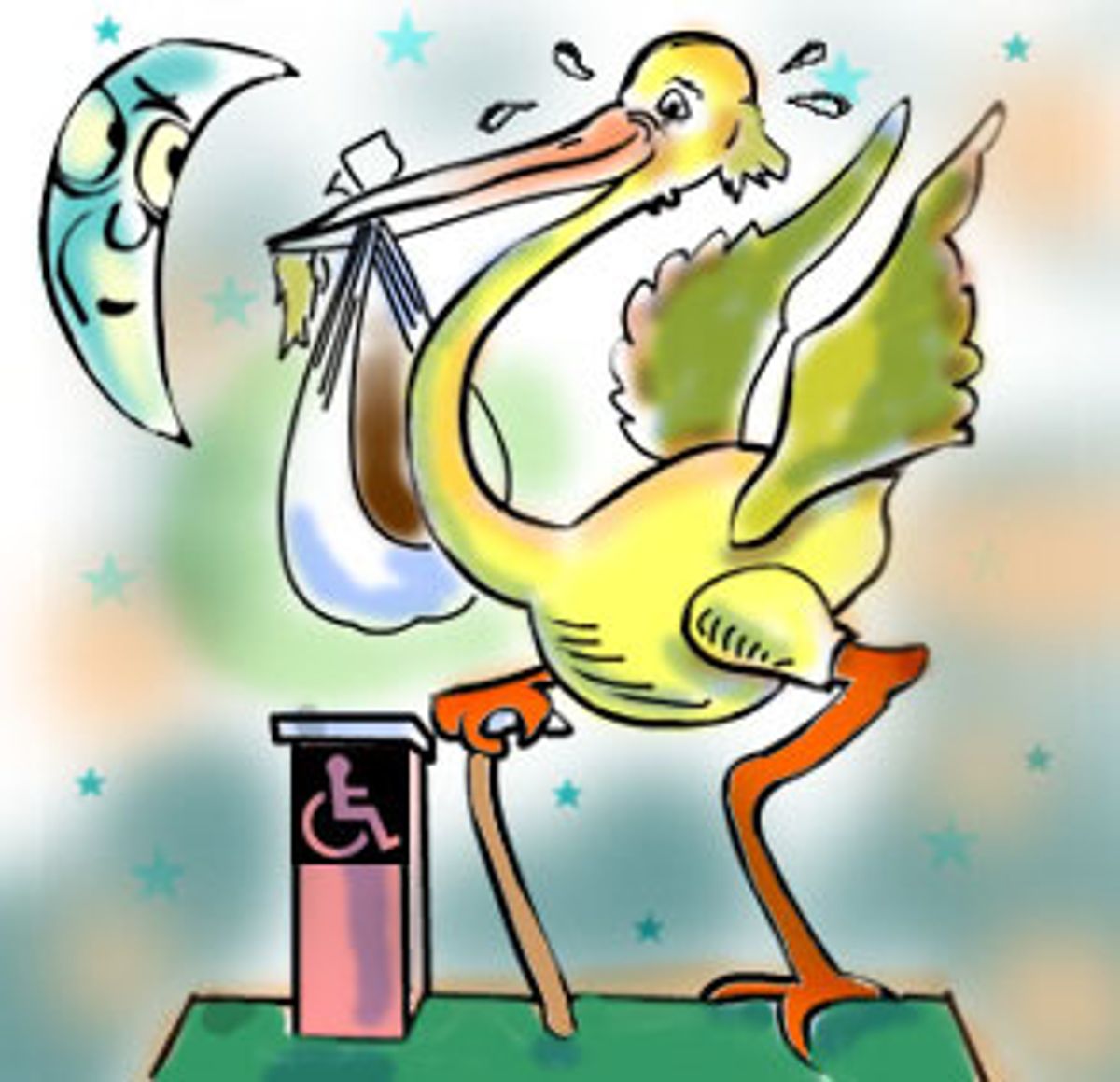 I've come to the conclusion that fertility questions are much like zoning issues. Everyone's opinion is entirely personal and completely dependent on the person's proximity to the egg in question.

Take my 70-year-old dad and his 40-year-old new bride, my blond bathing-suit model stepmother. She is absolutely obsessed with having a baby. She has seen all her friends marry and have children, seen the love in their eyes, their devotion to their "little miracles." She feels her life is incomplete without its very own little miracle.

My father, who was adamantly opposed to the notion of becoming a father at 70, has been softening. If he loves her, he tells me, he would do anything to make his bride happy. After all, his only child (that's me) has given him so much joy, how could he deny this pleasure to his lovely wife?

Besides, he says, age is just a number. His is a generation of overachievers that refuses to accept any limitations. (So is his wife's, come to think of it.) These are people who make tons of money and want to buy their dreams. They certainly have no intention of allowing nature to stand in their way. They subscribe to the good ol' American point of view that if you throw enough money at a problem, you can solve it, or at least it will go away. (Unfortunately, things are more complicated than that -- take Haiti or the Star Wars defense system or AIDS. But let's not be negative.)

While on the one hand my stepmother would not consider an abortion because she believes it is not God's will, she would not hesitate to create life artificially. That, she says, is completely different. The idea that perhaps 70-year-old men should not be fathering babies, that it's not natural, is not discussed. Wealthy fathers freeze their sperm and moms hire surrogates. Celebrities make warm and fuzzy news with their stories. Take Cheryl Tiegs and Norman Lear. The only limitations to reproduction are those in your mind -- or your wallet.

These are folks who do not accept wrinkles or saggy boobs -- aging in all its repellent forms is rejected. "Defy it!" is the motto and Melanie Griffith is the heroine. My stepmother wouldn't miss her bimonthly appointment for botox shots, which soften the permanent scowl between her eyebrows. Prozac for the mood. Liposuction for the fat. Collagen for the lips. And saline, not silicone, for you-know-where.

So my stepmother launched her efforts with hormone injections and egg harvesting. Then came Dad's end of the bargain. The doctors went in there for almost two hours and couldn't find one spermatozoon, not a one. Because his testosterone levels were within the normal range, no one suspected they would not be able to find a single viable male gamete. Just a couple would have done. But 30 years after his vasectomy, all the doctors could find was scar tissue. His balls were shrunken like those of a 70-year-old man.

"We didn't think we would be shot down so early on in the game," said Dad.

Would she settle for a miniature dachshund? A little dog, one that she could pick up and cuddle? Maybe dress up? As if. Two weeks after this setback, my stepmother rose from her bed of depression more determined than ever to conceive. Dad expressed reservations about a sperm donor and we all knew what he was thinking. He was thinking, "My wife is going down to the clinic to have sex with another man." We could see him picturing it, though he was mostly silent.

She laughed and called it "sex without the fun." We all laughed.

"It's not like our genes are that great, Dad," I said consolingly. "It's not like we need to continue the bad hearing gene and skinny lower leg gene or the 'must have the last word in an argument' gene, Dad."

So my stepmother picked her sperm out of a catalog. She decided on a law student (which I can positively attest does not ensure intelligence) who is 6 feet tall with black hair and blue eyes and is listed as Christian under religion.

Random, unprotected sex with a complete stranger (to loosely quote Austin Powers) would be less of a crapshoot than this. At least sex in the parking lot at closing time is personal. You can see how he holds his beer, can see if he twitches or swears; you may determine what car he drives. These are much more elucidating clues to character than a nameless, faceless stranger on a form. In fact, no photo or video of the donor is provided -- to protect his anonymity.

I called the other day. It was an early Wednesday afternoon and my stepmother answered the phone. She always answers the phone because he can't hear it ring and she has given up her rigorous job as a Malibu, Calif., real estate agent, which, in its glory days, required an hour or two at the office per week.

"Reading," she said. "Your dad's out buying low-flush toilets at Home Depot."

"'What to Expect When You're Expecting.'" She giggled coyly.

"Oh," I stuttered, "are you?" I gripped the receiver tightly, prepared.

"Don't know yet. But we could be," she twittered. "Fingers crossed."

Ruth Marvin Webster is an attorney and a writer. Her work has been published in the Los Angeles Times, Parents Press, The Bark, San Diego Family Magazine and San Diego Writers Monthly.