As a senator, John Ashcroft backed a Missouri bill that might make killing an abortion provider justifiable homicide. 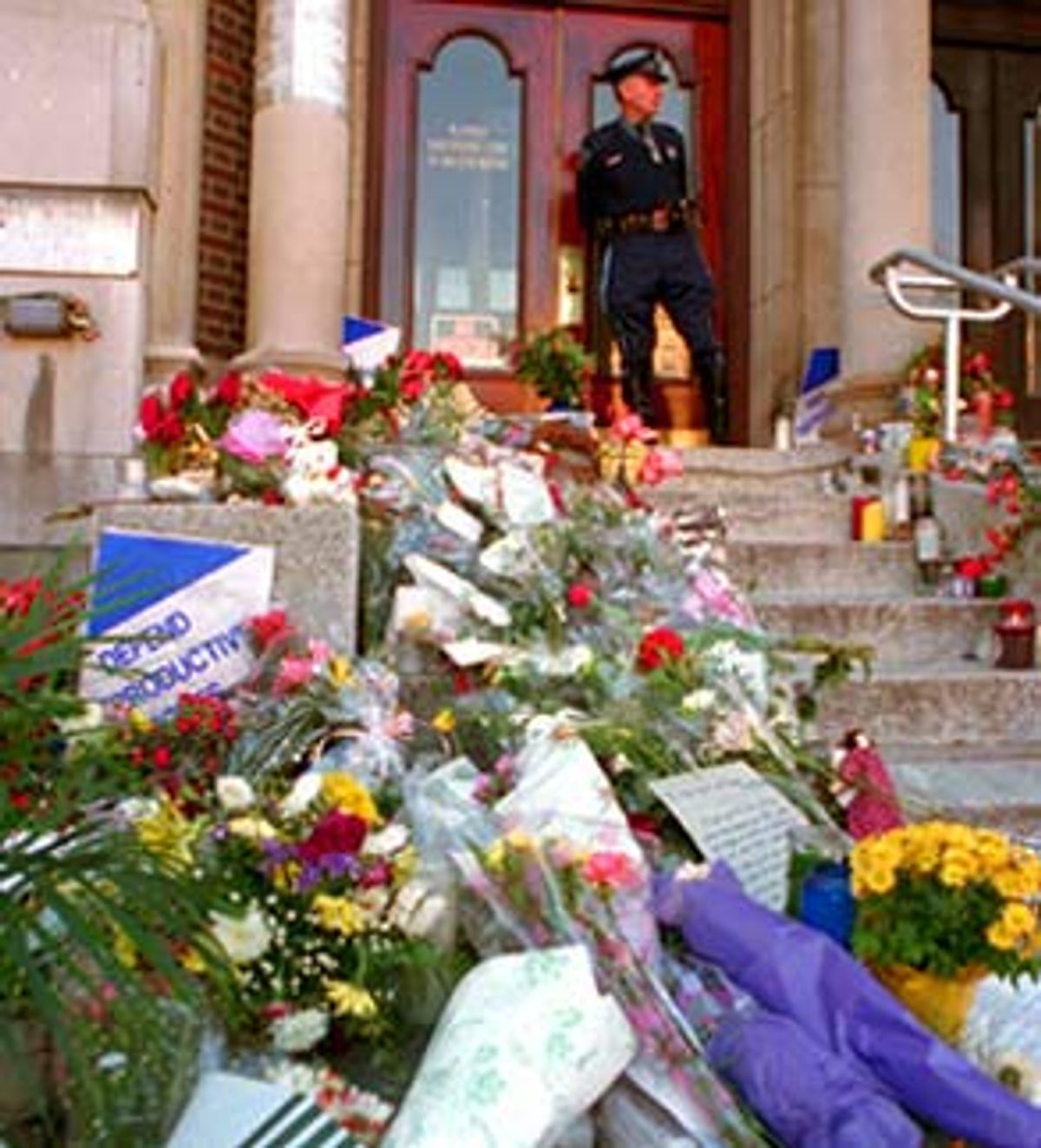 The campaign for Sen. John Ashcroft's seat in the U.S. Senate probably began in earnest after the late Mel Carnahan, Missouri's Democratic governor and Ashcroft's would-be opponent, vetoed a controversial bill known as the Infant's Protection Act. Proponents touted the act as a ban on late-term, or so-called "partial-birth," abortions, and from his bully pulpit on the floor of the U.S. Senate, Ashcroft made hay off his rival's veto.

During an October 1999 speech in support of the Partial Birth Abortion Act, which he co-sponsored with Sen. Rick Santorum, R-Penn., Ashcroft said: "Tragically, the Missouri partial birth infanticide bill was vetoed despite its overwhelming passage by the bipartisan Missouri General Assembly." This had followed a previous statement Ashcroft issued in April 1999, according to the St. Louis Post-Dispatch, calling on Carnahan to "sign this important bill." Later, during his failed campaign against the late Carnahan (whose widow, Jean, has taken his Senate seat after he was killed in a fatal air crash in October), Ashcroft launched a radio ad that attacked the governor, saying he had "vetoed a ban on partial-birth abortions."

But what Ashcroft, President-elect Bush's nominee for attorney general, didn't mention was that the Infant's Protection Act allows the use of force against abortion providers -- perhaps even deadly force -- to stop any illegal abortion. Moreover, the bill leaves unclear just what constitutes an illegal abortion.

Even the bill's author, Louis DeFeo of the Missouri Catholic Conference, initially agreed that the bill allowed deadly force against abortion providers, saying, "I think that's justifiable in protecting a person." (The bill effectively defines a fetus as a person.)

As Carnahan put it in his veto statement at the time: "Perhaps most outrageously of all, this bill will allow someone to legally commit acts of violence, including a lethal act against a physician, nurse or patient, in order to prevent a termination of a pregnancy by a procedure which the attacker reasonably believes would be a violation of this bill."

Moreover, Carnahan wrote, the bill was drawn in such a way as to "ban some of the safest and most commonplace first- and second-trimester abortion procedures."

Carnahan's veto was overridden by the Legislature in an effort led by a member of his own party. And Ashcroft immediately began lauding the veto override at Carnahan's expense. "It is an incredible accomplishment," Ashcroft told his fellow senators. "It represents only the seventh veto override in Missouri history, the third override this century, the first override since 1980." (Translation: Ashcroft suffered no overrides during his two terms as Missouri's chief executive.)

A day after the override, Planned Parenthood of Missouri went to a federal court and won an injunction against enforcement of the law, arguing that it criminalized most common abortion procedures. The injunction remains in effect as Planned Parenthood's legal challenge to the law continues.

"Of all of the different versions of these bills, [the Infant's Protection Act] was the most egregious assault on reproductive rights of any of them -- even going so far as giving a defense to those who might engage in violence," says Kate Michelman, president of the National Abortion Rights Action League (NARAL). "It was an extraordinary bill. And Ashcroft supported it fully."

Now, as Ashcroft tries to assure his critics that his own partisan political views won't inappropriately influence the job of the nation's top law enforcer, the question emerges: Did Ashcroft, a staunch abortion opponent, condone the potentially extreme ramifications of the bill? Ashcroft, like other Cabinet nominees, is not taking questions from the media, and the Bush transition office did not respond to requests for a comment. Supporters of the bill claim it offers no protection for potential abortion-doctor killers. But opponents dispute that.

At first glance, the Infant's Protection Act simply appears to be a particularly punitive version of a conventional "partial-birth" abortion ban, one in which a doctor who performs the procedure and the woman who engages the doctor to perform it could be charged with infanticide, or second-degree murder of a "living infant." But the "living infant" described in Missouri law could be a first-trimester fetus. In the Infant's Protection Act, a "living infant" is defined as "a human child, born or partially born." Prior case law sets the precedent for the use of the word "person" to include "unborn child or children," cited in one statute to mean "the offspring of human beings from the moment of conception until birth at every stage of biological development."

The act also gives new meaning to the terms "born" and "partially born." According to the bill, the "infant" -- embryo, fetus or actual baby -- can be "partially born" even while inside a woman's body, so long as the head has cleared the cervix. This could, potentially, include abortion procedures used at all stages in a woman's pregnancy.

Though the bill makes an exception for "legal abortions," the law itself does not spell out what those might be, and it appears to simultaneously outlaw most procedures previously deemed legal.

But the most confounding statement of the Infant's Protection Act is one that may seem to be the most innocuous: "Nothing in this section shall be interpreted to exclude the defenses otherwise available to any person under the law including defenses provided pursuant to chapters 562 and 563, RSMo."

That first chapter cited a criminal defense for a person who has used force against another under conditions of duress "because he was coerced to do so, by the use of, or threatened imminent use of, unlawful physical force upon him or a third person." The key phrase here is "third person," which under Missouri law could be construed to apply to a fetus. Likewise, the other statute cited allows a person to use physical force -- even deadly force -- if "he reasonably believes that such deadly force is necessary to protect himself or another against death."

Sam Lee, director of Campaign Life Missouri, who helped DeFeo write the bill, contends that the inclusion of these statutes in the Infant's Protection Act is actually intended to shield doctors, allowing them to perform an illegal abortion (in this case, employing "deadly force" against the fetus) if it is necessary to save the life of a pregnant woman (in this case, the "third person.") Reproductive rights advocates ridicule this claim, pointing out that the Infant's Protection Act already exempts physicians from criminal liability if the procedure is performed "to save the life of the mother during pregnancy or birth."

For his part, DeFeo acknowledges that these particular statutes were included to allow for the use of force against medical personnel to stop an illegal procedure, but he claims that the law only bans late-term, dilation-and-extraction abortions. In a televised debate with Carnahan a week before the veto session, DeFeo asserted that the statutes demand that any defense used to stop a banned procedure "must not exceed the bounds of what's necessary in order to stop the action," according to a report in the Jefferson City News Tribune.

Exactly what constitutes "what's necessary"? DeFeo, a lawyer, went on to give examples of acceptable use of force to stop a doctor from performing a proscribed abortion: "pinning his arms to his side or knocking him to the floor." However, backing away from his earlier statement, DeFeo contended, "In no way would anyone be able to use deadly force as a lawful defense."

Ironically, Carnahan was prepared to sign a "partial-birth" abortion bill. In his veto statement on the Infant's Protection Act, Carnahan wrote, "I have said repeatedly that I would sign a bill banning 'partial birth' abortions (assuming it included an exception to safeguard the mother's health). Unfortunately, the legislature chose not to send me such a bill." He went on to carefully lay out his objections, ending with the bill's final section, the provision for "defense of others."

Despite Carnahan's oft-repeated promise to sign a more narrowly drawn "partial-birth" abortion ban, Ashcroft used Carnahan's veto of the Infant's Protection Act to tar the governor throughout the Senate campaign. In one of his direct-mail fundraising letters, sent to potential donors in November 1999, Ashcroft wrote, "My opponent, Mel Carnahan, is one of America's leading advocates of partial birth abortion."

By March 2000, Ashcroft had refined his message in a later direct-mail missive: "Mel Carnahan has been a leading figure fighting to keep the barbaric partial birth abortion procedure legal, while I've been a leading sponsor of the Partial Birth Abortion Ban in the U.S. Senate."

In the summer months leading up to the election, Ashcroft was airing radio spots that took Carnahan to task for commuting the death sentence of a triple-murderer at the behest of the pope, comparing the commutation to Carnahan's veto of the infant protection act. "The pope opposes partial-birth abortion," says a woman in the spot.

The ad goes on to note the largesse bestowed on Carnahan's campaign by reproductive rights groups, calling the governor "the top recipient in the nation of money from Planned Parenthood and the National Abortion Rights Action League."

"But to Mel Carnahan," the man chimes in, "it's all politics."

On the law's provision for the defense of the fetus by deadly force, Ashcroft had little, if anything, to say. (This reporter's search came up empty.) Yet it would be hard for him to deny familiarity with the text of the one-and-a-half page bill. In his October 1999 speech, he notes that the language of his own Senate Partial Birth Abortion Ban differs from that of the Missouri law. As the former attorney general of the Show-Me State, one would assume that he understood the references to the "general liability" and "defense of others" sections of the criminal code.

Though Missouri's Infant's Protection Act remains under injunction by U.S. District Judge Scott O. Wright, last month state Judge Robert H. Dierker Jr. of the St. Louis Circuit took on the interpretation of the law at the request of the federal court. It took Dierker 54 pages to conclude that the law prohibited only late-term partial-birth abortions, and that the law would not allow for lethal force against abortion providers. Privately, reproductive rights advocates refer to his opinion as "a mess"; publicly, some, like Paula Gianino, president of Planned Parenthood of the St. Louis Region, prefer to term it "an interim opinion," and plan on waiting for clarification.

The case is now back at the federal appeals court, and Planned Parenthood has filed a motion to amend Dierker's judgment. Should this law or another like it make its way to the U.S. Supreme Court, says Michelman, it would be up to Ashcroft, should he be confirmed, not only to enforce it but to interpret the court's decision for other government agencies.