Round 1: Ashcroft on the offensive

Democrats and Republicans take their positions, while the nominee tries to quell doubts about his impartiality. 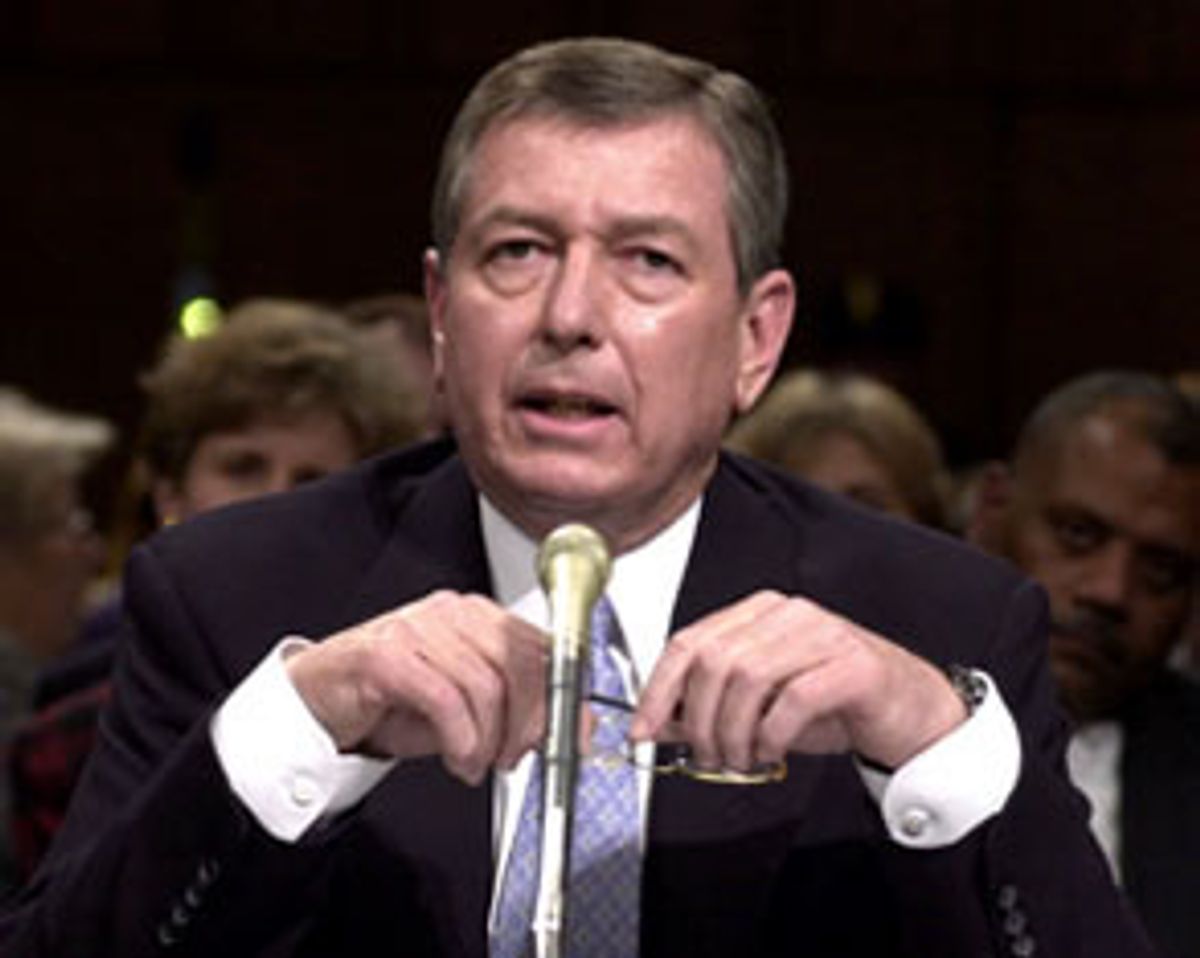 Despite promises from both political parties to be fair and impartial in deciding former Sen. John Ashcroft's fitness to be attorney general, it was clear from Day 1 of his confirmation hearings before the Senate Judiciary Committee that the parties have dug their ideological trenches and won't come out. With Ashcroft himself as the sole witness, and just two senators for each side asking questions, it was the Democrats for the prosecution and the Republicans for the defense. Much of what was said on both sides was tedious partisan rhetoric, and an atmosphere of playful unpleasantness pervaded the proceedings.

The tone from the opposition party was more varied than the unwavering support Ashcroft received from the Republicans on the panel during the opening statements. It was clear, however, that early reports were premature in stating that only California Sen. Barbara Boxer was solidly in the anti-Ashcroft camp. Liberal fixture Sen. Ted Kennedy of Massachusetts spent his opening remarks ripping the record of his former colleague, claiming Ashcroft wouldn't be able to separate his duties as the nation's top cop from his strong conservative views.

"During Senator Ashcroft's quarter century in public service, he has taken strong positions on a range of important issues in the jurisdiction of the Justice Department," Kennedy declared. "Unfortunately and often, he has used the power of his high office to advance his personal views in spite of the law of the land."

Other Democrats didn't go so far, but there was a past-tense tone from California's Dianne Feinstein, New York's Charles Schumer and Illinois' Dick Durbin when referring to the possibility of their backing Ashcroft. Schumer particularly claimed that his discussions with Ashcroft raised more concerns than they settled. "I want to thank you for being open and honest in this process. In return, let me be straight with you," Schumer said. "I have serious misgivings about your nomination to be attorney general."

From his statement, Schumer seemed to imply that he had learned more about Ashcroft's record from the liberal interest groups arrayed against the Missouri conservative's nomination than he had gathered over the two years they had served in the Senate together.

While he praised Ashcroft's personal ethics, Schumer said that he was now unsure whether those ethics would interfere with the duties of attorney general. The Show Me State pol would have to show Schumer some proof of his objectivity before getting a thumbs up on his nomination.

"The burden of proof," Schumer told him, "has shifted back to you."

Of the Democrats on the panel, only Wisconsin reformer Russ Feingold stood firmly for the principle that Ashcroft shouldn't be Borked just for being a conservative. "Being in the middle of the road is not a requirement for a Cabinet position," Feingold concluded.

While the Democrats ranged from scornful to cautiously kind in their opening remarks, the entire Republican contingent was loaded for bear from almost the first word. The ranking GOP senator, Orrin Hatch of Utah, led with a stream of relentless praise for Ashcroft that painted him as a latter-day Wyatt Earp who spent his career making the world safe for democracy, capitalism and apple pie. "Senator Ashcroft," Hatch gushed, "we are eager to hear -- and the American people are eager to hear -- your plans for making America a safer place to live."

The rest of the Republicans participated in preemptive grousing about the unfair deal Ashcroft has received from his opponents in the press and among liberal interest groups. Iowa's Sen. Chuck Grassley's characterization of the anti-Ashcroft contingent was typical: "I do want to make a comment about the mob of extremists who have hit the airwaves and are trying to intimidate members of the other side into voting against Senator Ashcroft ... I hope that my colleagues on the other side have the intestinal fortitude to stand up to these extremists accusations," he said.

Ashcroft himself seemed ready for battle, front-loading his own opening statement with the kind of "uniter not divider"-isms that his would-be boss, George W. Bush, spouted in his presidential campaign. "There are millions of Americans who wonder if justice means hostility aimed at 'just us,'" he said. "From racial profiling to news of unwarranted strip searches, the list of injustice in American today is still long. Injustice in America against any individual must not stand." He then rattled off a list of policy concerns straight from the NAACP songbook, including discrimination in housing, voting rights and criminal justice, in a transparent attempt to undercut the opposition of several civil rights groups that have lined up against him.

Ashcroft also pointedly promised to set aside his own conservative views where they conflict with the laws he would called upon to defend as chief of the Justice Department, insisting that he knows the difference between writing the laws as a legislator and enforcing them as an executive. "I understand the responsibility of the attorney general's office, I revere it, I am humbled by it. And if I am fortunate enough to be confirmed I will spend every waking moment -- and probably some sleeping moments as well -- dedicated to ensuring that the Justice Department lives up to its heritage -- not only enforcing the rule of law, but guaranteeing rights for the advancement of all Americans."

Surprise, surprise, that wasn't good enough for Sen. Patrick Leahy, D-Vt., the committee's chief, who followed a statesman-like opening statement with a relentless grilling on Ashcroft's record. Leahy rode Ashcroft especially hard on his opposition to the 1997 nomination of Bill Lann Lee (for being pro-affirmative action, or "quotas," as Republicans claimed) to lead the civil rights division of the Justice Department. And he blasted Ashcroft's opposition in the 1980s to Missouri school desegregation.

Ashcroft took issue with Leahy's characterization of the desegregation issue, claiming that he only opposed the high cost of the integration program. "When the state of Missouri was asked to fund, with hundreds of billions of dollars, a program imposed by a federal court," Ashcroft began, before being interrupted by Leahy, who asked whether Ashcroft really meant hundreds of millions of dollars, and not billions.

Ashcroft took the opportunity to poke fun at himself. "I thank you for correcting me. I've been in Washington so long, I've forgot how to say millions. I've just started saying billions," Ashcroft said. Leahy, however, was not amused, shooting back, "I'm more interested in what you said at the time of the desegregation orders in Missouri."

The rest of the questioning was similarly targeted, with Kennedy zapping Ashcroft again on school desegregation, raising his voice and baiting Ashcroft with a "Have you stopped beating your wife?"-style inquiry: "How do you justify your relentless opposition to the voluntary school desegregation and, sort of, a scorched-earth legal strategy to try and block it?" Kennedy asked.

When his meandering response tested Kennedy's patience, Ashcroft said, in a pleasant voice, "It takes a lot longer to answer these charges than to make them."

Ashcroft did catch a break with softballs lobbed by Hatch and Sen. Strom Thurmond, R-S.C., meant to get the attorney general-designate to admit to being wonderful and willfully misunderstood. "Time and again, senator, your record reflects your dedication to enforcing the law, regardless of your particular views in areas like the environment, abortion, guns, religion and rights," Hatch intoned. "If confirmed as attorney general of the United States, will you enforce the laws of this land irrespective of your personal beliefs?"

"I will," Ashcroft replied.

Thurmond read his own questions as if he'd never seen them before. They included zingers like: "As a senator, you were very dedicated to the war on drugs ... As attorney general, would you continue that commitment to fight illegal drugs?" and "Do you think most attorney generals have had to impose some law that they did not personally support?" (The answers to both were extended versions of "Yes.")

It wasn't surprising that the only moment of spontaneity didn't come from the questioners or their prey. Between the opening statements and the questioning, four black men rose from the audience chanting, among other things, "Ashcroft kills!"

The Capitol's police force knocked down several chairs as it apprehended the men, all down from New York; the cops dragged them out and arrested them for disrupting Congress. Though the men never got to make much of a statement about what they were protesting, the outburst momentarily unsettled the script set by the Democrats and Republicans. In his harshest scold voice, Leahy warned that such a thing had better not happen again.