Does "Thirteen Days" get it right?

A moviegoer with his own role in history looks at how fact-based films interpret reality. 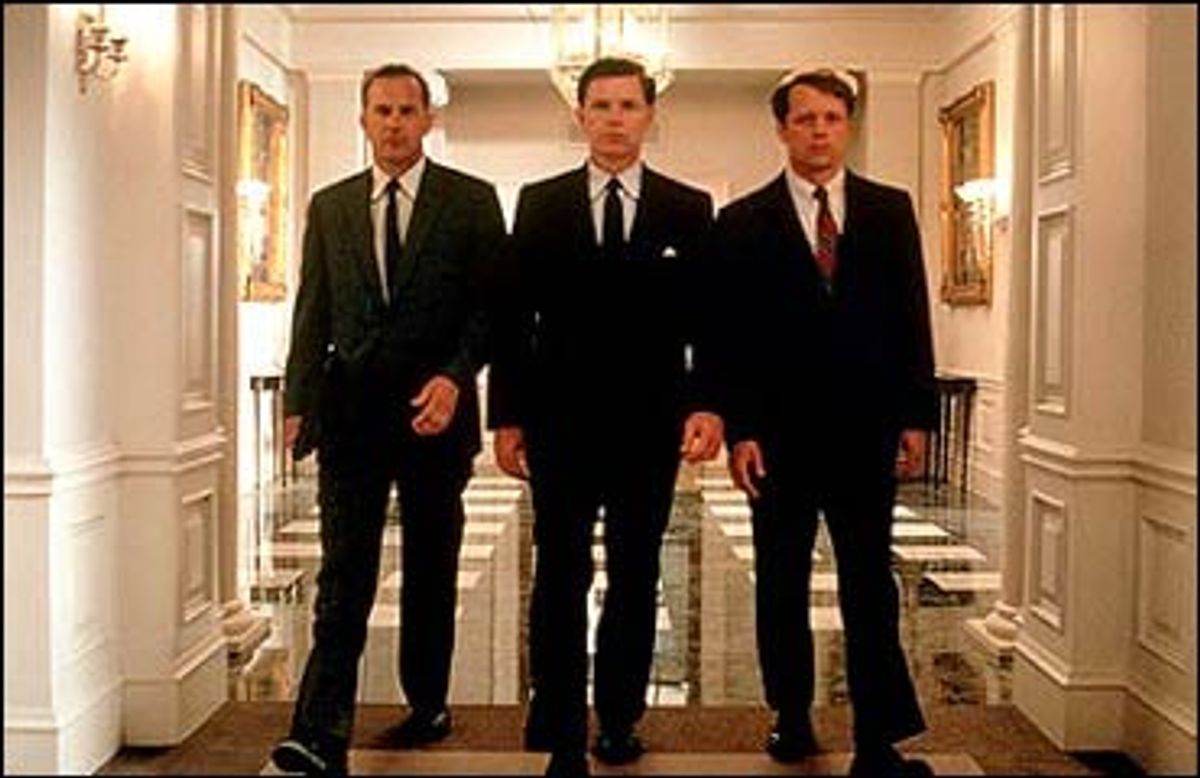 Historians, practitioners of a profession that has been interpreting the truth since the days of Herodotus, are the first to be offended when a filmmaker interprets the truth for dramatic purposes. Then the journalists chime in, followed by those directly involved in the historical events in question, particularly when they are not hired as consultants on the film. Only occasionally do film critics enter the verisimilitude fray, but they may take a stance if there is a sizable complaining chorus of historians or journalists or participants.

So far, Kevin Costner's new film, "Thirteen Days," which portrays President Kennedy's handling of the Cuban missile crisis in October 1962, has escaped the harsh words of such cinema truth seekers. Besides a glitch on some ads (which featured small photos of planes that were not in service at the time), no historian has contested its history, and no journalist has questioned the account (although Kennedy biographer Richard Reeves has raised appropriate questions). And several of the participants have viewed the film and enjoyed it. But frankly, I'm still holding my breath, because all reality-based films are vulnerable to attacks -- and they can be murderous.

When I first read that Costner was playing Kenny O'Donnell, a Kennedy White House aide, and that the story of the missile crisis would be told from O'Donnell's point of view, I happened to be reading the book by Pulitzer Prize-winning investigative journalist Seymour Hersh, "The Dark Side of Camelot." Hersh's less-than-flattering look at JFK casts ugly shadows on O'Donnell.

Based on interviews with Secret Service agents who had never previously spoken publicly, Hersh presents O'Donnell as one of the president's procurers of women and gratuitously mentions O'Donnell "having a three-way sexual encounter" with "two young women on the White House staff." Hersh also raises a charge against O'Donnell made by Paul Corbin, a Kennedy campaign aide who purportedly developed evidence that O'Donnell skimmed $50,000 in campaign funds.

In Hersh's account, Corbin's information was given to Attorney General Robert Kennedy on the morning that JFK departed for Dallas, never to return. Although Corbin also informed journalist and presidential confidant Charles Bartlett of the charges, the matter died with the president. Hersh speculates that the campaign money may have, in fact, gone to JFK himself, who needed cash to keep one or more lady friends quiet.

Because JFK's extramarital activities had nothing to do with the Cuban missile problem, I was certain that this information would (and should) be ignored in "Thirteen Days." It is. But I was not sure if the film could simply ignore Hersh's version of the events: that the crisis was anything but a triumph of Kennedy brinkmanship; that it was instead a way to mute criticism of the Kennedy administration's failed Bay of Pigs invasion, which still remained a haunting political problem for the forthcoming off-year congressional elections.

Basically, "Thirteen Days" accepts much of the myth. Yet Hersh believes that "Jack Kennedy's deceits about his personal life ... pale beside the false legacy he and his brother manufactured in the days and weeks after the missile crisis" -- that legacy being "that the valiant young president had won the missile crisis, by negotiating from strength." Hersh makes a strong case that the legacy is bogus and that it has haunted American policymakers in the years since, making it difficult for Presidents Lyndon Johnson and Richard Nixon to compromise and end the war in Vietnam.

"Thirteen Days" ignores the facts raised in "The Dark Side of Camelot." Hersh believes that Kennedy's ongoing efforts to assassinate Fidel Castro explain why the dictator embraced Moscow, a fact unknown to the American people at the time. In Hersh's timeline, the CIA began warning the president of Russian missiles in Cuba as early as Aug. 22, 1962 -- weeks before the fateful day of Oct. 16, as the myth would have it, when the U2 spy photographs first became available. The film fudges this problem by ignoring it. With these and many other facts Hersh has the Kennedy brothers dangerously escalating the confrontation with the Soviets for their own political gain.

But the more I thought about it, the clearer it became that Hersh's facts do not make the story told in "Thirteen Days" untrue. By telling the story from O'Donnell's perspective, "Thirteen Days" has not distorted history. To the contrary, the story from this point of view is no doubt quite accurate, favorable though it is to the Kennedys and O'Donnell.

While Costner has the starring role as O'Donnell, that character does not become the star of the missile crisis in the film. On-screen as in life, the key players are JFK, played skillfully by Bruce Greenwood, and RFK, played nicely by Steven Culp.

Questions about the cinematic verity of a film like "Thirteen Days," or any of the reality-based films, go back to the beginning of the movie business. They started with D.W. Griffith's 1915 "The Birth of a Nation," the silent film about the experiences of a Southern family during and after the American Civil War. President Woodrow Wilson said Griffith's account of the Civil War Reconstruction was "like history written in lightning."

Blacks, understandably, were outraged at the film's distorted and racist portrayal of history. The film produced a big box office -- and also caused race riots in Atlanta, Boston and Chicago.

Years ago, at a time when my book about the Nixon White House and Watergate, "Blind Ambition," was being made into a six-hour miniseries, novelist Irving Wallace told me the story of the most realistic movie ever made by Hollywood, which he later included in "The Book of Lists." In 1914, a Hollywood director wanted to depict an authentic Mexican revolution, so he hired the real thing, Mexican revolutionary leader Pancho Villa, who was paid $25,000 to stage a revolution for the cameras -- minus the killing, I assumed.

Wallace said they filmed for many days in Mexico, with guerrilla forces regularly stopping and starting for camera angles and the best light, and reported that "when the completed film was brought back to Hollywood, it was found too unbelievable to be released -- and most of it had to be reshot on the studio lot."

In short, it was too real. This is the dilemma of the filmmaker who deals with reality. If the story and pictures are too authentic it may be unbelievable, if not boring, on-screen. Yet, as Griffith showed, fabricated history can appear all too real. Today, it is widely understood by audiences that all films are, to some degree, fantasy. As Roger Ebert observed, "In a sense, of course, all films are fiction -- even documentaries, which filter the material through the sensibility of the filmmaker."

Steve James, one of the best in the business of documentaries, wrote and directed the acclaimed "Hoop Dreams," which follows two inner-city kids with dreams of professional basketball careers. He explained to the Denver Post, "When you collect 250 hours of material like we collected ..., you are out of necessity having to make some very tough decisions about what stays and what goes in. When you have that much material, you can shape it, have it say whatever you want it to say."

I mention this fictional aspect of filmmaking not to defend "Thirteen Days," for it needs no defense, but rather to make the point that all films must and do distort life. I mention it because it pains me to read the often thoughtless attacks on reality-based films, a genre that I particularly enjoy, since these films both entertain and inform. "JFK," "Mississippi Burning," "Nixon," "The People vs. Larry Flynt," "Ghosts of Mississippi," "Boys Don't Cry," "Amistad," "The Insider" and "The Hurricane" are just a few of the movies that, to varying degrees, have been attacked for altering history. Yet they are exceptionally well-made movies and captivating stories -- if given a chance.

"Life is as tedious as a twice-told tale," Shakespeare wrote. Dramatists (not unlike historians and journalists) package events as a story, with an often arbitrary beginning, middle and end, omitting countless circumstances and compressing or trimming others for the telling. Even a multimillion-dollar razzle-dazzle film with wraparound sound, on a giant screen, with extraordinary special effects designed to hold the attention of even the most attention-deficient, testosterone-laden lads and thrill-seeking, love-lost ladies, will fail without a solid story. "Titanic" is not the highest-grossing film ever made because of its spectacular special effects; rather, it succeeds because of its gripping story, which is enhanced by re-creating reality with special effects.

Theatrical stories are uniquely crafted narratives, an art form. They typically deal with ordinary people in extraordinary circumstances, situations that the audience can empathize (but not always sympathize) with; the characters are archetypes, not stereotypes. Film stories are built scene by scene, and those that are well-crafted hold our attention in every scene through the device that makes all drama work: human conflict. We are attracted to conflict like a moth to light -- we can't turn away, and we want to know how the conflict is resolved, or not resolved.

Robert McKee, a former Fulbright scholar who has spent much of his life studying and teaching the craft of storytelling (and instructing many of Hollywood's producers, writers, directors and actors), observes, "Story is a metaphor for life. It takes us beyond the factual to the essential." He adds, "What happened is fact, not truth. Truth is what we think about what happens."

McKee reminds his cinema students that theatrical truth wears many faces, and offers a wonderful example about the many stories portraying Joan of Arc. The historical facts are clear: Joan was a young French peasant girl who believed she had been divinely inspired to raise an army to defeat the English; her effort failed, and she was captured, tried and burned at the stake. Yet dramatists of stage, page and screen, all relying on the same underlying facts, portray a variety of Joans: French dramatist Jean Anouilh a spiritual Joan, Irish playwright George Bernard Shaw a witty Joan, German playwright and director Bertolt Brecht a political Joan, Danish director Carl Theodor Dreyer a suffering Joan, Shakespeare (with a distinctly British view) a lunatic Joan and Hollywood filmmakers a romantic warrior Joan.

Similarly, "Thirteen Days" could have portrayed the Cuban missile crisis in many ways. While it does not tell the story that Hersh might have told, or indeed that many others might have told, it is a generally accurate portrait of the events, a compelling story well told and thoroughly enjoyable theater. I tip my hat in admiration and appreciation of the entire cast and crew (including Costner, for putting his box-office muscle into the project), screenwriter David Self and director Roger Donaldson, and producers Armyan Berstein and Peter Almond.

And I urge anyone interested in the underlying historical facts of the Cuban missile crisis to visit the interactive, multilayered Web site for the film. No reality-based film that I am aware of has more effectively employed the complementary medium of the Internet. Like the film, the Web site is informative and entertaining. And the war-simulation sequence shows how close we really came.