"A single nation of justice and opportunity"

In a 14-minute political sermon, George W. Bush promises to unite a divided country after the bitterly contested election. 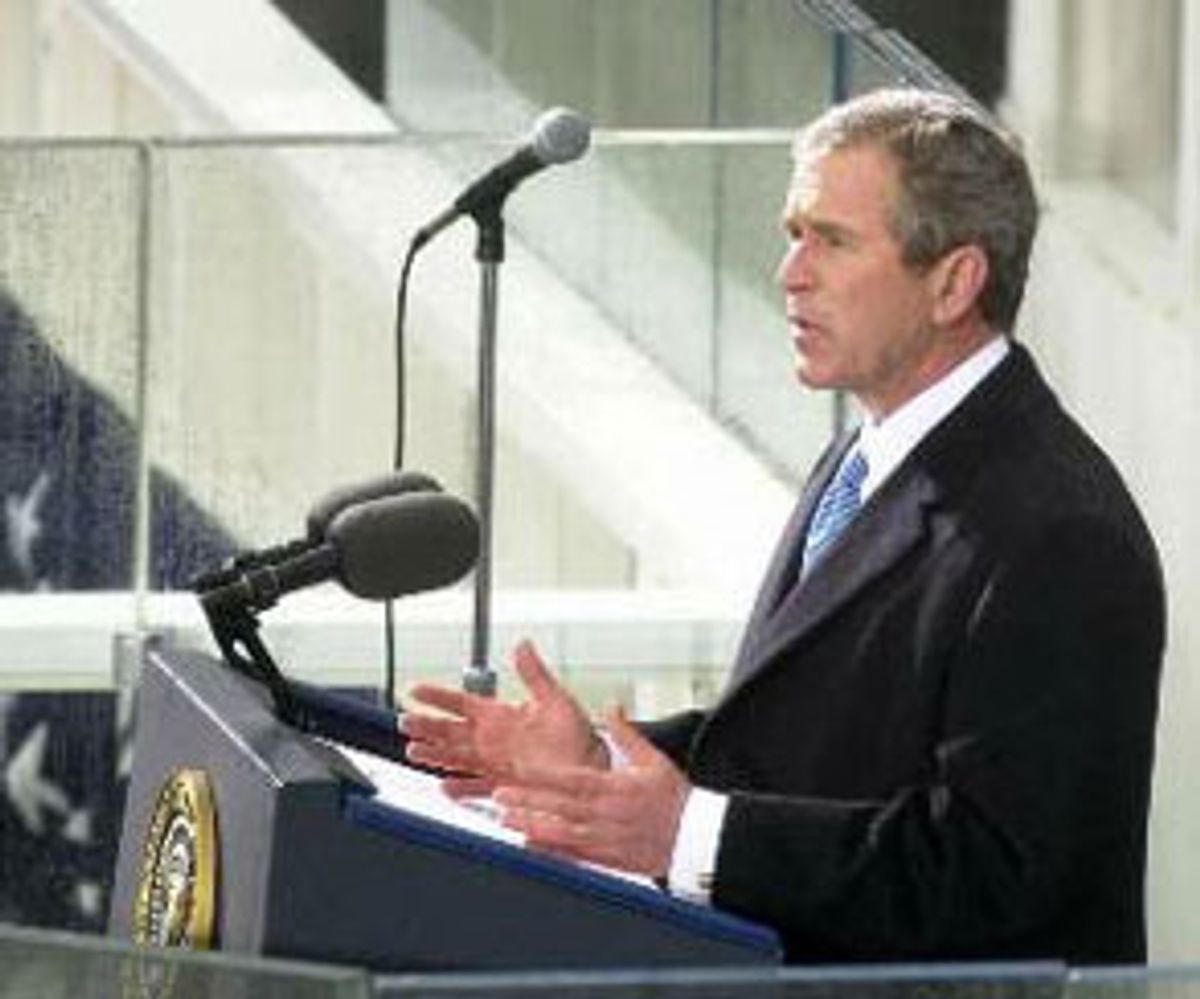 After all the legal wrangling that marked the presidential election, the peaceful transfer of power took place on schedule Saturday, as George W. Bush was sworn in as the 43rd president of the United States, becoming just the second son of a former president to assume the office himself.

"I will work to build a single nation of justice and opportunity," Bush pledged, in a 14-minute political sermon that will likely be judged one of his best speeches. The new president called on the "spirit of citizenship" to move the country beyond its divisions.

"America at its best is compassionate. We know that deep, persistent poverty is unworthy of our nation's promise. Abandonment and abuse are not acts of God, they are failures of love. And the proliferation of prisons, however necessary, is no substitute for hope and order in our souls," Bush said.

Bush takes office with the narrowest electoral vote majority in American history, and is the first president in more than 100 years who did not win the nation's popular vote. But none of that appeared to matter on stage Saturday, as Bush took the oath of office while his vanquished electoral opponent, Al Gore, looked on in the background. Around Washington, however, roughly 20,000 protesters skirmished with police.

The pomp and circumstance offered a temporary pause in a contentious partisan battle that has eased little with the end of the election -- from the post-election battle in Florida, to the fight over Bush's cabinet appointees, including former Missouri Sen. John Ashcroft. Bush took the opportunity to call for partisan cooperation.

"Civility is not a tactic or a sentiment. It is the determined choice of trust over cynicism. And this commitment, if we keep it, is a way to share accomplishment."

The speech sounded some themes not traditionally thought of as Republican. Repeating his pleas for compassion, Bush said that immigrants make us "more American, not less," and vowed to fix ailing schools for children most in need.

But there was no doubt that a Republican reclamation was in progress. The biggest applause lines in Bush's speech came when he repeated his campaign pledges to cut taxes and fortify our national defense.

Before Bush took the oath, the crowd was led in prayer by Franklin Graham, who himself was performing the job his father once held. Rev. Billy Graham has provided spiritual guidance to numerous American presidents, but was too ill to attend Saturday's ceremony.

Gore made his way to the stage earlier than he would have liked, escorted by President Clinton and Senate Democratic leaders, as the Marine Corps band played "Hail to the Chief" for Clinton one last time. The former president -- fresh from issuing new executive orders and pardoning 100 wrongdoers, including his brother, Roger -- greeted his successor warmly.

On television, cameras had a difficult time deciding which George Bush to feature, as the former president frequently teared up with emotion over his son's ascendance.

There were other remarkable political milestones evident at the ceremony. President Clinton's wife, the outgoing first lady, was announced as "the first lady, Sen. Hillary Rodham Clinton." New York's newest senator could not suppress a self-satisfied smile.

But Saturday belonged to Bush. As he took the oath of office, with his hand on a bible held by his wife, Laura, the band struck up "Hail to the Chief" for the first time for George Walker Bush.

Bush was sworn in by Supreme Court Chief Justice William Rehnquist, wearing the gold stripes on his black robe that he introduced during the impeachment of President Clinton. The potentially awkward moment -- Rehnquist was part of a 5-4 majority that intervened to stop the Florida recount and give Bush the election -- passed without note.

There had been some talk of moving the ceremony inside the Capitol because of a cold rain. On MSNBC, presidential historian Alan Brinkley applauded the decision to brave the elements. "This is a man with very serious legitimacy problems," he noted. "This was a chance to make him look like a president in the minds of people who don't think he really is."