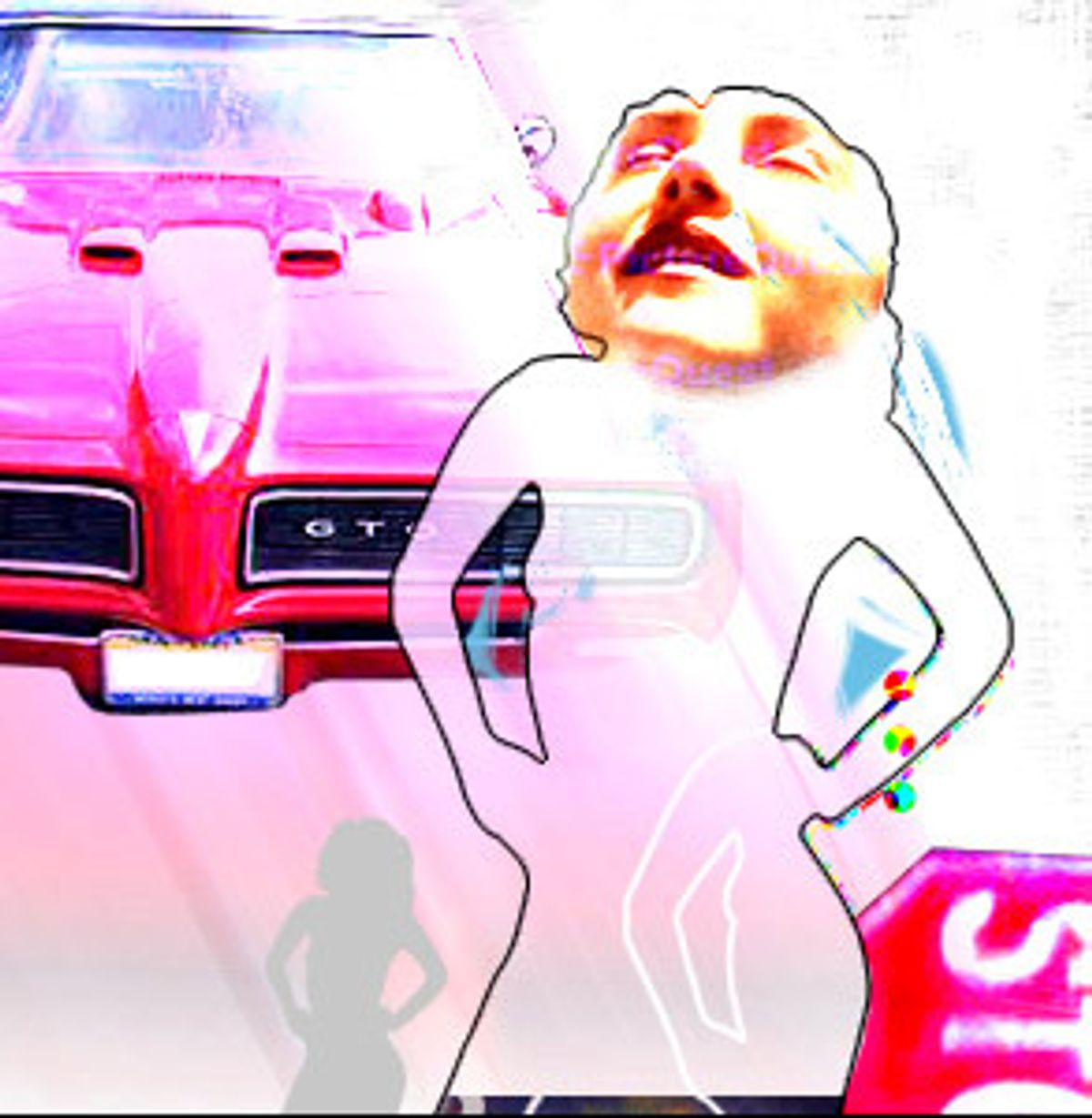 I sat in a traffic jam on Wilshire Boulevard. There were police cars shrieking around a mall on Beverly. Four children had been stomped to death in the fight to buy Beanie Babies and there was an unseemly fracas of emergency services. Funeral directors and life insurance salesmen had gathered on the spot, along with the usual procession of television crews, film crews, cable crews and agents from film companies. Los Angeles loves a disaster. Los Angeles loves a disaster as much as I love my car, and that is a lot, my friends. If anything happened to the car, man, I wouldn't know what to do with myself. It would mean years of therapy. And mourning. And a veil. Everything.

I pictured myself briefly in a veil, sniffing dramatically, red-lipped through the black net. It would be difficult to smoke a cigarette through a veil, though Faye Dunaway managed it in "Chinatown."

There are a lot of people who are possessed by the spirit of the first-generation Firebirds; that early breed -- all Camaro class and four-barrel powerhouse. I was driving a 1969 400HO, straight out of Detroit, the darling Ram Air, convertible of course, and, as any porch-sittin' lager-loving ol' fool knows, the '69 is one of the great classics. Big, purry, no vulgar fins -- rarer than those Mustangs everyone drives round West Hollywood, classier than your average Chevy Chevelle, and more muscle than any boy-zone four-wheel.

Some say it's too bulky; the purists stick with the '68, but I have to disagree. The flash gits worship the 1973 Trans-Am. Certainly the GTO is smaller, more manageable -- a girl's car, some might say. But I say big is better and less is less. The '68 is a straight's car -- all modified modicum and anal twits on cruise nights. The '69 is the decadent beauty, the symbol of that final year of excess, the year of Woodstock and the Family, when Peter Fonda was a pin-up, the hippies were shot and the Angels went mad at Altamont. 1969. I have seen its relations dressed up for hot-rod nights like big birdy slags -- painted Corvette yellow, beefed-up sub-frames, pinchweld braces, idiotic axles; but mine was an original four-bolt main-block, one hundred percent rust-free meta goddess. Color? Deep, dark red. Not pillar-box, not fire-engine. Blood. And yes, the nails matched.

The Firebird came with options. It had power steering, power brakes, power top, power windows, power seat and a power antenna. There were integral bumpers in Lexan plastic, chrome grille, spooky tail lights, rally wheels, and wide, soft, double-bed bucket seats giving up the space, the wide-open space, for any sexual position available to the thinking and fucking people of this great free world. And the bonnet? The bonnet was a metal bed made for it.

This girl has seen a lot of action on and in this good old car. I mean, there was Lonny, who liked me to ease myself up and down on the gear stick, and that cowpoke from Austin who tied me up, pushed me face down so that all I had was that smell of black leather in my nose as he took me from the back. Leather. Darkness. Screaming-out orgasms. I can't recommend it enough. And there was a man named Sebastian, about whom I can remember very little except that he had a thick dick and looked like one of Gene Loves Jezebel.

Most everybody likes it over the bonnet. Face up, face down, panties on, panties off, who cares? It's all metal and fuel and come and heat.

Some drivers wound down their windows and waved at me. I snapped open the gold compact and reapplied a deft slick of major red. Red lipstick, red car, red nails. I looked so good I wanted to fuck myself.

"Nice car," said a punk in a passing Packard.

"Marry me?" said a beard sitting in a Lexus.

"Whore!" shouted a plaid shirt in a Ford pick-up.

"Is that a compliment?" I gazed at him coldly through cat's-eye shades as black as the night.

Jealousy. Jealousy. Wherever you go there is jealousy.

I turned on the radio. The Eagles were standing on a corner in Winslow, Arizona. Hot metal stretched out towards Santa Monica, heat wavered off bonnet tops. There was the thumping of radios and "Cam An!" Then honking and distant gunfire. To the right a mini-mart offered Donettes, Bageldogs and Beauty. To the left one Marlboro man said to the other, "Bob, I've got emphysema." The heat burned down on the top of my head. I sipped a white grape-'n'-cranberry ginseng soda.

Looking up, I saw twenty red parakeets sitting in a palm tree, still, like scarlet jewels on the green leaves. Then, without warning, and as one, they soared into the air and swooped away, one scarlet streak across the cloudless blue sky.

A ponytail in a suit cruised past, wound down his window, and flipped a bunch of roses into the back seat of the convertible as the traffic finally began to move slowly forward.

Gad. Everyone is a romantic.

I had met Bleak Hardcourt at a barbeque in Bel Air. He bore down in mirror shades and told me to attend his "little pardy," or else. He had enjoyed the peak of his acting career and was now settling down to enjoy the luxuries of its rewards. Over the years he had sustained hundreds of car accidents, nuclear explosions and alien attacks, but now, as the years were making his face more distinguished and endowing him with an illusion of worldliness, he was devoting less time to work and more to squandering his enormous wealth. And so, as all aging action heroes must, Bleak had retired to his sauna, where he sat and planned his run for the presidency. He lived underground, where he hoped to be safe in the event of Armageddon.

"If it worked for the Pueblos, it can work for me," he told me.

A team of pot-holers and interior designers had created a subterranean labyrinth underneath the Hollywood Hills. A masterpiece of engineering, the network of caves and grottoes protected the inhabitants against fire, flood, hurricane, riot and all the other hallmarks of life in California.

Living underground and in the dark did not suit everybody. Hedy Hardcourt, Bleak's third wife, had had to be readmitted to a treatment center on Bob Hope Drive, where qualified counselors promised to "supply a unique environment in which she could regain control of her life."

The entrance was hidden near a lake, its secret presence was indicated by the limousine gridlock that had built up around the edges of the water. Suits, implants, highlights and teeth poured out of cars and swirled through the maze of candle-lit tunnels towards a central cavity that constituted the banqueting hall.

A charming youth ambled towards me. He was fresh and dark and brown-eyed and blessed with all the things a youth should be blessed with, such as a smile that said I could do it with you anytime I liked. You know it, I know it, the world and his nubile niece know it.

He opened the driver door for me and I allowed him a full view down my cleavage, whose crevice had been pushed up and enhanced by an underwired leopardskin bra. He observed with a mixture of curiosity and admiration, as if he was looking around a house that he knew he could not afford.

"I've got the Bonneville, hardtop coupe ... ever had sex in it?"

"Are you wearing panties?"

He pushed me backwards over the bonnet and kissed me very hard on the mouth while pushing his hand up my skirt. As he shoved three fingers into my fanny I oozed all over them.

His eyes closed and he pushed his fingers further into me, bringing me to the first orgasm. Pressing the bulge in his jeans firmly against my pelvis he then pushed me back over the banquette that joined the passenger and driver seat and burrowed his face between my thighs. Separating the lips of the labia with his fingers, he pressed his tongue firmly down onto my clit, flicking relentlessly and licking voraciously.

Stella Black is the author of "Stella Does Hollywood."