Will Japanese video games that reward you for shaking your moneymaker ever find a following in the U.S.? 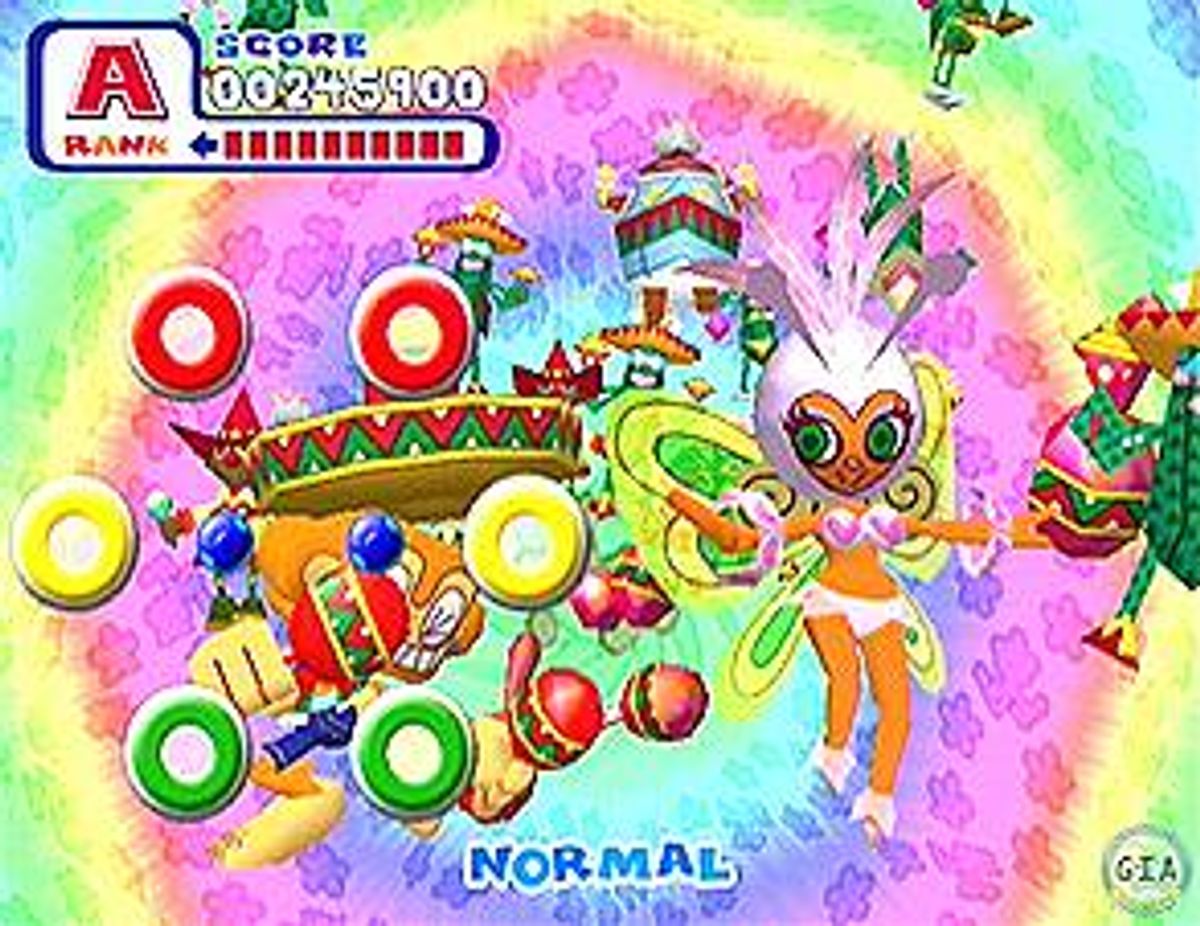 A young American enters a Japanese arcade and begins playing a game called Samba De Amigo. Instead of controlling the action with a joystick, he shakes a pair of maracas in time to Latin-flavored music.

"A whole bunch of people were standing around the machine, just looking at it -- but nobody would actually take the initiative to pop in 200 yen and give it a try," says Colin Williamson, a video game journalist currently living in Tokyo. "I cut to the front of the pack, slammed in my cash and blasted through the game in a near-psychotic frenzy of maraca-shaking glee. By the end of the three-song set, there were around 50 people crowded around the machine applauding the strange gaijin. Some of 'em even took pictures."

So-called beat games, such as Samba De Amigo, in which music and rhythm are an integral part of the gameplay, have become a cultural phenomenon in Japan over the last few years. Perhaps the most popular of the genre is Dance Dance Revolution (DDR), in which players "dance" to the music by hitting four large buttons with their feet in order to match arrows displayed on the screen. Although they're fundamentally simple, what makes beat games so irresistible is the way they tap into instincts for rhythm and the desire to interact with music. They also break down the traditionally static nature of video games by introducing a performance element.

"I think it's essentially the same mind-set of karaoke -- you're getting up there and humiliating yourself in front of your friends, but damned if you're not having fun while doing it," says Williamson.

Ever since video games made the jump from 2-D to 3-D in the mid 1990s, innovation, as far as the gaming industry is concerned, has been limited to mostly incremental upgrades. Even the much-hyped PlayStation 2 represents only a marginal improvement on what has been seen before. Until the next major paradigm shift (virtual reality, anyone?), video game developers are searching for ways to further bridge the interactivity gap between the player and the television screen, and beat games do just that.

Knowledgeable gamers have been importing home versions of DDR for the Sony PlayStation, Sega Dreamcast and Nintendo 64 for some time. Now the game is beginning to appear in U.S. arcades. No one knows whether beat games will ever be as popular in the U.S. as in Japan. The Japanese are accustomed to playing games that attract a broad spectrum of people, whereas most of the games that reach the U.S. usually don't appeal much beyond the demographic of adolescent boys. Japanese games have long offered a diversity of experiences suitable for both sexes and an entire range of interests. There are games that simulate dating, cooking and the operation of a train; there is even an upcoming PlayStation title that lets players simulate being on a diet.

"Japanese players have a fascination with 'life' fantasy," says Guillermo Ruta, the 21-year-old webmaster of DDRJamz.com. "Plus they're simply more open-minded."

Williamson sees other roadblocks in the path to Americans' acceptance of beat games: "[Americans] are just way too embarrassed to hop up on a mini dancing stage and be the object of attention," he says. "Another factor is that American arcades are a bit seedier and less friendly than Japanese ones, which are typically good date hangouts."

The electronic roots of these rhythm-based video games can be traced to the call/response gameplay of Simon, the now-classic toy introduced by Milton Bradley in 1977. The computer forerunner was 1984's Break Dance for the Commodore 64. Nintendo's 1988 Power Pad add-on for the Nintendo Entertainment System bore a striking resemblance to DDR's dance pad. The Nintendo game Dance Aerobics could be considered a direct ancestor of DDR. But the idea didn't catch on then. It wasn't until 1997 that PlayStation's Parappa the Rapper reintroduced the Simon concept to the video game world. But it too used only a gamepad to control the action.

In October 2000 Sega released Samba De Amigo for the U.S. Dreamcast. Sega was obviously testing the waters with its release -- although it priced the game at a reasonable $39.99, the company produced only 10,000 sets of maracas at $79.99 a pop. So the complete package costs almost as much as the game console itself.

However, the first real test of beat games ultimate popularity comes in March, when Konami is slated to release a U.S. PlayStation version of Dance Dance Revolution, complete with a dance pad, for only $59.99. Although the game has become a cult hit in American arcades, it is still unclear how DDR will go over with mainstream gamers weaned on Super Mario and Pokimon. "The general U.S. public is a much more laid-back style of gamer. We simply want to be taken to a fantasy world while playing, not be forced to live it or work in it," Ruta says. "The Japanese are workaholics and enjoy the difficult, challenging, physical nature of these games."

Williamson is cautiously optimistic. "[Americans] look at stuff like Samba, and they're like 'Oh my god, that's so fruity, I can't believe people play that,'" he says. "Of course, you've got to pry the maracas out of their hands after they actually try it and the addiction sets in."

Skyler Miller is a writer whose work has appeared on ZDNet, PopMatters and the All Media Guide.