The myth of monogamy

According to studies of the animal world, most of us are naturally inclined to "cheat" or at least have more than one mate in a lifetime. 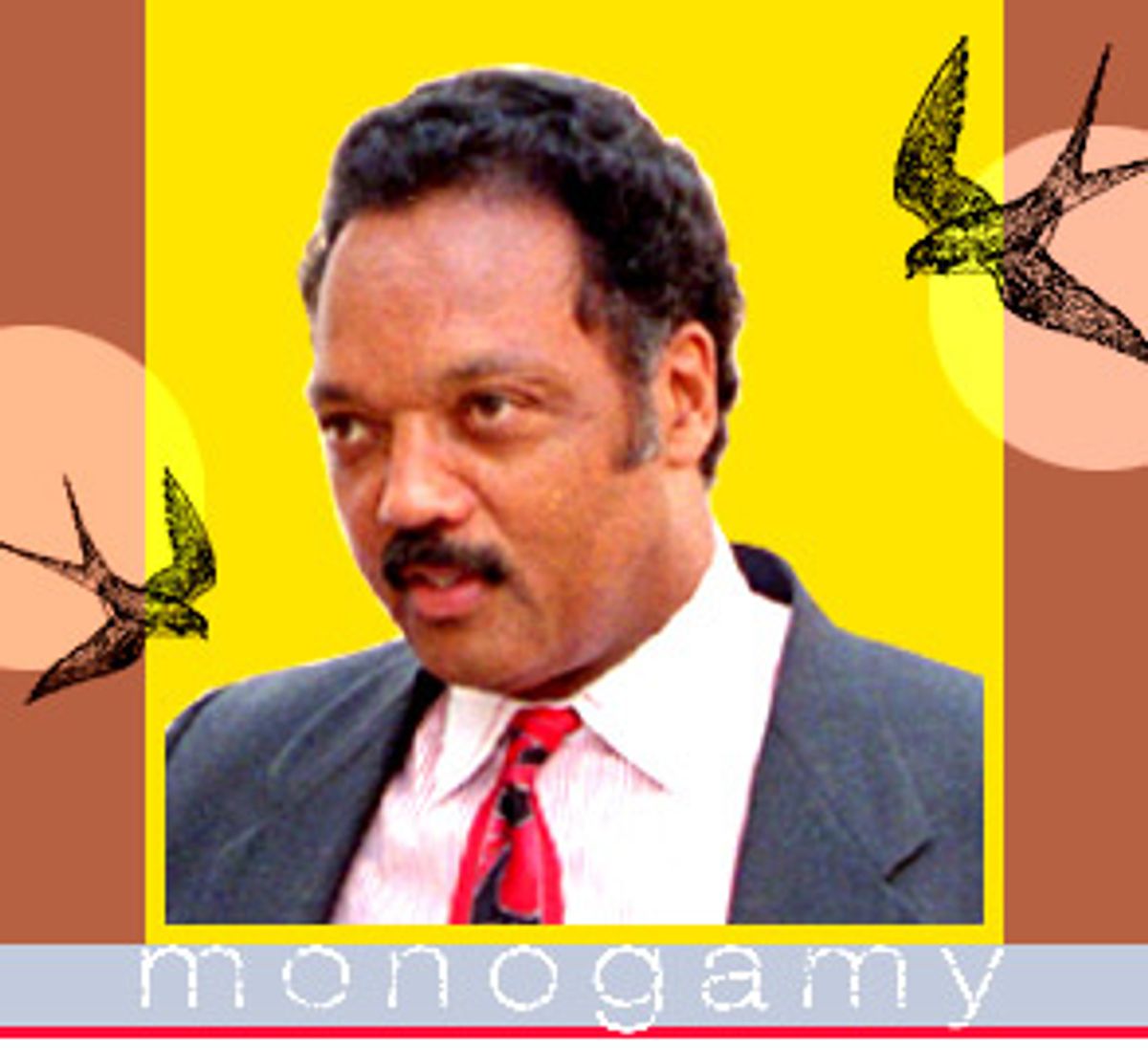 For most biologists, the fact that the Rev. Jesse Jackson had an illegitimate child by one of his staffers is neither surprising nor a revelation. We've known for a long time that males from many species tend to be interested in sexual variety, particularly in having more than one partner.

Consider, for instance, this story: A missionary visited a Maori village in 19th century New Zealand and there was a feast in his honor. After the feast, the Maori chief called out, "A woman for the bishop." Noting the scowl on the prelate's face, the obliging chief roared again, even louder: "Two women for the bishop!"

Given the choice, most men would rather have two women than one (although not necessarily at the same time). And they'd rather have three than two. As Margaret Mead once pointed out, monogamy is the most difficult of all marital arrangements. For some time, biologists have had a good idea why. Men are sperm makers. Sperm are cheap and easily replaced. Unlike eggs, they do not require that the guy doing the fertilizing become pregnant, give birth and then nurse his young.

For women -- and females of most other species as well -- the situation is quite different, and, not surprisingly, females tend to be comparison shoppers, and sexually reticent compared to their male counterparts. So the interesting thing about the Jackson affair isn't Jackson's behavior. After all, ever since "The Scarlet Letter" we've been told that even men of the cloth are still men, under the cloth. Rather, it's why Karin Stanford, his paramour, went along.

And here, biologists have finally begun to catch up with common sense. Women, too, have extramarital affairs, and these need not be limited to an unmarried woman having sex with a married man, as with Stanford and Jackson (though it has been reported that she had a boyfriend at the time of her affair with Jackson), or Monica Lewinsky and President Clinton, or Donna Rice and Gary Hart, or ... There are plenty of Madame Bovarys and Anna Kareninas. Adultery is a favorite human topic, in more ways than one.

Enter DNA fingerprinting, and not just for Monica's fabled blue dress. This laboratory technique isn't only useful for identifying unknown soldiers or freeing the falsely convicted. In recent years, it has surprised biologists with a whole new world of screwing around among animals, with likely implications for that troubled animal, Homo sapiens, the one that tries so hard to be monogamous and finds it so terribly difficult.

When we examine the genes of baby birds, even those species long thought to be absolute paragons of monogamous fidelity, we find that 10, 20, sometimes 30 percent of the offspring are not genetically connected to the socially identified father. Social monogamy (what biologists still call, somewhat quaintly, a pair bond) is not the same as sexual monogamy. Several decades ago experimenters vasectomized redwinged blackbirds in the hope of controlling their numbers. But many females, ostensibly mated to only those vasectomized males, laid eggs that hatched! Something funny was going on. But only now, with the accumulation of literally dozens of research studies using DNA data, do we know for sure: Females, even females in species long thought to be sexually faithful, often are not.

In the movie "Heartburn," based on Nora Ephron's barely fictional account of her marriage to the philandering Carl Bernstein, the heroine complains about his infidelity to her father, who responds: You want monogamy? Marry a swan.

Now we are discovering that even swans aren't monogamous!

Again, there is no great mystery about why males often make themselves available for extra-pair copulations, or EPCs. The evolutionary payoff in fathering additional children can easily make up for the costs, assuming that some EPCs result in EPFs (extra-pair fertilizations), and the cuckolded male doesn't find out and take violent revenge. Of course, an EPCing male runs other risks as well, such as possible desertion by his own mate, or the chance that while he is trying to seduce someone else's female, that same someone else -- or another -- is making time with his own! But the bigger question, yet to be resolved, is why a female, especially one already mated, should seek EPCs. The costs of discovery can be great (notably violence from her mate or abandonment), whereas the benefits are obscure. Yet seek them they clearly do.

We now know that in numerous species, females go prospecting on the territories of adjacent males, especially when their own mate is off at work, foraging or patrolling the neighborhood perhaps looking for his own EPCs. Sometimes, to be sure, females are coerced into mating, but it is clear that even mated females are often sexual adventurers in their own right, actively soliciting EPCs from males who are not theirs.

It appears that there is no one-size-fits-all explanation for female infidelity among animals. Here are a few; each is valid for at least one species. Some might also shed light on the Madame Bovarys (or Karin Stanfords) among us: For an unmated female, reproducing is generally better than not, even if -- when monogamy is the public norm -- such a reproducing female has to be a single mother. An EPC can provide a female, whether socially mated or not, with fertility insurance, just in case her current partner doesn't produce enough sperm. She might also increase the genetic variety of her offspring by bearing the children of more than one male. An especially important consideration seems to be the genetic quality of her additional lover(s). It is very rare, for example, for already mated females to copulate on the sly with males who are socially subordinate to their current mates. Among those animals in which males sport secondary sexual traits that indicate unusual health and that females find sexually stimulating (bright plumage, enlarged feathers, especially attractive body features of other sorts), females will often mate with those fortunate males who are unusually good specimens, particularly if their own mates are less than prepossessing in this regard.

Barn swallows, for example, have deeply forked tails. The deeper the fork, the greater the appeal to females. Female barn swallows paired with males whose tails are only so-so tend to sneak copulations with neighboring males whose tail forkings have been artificially enhanced by researchers. Among the European birds known as yellowhammers, older males are brighter yellow; their enhanced brightness indicates that they have good longevity genes and also makes them more attractive to female yellowhammers, especially those mated to males whose yellow is less prepossessing.

A female can also gain immediate personal payoffs from successful EPCs. In some cases, she may be permitted to forage on territory maintained by a male, provided that she first copulates with him. When several adults cooperate in provisioning the young, males often adjust their parental efforts depending on their sexual access to the female: more fucking, more feeding. By inducing more than one male to have an interest -- or think he has an interest -- in the outcome of a bout of sex, cagey females reduce their own parenting duties. There are some species, including lions and a number of primates, in which adult males are likely to kill young they have not fathered. It has been suggested that in such cases females may have evolved to be sexually receptive to more than one male as a way of reducing the risk eventually faced by their offspring.

The evidence is now undeniable: Monogamy among animals is more myth than reality. What about human beings?

Here, too, there is no doubt. We are not naturally monogamous. Anthropologists report that the overwhelming majority of human societies either are polygynous or were polygynous prior to the cultural homogenization of recent decades. They also suggest that individuals are mildly polygynous, having evolved in a system in which one man maintains a harem. This, incidentally, helps explain the persistent sex appeal of successful, dominant men, whether they be high-ranking politicians, movie or rock stars, glamorous athletes or wealthy entrepreneurs. Power, as Henry Kissinger once noted, is the ultimate aphrodisiac. At the same time, women can and do seek additional sex partners, even when already mated. Thus, monogamy -- when it occurs -- is shot through with EPCs, not just among birds. Otherwise, why would men have such a powerfully developed tendency for sexual jealousy?

Why, then, does monogamy occur at all? Maybe it's like Winston Churchill's observation that democracy is the worst possible form of government except for all the others that have been tried. At least monogamy is a great equalizer (in theory). It assures that in a species with equal numbers of males and females, no one need be left out. But at the same time, it cannot and does not prevent individuals of either sex from looking elsewhere.

Imagine a society of rigid social monogamy in which women nonetheless seek to be inseminated by the best possible males. Such males are rare, and likely to be already taken. So women might well adopt a kind of ratcheting-up tactic, in which they pair with the best man they can get, and thereby obtain his child-rearing assistance as well as whatever additional material resources he can provide, while also making themselves available for men further up in the hierarchy -- probably charismatic men like Jesse Jackson.

Such a motivation need not be conscious. In fact, a woman who has an affair with an attractive married man may intentionally avoid becoming pregnant. The point is that part of the underlying sexual motivation for the affair likely derives from these factors.

When right-wing Christian moralists worry that family values are under assault, they don't know how right they are! Monogamy, perhaps the poster child of family values, is under profound assault -- but not from any progressive, gay or feminist agenda. Rather, nature is the culprit.

We are imbued by Western culture with monogamous ideals. Yet, like other living things, we're often compelled by our biology to depart from monogamy. Neither men nor women are the primordial purveyors of extra-pair copulations, yet EPCs have dogged and delighted human beings throughout recorded history, and doubtless before. It takes two to do the EPC tango. And human beings love to dance.

David P. Barash is professor of psychology at the University of Washington in Seattle. His most recent book, "The Myth of Monogamy," coauthored with his wife, Judith Eve Lipton, M.D., is to be published this spring.