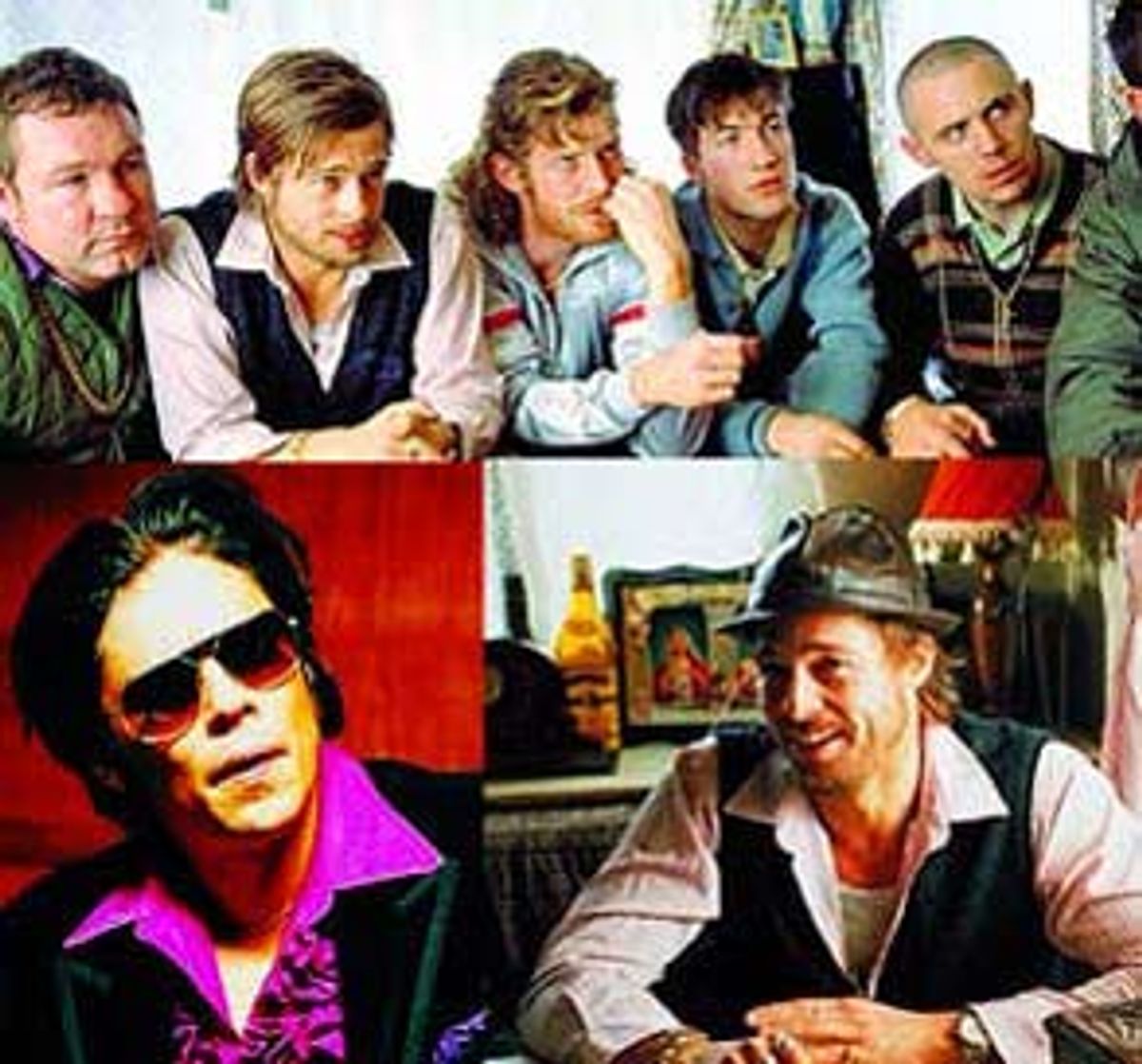 It takes a very clever schoolboy to make a movie as elaborately empty as Guy Ritchie's "Snatch." In Ritchie's world, more is supposedly more: At least a dozen characters who figure prominently in the maze of hidden doorways, curvy roads and blind alleys substitute for a plot in "Snatch." Intimidating cockney underworld thugs, none-too-bright entrepreneurial bunglers, tattooed Irish gypsy boxers and diamond thieves with comically heavy Yiddish lilts are supposed to represent a street-smart version of life's rich diversity as their paths crisscross and crash.

But writer-director Ritchie isn't interested in enjoying the labyrinthine story as it unwinds; he's fixated instead on racing to the end so he can wow us with his ability to suture up a straggly, lumpy narrative that he hasn't bothered to make us care about from the beginning. He's a showoff in the purest sense, and "Snatch" is nothing but a monkey-bar dangler of a movie.

As a stylist, Ritchie is an unusual case. He favors gritty jumbles of slow motion, foxy cutting and dialogue that whizzes by, alerting you that you should probably pay close attention if you have any interest in following the plot. But both "Snatch" and Ritchie's previous feature, 1998's "Lock, Stock and Two Smoking Barrels," suffer from an odd high-octane dopiness -- they both amble by with lightning speed. Ritchie wants you to think the action is moving very quickly, when there are actually interminably long stretches where nothing much happens at all. Early on, "Snatch" injects you with a sense of urgency. But that only intensifies the feeling of being screwed by the time the ending finally putters into view.

"Snatch" is supposed to be something of a shaggy dog story. But unlike, say, Bryan Singer's 1995 "The Usual Suspects," which feels as if it has been shaped with a scalpel (and whose characters are cut just as distinctly), "Snatch" is loose and scattered even as it pretends to be taut. As with "Lock, Stock," we're introduced to the major characters at the beginning in a voice-over narrative -- a tactic that's helpful in keeping everybody straight from the start but also a tip-off that we're dealing with a filmmaker who doesn't know how to create characters so they're indelible.

Turkish (Jason Statham, who played Bacon in "Lock, Stock") and Tommy (Stephen Graham) are low-level street toughs -- too likably benign to actually be called crooks -- who set out to make a simple business deal with an Irish drifter named Mickey (Brad Pitt) and end up sponsoring him in a fight put together by Brick Top (Alan Ford), the eminently crooked leader of an underground boxing ring. Previously, Benicio Del Toro's Franky Four Fingers, dressed as a harmless-looking Hasidic Jew, has stolen a giant diamond from some brokers in Antwerp, Belgium. Diamond dealer Cousin Avi (Dennis Farina) hopes to procure it from him, but he knows that Franky is a compulsive gambler and he wants to get the stone before it's gambled away. Meanwhile, a Russian gunrunner named Boris the Blade (Rade Serbedzija) discovers that Franky has the stone and enlists his own gang of ne'er-do-wells to capture it.

Or something like that. Ritchie has piled so many characters into his movie that none of them emerges as distinct, with the exception of a scrappy fighting dog that, after swallowing a chew toy whole, barks with a joyful squeak.

A few of the actors are reasonably entertaining: Farina, as a level-headed businessman who's also prone to tempter tantrums, tosses off his performance so casually that it seems light and energetic. Graham is occasionally endearing as Tommy, who's wrapped up in his bumbling cluelessness as much as his Teddy-boy coat.

And Pitt, with his Edwardian cartoon tattoos (his shoulders feature matching cats by early-20th century illustrator Louis Wain, crazy beasts with googly eyes and electrified whiskers) and his intentionally indecipherable brogue (his character is an Irish gypsy), brings a bit of life to the picture, especially in the way he moves. He's nimble, buff and wary, swaggering through the movie like an alley cat with a grudge.

Almost every other character fades from memory shortly after the movie's last frame. (Del Toro's role is so minor it barely registers.) Ritchie does have a knack for using music to enhance certain sequences: In "Lock, Stock," a stripper gyrated to Dusty Springfield's version of "Spooky"; here, Ritchie uses the Specials' "Ghost Town" as a backdrop for a kind of freewheeling urban angst.

But "Snatch" feels so pieced together, so patchy, that the effective parts get swallowed by the meandering whole. Even Ritchie's approach to violence is a little noncommittal, as if he doesn't dare just jump in and get his hands dirty. "Snatch" is plenty violent on its surface -- lots of guns go off and punches are thrown, and one character gets his arm lopped off with the swift stroke of a machete-like knife. But while Ritchie always shows you the action, he doesn't always show its result: We see guns being fired but few bullet holes or plumes of blood; sometimes we don't even see the victims go down.

The approach is incredibly tasteful, as if Ritchie wanted to keep his story a comic book instead of commanding his audience to get jazzed by the gunplay and spurting wounds. There's nothing wrong with that impulse; at its core, it's admirable. But in Ritchie's case it also feels slightly irresponsible -- not morally, but artistically. Most moviegoers have seen plenty of violent movies, so we know what happens when a bullet leaves a gun, and Ritchie seems to be assuming that we don't need to see it again. By allowing so much of the movie's violence to happen outside the frame, he makes the specific actions seem incomplete -- more like a failure of nerve than a conscious choice.

There's something gimmicky about the approach, too. I much prefer the violence of, say, Sam Peckinpah or John Woo to that of Quentin Tarantino, but at least Tarantino makes no secret of how he wants us to get our kicks. Ritchie's violence-by-suggestion is merely coy, and it's one of the things that drain energy from "Snatch."

If we make it to the end, we're rewarded with a small prize, the right to pat ourselves on the back for having made sense of the undulating plot. But the dancers in this elaborate reel have essentially sacrificed themselves to the dips and dives of the plot. The story may be finished, but you have the sense the characters are still out there fumbling about, bedeviled by vague feelings that, dramatically speaking, they've been misused in some way. They're 12 characters in search of an author, one who might actually give them something to do, and they're willing to work cheap.