Why can't we accept the fact that great men conduct lives of indiscretion and excess? 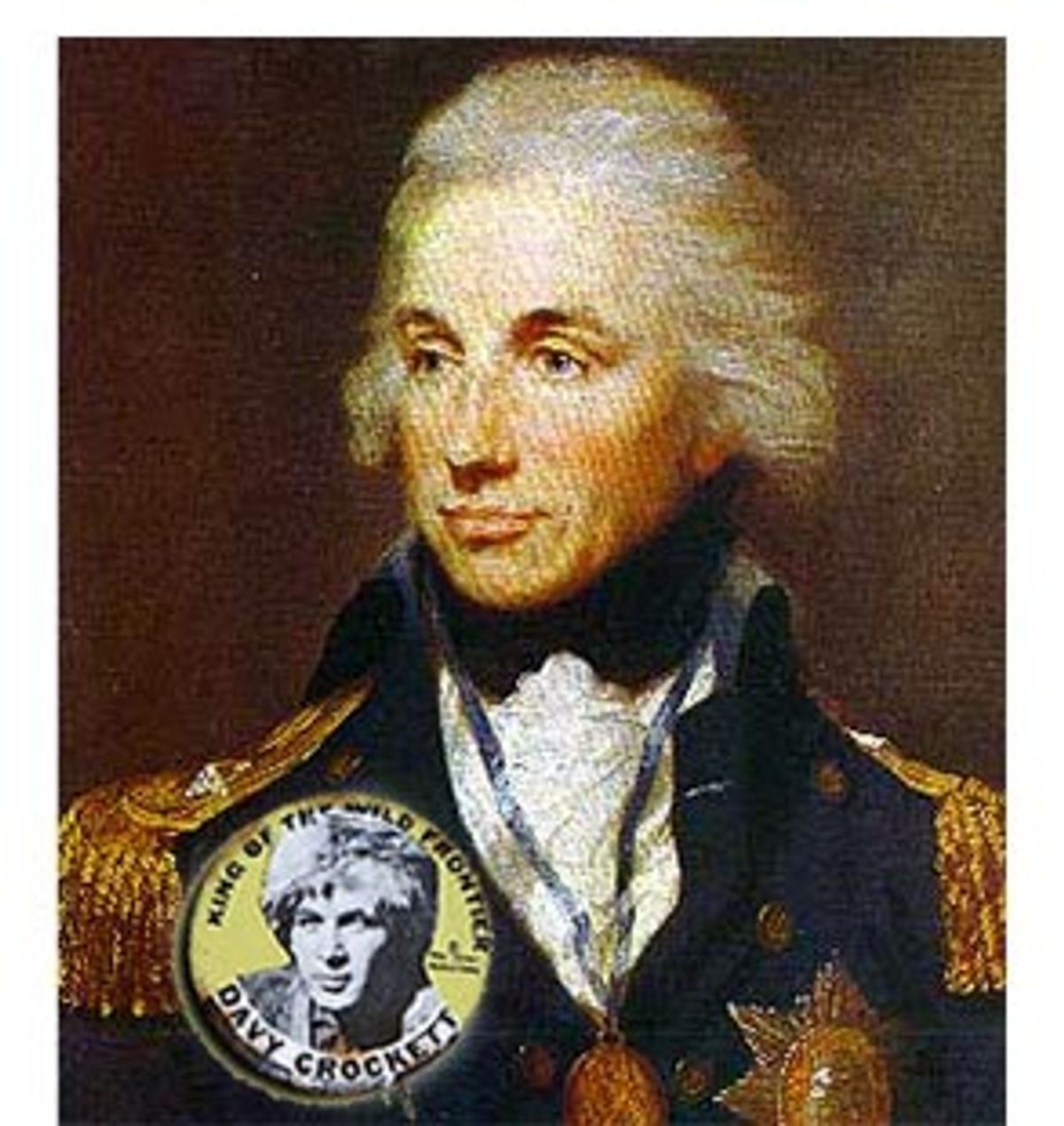 Jesse Jackson fathered a "love child." Ever notice how it's always a "love child" when Mom and Dad aren't married to each other? I guess married people only have intercourse because of the tax benefit.

Jackson got caught and made a statement. "I am truly sorry for my actions," he said. "I am father to a daughter who was born outside of my marriage."

The National Enquirer broke the news last week, running a picture of Jackson at the White House with then President Clinton and Jackson's then pregnant mistress. A damning picture in lurid color. A true story.

Good, though, to keep in mind how low on the news hog we're eating. This week's Enquirer stories include "Meg Ryan Dumped!" and "'Survivor 2' contestant to wed her son."

But that's a quibble. What worries me? We've developed a system guaranteed to keep the most brilliant people out of public life. And now we're perfecting it, tightening the net.

You don't agree? Just imagine running a 747 the way we run the nation. Moments before takeoff, we learn that the pilot -- a married man -- has been cheating on his wife. Do we really want to trust our precious bodies to a character so conspicuously flawed?

"That's what copilots are for," you say. What if the copilot, also married, is the man the pilot has been cheating with?

Now we are offended. Supposing in the airplane, as in the nation, we have to solve our crisis with the people already aboard. No smokers need apply. Many pilots have been in the military. We wouldn't want a man who'd dropped bombs on civilians. Well, by the time we got down off of our high horse, we'd have the cutest 9-year-old girl up there at the controls. Dang if she wouldn't be thinking happy thoughts, too, as she drove the plane into the terminal and killed us all in our seats.

And wouldn't it be a fine thing if talent and character were predictably linked? They're not. Since biographies are rarely written about ordinary men and women, there's no control group, and it may be that your average freelance writer or postal clerk is just as wretched and contradictory a creature as Ulysses S. Grant, or Lord Nelson, John Lennon or John Fitzgerald Kennedy. I don't know. What I do know is this: You rarely find an extraordinary man or woman who is also exemplary.

Then why are we always surprised? We don't know much about history. There's that. But also the vast engine for getting dirt on our betters is faster and technically better than it was in the past.

Envy is the driving force of our time. H.L. Mencken defined puritanism as "the haunting fear that someone, somewhere, may be happy." For a country whose music lyrics would have been banned in Sodom and Gomorrah, we have Puritans thick on the ground.

Jackson is 59 and his mistress, Karin Stanford, is 39. I suppose that makes it sound too much like fun for the American voter. The New York Post described Stanford as a "brainy activist." She wrote a book about him. She titled it "Beyond the Boundaries: Reverend Jesse Jackson and International Affairs." How many of us ever get a brainy activist in bed? Add the book, and I'm sore. It's rare enough to get a card, but a whole book -- 236 pages. About me.

No wonder I'm furious at the Rev. Jackson.

But how much bearing does this have on Jackson's public role? I wonder. He's a civil rights leader. That's what he's supposed to do, and that's what he does. He heads the Rainbow/PUSH Coalition, "a nonprofit organization that seeks economic and political power for minorities." Or that's what the New York Times calls it.

Nothing about adultery in the title.

Jackson worked with the Rev. Martin Luther King Jr., a man who also looked for love in lots of places (a fact notably missing from the school presentations about him to which both of my children were subjected on the recent holiday that bears his name) -- which will make it easier for us to turn our back on the next Martin Luther King Jr., should we be fortunate enough to find one.

To go into public life in this country today, you have to combine the purest possible motives with a willingness to be accused of having the worst.

It breaks my heart, but I'd guess that many of the best and the brightest have figured this out and are staying home in droves.

But Disney heroes are works of the imagination. I grew up on Davy Crockett (1786-1836). I sang the song. I owned a coonskin cap. I remember how shocked I was to read some of Crockett's diaries. At one point he shoots an Indian woman. She troubles him by not dying quickly enough. Crockett was an extraordinary man. He was a hero. Not a Disney hero, though. Not by a long chalk.

Horatio Nelson (1758-1805) was the hero of Trafalgar. He lost an arm, an eye and finally his life in the service of England. He also fell foolishly in love with somebody else's wife. Yes, he was married at the time. He paraded around Europe with Lady Hamilton, and wore absurd uniforms. Ultimately, he had a daughter with her, whom they named Horatia. Now there's a name I wouldn't want to have to defend on the playground.

Churchill, you say. I knew you'd bring him up. Sir Winston Leonard Spencer Churchill (1874-1965) was a great leader who seems never to have had a mistress. Maybe so, but he was also an insufferable snob. He never wore anything but silk next to his skin, and had champagne with breakfast. Eleanor Roosevelt cringed when he came to town because he kept FDR up late drinking, smoking and talking. His father died of syphilis. And I just read a biography in which his wife had an affair. Which we can understand. The man who came to embody the English lion was definitely not a gym rat. What if the National Enquirer had published a picture of that man naked on the beach? A glance at that physique might have put an end to his political career. Then who would have faced down Hitler for us?

Grant (1822-1885) led the Union armies to victory. He couldn't get the job today. At West Point he graduated near the bottom of his class. After he briefly demonstrated talent in the Mexican-American War -- an unjust conflict that today's high-minded public would have held against him -- his career sputtered and went out. He was a drunk -- a drunk still drinking when Lincoln spotted him. (Not to mention his cultural achievements. "I know two songs. One's 'Yankee Doodle.' The other's not," he used to say. And he said, "Venice would be a fine city, if drained.")

Grant didn't make a very good president, but when it came to war, he knew how to keep at it. Lincoln took a chance on him back then. Today, we wouldn't even take a chance on Lincoln. He was a melancholic, married to a nutty wife with a dagger for a tongue.

My knowledge of history is not sufficient to do all the Founding Fathers for you, but suffice it to say that Matt Drudge would have had a heyday.

And of course there's Thomas Jefferson (1743-1826), the man who wrote the Declaration of Independence and who also fathered children with a slave named Sally Hemings and owned slaves. He managed his money so badly that at the end he was afraid he wouldn't be able to afford the land for his own burial.

The great men of every time have been hounded, I suppose. Socrates was given hemlock. They put Ezra Pound in a cage. Oscar Wilde was jailed. Meet them on the street, we'll bow and scrape and pull the forelock. Later at the pub, we'll toast their early death. How dare they be so much better than we are?

Must we always martyr our betters? Maybe. But let's not be so quick about it. Let them fly the airplane first. Let's make certain that the dirt we've found has some bearing on the job we need done. Let's make sure it's caution we're acting on and not envy, or simple malice.

Listen, I understand the compulsion. I've always been a goody-two-shoes myself. My father was a much greater writer than I am. He was also famously unfaithful to my mother. I'm faithful to my wife. Tsk-tsking is fun. I wouldn't want to have to give it up. But remember that this is entertainment, not news.

Having threatened to leave public life, Jackson was back on TV this week with his wife of many years. Both of them were smiling. Let's smile back. If she can forgive him the brainy activist, then so can we.

We need pilots who can fly and leaders who can lead. We need giants, men and women better than ourselves, and also not as good.

Benjamin Cheever is working on a book about the job market, due to be published next fall. His last novel is "Famous After Death."