Disaster in the Gal

It may take years to measure the ecological destruction caused by the oil spill near Darwin's outdoor laboratory. 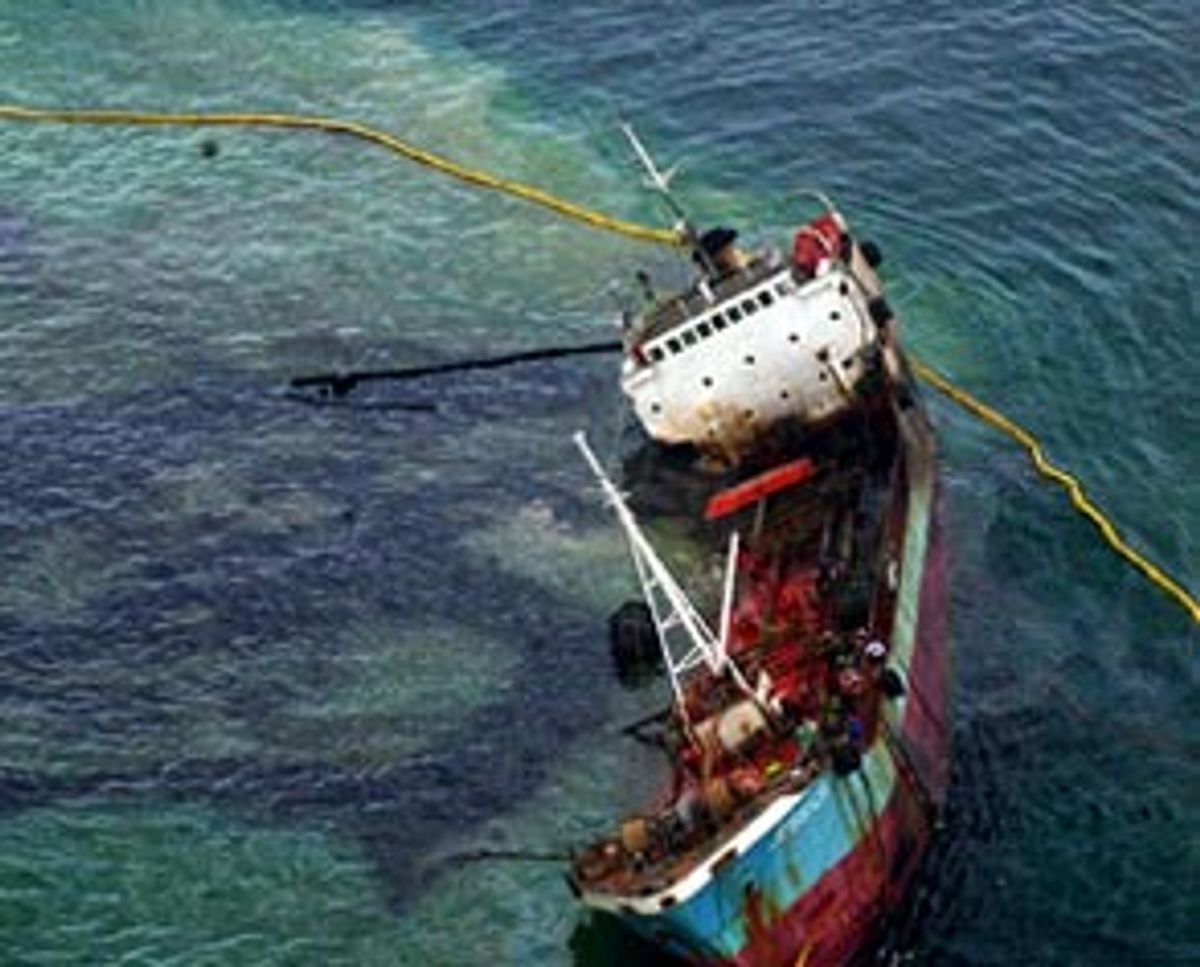 As fuel from a grounded ship washes up on the shores of the Galápagos Islands -- where Charles Darwin developed his theory of evolution in the 19th century -- environmentalists are criticizing the Ecuadorean government's response, which they believe has been too slow.

So far, the toll has been limited: One pelican is dead and four sea lions injured, their prognosis uncertain. But environmentalists say we may never know just what species perished or became extinct because of the accident, since the archipelago is home to so many animals, many of which haven't even been documented yet.

The accident occurred when the Ecuadorean-registered ship ran aground on Jan. 16. By late Friday, diesel and bunker fuel began to leak from the Jessica, polluting the sea with an estimated 170,000 gallons.

Already there are reports of oil washing ashore on San Cristobal Island, about 800 yards from where the boat lies tilted at 60 degrees on its side, and as far away as Santa Fe Island, 37 miles west. The islands are home to many endangered species -- and many animals that are endemic to the archipelago. Ecuadorean President Gustavo Noboa declared a state of emergency Monday night. "There's going to be a lot of damage," says Ximena Vallejo, communications director for the president. "Right now we are asking for all of the international help that the world can give to us. We have to take care of this no matter what." But there has been mixed government reaction to the spill. On Tuesday, Ecuadorean Environment Minister Rodolfo Rendon described the spill to reporters as a "problem, not a tragedy."

For their part, environmentalists paint the accident as something that could have been prevented; irreparable damage has occurred because, they say, the Ecuadorean government took too long to act. "Since Jan. 16, we understand that the thing went aground but [the Ecuadorean government] have done absolutely nothing," says Natalia Arias, president of Accion Ecologica, a local ecological group. "The problem is they waited until it all leaked out and say let's put [up] barriers. But it would have been more efficient to suck the oil out of the tanks to another tanker because they had days and days of notice."

But according to President Noboa's spokeswoman, Vallejo, Ecuador requested international help on Wednesday, the day after the accident. Due to bureaucratic delays, Vallejo says, it took the U.S. State Department until Saturday to authorize the U.S. Coast Guard to provide assistance. Vallejo says Ecuador requested help because the country does not have the resources to handle a large-scale oil spill. "We were trying to remove it, but we have don't have the equipment," she says. "We wanted to avoid this." Meanwhile, the Ecuadorean government places the blame on the helmsman of Jessica, and has launched an investigation into the matter since the helmsman reportedly was not properly licensed. (The ship's captain was reportedly out sick that day, Vallejo says.)

The United States Coast Guard National Strike Force, a response team that handles oil spills, arrived on Sunday and has been siphoning fuel off the boat. But that work has been complicated by the condition of the ship. "Essentially, it's easier to walk on the walls than on the floor so it's difficult for measurements," Rick Wester, spokesman for the U.S. Coast Guard, says of the listing ship. "Also, it now looks like there's significantly less oil remaining on board, and that implies that more fuel has been spilled than what we initially estimated," he says. It's difficult to say how much fuel has seeped out, but authorities believe that only 10,000 gallons remain onboard a ship that carried 240,000 gallons of fuel.

"Once the fuel is out, it's very hard to do anything about it," says Peter Kramer, Ph.D., a zoologist with the World Wildlife Fund, and former president of the islands' Charles Darwin Foundation. "You can protect a few animals, and wash them, but once this has happened, one must not delude oneself. This is a catastrophe that has terrible consequences." Kramer says that while diesel spreads quickly and is a problem for days or even months, bunker fuel, which the ship was also carrying, is heavier, sinking down into the water and persisting for years. Oil can be deadly to animals that ingest it, either directly or by consuming other animals that were poisoned by the spill. In addition, Kramer says, if oil gets into the feathers or fur of an animal, it can lose its natural insulation and then die from the cold.

But even taken at its largest estimates, the total spill would be much smaller than the notorious Exxon Valdez spill. On March 24, 1989, the tanker ran aground in Alaska's Prince William Sound, dumping 11 million gallons of crude oil into the waters, killing an approximate 300 harbor seals, 2,650 sea otters, and hundreds of thousands of birds, most of which were never found. But it's not so much the amount of oil that is spilled that accounts for how big a disaster an oil spill is; environmentalists say it's where the accident occurs. "The Exxon Valdez is on record as causing the greatest kill of wildlife because the time of the year and the area in which it occurred, which had a great abundance of wildlife," says Paul Horsman, oil campaigner for Greenpeace International. "At this stage, it's difficult to put it on a rank of order. For sure we can say the potential impact is great because the Galápagos contain such a wide range of marine life and a lot of species, which only occur on the Galápagos Islands."

Dan Lawn was one of the first to arrive on the scene after the Exxon Valdez spill. At first, he says, it was difficult to ascertain how many animals had died because it was during migration season. The sound was still full with birds after the accident occurred; it was only much later, when migration ended, that they noticed the real degree of carnage. "If you have a population that has found a niche in the area and you oil them, they all die," Lawn says. "It's hard to see that they're all dead as you have new influx of animals during migration. But after migration is over you have the sound of silence."

But Kramer says that most of the wildlife in the Galápagos lives there year around, so he believes at least some of the damage will appear soon. The marine iguana, for example, lives within a space of 100 feet its whole life, feeding off algae in the water. But still, there are birds, like the phalarope, which migrate to the area every winter; and dolphins could also be affected because they could ingest contaminated fish. Of course, an oil spill can affect everything in the food chain from the microorganisms, like algae, to crabs to tortoises.

On Tuesday, Ecuadorean authorities reported that strong winds have been pushing the fuel out toward the open ocean, away from the fragile ecosystems of the Galápagos. Now environmentalists hope that rescue efforts to protect the wildlife will be successful. The problem, with diesel, they say, is that since it's clear, it's almost impossible to tell if an animal has been oiled yet -- even though it burns on the skin like gasoline.