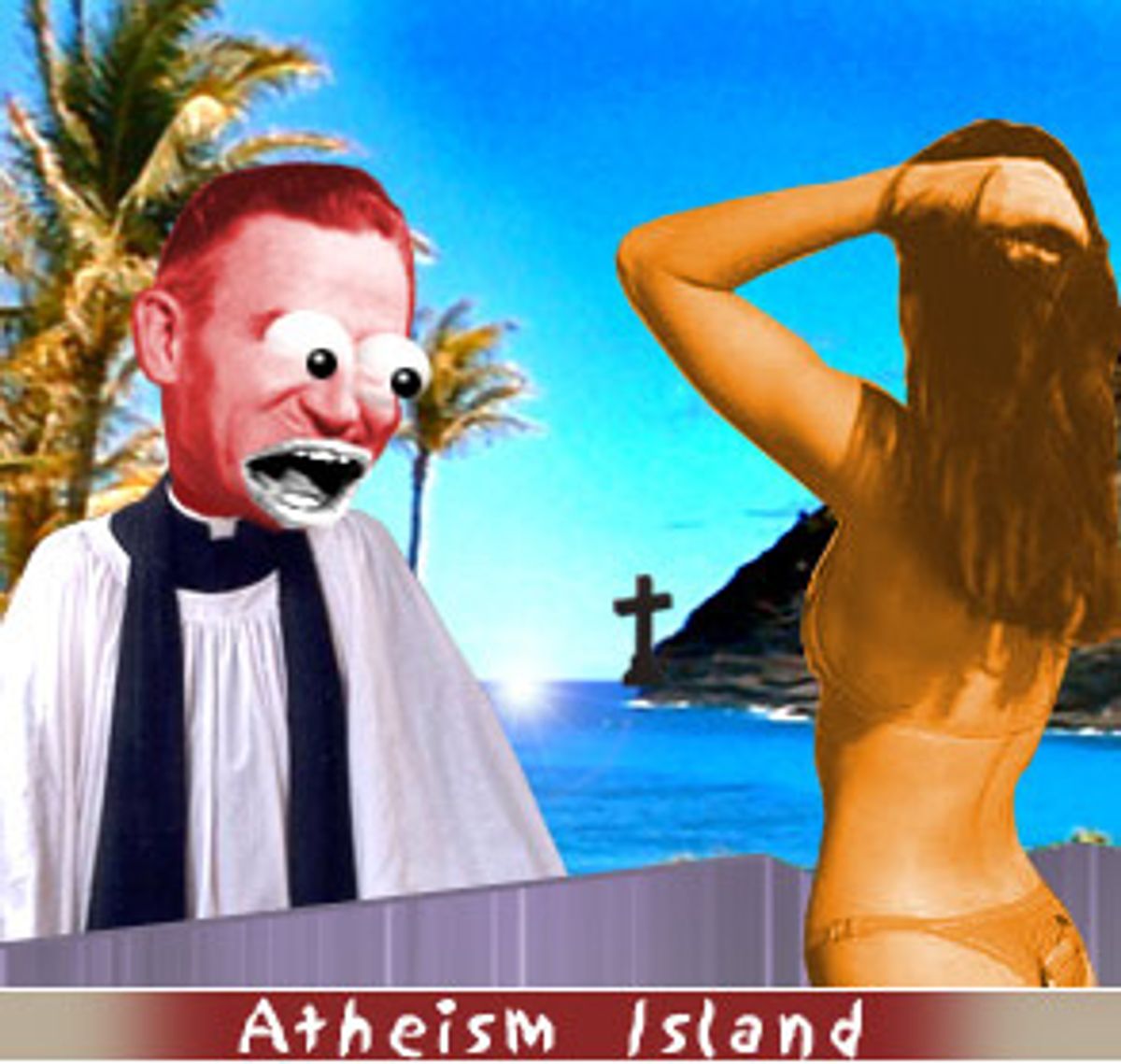 Here are some of the ideas we tossed around at last week's brainstorming session. I think we have some worthy successors to "Temptation Island" in here. Remember, these are CONFIDENTIAL -- even if you end up on "Reveal Trade Secrets Island"! Ha ha. See you all on Thursday.

What are we selling?

"Sun, Surf and Other People's Weakness of Will"

"An Offer You'd Like to Think You Could Refuse If It Were Made to You, Which It Never Will Be"

"Moral Dilemmas, on an Island"

WHAT'S ON THE ISLAND: Steamed veggies and brown rice are available -- but the entire island is filled with rich, greasy treats! (Product placement galore!) Burgers, pizza or falafel stand every few feet. (Could use Manhattan as island?)

TAG LINE: "Watch these would-be waifs get their just desserts!"

MONEY SHOT: Discarded broccoli in the sand; tilt up to contestant gobbling nachos.

TAG LINE: "This Tuesday, one of these workaholics will be rolling over his 401(k)!"

MONEY SHOT: Contestant gets an urgent voice mail from his old job; everything at the office is falling apart without him! Will he return the call?

CONS: Do any up-and-coming new-media firms still exist? For that matter, any company loyalists? Research.

WHAT'S ON THE ISLAND: Compromises, compromises everywhere! Trained mediators make the most moderate legislation seem soooo expedient. And the constituents and lobbyists are 10,000 miles away ...

THEME SONG: "Clowns to the left of me/Jokers to the right/Here I am/Stuck in the middle with you."

CONS: Could actually end up passing some weird laws. To remedy this: Veto Island?

THE CONTESTANTS: Recovering addicts of all stripes

WHAT'S ON THE ISLAND: This one speaks for itself. Nicotine Cove, Booze Beach, Heroin Haven etc.

MONEY SHOT: Discarded can of ginger ale in the sand; tilt up to contestant swilling Wild Turkey.

TAG LINE: "Keep the faith? They haven't got a prayer."

MONEY SHOT: Priest turns his back on church (Note: We'll need a church) and walks away from it, toward a hot woman.

CONS: What if there's a God? Won't He punish us for this? Research.

"Windows Island": Die-hard Apple users brought to an island filled with inexpensive PC hardware and software. "They came here 'Thinking Different.' But will they leave through ... the Gates?"

"Sell Out Your Own Mother Island": Mothers set loose as fugitives; mama's-boy types (Jewish, Italian?) offered increasing sums to reveal whereabouts. N.B.: Be careful to screen out contestants who secretly hate their mothers to begin with.

"Go Home Before 9 p.m. and Retain Some Semblance of a Family Life Island": The popularity of this idea seemed to suggest that the meeting had gone on too long. Meeting adjourned. -- M.K.