"The Hole in the Universe" by K.C. Cole

An engaging new book explores the riddles of space, from string theory to the possibility that the universe is a holographic projection. 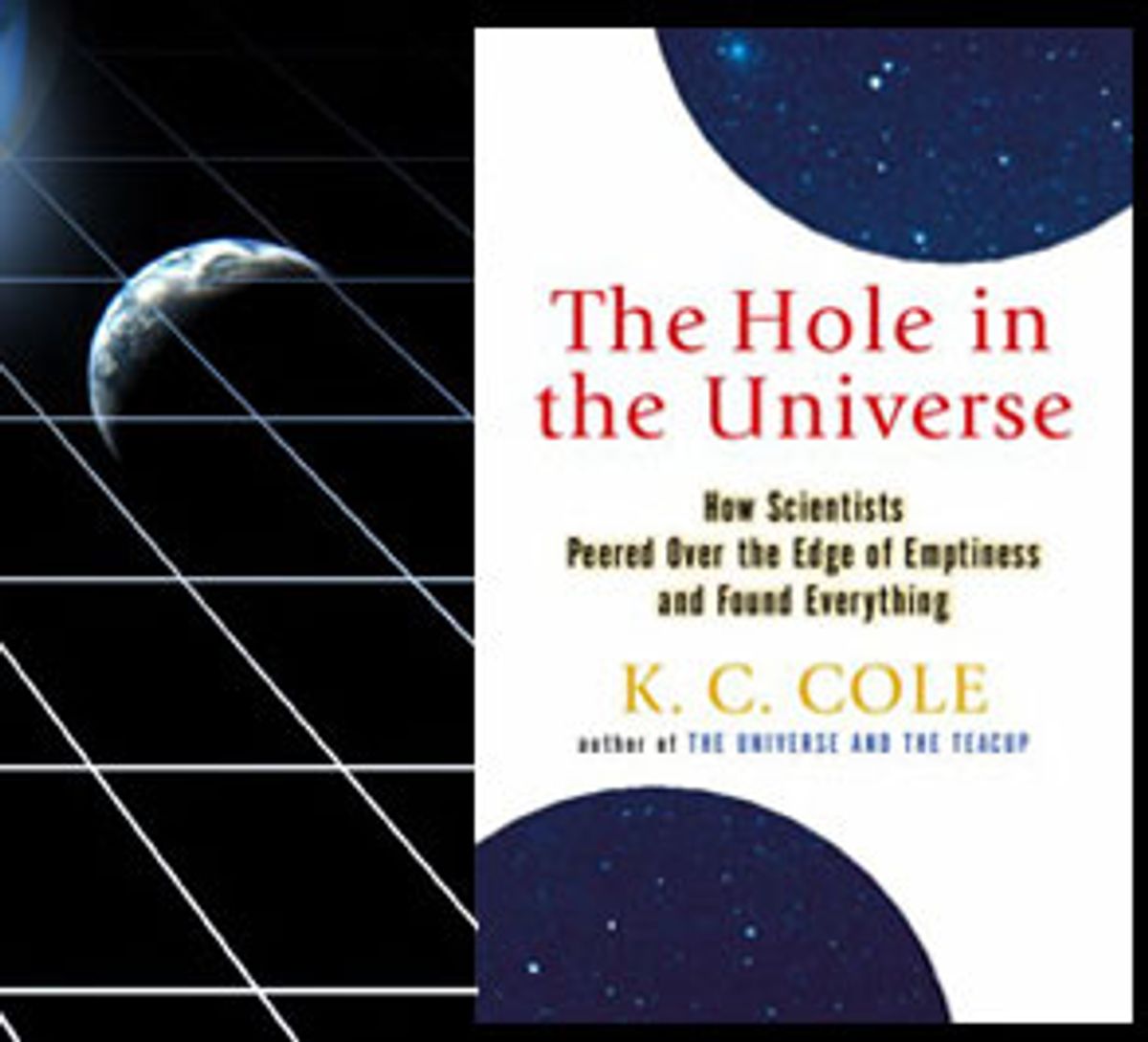 K.C. Cole's new book is about nothing. "Nothing is far and away the most difficult subject I have attempted to pin down on the pages of a book," she writes in a foreword. "Grasping 'nothing' requires resisting the temptation to follow it wherever it leads, getting lost in the semantic thicket of Nothing puns, or simply bouncing the idea around on one's knee, stringing together curious facts and ancient history -- taking it for a pleasurable, if rather pointless, trip."

Cole resists two out of three temptations. "The Hole in the Universe" covers current physics and cosmology in simple, energetic prose, without much knee-bouncing or idle following; but Cole indulges in such a tangled thicket of overly cute nothing puns in the first chapter that I'm tempted to say the real book starts on Page 25. Only then does she get down to explaining, clearly, why the vacuum of space is a deep modern riddle.

She starts with a brief, engaging history of zero as a mathematical idea. (The ancient Greeks avoided it; the Italian Fibonacci introduced it with the Arabic number system to Europe, in 1202, where "it was promptly denounced as 'heathen.'") Then she details the 19th century notion of a luminiferous ether, which Einstein discredited. "To physicists of Newton's time and after," Cole writes, "the ether was the necessary mode of transportation for waves of light. After all, if light was a wave -- as most people at the time thought -- then there had to be some medium for it to wave through." The luminiferous ether supposedly filled the vast reaches of space like an ocean.

Einstein disposed of it, though, by proving that light acts as a particle as well as a wave. "Light didn't need a carrier, or even space, to travel through," writes Cole. By clarifying the nature of light (and matter), Einstein simplified a mess of contradictory theories and worked a revolution that physicists are still trying to understand. The result, ironically, is a modern version of the old ether, a vision of so-called empty space cluttered with neutrinos, dark matter, antigravity and multidimensional strings. The fact that the void of space doesn't act like a void is the problem (Einstein predicted it wouldn't); and modern physics has a menagerie of strange theories to explain why.

One of the strangest, of course, is superstring theory, or M-theory, which Cole explains in a brief, lucid chapter. "As described by M-theory, the entire universe arises from the harmonics of vibrating strings, membranes, and blobs in eleven dimensions." These strings underlie particles as fundamental building blocks of the universe, meaning their "mode of vibration" determines the identity of a particle (electron, proton, etc.). My favorite part of this chapter is the segment titled "Strings of what?" I was happy to see a science writer pose this question point-blank. But then Cole quotes the Harvard string theorist Andrew Strominger: "You're not allowed to ask that question. That's it. It's just the thing." Oh.

String theory makes sense only because it solves certain insoluble problems. In the last five years it's moved from the faddish fringes of science to a more central, respectable place, mainly because it "resolves the glaring mismatch between the laws that rule the large-scale cosmos (Einstein's theory of gravity) and those that run the microcosmos (quantum mechanics)." No one claims to understand it fully; string theory just seems to work.

One extension of it by Stanford's Lenny Susskind proposes to explain the universe we know as a holographic projection (via vibrating strings) from a lower, simpler dimension.

"It would mean [writes Cole] that if you want to describe the universe and everything in it -- gravity, particles, planets ... -- the correct information you need to do that lies not on the three-dimensional 'interior' we take to be the real physical world. Instead, it is encoded on a lower-dimensional surface. Like a hologram, the universe is a projection of the information on this boundary into space."

This sounds suspiciously like Hindu dogma to me, but Susskind stumbled on the theory while he was studying something else, and the mathematics have been worked out in detail by the Harvard physicist Juan Maldecena. "Most of us think it's an absolute fact," says Susskind.

"A Hole in the Universe" covers roughly the same territory as Stephen Hawking's "A Brief History of Time," with the benefit of 10 years' additional research. Since Cole is a science columnist for the Los Angeles Times, not a physicist, her style is breezier and less exact than Hawking's. She goes in for too many of the nothing puns and uses certain analogies that aren't airtight, but overall the book is a strong and sometimes mind-blowing introduction to the edges of modern physics. Its real problem is the tantalizing, unfinished state of physics itself: The book leaves behind so many baffling contradictions that the most glaring void, by the end, seems to be the lack of a present-day Einstein to make it all make sense.