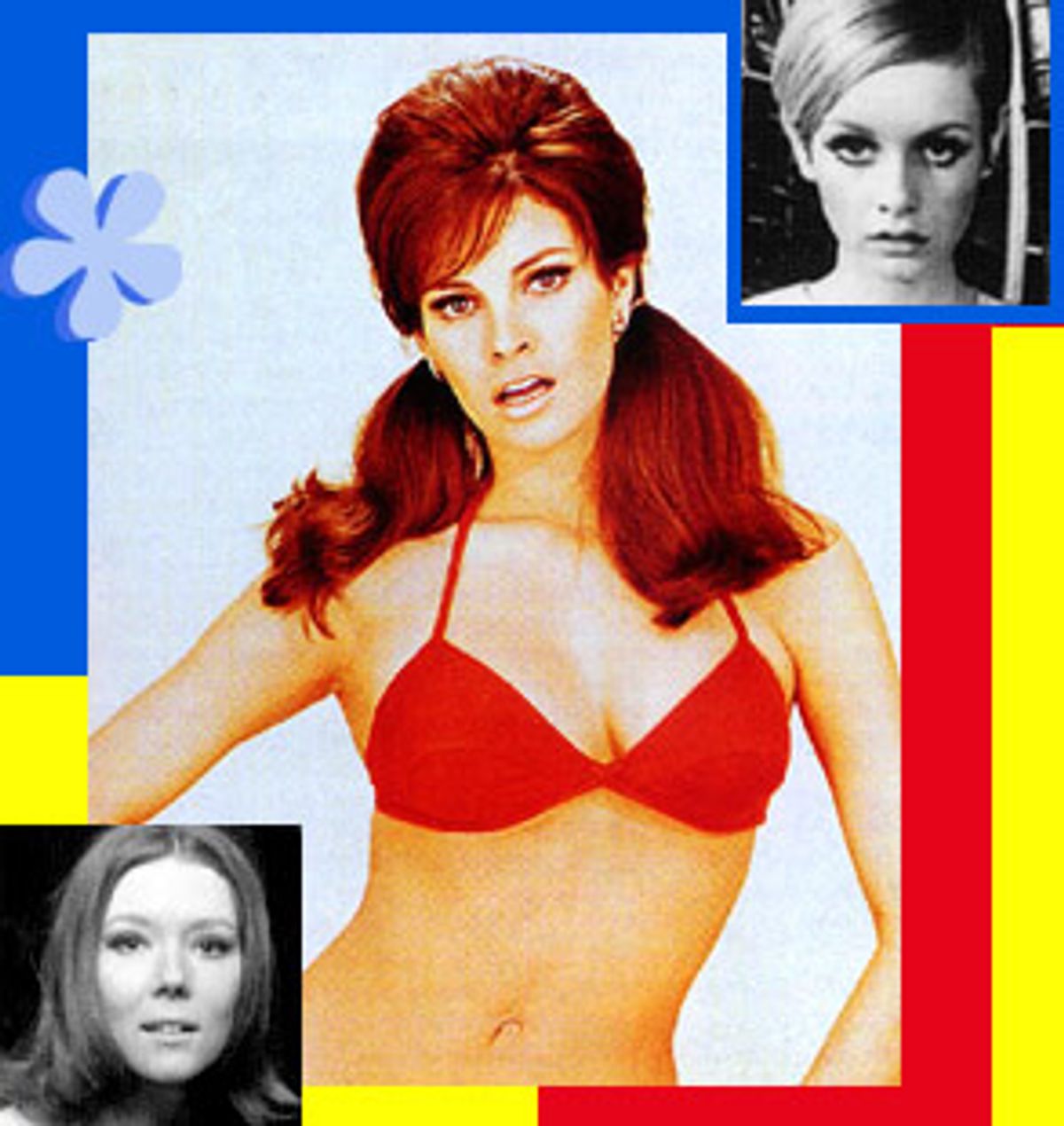 The same goes for all the other bell-bottom-wearing babes of that era: Squeaky Fromme and Laraine Newman; Jodie Foster and Angela Davis; Stevie Nicks and Joan Didion; MacKenzie Phillips and Karen Allen; and so on. Though usually thin and out of shape (no one exercised back then, thank God), they all seemed so radical, intelligent and hip. Even to this day, I'm haunted by them. Today's women don't quite seem to live up to their legends. No doubt this is because the cultural ascendancy of those me-decade femmes intersected with my then nascent interest in the opposite sex.

My theory is that we're ruined by the sex objects we encounter once masturbation becomes our adolescent raison d'être. Your babysitter, your parents' best friends or the folks on the tube night after night, that's who you lust after. Because of the sweater queens of the '50s, guys who grew up then are often, well, tit fiends. For me, it was the fleshy yet anorexic, coke-snortin' nymphomaniacs of the "Boogie Nights" decade who yanked my crank. But for Chris Strodder, author of the recent coffee-table compendium "Swinging Chicks of the '60s," it was those go-go-boots-wearin', candy-colored miniskirt-sportin' nymphs of the Age of Aquarius who left him pie-eyed with infatuation.

"These were women who, it seemed to me, set some sort of standard and represented the times," says Strodder, 44, of the 101 '60s chicks chronicled in his tome. "There were a few with an edge like Grace Slick or Janis Joplin, but most were like Goldie Hawn -- spirited and fun, laughing and colorful, always expressing themselves with great haircuts and style. A teenybopper in an orange miniskirt, that's typical. Like the British model/actress Twiggy. You could just look at a picture of Twiggy and say, 'Wow, that's 1966!'"

Strodder cuts a wide, and unfortunately PG-rated, swath through the decade's celluloid and cathode-ray selections of perky female sexuality. Fired by boyhood remembrances of Angela Cartwright, the tinfoil-covered teen astronaut Penny on "Lost in Space," Strodder compiled a bio of the erstwhile star, detailing her current incarnation as the proprietor of a Southern California gift shop, and e-mailed it to his friends. Soon, his pals were putting in requests for the likes of Petula Clark (singer of the 1965 hit "Downtown"), Sue Lyon (the original movie Lolita) and Dawn Wells (Mary Ann on "Gilligan's Island").

The popularity of Strodder's bios soon demanded a Web site and, voilà -- the rest can be accessed with a mouse click.

According to Strodder, the site, which launched in 1998, still gets more than 30,000 hits a day. Certainly its traffic helped convince his bosses at Cedco Publishing, where he still toils as the company webmaster, that a calendar and book would be the perfect way to cash in on Strodder's extracurricular activities. For Strodder, it meant a chance to dig deeper and interview the women who haven't passed away or become recluses.

"The more I researched them, the more I came to admire them as pioneers," says Strodder. "Now it's a lot more accepted for women to become writers or successful athletes, or go into politics. Back then, the women who did those things were often the first ones. They were leading a revolution and they knew it. For me, their stories transcended how attractive they were."

It's a cliché, but very true, that the 1960s changed everything for American women. The decade saw the rise of the birth control pill, first introduced in 1960; the antiwar and civil rights activism that engulfed the nation; the sexual revolution; the emerging women's movement and "war between the sexes." All of these factors gave women an unprecedented amount of freedom that, in turn, emboldened them to agitate for parity with men.

Platinum celluloid goddess Mamie Van Doren began her career in the early '50s as a Vargas girl, Howard Hughes/RKO starlet and then busty man-eater in teen exploitation flicks like "High School Confidential" and "Teacher's Pet" (each released in 1958). For her, the '60s meant a major transformation, but one she embraced.

"The '60s were definitely more fun than the '50s," she said during a recent phone interview. "It was like opening Pandora's box. The '50s were very conservative. There was so much censorship and no freedom of abortion or anything for women. I think women went wild once things started to open up. There are swinging chicks now, but a lot of them have no idea. They take a lot of that freedom we have today for granted."

Van Doren was a "bad girl" in the '50s, constantly being harassed by the notorious Hays Office and the Legion of Decency. Mothers didn't allow their children to see her films, if they could help it, though that reputation often increased her box-office cachet. Once the '60s hit, Van Doren became just one of a variety of bad girls. But she didn't mind a bit. "I welcomed the change," she says. "And I swung right along with everyone else, burned my bra and really did become my own person."

Van Doren was more of a '50s vamp than anything, but she successfully made the transition and to this day, through her erotic, nipple-print-selling Web site, carries on the tradition of the glamour queens. But the majority of Strodder's picks are more like Sally Field (circa "Gidget"), Tina Louise (another "Gilligan's Island" refugee) and Barbara Eden ("I Dream of Jeannie"). Looking back, they seem particularly unchallenging, cartoonish even. Strodder also includes two animated characters -- Judy Jetson from "The Jetsons" and Veronica from "The Archie Show." It's somewhat telling that, for the most part, the cartoons blend right in with their live-action counterparts.

Strodder's choices get interesting for me when they presage an edgier vibe. Rockers Slick, Joplin and Tina Turner kick boo-tay like the guys, and their sexuality is aggressive, almost hostile. Warhol favorites Nico and Edie Sedgwick represent the darker, slightly satanic flip side of the decade. Vanessa Redgrave and Helen Gurley Brown seem downright chilly and cerebral juxtaposed with the rest of Strodder's litter. And Jane Fonda is impressive considering what she would transform herself into, though her '60s "Barbarella" phase seems silly in light of her '72 visit to North Vietnam or her Oscar-winning performance in "Klute."

Even Michelle Phillips of the Mamas and the Papas, pictured in Strodder's book wearing a slinky, Girl Scout get-up while strolling through Beverly Hills smoking a joint, exudes some of the attitude that, say, Hawn lacks. Not to dis Hawn, or any of the others. It's a matter of personal preference, of course. But when faced with the choice between the spunky, neon-pop divas of the '60s and the smoldering, dressed-down '70s sirens they evolved into (Joni Mitchell, Laura Nyro, Carole King, Ann and Nancy Wilson of Heart and so on), I'll always choose the latter. Maybe it's their seriousness, their stridency or their unaffected beauty. To me at least, the women of the '70s fulfill the promise of those rebellious '60s chicks.

Strodder's book is just a bagatelle, something to kill time with on a coffee break. But it does make you think about what's gone before. It made me realize how much I miss those radical '70s babes, many of whom started out in the late '60s, like Katharine Ross in "The Graduate," running off with the guys their parents hated, and living in opposition to what conformist society said was right. Being born in '67 to just such a woman, how could I not admire the lot of them?