Abortion rights groups say that the pro-life president is in the minority, but polls suggest that could be changing. 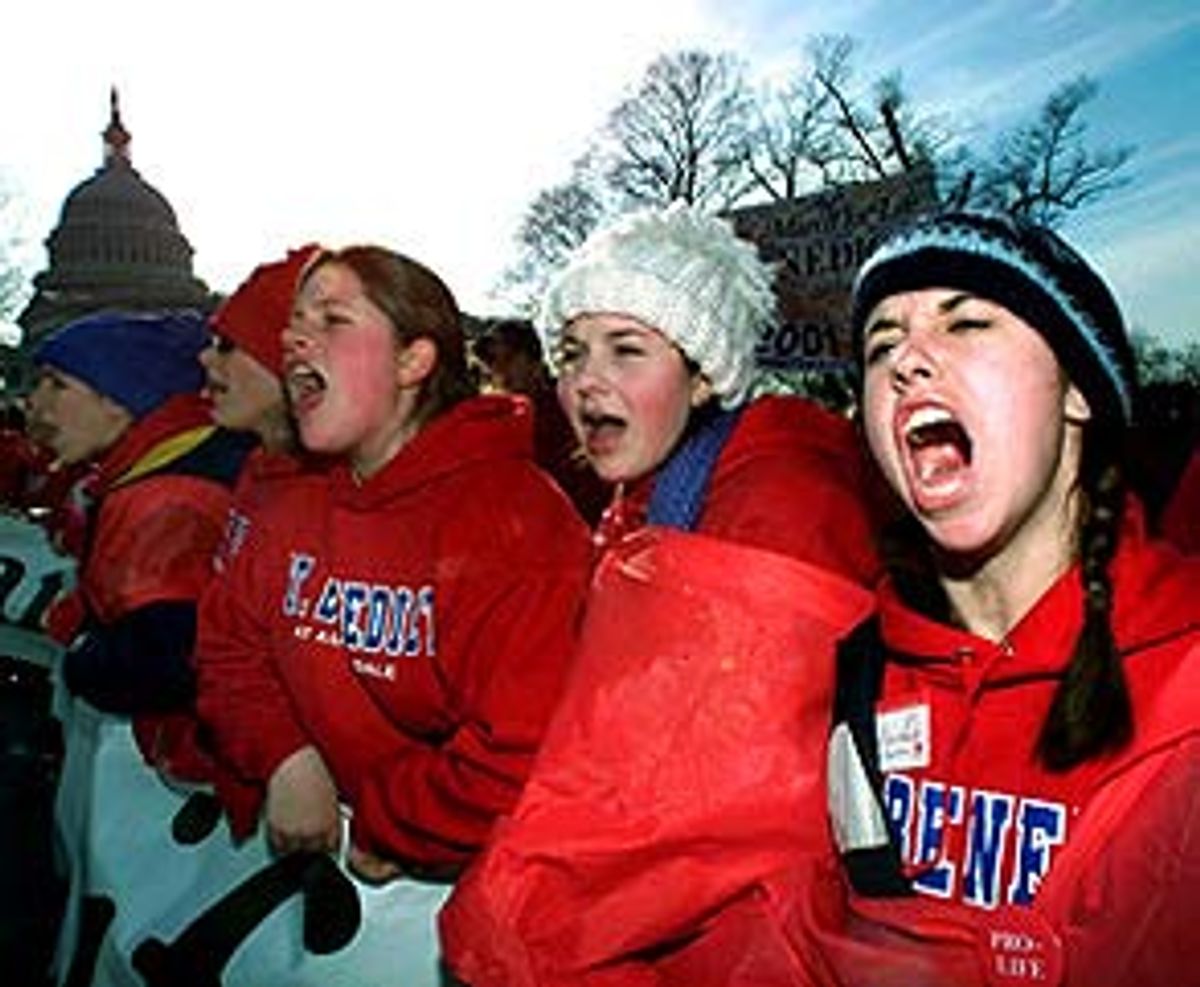 The big guns of the abortion rights movement -- Planned Parenthood, the National Abortion Rights Action League, the National Organization for Women -- have of late been trying to cast President Bush as outside the mainstream.

He reinstated the "global gag rule," barring federal funding of international family planning organizations that offer abortion services, sent a message of support to activists at the recent March for Life rally in Washington and nominated a stalwart abortion opponent, John Ashcroft, to be the nation's top cop. And in the process, the big guns tut-tut, he has thumbed his nose at public opinion.

Perhaps more important, the newest generation of voters seems less inclined to be as reflexively pro-abortion rights as their predecessors. The same Gallup survey showed that 40 percent of 18-to-29-year-olds believe access to abortion should be further restricted. The proportion who felt this way was smaller for every other age group. This, of course, could just represent the extremes of youth: The survey also found that 23 percent of 18-to-29-year-olds want to loosen existing abortion restrictions, the highest percentage of any age group.

In a survey completed by UCLA's Higher Education Research Institute in 1999, approximately 52.7 of the nation's incoming college freshmen said they believed abortion should be legal. Though that proportion is consistent with the 50.9 percent rate in 1998, it's a substantial drop from the 64.9 percent pro-choice rate in 1990, at the end of the Reagan-era "culture wars" that abortion rights groups generally claimed victory in.

If these small changes bloom into a trend, it will be bad news for a movement that has traditionally relied on the energetic support of the young. What explains this erosion of support among the reproductive rights crowd?

One possible culprit: bossy boomers. Amy Richards, coauthor of "Manifesta," a book about the generational dynamics of feminism, thinks the answer lies with the abortion rights movement's baby boomer leaders being unwilling to share power. "The anti-choice people have included young people in their movement," she says. "The pro-choice side just hasn't done that."

The abortion rights movement, according to Richards, 31, is stuck in a time warp in which baby boomers continue to dominate the organizational power structure. As both an activist and a writer for Ms. magazine, Richards says, she previously attended many movement meetings where she was the only person in her 20s.

When younger activists are present, Richards says, it's often as tokens. "Frequently, what you'll get is older women sitting across the table from young people and asking, 'How can we reach out to youth?'" Then, "the attitude is like, 'That's a very nice suggestion. Now go get my coffee.'"

Some membership numbers from pro-choice group Planned Parenthood and from the major player on the pro-life side, the National Right to Life Committee, also suggest a subtle generational shift in the abortion debate. Jim Minow, vice president for development for Planned Parenthood, says the group's membership has grown impressively over the past five years, from 235,000 to 400,000.

Perhaps less reassuring, however, is that the group's median age has increased over time as well -- from the mid- to late 40s to the early 50s. Although Planned Parenthood has sponsored concerts by rock acts like Ani DiFranco and Barenaked Ladies, and has run a series of magazine ads featuring singers Mary J. Blige and Joan Osborne and actress Julia Stiles, the organization devotes just 5 percent of its resources specifically to youth outreach. As is true for many charitable organizations, Minow says, "the age [of members] has been inching upward."

But not all of them. The National Right to Life Committee's development office reports that the average age of its members dropped from 50 to 47 between 1987 and 1997, and has slipped to about 45 in the ensuing years. The NRLC says its membership now stands at about 500,000. NOW says it doesn't keep age data on its members and NARAL did not respond to repeated requests for information on its membership.

While NOW has no division devoted to youth outreach, it does occasionally sponsor conferences for young feminists. "We hold them every three years or so, as the need arises," says Kim Gandy, an executive vice president with the organization.

The need arises when there's a crisis. During previous Republican administrations in the late 1980s and early 1990s, when Roe vs. Wade was in active danger, NOW organized massive marches for abortion rights. When Bill Clinton became president and Roe vs. Wade seemed less threatened, NOW devoted more of its energies to other issues. Gandy insists NOW cannot be a single-issue group and doesn't give reproductive rights any more or less attention than the other causes it advocates. "We're just as concerned with rights for people of color and lesbian rights," Gandy said. "We don't rank oppression."

Major groups that oppose abortion rank youth recruitment as a high priority, and tend to start spreading their message to a younger audience than abortion rights groups pitch to. The NRLC sponsors programs like National Teens for Life and National College Students for Life, and youth workshops are part of the group's annual conventions. The American Life League, a group that claims to represent 360,000 families and opposes all abortions and even some forms of contraception, has an annual budget of more than $6 million and devotes roughly a third of its resources to youth outreach. Two of its seven divisions focus on young people: Rock for Life helps young pro-life activists spread their message through music, and Why Life? sends representatives to speak to school-age kids about the pro-life perspective.

Elizabeth Daub, 25, travels as a youth educator for Why Life? and writes for Reality Check, the ALL's youth newsletter. According to Daub, teens are fed a steady message of sexual permissiveness and perversion through MTV and other parts of the entertainment industry. What's more, Daub accuses Planned Parenthood and other abortion rights organizations of encouraging this message by making contraceptives available to teens, and then providing abortion services when the birth control methods fail.

"Young people are being totally taken advantage of," Daub says. "They don't understand what the abortion industry is trying to do to them."

Encourging young adults to be suspicious of the media, and wary of any industry that might be trying to make a profit off them, is a classic rebel yell, and is reminiscent of what any young leftist might expect from the protesters at rallies demonstrating against policies of the World Bank or World Trade Organization. The Gen X abortion opponent is borrowing a time-honored appeal to American youth -- the radical pose. Here, chastity is not an ideological step backward but a radical reaction against the Establishment -- and, say some in the movement, a step toward women's empowerment: "I personally saw how the abortion industry stripped women of their dignity," says Brandi Swindell, 24, director of Generation Life. Women's "spirits are much too strong to be broken or manipulated or brainwashed."

Young people who support Roe vs. Wade, admits Heidi Melz, campus outreach director for Planned Parenthood, have become harder to categorize on other abortion rights issues. "For example, our polling shows that people 18 to 30 feel strongly that contraceptives should be paid for by health insurance," Melz says, "but they are also very supportive of parental notification laws."

Melz concedes that there are legitimate differences of opinion on parental notification, but asserts that young people need to be better educated that restrictions on abortion access like parental notification, bans on partial-birth abortion and waiting periods are ultimately aimed at eliminating abortion altogether. "They have to understand that those things are a strategy by anti-choice people to overturn Roe vs. Wade," Melz says.