The return of "Survivor"

Back to the outback! Toned bodies, icky bugs and a landscape littered with kangaroos. Can the sequel measure up to the original? 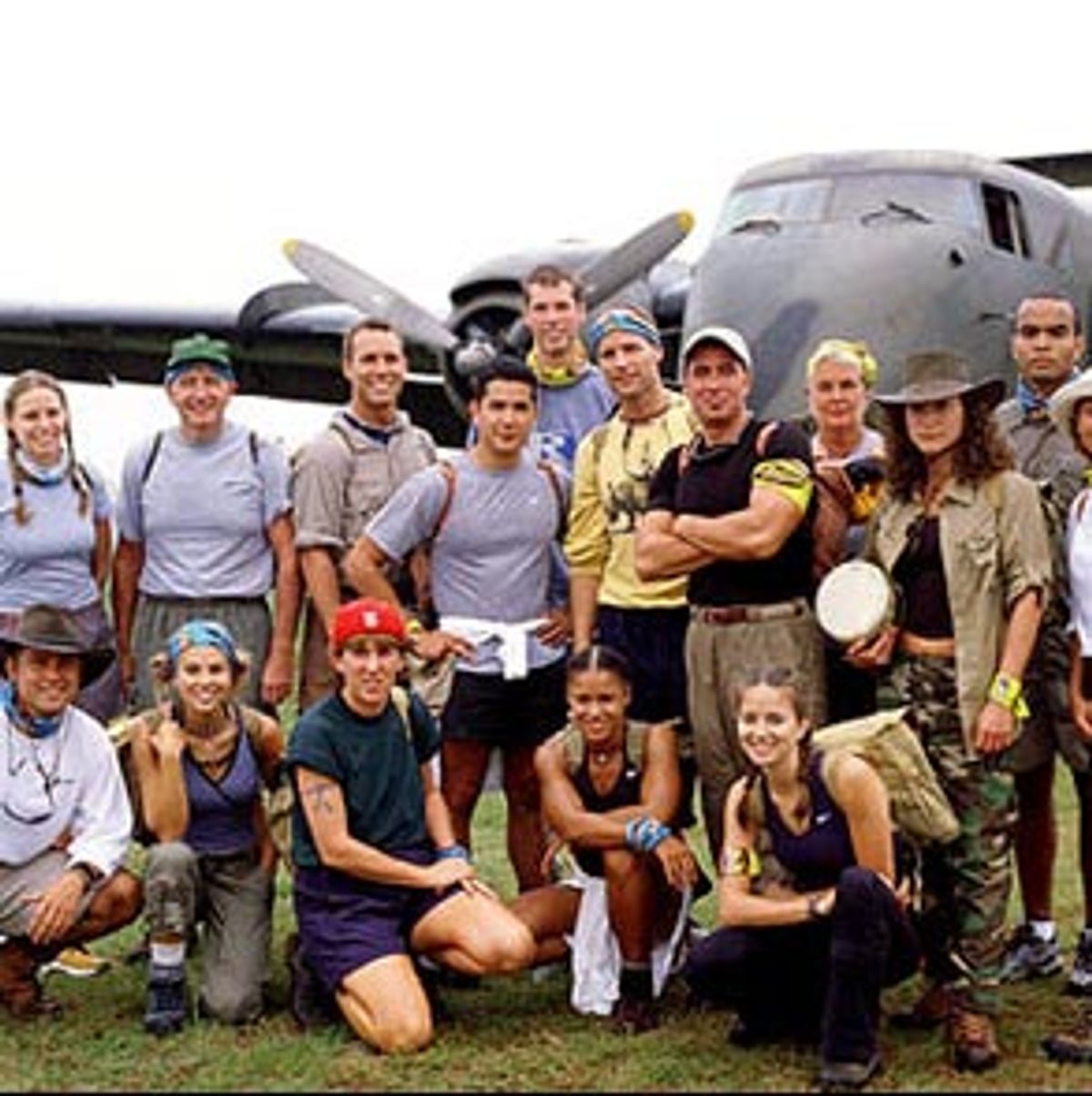 Who let the dingoes out? After just one episode of CBS's "Survivor: The Australian Outback," it's clear that these 16 new tribespeople are a dog-eat-dog bunch. Sunday's post-Super Bowl premiere felt more like a middle episode from the first "Survivor" series, with full-throttle back-stabbing, bitching and strategizing. By the time this sequel winds down, it could make the original look like an Amish barn raising.

Let's meet the tribes, shall we? On the blue Kucha (according to the show, that means "kangaroo" in an aboriginal language), we have Debb Eaton, 45, a prison guard from New Hampshire; Rodger Bingham, 52, a carpentry teacher/farmer from Kentucky; Kimmi Kappenberg, 28, a bartender from New York; Nick Brown, 23, a Harvard Law student from San Francisco; Alicia Calaway, 32, a personal trainer from New York; Michael Skupin, 38, a software publisher and family guy from Michigan; Jeff Varner, 34, an Internet project manager from New York; and Elisabeth Filarski, 23, a shoe designer from Boston.

For the green Ogakor ("crocodile"), it's Keith Famie, 40, a chef from Michigan; Amber Brkich, 22, an administrative assistant from Pennsylvania; Jerri Manthey, 30, an aspiring actress from Los Angeles; Colby Donaldson, 26, an auto customizer from Dallas; Maralyn Hershey, 51, a retired cop from Virginia; Mitchell Olson, 23, a singer-songwriter from South Dakota; Kel Gleason, 33, an Army intelligence officer from Fort Hood, Texas; and Tina Wesson, 40, a nurse/mom from Tennessee.

If you were hooked on the first series, you'll be glad to know that creator Mark Burnett and his staff have not tampered with their formula of evocative nature visuals (oh, come on, who doesn't love kangaroos and koalas?), shrewd editing and savvy casting -- when you see the tribal dynamics start to kick in, you realize that these contestants, as pretty as many of them are, were chosen as much (maybe more) for personality type as for looks.

The chanting theme song remains -- now marked with a buzzing, ominous digeridoo. Blazing torches still symbolize life. Jeff Probst (Aborigine for "great white stiff") still wears his Somber Face when he summons the losers to tribal council. But, you have to admit, after the animatronic Julie Chen on "Big Brother" and the pointless Anderson Cooper on "The Mole," Probst is starting to look like frickin' Walter Cronkite.

Whether or not "Survivor: The Australian Outback" can duplicate its ratings glory of last summer, it's still a smartly turned-out piece of reality-entertainment cheese. Or maybe it just seems that way, now that we've seen its freakish offspring: "Big Brother," "The Mole" and "Temptation Island."

At the very least, after watching it, you don't feel the need to be scrubbed down with bleach like Meryl Streep in "Silkwood."

But the biggest difference between "Survivor" and every other reality show is that it lives up to its billing. Did you see Debb from Kucha and Keith from Ogakor laboring intensely and without success to make fire in the premiere? Without fire, you don't eat and you're cold at night. "Survivor" is a show about survival (doh!), which may seem like a no-brainer until you watch the contestants on "The Mole" engaged in a life-or-death struggle to do laundry.

Don't get me wrong, though -- "Survivor" is not above tolerating a little treachery (well, a lot of treachery) to make things interesting for us in a love it/hate it way. The Kuchas and Ogakors on "Survivor 2" obviously studied the book of Richard Hatch ("How to Make No Friends and Win a Million Bucks") backward and forward.

But here's something to ponder: Has the socioeconomic climate changed just enough to color our response to their antics? The dead-on office politics of the first series were harrowing enough in robust times, but, hey, that's how the economy got robust, wasn't it? In the current downturn, will the show's Darwinian premise just bum people out? Will viewers opt instead for the sitcom escapism of NBC's competing supersize episodes of "Friends"?

Sunday's episode of "Survivor 2" (it moves to Thursdays at 8 p.m. EST this week) begins with the contestants being flown into the middle of the outback on a cargo plane. Last year's edition was at least 15 minutes old before we saw Ramona throwing up off a raft; this one gives us barf shots exactly 10 seconds into the program.

The group is dumped on the ground and the plane takes off. The tribes then have five minutes to salvage whatever supplies they can before embarking on a five-mile hike, maps in hand, to find their camps.

The outback, for the record, is a general name for the 2 million square miles of the Australian interior, ranging from desert to mountains to jungle. The "Survivor" producers have put the contestants in a rough but diverse area with everything from brush to spectacular canyons.

The two groups eventually find their streamside campsites. The alpha males and females -- notably Keith from Ogakor and Debb from Kucha -- get bossy immediately, leading to the inevitable on-camera whining from their teammates. Kimmi -- think motormouthed Jenna with a Noo Yawk accent -- takes an instant dislike to Debb. ("She makes me crazy.") Jerri tells the camera that she resents Keith's "condescending remarks" to her. (Another B.B.-Stacey smackdown looms!)

Michael is an intensely hateable, smug, "I actually hunt and camp, so I know what I'm doing" suburban warrior. He tries to elbow Debb and Rodger out of the way and take over the building of the shelter. Rodger's a carpenter and might be expected to be the point man in that particular endeavor, but Michael presses ahead. This openly pisses off Debb, and might piss off Rodger too, but he's a Bible-toting gentleman and simply turns the other cheek. Or maybe he's quietly praying for the Lord to smite Michael dead with a wayward boomerang.

On the undercard, it's Alicia, the quiet, musclebound personal trainer, vs. hunky Harvard boy Nick, who looks like a Terry McMillan fantasy. Alicia disses Nick to his face because he can't read the compass on the hike to camp and gets the group lost. You can practically see the thought bubble over Nick's head: "Ooh, she wants me!"

Watching the first "Survivor 2" episode, it was hard not to match up new contestants to their "Survivor" archetypes. Jeff, who's seen barfing on camera on land as well, complains, "I felt really weak and on the verge of throwing up ever since the plane ride." Has he learned nothing from the tragic example of Ramona, one of the early ejectees in the first series?

Maralyn is a tough old broad straight out of central casting who's billed as "Mad Dog" in the promos; she looks and talks suspiciously like Rudy in drag. Rodger, the oldest contestant, gets his foot caught in the mooring of a raft during the immunity challenge (a team race that entails carrying a lighted torch over water via perilous footbridge and raft), and his Kucha team loses; those of us who remember Sonja's similar gaffe during the first "Survivor" were thinking, "Uh-oh, the old guy's toast."

And Rodger's smarmy Kucha tribemate Michael had the same thing on his mind, except in a more literal sense, when he revealed his "Soylent Green" theory to the camera -- Rodger, "and not just him, anybody over 50," is a liability in swimming and climbing challenges. (Please, let Rudy have five minutes in a locked room with this creep.) But then, the surprising first expulsion turned our assumptions around.

Before the Kuchas have to trudge off to tribal council, we see Debb trying to start an alliance, telling Rodger and others to vote for Jeff because he was sick and weak and wouldn't mind leaving. When Alicia, the buff personal trainer, tells Jeff -- who's trying to start a little alliance of his own -- about Debb's plotting, the cloud of nausea seems to lift from his face and he starts breathing fire.

"People have got to go, and I look forward to walking up and writing their name on a card and talking about them!" he tells the camera.

When the tribe has spoken (yeah, Probst is sticking with his money line), Debb is the victim -- booted off by a vote of 7-1! (Only she voted for Jeff.) In her postmortem in the confessional, the stunned Debb gasps, "I always thought it boiled down to mental toughness and ability, and none of that mattered!"

Right you are, mate. "Survivor: The Australian Outback" is going to be a very different game from the first one, where the tribes went after the old, the prissy and the frail first, until Rich's alliance took hold. No, these new contestants are playing the Hatch card right out of the gate, immediately identifying and eliminating those who are perceived to be strong threats.

Debb's sin was that she made a clumsy attempt to form an alliance too early and didn't temper her bossiness with a veneer of charm. The ones who have the best chance of winning this time around are the ones who play it more subtly, who hang back, blend in and smile. Which, oddly enough, could ultimately mean that the nice guy (or girl) will finish first. Something tells me that the snake won't be eating the rat when this is over; the snakes will long since have devoured one another. And the cuddly koala might come out on top.