The Htoo twins come in from the cold 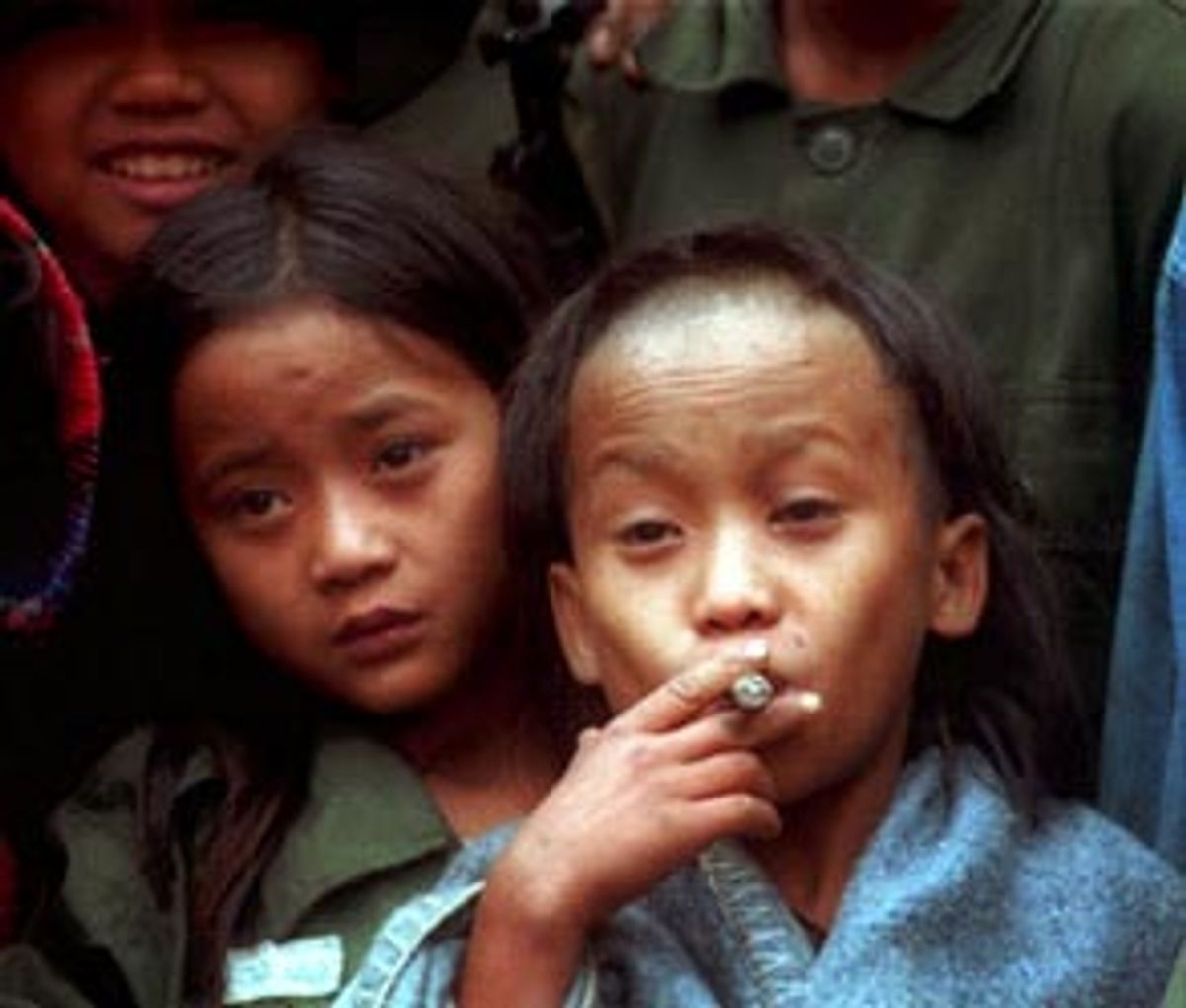 The image itself (splayed across virtually every newspaper in the world) was uncanny, the caption more unsettling yet: Dec. 6, 1999, a pair of 12-year-old ethnic Karen twin brothers, the Htoos, Johnny on the left (that's a boy?) and Luther (Luther!?) on the right, leaders of a beleaguered Myanmar insurgent group known as God's Army, whose members credit them with mystical godlike powers that "render them invulnerable during battle."

In the photo, they look like Renaissance cherubs gone badly wrong (specifically like those two clichéd angels propped at the foot of Raphael's Dresden Sistine Madonna): toxic putti. Raphael's cherubs, that is, gone upriver, deep, way too deep into Conradland -- miniature Brandos bestriding their own demented cargo cult. Their aura is all the more unsettling in that, in this photo anyway, they actually look, if you'll pardon the expression, like Siamese twins. Johnny seems to grow right out of Luther's back, his tremulous innocence hitched helplessly to the latter's age-old, gimlet-eyed world-weariness: seen it all (toke), seen it all (toke), should never have seen any of it.

The inhaled stogie lends the image a certain sulfurous air, as does word that their followers have now gone and attacked a hospital, of all things, and are holding hundreds of hostages. Is there no bottom to the world's demented evil?

Of course, this is all so much Orientalist claptrap: feverish white Western fantasies about the metaphysical debauch of endlessly inscrutable colored folk, the convenient Other. In fact, the attack on the hospital itself undercuts such smug and easy projections: They've raided the hospital and are holding all those hostages to advance their demands that the Thai army stop shelling their positions and that the doctors there treat their own ragtag wounded. There is no Primordial Evil here, only all-too-human desperation.

But the fantasy of the first allows us to screen out the palpable reality of the second -- no need any longer to trouble ourselves over the plight of Karen minorities wedged in a tightening vise between those Burmese and Thai generals. No call to keep paying attention.

And so we don't (pay attention). Time passes, and then suddenly, last week, here they are again, those wacky Htoo boys, come in out of the cold (or rather the jungle dank). After turning themselves in to Thai border guards alongside a clutch of their followers, they are whisked to a police compound in the nearby town of Suan Phung, where (according to the dispatch by Time's Robert Horn) they soon find themselves exchanging bewildered stares with the Thai prime minister and several of his top generals. The prime minister "gently stroked the boys' lice ridden locks. 'He totally demystified them,' says Sunai Phasuk of Forum Asia, a human rights group. In Thailand, where people still crawl before royalty, 'you don't pat a god on the head.'"

So that, see (another comforting dodge, an obverse reassuring fantasy): They're just ordinary kids after all. Decked out there in their fresh soccer frocks, straddling nothing more fearsome than everyday puberty, they're just like the boys next door (though it would be nice if somebody could get that Luther kid to stop smoking).

This too, of course, is all wrong. Thirteen years old, they look like they can't be more than 7 or 8. And that's not charming mumbo jumbo, that's severe extended malnutrition. These aren't just ordinary kids. They've seen things, they've lived through hells that the world (which is to say the rest of us, swaddled in our comforting illusions) had no business allowing.