Bringing faith to the West Wing 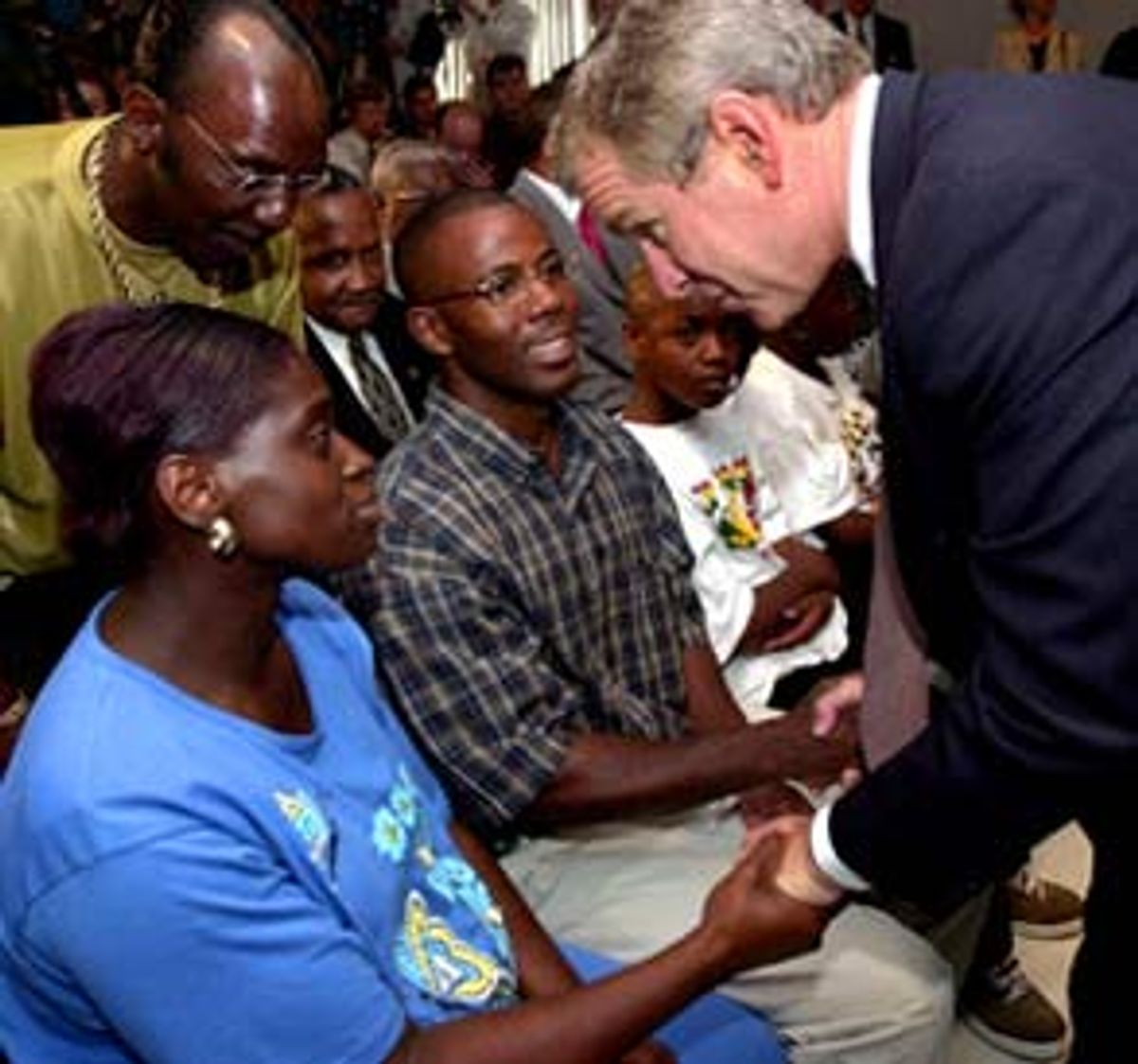 Back in the mid-1990s, John DiIulio, an ambitious Princeton political scientist and scholar of prison management and crime, made a stir with what turned out to be one of the most disastrously wrong predictions in the annals of public intellectuals. Relying upon reams of supposedly irrefutable data, DiIulio predicted a massive coming wave of crime by children and teenagers -- crime of unprecedented brutality. Situating this prediction in the erosion of family and faith, DiIulio warned of a "generational wolf pack" of "fatherless, Godless and jobless" teens wreaking havoc on the American landscape. "Superpredators," he called them.

Now John DiIulio -- his academic chair shifted from Princeton to Penn -- is back, in a public-policy role at least as controversial: He is director, and the intellectual guiding force, behind the Bush administration's new White House Office of Faith-Based and Community Initiatives. His job, as he put it on CBS's "The Early Show" this week, is to cultivate "a little government friendliness" toward social-service programs based in communities of worship.

I have my own minor history with DiIulio. Back in 1995 I wrote a long article critical of his "wolf pack" theory and his analysis of crime; DiIulio responded with a furious letter to the editor, denouncing me as anti-Italian because I compared his theories to the views of a liberal police chief who also happened to be of Italian-American extraction. Then a few months later I met DiIulio at a public-policy forum in which he talked about finding common ground between liberals and conservatives on crime -- a stance that startled me given his inflammatory rhetoric up to that point. Afterward I introduced myself, expecting the usual sardonic dance between a journalist and aggrieved subject. Instead he smiled warmly: "God bless you," DiIulio said, and it was without a trace of sarcasm.

I've watched DiIulio's evolution -- that search for common ground -- with interest. By the end of the 1990s, he was disillusioned by the national punishment regime he had helped inspire, arguing in the Wall Street Journal and scholarly publications for investment in community-based youth programs instead of more prison cells. His conservatism turned away from penology and instead into research promoting the success of social service outreach by African-American churches. Last year he edited a book on religion in American life with the decidedly liberal Washington Post columnist E.J. Dionne.

DiIulio's new White House appointment prompts an interesting question: Are his new policy prescriptions -- for broader government partnership in social services by churches, synagogues and mosques -- any better founded or any more reliable than his wolf-pack predictions? What the new DiIulio calls "a little government friendliness" toward religious charities has civil libertarians -- and some religious denominations -- alarmed about breaches in the church-state wall. DiIulio says the plan is designed to "level the playing field" between sacred and secular; Laura Murphy, the ACLU's Washington office director, calls the new plan "a faith-based prescription for discrimination." The Rev. Barry Lynn, executive director of Americans United for Separation of Church and State, warns that the Bush-DiIulio plan threatens to create "a giant, new kind of conglomerate bureaucracy of church and state sitting in the White House."

I'm a die-hard civil libertarian. But I've also lived and reported in inner cities for the last two decades and find the question more vexed -- and vexing -- than either DiIulio's reassuring rhetoric or the ACLU's abstract invocation of principle.

It's a simple fact, for instance, that in New Haven, Conn., the city where I live and the seventh-poorest municipality in the United States, religiously affiliated outfits are the social-service providers of last resort, keeping their feet firmly planted in the asphalt during the years that government -- thanks to Republican presidents and Congresses -- cut back and left the poor to fend for themselves. Jewish Family Services provides post-traumatic counseling to kids who've witnessed violence. My stepdaughter's Catholic church runs a soup kitchen. Low-income housing construction, prisoner re-entry, after-school mentoring: Religious communities are doing as much as anyone to sustain a safety net. And many of them are already getting government money to do so. I've seen no convincing evidence that religious agencies do their job better than their secular counterparts; but I've seen plenty of evidence that they often do their job alone.

But if my experience here in New Haven makes me appreciate the work of religious charities and activists, it's no less revealing of a very specific reason to find the Bush plan worrisome. Back in the 1980s, when I was a reporter and editor at local newspapers, this city's chairman of the board of education was an influential minister. Mysteriously, a disproportionate number of jobs in the school system -- from cafeteria to principal's office -- went to his congregants. And when that minister decided to back a mayoral candidate, so did those people whose jobs he'd arranged. Another minister a few years back got millions in city grants to build low-income housing. He did the worst job of any nonprofit housing developer in the city's history, but somehow the grants kept coming -- and somehow the minister's church buses kept showing up to support the mayor on election day.

Both of these scandals, as it happens, involved Democrats. But they are a minor-league preview of the scandals the Bush religious-aid package threatens to unleash. Which churches and which denominations are rewarded with funds that fit their profile is a profoundly political matter.

DiIulio goes to great lengths to describe the new White House office as an equal-opportunity funder of religious and secular projects. "No one is talking about funding religion directly," he said on CBS. "If that were the proposal, I wouldn't support it. We're not talking about giving government money to religious groups. We're talking about making it possible for groups that are out there performing valued social services to compete, whether they're faith-based or secular community-rooted nonprofits, on the same basis as any other nongovernmental providers of those services."

But in fact, what Bush and DiIulio plan is a new funding stream specifically tailored to fit the profile of religious charities: a multibillion-dollar fund specifically going to small charities like those run by churches; seed money to existing groups venturing into social services for the first time. It's clear that those groups mean churches, not bowling leagues.

This funding stream may pay for some good programs. But it will also create a massive expansion of the base of GOP political influence. What City Hall jobs were to urban Democrats in an earlier era, church-based charities will be to the GOP. Governors (2-to-1 Republicans these days) will see to it that block grants flow to congregations whose church buses show up at the polls on Election Day. Favored denominations will be rewarded with programs crafted to fit their profile.

Mark my words: the greatest impact of the White House's faith-based outreach will be to lay the groundwork for a national GOP patronage machine to rival the old days of Richard Daley and Boss Tweed.

At the same time, it's also alarming that the very same religious lobbies that want to breach the church-state wall when it comes to funding, want impermeable First Amendment protection from public accountability. In both George W. Bush's Texas and John Ashcroft's Missouri, churches claim the First Amendment right to run their religious schools, daycare centers and drug programs free from licensing and performance standards applied to all other agencies in the education or social-service arena. Because of the First Amendment, they claim they can discriminate in hiring against gays or women or anyone else routinely protected at secular agencies.

Again, it's a question of patronage as much as principle: Can we really expect the Bush White House, already bending over backward to grant the religious right every symbolic victory, to hold the line against special rights for religious charities?

When John DiIulio first started shifting his rhetoric from the wolf pack to black churches, I found myself responding with some cynicism: He's shrewdly recognized the end of the crime panic, I thought, and is changing the subject, advancing his career in a new direction.

I don't think that anymore. Having read DiIulio's recent op-eds and articles, I'm convinced that his affection for church-based charities is genuine and often well-founded -- especially when it comes to dealing with prisoners and their families, two groups to whom churches both black and white have shown notable dedication.

But still. The last time John DiIulio rose to national prominence, he helped inspire a national wave of prison-building he later claimed not to want. The damage done by DiIulio's superpredator rhetoric in the 1990s wasn't really caused by his bad data, or because it turned out to be a false prophecy. The damage came because DiIulio -- judging from his subsequent regret -- failed to see the cynical political uses to which his research, his heartfelt alarm at social decay, would be put. The same, I fear, is true of his new elevation to the White House. DiIulio wants to promote good works. Instead, he's been hired as chief engineer for a patronage machine.