Can two men make a baby?

Researchers say it's possible, but lawmakers must pave the way. 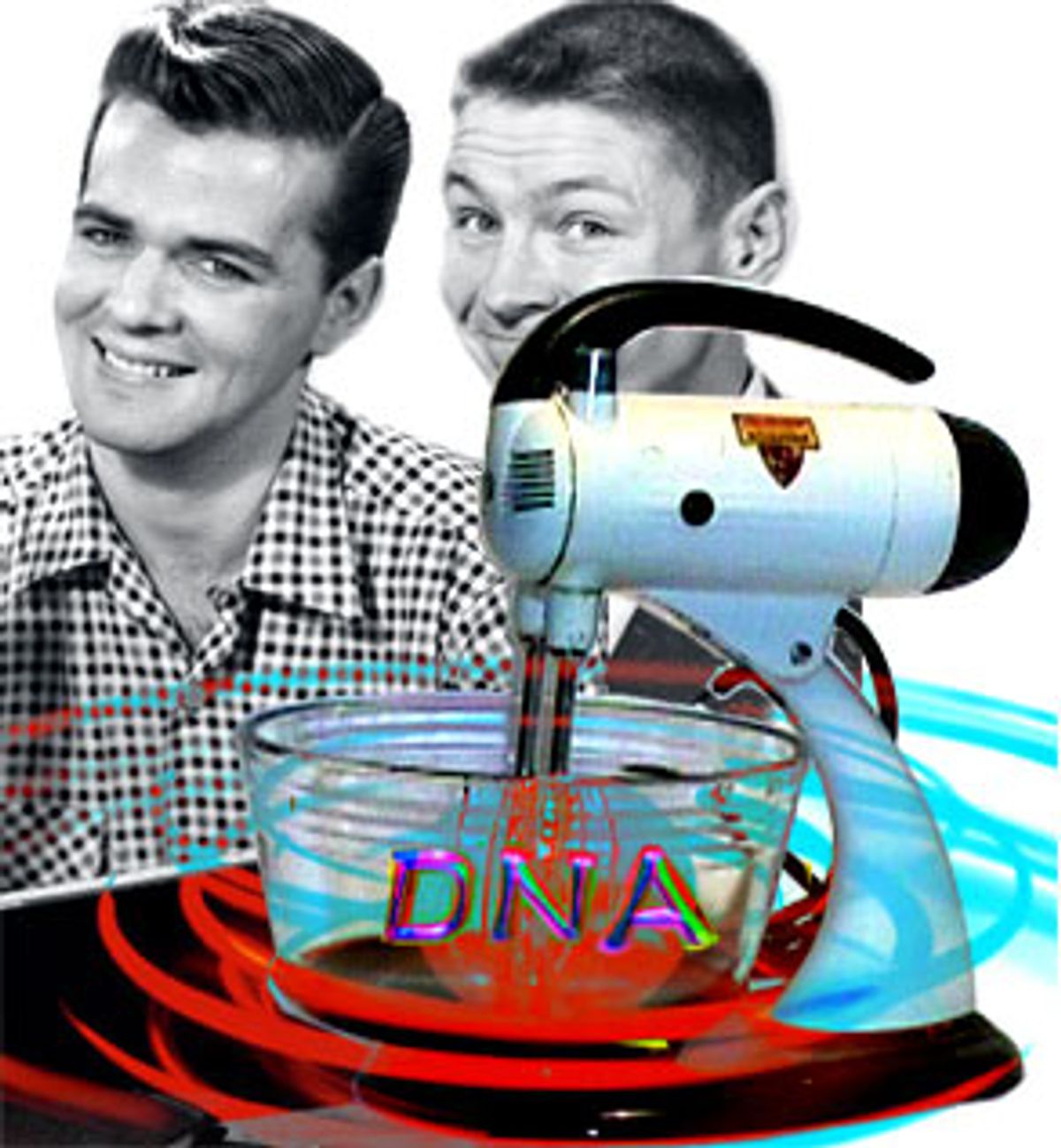 It has been close to four years since the replication of Dolly the sheep -- not a very long time considering the lumbering progress of science. Still, cloning now seems like an old, tired subject that pops up periodically in the media, a run-of-the-mill hot-button topic that has become a part of the American glossary of debatable issues, like gay rights or abortion.

Not coincidentally, each of these issues is inherently tied to the other: All involve life choices that revolve around sex, our national obsession. Of course, humanity's preoccupation with sex is just a cloak for its true obsession with reproduction or, more precisely, immortality.

Most evolutionary biologists will tell you that all organisms are obsessed with reproduction and passing on DNA; yet I doubt the road to procreation for other sentient beings that may exist in the universe, regardless of their sophistication or culture, is as littered with condoms, sex toys, birth control pills, test tubes, child support payments and abortion clinics as our own.

For humans today, the rites of reproduction, not to mention the rights to reproduction, are more complex and more contentious than ever. But for the most part, creating a child still requires a woman and a man or, to be more specific, the DNA of an egg and the DNA of a sperm.

Yet when Dolly was cloned a link emerged between cloning and reproduction, and predictably, a controversy ensued. On the edges of it were people like Richard Seed, a physicist who wanted to establish a cloning clinic to provide babies for infertile couples. And then there were the Raelians, a cultish religious group in Canada dedicated to the belief that extraterrestrial scientists seeded this planet by way of cloning. (They have recently announced plans to clone a deceased child.)

Meanwhile, Randolfe Wicker, an unofficial spokesman for human cloning who founded the Clone Rights United Front, mixes science and gay rights activism. Currently the director of the Human Cloning Foundation, Wicker argues for human cloning as a means to copy himself in the name of reproduction and feels strongly that cloning should be used by any and all persons who wish to do the same. Clearly, with Dolly, the path to immortality has forked, creating options in reproduction that go beyond or around the "man and wife" route and focus on mixing DNA.

A plausible reproductive option that involves the manipulation of DNA is a laboratory technique called egg nuclear transfer. It has been suggested that this method of manipulating the DNA of human eggs now be applied to infertility cases in which the mitochondria (essential structures found in every human cell) of a woman's eggs are damaged. Egg nuclear transfer, when used for infertility, would entail removing the DNA of the impaired egg and placing it into an enucleated egg -- an egg that has been cleaned of its own DNA and contains healthy mitochondria.

Because it involves human cloning, egg nuclear transfer, and any further research that encompasses it, are illegal under the current laws of many countries. But legislation that would allow nuclear transfer research for infertility treatment was voted into law by the British Parliament late last month, igniting a debate about how use of the technique might be expanded to include controversial applications.

Dr. Calum MacKellar, a bioethicist associated with the University of Edinburgh, has been outspoken about egg nuclear transfer, expressing a concern that it could be used to "mate" the genetic material from two sperm cells to create a biological child from two men. Theoretically, the technique could be used to introduce sperm DNA into an enucleated egg, fertilize this "male egg" with another sperm and gestate the resulting embryo in a surrogate mother. (Of course, this could be done with the DNA of two female eggs as well.)

As simple as it might sound, this scenario is still somewhat remote, since the creation and fertilization of a male egg would require researchers to overcome certain biological obstacles, not just legislative and psychological ones. One such impediment would be the automatic response that mammalian gametic DNA seems to exhibit in which it recognizes the DNA of the opposite sex, otherwise known as imprinting. Nevertheless, MacKellar is concerned that loopholes in the British legislation allow research that could bring about the male egg. In the draft of a recent article, he asks rhetorically: "Would society accept such motherless children?"

"That's creepy" was the response of a gay friend of mine when I told him of the idea for male eggs. But he went on to say that he's not against it, since he supports any and all varieties of reproductive freedom. Would he use it himself? "Perhaps, if it weren't prohibitively costly." Nevertheless, he's not overly enthusiastic about the concept, as in, "I don't feel liberated by it." Probably because he's not determined to have children of his own genetic makeup and views adoption or surrogacy as perfectly suitable alternatives.

Felicia Park-Rogers, director of Children of Lesbians and Gays Everywhere in San Francisco, agrees with my gay friend. She acknowledges the human desire for a child of one's own flesh and blood and advocates "as many ethical options as possible" to create a family. Though she is resolutely opposed to human cloning for reproduction -- which she views as an act of pure narcissism -- the bearing of children by way of egg nuclear transfer, she says, is "a perfectly ethical option" for gay and straight parents.

Since most humans react with knee-jerk revulsion to the words "cloning" and "reproduction" when used in close proximity, egg nuclear transfer for purposes of reproduction will be a hard sell. A gut-level aversion to cloning for reproduction may be somewhat instinctive, at least as far as evolution is concerned: Human cloning technology in the name of medical research is expected to remain outside the process of procreation; cloning as a mode of reproduction muscles into the natural order of the species.

Nevertheless, it is clear that much of the queasiness about human cloning for purposes of reproduction will be motivated by homophobia. Protests against male eggs will not just be about the issue of cloning but about homosexuality and the rights of gay men and women to have biological children.

It is hard to imagine many people being inimical to the newly mandated purpose of egg nuclear transfer, which is to give infertile couples a chance to start a family. But are we ready to view homosexual couples as clinically infertile? Will we define basic human reproductive rights as being available to everyone, regardless of sexual orientation?

During our correspondence, it became very clear that MacKellar is against the use of egg nuclear transfer by homosexual couples to create genetic offspring -- for "theological reasons." Park-Rogers, on the other hand, asserts that "any time we're looking at new ways to reproduce, we need to look at what's [ethically] best for families and children. So I would hate to see homophobic discrimination take part in blocking this in any way."

The scientific community spends millions of dollars on infertility research; couples spend millions on infertility treatment. Infertile couples everywhere have moral, ethical and legislative support as they struggle to have offspring. How would we justify the limitation of this expense and support to heterosexuals? Who deserves to have genetic offspring?

Those who have challenged the prerogative of infertile couples to have children often allude to concerns about overpopulation, the unnaturalness of reproduction via a laboratory setting or the great numbers of orphaned children available for adoption. But as MacKellar points out, most of us are driven to have offspring who look and act like us. Whether this is due to our quest for immortality or the hypothetical selfish genes (the idea that DNA has devised ways to perpetuate itself regardless of the organisms housing it), it is a drive that exists and cannot be denied.

Some may argue that a government -- any government -- does not have jurisdiction over a person's right to bear children and should not pass laws to govern a person's DNA. But like it or not, legislation will dictate which direction we end up taking in this matter. (Even as I write this, MacKellar notifies me that scientists have proposed another way in which men could make babies of their own -- by reprogramming cells from cloned embryos to change what was to become sperm to become an egg.)

Eventually, lawmakers will have to give in to the pressures of scientific progress, if not progressive thinking. Yet even if researchers are permitted to bring these technologies into reality, it could be four more years -- maybe fewer but most likely more -- until anyone, even heterosexual couples, would benefit from them. One hopes that, in that time, a principle of fairness will prevail and the law will be clear, so that use of reproductive technologies will center not on discriminatory doctrines but on the fundamental rights of freedom and choice.