Gillian Anderson's miraculously pregnant Dana Scully has brought "The X-Files" back to its eerie and disturbing best. 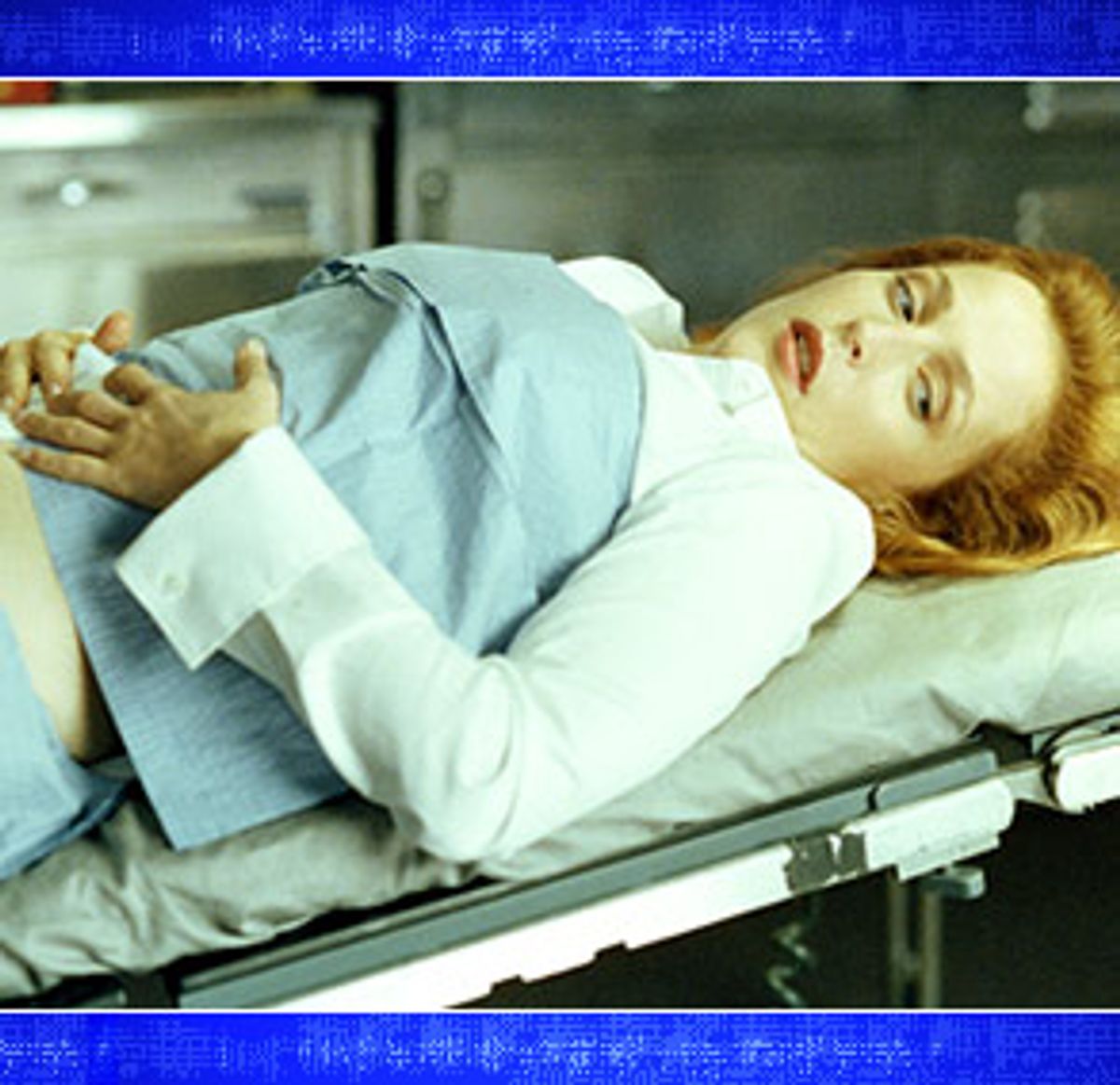 David Duchovny is returning to "The X-Files" for February sweeps, but who are we kidding? This is Gillian Anderson's show now. Oh sure, she has a new costar, Robert Patrick, but nobody's looking at him when she's on-screen. Anderson practically glows this season -- she has a sleeker hairdo, more flattering makeup and a cool new nipped-waist black duster coat that floats behind her as she strides purposefully into crime scenes.

But mostly what she has is confidence. More than ever, Anderson's Dana Scully commands your attention with her radiant gravity and stillness. She makes thinking look sexy.

The rejuvenated Anderson (she looked bored last year, but then so did Duchovny) is a big reason "The X-Files" is watchable again. But it's not the only reason. Ever since Duchovny's Mulder was taken aboard the mother ship in last season's finale, "The X-Files" has largely dispensed with the increasingly convoluted "mythology" and gone back to doing what it does best -- scaring the pants off smart viewers. Chris Carter and company have returned to making mini-horror movies of the week, and they're infinitely preferable to watching Mulder being poked and prodded by aliens.

The boogeymen this season seem to consciously hark back to the glory days of such accidents of birth as Flukeman the human worm and Eugene Tooms the immortal human-liver eater. This season has unveiled a bat-human; a crazy religious cult whose members worshiped a giant slug; a metal man; and, in the "sleep with the light on" Jan. 21 episode, a tiny, legless Indian fakir on a rolling cart with a squeaky wheel, who could crawl into people's body cavities to hitch a free ride. But wait -- aren't the writers just rehashing their greatest hits? Perhaps. But not when you look at this season from the perspective of Scully -- the pregnant Scully.

"The X-Files" has always been at its best when it's tapping into everyday phobias, societal paranoia (it did a mad cow disease story long before most of us knew what mad cow disease was) and, of course, subconscious anxieties and desires. And on a subconscious level, this season is playing out like every pregnant woman's worst nightmare.

Do I need to spell it out? How about the episode in which Scully was held captive by that crazy cult and ended up having her spine impregnated with the holy slug? When her partner, agent John Doggett (Patrick), rescued her, she ordered him to perform a kind of cesarean on her back while she screamed, "Cut it out of me now!" like a woman in labor. And in the fakir episode, Scully, in contrast to the tediously incredulous Doggett, seemed unfazed by the evidence that pointed to something having birthed its way out of the anal cavity of a dead businessman. What if it were something very small, she wondered aloud, "with small hands?"

Pointedly, this season has also had a recurring emphasis on endangered and abducted children, whom Scully must protect, and demons in the guise of children who mess with her head -- she can't destroy them until her paranormal-sniffing instincts shout down her maternal ones.

Oddly, though, the expectant Scully (who has yet to reveal her secret to Doggett) looks like she hasn't gained an ounce; TV Guide is already jeering the "forgotten" pregnancy story line. But Scully's pregnancy has not been forgotten; from a psychological angle, it dominates the show this season, down to the new floating-fetus image that begins the opening credit sequence.

Like Mary Shelley's "Frankenstein" (written to exorcise grief over a lost baby) and "Rosemary's Baby," "The X-Files" this season captures the dark side of pregnancy. The cases mirror Scully's feelings of being invaded and not being in control, her fear of complications and loss and her profound ambivalence over her impending motherhood. In addition to not looking pregnant, Scully never talks about her condition either, as if she's in denial. Anderson may not be lumbering around in a fat suit, but she does an exquisite job of conveying the anxiety and exhaustion of Scully not knowing for sure if what's inside her is angel or monster.

And Scully is absolutely alone in all of this, isolated without her confidant (and, maybe, the father of her baby) Mulder. At the end of the Jan. 21 episode, she broke down in front of Doggett, admitting how hard it is for her to think like Mulder (she hadn't spoken his name in weeks) in order to solve X-Files. She misses him.

In case you haven't been paying attention, Scully's pregnancy, which was revealed in last season's finale, took her, and the show's fans, by surprise. Hadn't it been well established that Scully was made "barren" by procedures done when she was abducted by aliens in the second season? It's possible that Mulder is the father (if she knows, she hasn't let on); there was an oblique scene in an episode last year where she was shown dressing in Mulder's apartment while he slept. But we don't know for sure if those two finally consummated their long platonic courtship.

Actually, it would be more plausible, in keeping with Scully's retiring and private nature, if her pregnancy turned out to be an immaculate conception. It would also be more in keeping with her rich psychological profile as a woman able to give religious faith, scientific rationality and the freaky unknown equal and careful consideration.

When "The X-Files" premiered in 1993, the contemplative Scully was supposed to be the show's skeptic. But her growing curiosity about the weird stuff she was witnessing, and her affection and respect for Mulder and his "I want to believe" credo, saved her from coming off as disdainful or closed-minded. And while Scully could take care of herself in tight situations, she was not about tough-girl bravado; instead, she radiated intelligence, empathy and a disarming, irresistible goodness. Scully was one of the most perfectly centered female TV characters in memory. Except, of course, when it came to sex.

As an overachieving woman in two male-dominated fields (she's a physician and an FBI agent), Scully has always tried to avoid looking vulnerable, because vulnerability is not a good career move. She keeps sex and romance, or indeed, any kind of life outside her job, at arm's length. And while she and Mulder have carried on a droll flirtation, their relationship bypasses -- transcends -- sex to achieve a more precious kind of intimacy. In a world where it's prudent to (all together now) "trust no one," Scully and Mulder have always had absolute trust in each other.

An interesting current of maternal longing has flowed through Scully's story lines for the past few seasons. In one story arc, she was assigned to protect a mysteriously ill little girl; forgetting her usual scrupulous professional detachment, Scully wanted to adopt the girl, convincing herself that she might be her alien-engineered daughter.

In another episode, she grew attached to Gibson Praise, a child prodigy hunted by the bad guys because he's a hybrid human-alien. Given all of this, it's tempting to read Scully's miracle pregnancy as an intense wish fulfillment. Is it all in her head? Has she willed a baby into being after years of putting career above all else?

And is Carter setting up some sort of Madonna destiny for Scully? It seems that way when you remember all those crashingly obvious scenes late last season of Mulder laid out in a crucifixion pose for brain surgery on Cancer Man's X-shaped operating table. There have been other possible clues, too -- Scully's unshakeable religious faith; her goddesslike serenity when faced with the losses of her father, her sister, her fertility, her health (a bout with cancer) and Mulder; and the strange, haunting scene from the "Clyde Bruckman's Final Repose" episode in 1995.

Scully does seem as if she's laboring under a new sense of bulletproof resignation this season. She doesn't let Doggett in emotionally, yet he keeps rescuing her. And she barely thanks him -- it's as if she knows he'll be there, knows that nothing is supposed to happen to her. After an initial wary tension between the newly open-minded Scully and the rigidly skeptical Doggett, whatever spark they had has flickered out. We don't really know anything about Doggett, except that his methods seem more suited to "NYPD Blue" than "The X-Files." But maybe we don't know him because Scully is uninterested in knowing him. And her lack of interest creates a tension of its own: Who is this guy, and why is he here?

Right now, Doggett exists for Scully only as an indefatigable workhorse and a bit of a by-the-book drag. He lets her go off down her paranormal avenues, but then he shows up in the nick of time, aided by some old-fashioned cop logic. Unflappable and, well, dogged, Doggett would make the perfect birth coach. (If indeed Carter is planning an all-"X-Files" nativity pageant, Doggett has the part of Joseph sewn up.)

Wherever "The X-Files" is headed, having Scully in the forefront these past few months has reemphasized a theme that has often been overshadowed by all the alien stuff. "The X-Files" was never merely about little green men. It's about our shared hunger to believe, whether that belief takes the shape of God, science, UFOs, Santa Claus, conspiracy theories, the stock market or cleverly constructed sci-fi TV series. Are Scully's openheartedness and gradual shedding of her need to explain the inexplicable the key to finding "the truth" that's out there? I don't know about you, but I'm starting to believe that "The X-Files" has been Scully's story, not Mulder's, all along.