Wim Wenders and buddies Bono, Rushdie and Schnabel botch a phony noir for the Artforum crowd. Only Mel Gibson escapes the fallout. 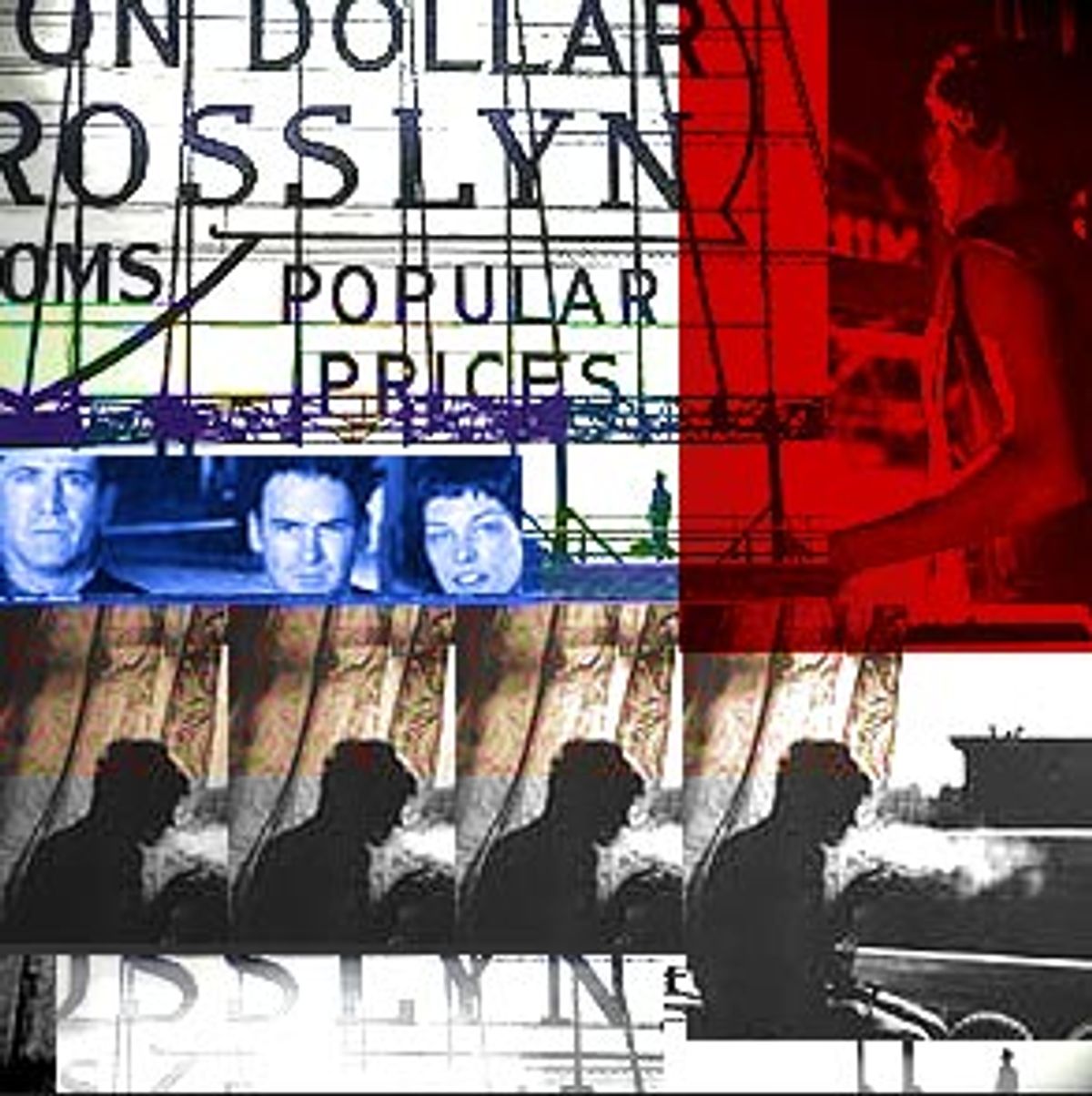 There's a vacancy in "The Million Dollar Hotel," and it's between Wim Wenders' ears. If I were choosing between what attempts to draw less attention to itself -- the amount of publicity Lions Gate Films is according the movie's release or a guy buying a skin mag at a newsstand -- Lions Gate would win. It seems to be hoping that no one will wonder why the picture has taken almost a year to reach America, and that it will close before anyone knows it has opened. You can hardly blame it.

Wenders' art noir is one of those pickles-and-ice-cream movies that leave you wondering what the people involved could possibly have been thinking. It desperately wants to be an American movie, a murder mystery-cum-doomed romance with a skid row Los Angeles setting and Mel Gibson as the dogged detective. Wenders loves the idea of American movies. You could tell that from his last movie, "The End of Violence," in which the Griffith Park Observatory scenes were clearly meant to echo "Rebel Without a Cause" and pulp director Samuel Fuller had a supporting role. In "The Million Dollar Hotel," when he shoots Milla Jovovich loitering in a nighttime alley while she smokes a cigarette and fog swirls around her, he's trying to conjure up the danger and romance of '40s noir. And the shots of bare hotel rooms with a single shaft of sunlight cutting through the dinginess or of street people huddled around diner counters in the wee hours continue the re-creation of the Edward Hopper canvases Wenders did in "The End of Violence."

But he doesn't understand the first thing about telling a story, about pacing or about reining in his actors. He's more interested in what might kindly be called "milieu" -- though his direction and sense of atmosphere are so flat that he seems to think that setting a tone is solely the job of the art director -- and in allowing members of the cast to out-oddball one another when it's their turn to swallow the camera.

The cast includes cult staples like Bud Cort and Richard Edson and cult staples in the making like Peter Stormare. It also includes Amanda Plummer, who is often reduced to being a cult figure by directors who have no idea how to use her freakish gifts. In some ways you can't blame these actors for overacting, since it's exactly what's required of them here. They, and others like Jimmy Smits and Gloria Stuart, are playing residents of a once-grand L.A. flophouse (actually the Frontier Hotel, built in 1917), and Wenders has encouraged them to come up with eccentricities that will tell us they're "special people." (A measure of how badly directed the actors are is that Smits, probably for the first time ever, seems completely inauthentic.) It's a little like the down-and-out rot of Charles Bukowski filtered through a kind of hippie sentimentality. They're all gentle, damaged souls adrift in the big city.

Wenders reserves the bulk of his starry-eyed approach for the lovers at the center of the movie, Jeremy Davies as the mentally handicapped Tom-Tom and Jovovich as Eloise, the object of his attention-deficit-disorder ardor. Tom-Tom is a kind of in-house errand boy, zipping through the lobby on his skateboard, delivering snacks and found "treasures" to the inhabitants. With unending layers of baggy T-shirts and trousers, his hair sticking out in Flock of Seagulls wings, Davies is the innocent caught in the investigation of his best friend Izzy's death. The header Izzy took off the roof appears to be a suicide, but his billionaire father (that king of heavy-spirited scenery chewers, Harris Yulin) is convinced it was murder and uses his influence to persuade Skinner (Gibson), an FBI detective, to investigate. Eloise, the faraway-so-close angel-girl who spends her days lost in the battered paperback she gets from a nearby used-book store, agrees to help Skinner get the skinny on Tom-Tom and gradually finds herself wanting to protect him.

The scenes between Davies and Jovovich are a competition to see who can come up with the most tics. Jovovich walks with her head down and her arms drawn protectively around her body, occasionally twirling her close-cropped hair. She's no match for Davies' out-and-out panoply of affectations. It's a ghastly display. He laughs out of context, bobs and weaves, jitters and jumps in place, sneaks around corridors pretending his finger is a gun like a kid playing cops and robbers, makes hand gestures related to sentences he's already finished and repeats words and phrases so that there's no difference between talking to himself and talking to other people. This is Wenders' idea of a romantic hero -- a mental case who can barely communicate?

After a while the combination of the adoration Wenders showers on Tom-Tom and Eloise and the movie's airless here-and-not-here dissociation makes it like watching "David and Lisa in Alphaville." The only genuine romance in the movie lies in a few stray shots of Jovovich (Phedon Papamichael's cinematography is frequently beautiful) sleeping in the sun or running across the hotel's roof in a ball gown. She's stunning to look at. But directors keep casting her as a vision and ignoring the crazy comic spark she showed as the intergalactic deity Leeloo in "The Fifth Element," and in a few scenes where she had the expressiveness of silent-film actors.

"The Million Dollar Hotel" plays less like a movie than a get-together for Wenders' buddies -- it's "Hey, Kids! Let's Make a Movie" for the Artforum crowd. The idea (notion? daydream? hallucination?) for the story is credited to U2 frontman Bono (who turns up in a cameo, just another of the cool down-and-outers). He also contributed to the score along with Brian Eno, Daniel Lanois and Jon Hassell. The lyrics to one of the songs are taken from Salman Rushdie's rock novel "The Ground Beneath Her Feet." (Oddly -- and stupidly -- the movie substitutes Jovovich's eccentric, overdramatized and spellbinding version of Lou Reed's "Satellite of Love," which appears on the soundtrack CD, for Bono's cooler-than-death version.)

Some of the paintings that are supposed to have been done by the dead Izzy were in fact done by Julian Schnabel. And Yoko Ono is among those thanked in the end credits (presumably for allowing Stormare's character, who claims he was the hidden member of the Beatles, to butcher several Lennon-McCartney tunes). It's as if the whole thing went from bull session (or interviews in which the filmmakers gassed on about the "concept") to production with none of the thinking things out usually involved in making a movie. Wenders is trying for something like the poeticization that Jean-Luc Godard had in his '60s reimaginings of American genre films. But he's like someone with an intellectual grasp of poetry and no instinctive feel for it.

The only escapee from this artfully distressed fruit basket is Gibson, who seems fully aware that he's caught in a stinker. Gibson is saddled with the movie's most ridiculous conceit: a full-body brace his character has been wearing since having a third arm removed from his back. But he works his ass off, using the character's physical stiffness and the Steve Canyon flattop he wears to turn himself into a cartoon. Gibson affects the deep, "I'm not fooling around here" voice of a straight-arrow G-man, and in every line reading you can hear him trying to put an ironic distance between himself and the ludicrousness of the proceedings. It's an actor's saving sanity, and it makes him look like the one guy at the party who hasn't been dipping into the quaaludes and laughing gas.