The battle over the attorney general results in friction and division -- within the Democratic Party. 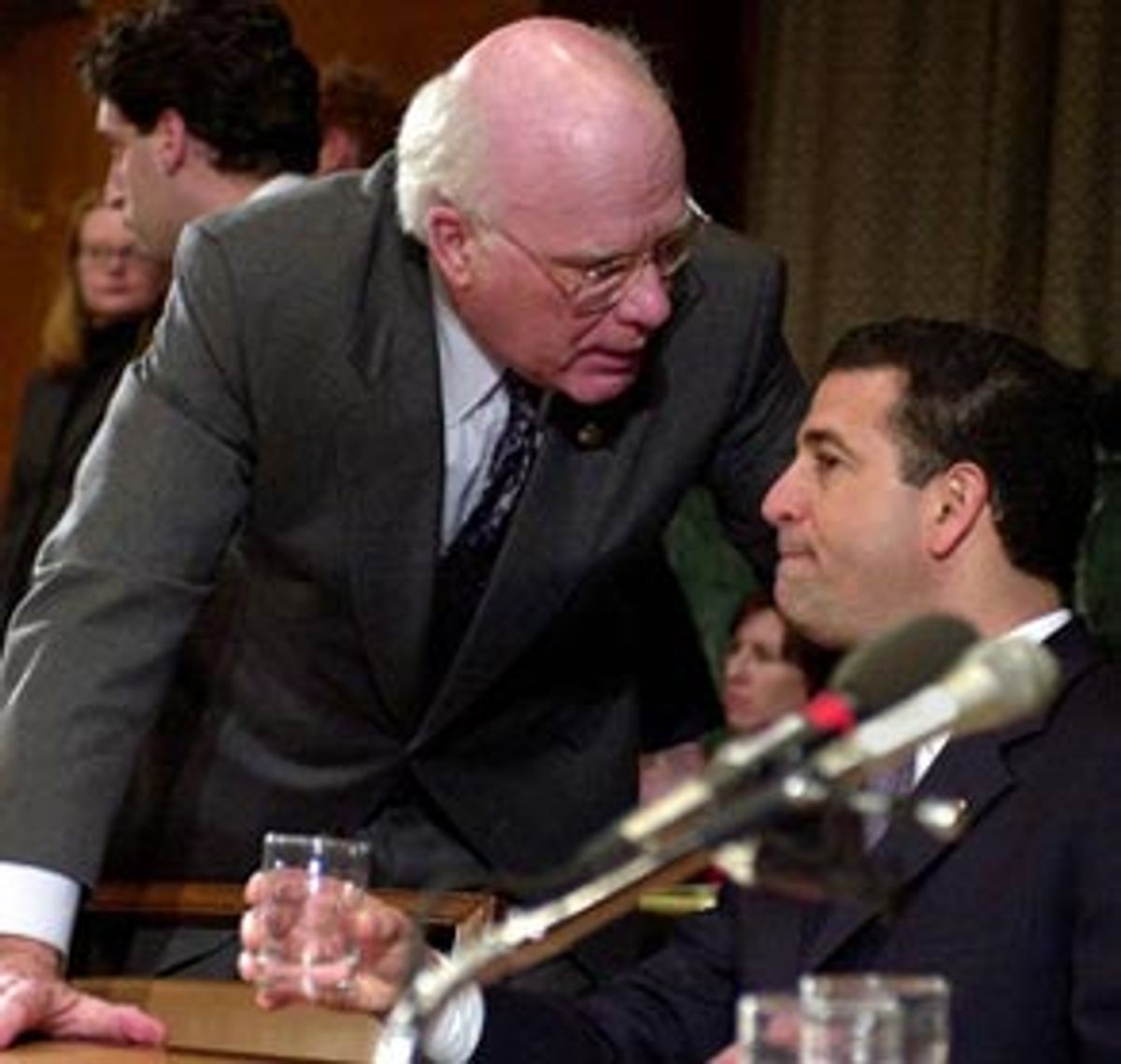 After all the protests that followed his nomination, the actual vote to confirm John Ashcroft as attorney general was a dramatic letdown, even though the final tally, 58-42, was closer than many on both sides had predicted. At 1:45 p.m. EST Thursday, when the vote was scheduled to take place on the Senate floor, fewer than half the senators were present. The latecomers straggled in one at a time, raised a hand to be recognized by the vote counter, gave a tiny sign -- a nod, a thumbs up/thumbs down or a frequently inaudible "yea" or "nay" -- and then milled about, chatting with their colleagues.

Senate Judiciary Committee chairman Orrin Hatch, R-Utah, cut out of the proceedings early to gloat about Ashcroft's victory to the press. Though he claimed at more than one point that he was gratified to have any support from Democrats, Hatch's demeanor told another story. When asked if he had feared a filibuster by Democrats, Hatch replied quickly, "They didn't have the guts."

They certainly didn't have their act together, and the Republicans did. From the beginning of the Ashcroft battle, the Democratic Senate coalition was doomed to the defeat it suffered by a shaky foundation of shifting priorities. The Democrats were torn between an ideological wing that violently opposed Ashcroft and a pragmatic wing that wanted to appear to be giving the Bush administration a fair start.

When then President-elect Bush chose Ashcroft for the top law enforcement spot on Dec. 22, a broad spectrum of left-leaning interest groups quickly coalesced to fight him. Among them were the gay rights group Human Rights Campaign, the Sierra Club, the anti-gun Million Moms March, the NAACP, the National Abortion and Reproductive Rights Action League and People for the American Way. According to these organizations, Ashcroft was wrong on every one of their ideological issues.

But what he wasn't was dirty. There was no hint of scandal in Ashcroft's record -- certainly not by the standards set by the Clinton administration or the incoming president. Vouching for Ashcroft's good character were two prominent Democratic senators -- Russ Feingold of Wisconsin and Robert Torricelli of New Jersey -- who managed to say positive things about him before someone told them that there was going to be a fight.

The selection of Ashcroft, a rather obvious nod to the Christian right, showed that Bush never accepted the Democrats' premise that his slender victory compelled him to pull together a compromise Cabinet. Instead, in this case, he made a traditional appointment, choosing someone beloved by an important constituency, his party's social conservatives, who had rescued Bush from the primary challenge of Sen. John McCain, stayed in the background at the scripted smilefest of the Republican Convention and held their tongues as Bush distanced himself from core conservative stands on abortion and gay rights during his debates with Al Gore.

Bush kept mum about most issues throughout the 36-day-long Election Night, and built his transition team on the shoulders of pragmatists and ideological agnostics like Colin Powell. Ashcroft was the clear peace offering.

No Republican ever voiced a peep against Ashcroft, and Senate Majority Leader Trent Lott, R-Miss., boasted that the GOP had 50 solid votes and would have a tie-breaking vote from Dick Cheney by Inauguration Day. Who cared what the Democrats did?

But Democrats did have their chance. Thanks to the fluke of an evenly split Senate and a lame-duck Democratic administration, they had two weeks' worth of majority rule in the Senate, and could have set the tone of the confirmation hearings. They had more than enough members to sustain a filibuster, and the army of Ashcroft opponents compiled enough of his career lowlights to supply rationalizations for those who wished to vote against him.

But then two crucial events tilted the balance irrevocably in Ashcroft's favor. First, Lott struck a historic compromise with Senate Democrats on Jan. 5, granting them a greater share of power than they were entitled to as the minority party. The agreement was reached over the objections of some of Lott's fellow Republicans, and Democratic leader Sen. Tom Daschle of South Dakota declared it a near miracle. "This is a classic case of extending the hand of friendship," Lott said. He also suggested that the friendly hand -- and the deal -- could be withdrawn if the Democrats didn't play nice.

Two days later, disaster hit another controversial Bush Cabinet choice when Linda Chavez, the labor secretary nominee, became embroiled in a classic "Nannygate" scandal after press reports revealed she had housed and employed an illegal alien in the early '90s without paying the proper taxes.

Liberals weren't fond of Chavez either, but her nomination did not draw nearly the heat that Ashcroft's did. So when Chavez fell on her sword, the left shrugged happily and prepared to knock over Ashcroft. But as Chavez stumbled off the public stage, she took a parting shot at "the politics of personal destruction" and her ideological foes.

The Bush team clearly didn't buy that response, and let it be known that Chavez had misled it during the vetting process. But the "personal destruction" line came in handy when it was Ashcroft's turn at bat, and Republicans began to suggest that anything short of official misconduct in his record would be treated as character assassination.

That raised the stakes for his opponents, who had thus far only proved Ashcroft to be a conservative zealot. They needed a smoking gun, a startling revelation of guilt or some stunning public display of Ashcroft's intemperance during the confirmation process to push their effort over the top. They had a fair chance at it, holding four days of hearings on Ashcroft beginning Jan. 16 that featured a well-organized parade of foes.

Among the transgressions discussed were Ashcroft's sketchy treatment of James Hormel, an openly gay philanthropist whom Bill Clinton nominated to be ambassador of Luxembourg; an interview that Ashcroft gave to neo-Confederate journal Southern Partisan; his speech at the now-infamous Bob Jones University; his unseemly "Borking" of Ronnie White, an African-American judge whom Clinton had tapped for a spot on the federal bench; his aggressive battle against school desegregation during his tenure as Missouri's attorney general and governor; and a long list of strident actions he undertook to limit or eliminate abortion rights.

Despite this laundry list, nothing seemed to stick. For one thing, Ashcroft's record was nothing unusual for many of the Republican senators who would be sitting in judgment on him. Other cultural conservatives in the Senate had blasted Hormel over his sexual orientation, Southern Partisan had featured several leading Southern Republicans, like Lott, and Bob Jones University had been a popular Republican stop for years.

As for the rest of the charges, a humble and patient Ashcroft explained most of them away. His opposition to White was caused solely by that judge's questionable opinions in a handful of death penalty cases, he said. Ashcroft never opposed desegregation in principle, but only fought an unreasonable financial judgment mandated by a Missouri court. As for his stands on abortion, Ashcroft didn't deny that he had always been a foe of Roe vs. Wade, but he said he understood the difference between making the law as a senator and enforcing the law as an attorney general.

So the hearings closed with few electric moments and no silver bullet. By that point, Democrats had also suffered their first big defection when Georgia's Zell Miller said that he would back the Ashcroft bid.

Once the Republicans retook control of the committee after Bush's Inauguration, the Democrats had one more week to turn up something convincing against Ashcroft while they kept him busy by demanding responses to more than 300 written questions. The only thing to emerge in that time was an accusation that Ashcroft had once improperly inquired about a prospective employee's sexual orientation. Republicans dismissed this as partisan tall tale, and it didn't make a dent.

In the interim, the prospect of a filibuster disappeared. Ashcroft's chief antagonist, Sen. Ted Kennedy, D-Mass., dropped his threats to talk the nomination to death at the request of Sen. Jean Carnahan, D-Mo. She had taken over the Senate seat once held by Ashcroft, even though Missouri voters actually cast ballots for her dead husband. Because Ashcroft didn't challenge the unusual election results, she seemed determined to make sure that his graciousness was repaid.

Killing the filibuster apparently covered the debt of kindness as far as Carnahan was concerned, because she didn't bother to join the eight Democrats who voted Thursday in favor of Ashcroft's nomination: North Dakota's Kent Conrad and Byron Dorgan, Robert Byrd of West Virginia, Christopher Dodd of Connecticut, John Breaux of Louisiana, Ben Nelson of Nebraska, Miller and, most prominently, Feingold.

Politically, everyone took something from the exchange without losing much of anything. The Republicans got their attorney general, and the Democrats got to make their stand without incurring the GOP wrath that would have followed a filibuster. But those switch-hitting Democrats could get the evil eye from their own base.

During a press conference outside the Senate building held by the groups that opposed Ashcroft's nomination, Feingold was singled out for special condemnation by several activists.

Of the pro-Ashcroft Democrats, Patricia Ireland, head of the National Organization for Women, said, "We were very disappointed with all of them." She was considerably more charitable toward moderate Republicans who strongly disagreed with some of Ashcroft's stands but voted for him nonetheless. "It's the first serious vote by the new president," Ireland explained. "It's their party, and I'm sure the leadership demanded that they toe the line." But Feingold's vote baffled her. "I don't know what he could've gotten out of it," she said.

Ireland wouldn't talk about what punishment Feingold could expect from the feminist community, saying she could imagine maybe supporting Feingold -- "if Feingold were to run again, and Attila the Hun were the other candidate."

Gloria Feldt of Planned Parenthood expressed similar disappointment with the Democrats who backed Ashcroft, singling out Miller and Dodd for an extra "tsk, tsk" and placing Feingold at the top of the list of shame. "What really surprised me was his speech," Feldt said, referring to Feingold's remarks before the Senate Judiciary Committee on Tuesday during which he was highly critical of Ashcroft. "He laid out the case, point for point, about why Ashcroft shouldn't be attorney general, and then he still voted for him," Feldt said. "I hope it was worth it for him."

What Feingold got, aside from the thanks of the opposing party, was a moment in the sun as a political maverick. He was apparently prepared to take the heat, or at least the publicity. (Within hours of Feingold's vote on the Senate floor, the Nation magazine sent out an e-mail notice announcing "an exclusive interview" with the Wisconsin senator in which he reassures the public that "he hasn't gone over to the political dark side" just because he supported Ashcroft.)

The vanquished anti-Ashcroft interest groups were also spinning the bad outcome. "Certainly the progressive coalition did a wonderful job over the last couple of weeks," said People for the American Way chief Ralph Neas. "We made Americans aware of Ashcroft's record, we sent thousands of petitions to members of the Senate, but we couldn't cast the votes for them."

At the very least, Ashcroft's opponents got their objections on the record, and now have a four-year mission of holding his feet to the fire. "If Ashcroft does a good job, no one will be happier than we are. We just cannot picture that happening," said Hilary Shelton, director of the Washington office of the NAACP. "If he doesn't, we'll be ready to hold him, and everyone who supported him, accountable."