Ted Olson? You've got to be kidding

How does Bush expect to "raise the tone" in Washington by nominating a right-wing celebrity and Kenneth Starr pal as solicitor general? 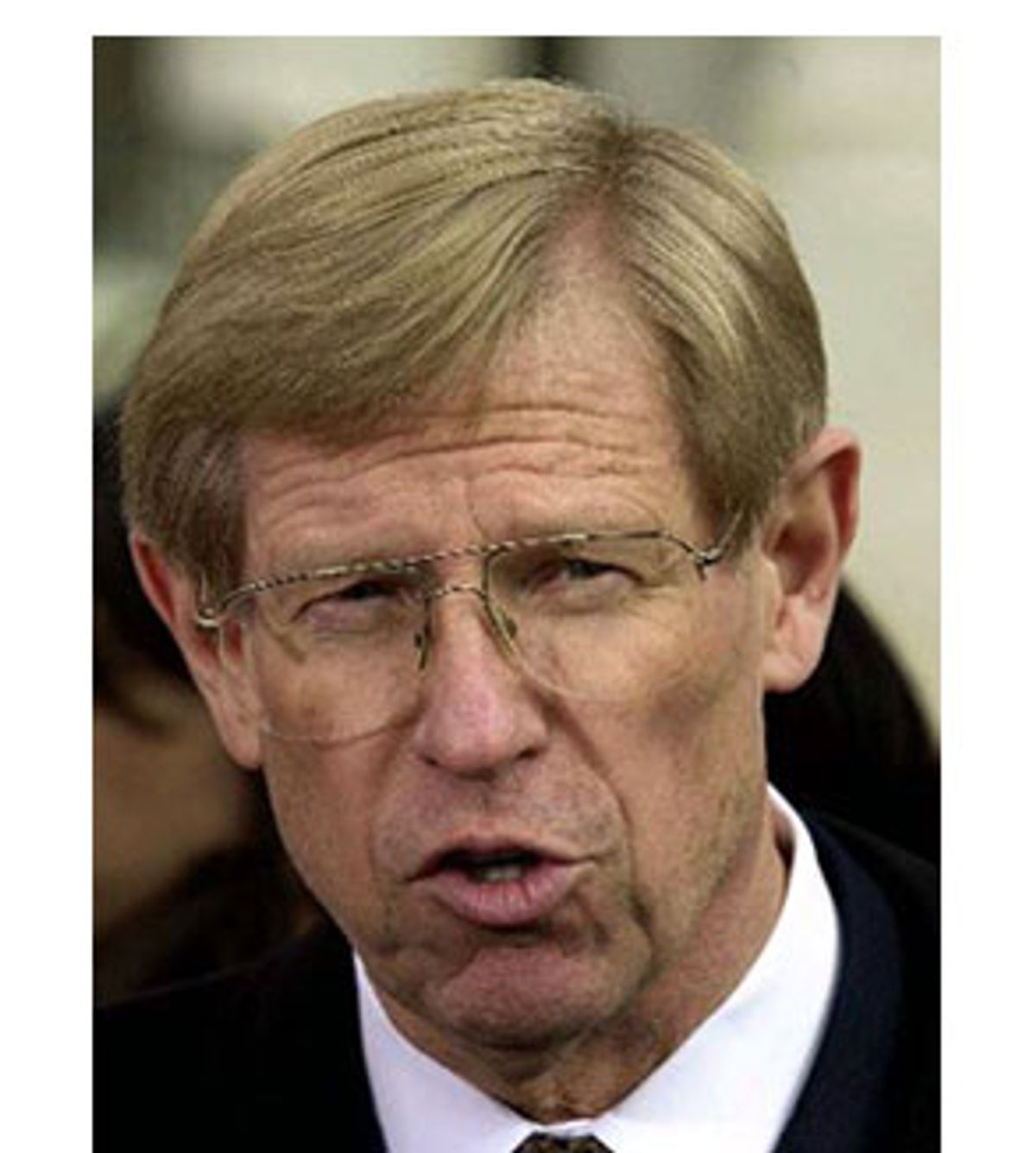 Controversy rarely accompanies the appointment of a new solicitor general, the powerful Justice Department official who represents the United States government before the Supreme Court. But an angry confirmation debate could ensue this month if President Bush names the man whose name was leaked by the White House last week: Theodore B. Olson.

On paper, Olson's qualifications to serve as solicitor general are beyond reproach. He is widely acknowledged to be one of the nation's most experienced and capable appellate litigators, and he possesses more than a dozen of the white quill pens that are given to lawyers when they argue before the high court.

His most recent appearance there occurred in December, when he represented the Bush-Cheney campaign in the Florida election case that divided the court and the nation so bitterly. Aside from the five Supreme Court justices who voted in his favor, there may be no one to whom Bush owes his victory more than Olson.

There is another, darker side to the 59-year-old Republican attorney, however, which may trouble the Democratic senators who would have to decide whether Olson should be confirmed. Over the past several years, this partisan legal warrior has sought the ruin of the Clinton administration and the personal destruction of the former first family by any means necessary.

He was a central figure in the shadowy "Arkansas Project," which funneled more than $2 million through the tax-exempt American Spectator magazine to private investigators digging up anti-Clinton dirt. He wrote anonymous articles for the Spectator that suggested that various Clinton administration officials were guilty of felonies, and compared the White House to a Mafia crime family. And he secretly coached the lawyers for Paula Jones before their own appearance at the Supreme Court.

Indeed, considering Olson's furious obsession with the Clintons and his dubious conduct in pursuing them, his appointment would cast grave doubt on the new president's vow to "raise the tone" of public life in the capital.

Olson's career as a conservative lawyer is full of ironies. His long association with the Republican right dates back to the 1970s, when he worked in the Los Angeles offices of Gibson, Dunn & Crutcher with William French Smith, later the first attorney general in the Reagan administration, and Kenneth Starr, who joined the Reagan Justice Department along with Olson and Smith.

Among Olson's clients then was Ronald Reagan, whom he continued to represent as a private attorney during the Iran-Contra investigation. Through the Bush and Clinton years, when Starr served as solicitor general himself and then as the Whitewater Independent Counsel, Olson has remained one of Starr's closest personal friends and political associates.

Before he returned to private practice in 1985, Olson had an ill-fated sojourn as assistant attorney general. His actions and testimony during a congressional investigation of corruption at the Environmental Protection Agency led to the appointment of an independent counsel to investigate him.

No criminal charges were brought against him, but the independent counsel's report strongly suggested that Olson had intentionally misled Congress even though his testimony had been "literally true."

That four-year probe was financially and emotionally torturous for Olson, who fought all the way to the Supreme Court in an attempt to overturn the independent counsel statute on constitutional grounds. The court's historic decision against him in Morrison vs. Olson set the stage for his friend Starr's meandering six-year investigation of the Clintons and their associates a few years later.

The acidulous partisanship that characterizes both Olson and his wife Barbara, an attorney who expresses their viewpoint in frequent appearances as a conservative television commentator, may derive from his ordeal in the EPA case, which he blamed on congressional Democrats who demanded an investigation of him.

Since returning to private practice at the Washington offices of Gibson, Dunn, he has become not only a prominent appellate attorney but an eminence grise in the capital's conservative circles.

Like his wife, he has served on the boards of various conservative foundations and think tanks, including the Washington Legal Foundation and the Independent Women's Forum, many of which are financed by Pittsburgh billionaire Richard Mellon Scaife. The Olsons' home in McLean, Va., is virtually a cocktail lounge for the likes of Starr, defeated Supreme Court nominee Robert Bork and other right-wing celebrities.

But it is Olson's role in the anti-Clinton activities of the American Spectator that could become a severe embarrassment to him in confirmation hearings. The "Arkansas Project," also paid for by Scaife, was created in his law firm's offices in late 1993, around the time that Olson agreed to represent David Hale, the corrupt Little Rock judge who eventually became Starr's chief witness against Bill Clinton in the Whitewater case.

Although the American Spectator is published by a tax-exempt foundation that cannot use its funds for partisan purposes, Scaife's millions were used by the magazine in a covert effort to destroy Clinton and other Democrats. After the project was exposed in 1998 by Salon and other news organizations, a special counsel was appointed by Starr and the Justice Department to determine whether any money was used to illicitly influence Hale's testimony.

That special counsel, former Justice Department official Michael Shaheen, eventually filed a 168-page report that found Hale had not been paid to testify. But the rest of the Shaheen report, which presumably details the unsavory activities of the Arkansas Project and its detectives, has remained under seal. Its contents may be of interest to Democrats on the Senate Judiciary Committee as they consider an Olson nomination.

They may also ask Olson to explain the circumstances behind his role in Monica Lewinsky's interview by Barbara Walters on ABC in 1999. The former White House intern's plea agreement with Starr required her to obtain his permission before any media appearance. Somehow Starr's friend Olson ended up representing Lewinksy -- for a hefty fee of $25,000, paid by ABC -- when she sought and received Starr's approval of the Walters interview.

The pertinent questions regarding Olson go beyond his anti-Clinton entanglements. Among his colleagues in the federal bar, he is just as well known for his strongly conservative stance on civil rights and affirmative action.

If the cases he has handled represent his personal views, then Olson apparently worries much more about discrimination against white men than against minorities, women and gays.

He defended the Virginia Military Institute's prerogative to exclude women, despite the school's state funding. He also defended the Colorado initiative that would have barred cities and towns from enacting gay rights statutes. Although he lost both of those cases in the Supreme Court, he won a landmark case that overturned affirmative action in admissions to the University of Texas Law School.

And of course there is the lingering matter of his advocacy on behalf of Bush in Florida, where civil-rights groups are preparing to sue state officials over alleged abuses of minority voters.

Olson's nomination as solicitor general might be a mere prelude to something even bigger. He certainly wouldn't be the first occupant of that office later named to the Supreme Court. The last, and the most notorious, was his old friend Robert Bork.