In a new documentary, the archetypal cyberpunk author displays his new obsession: Media, not technology. 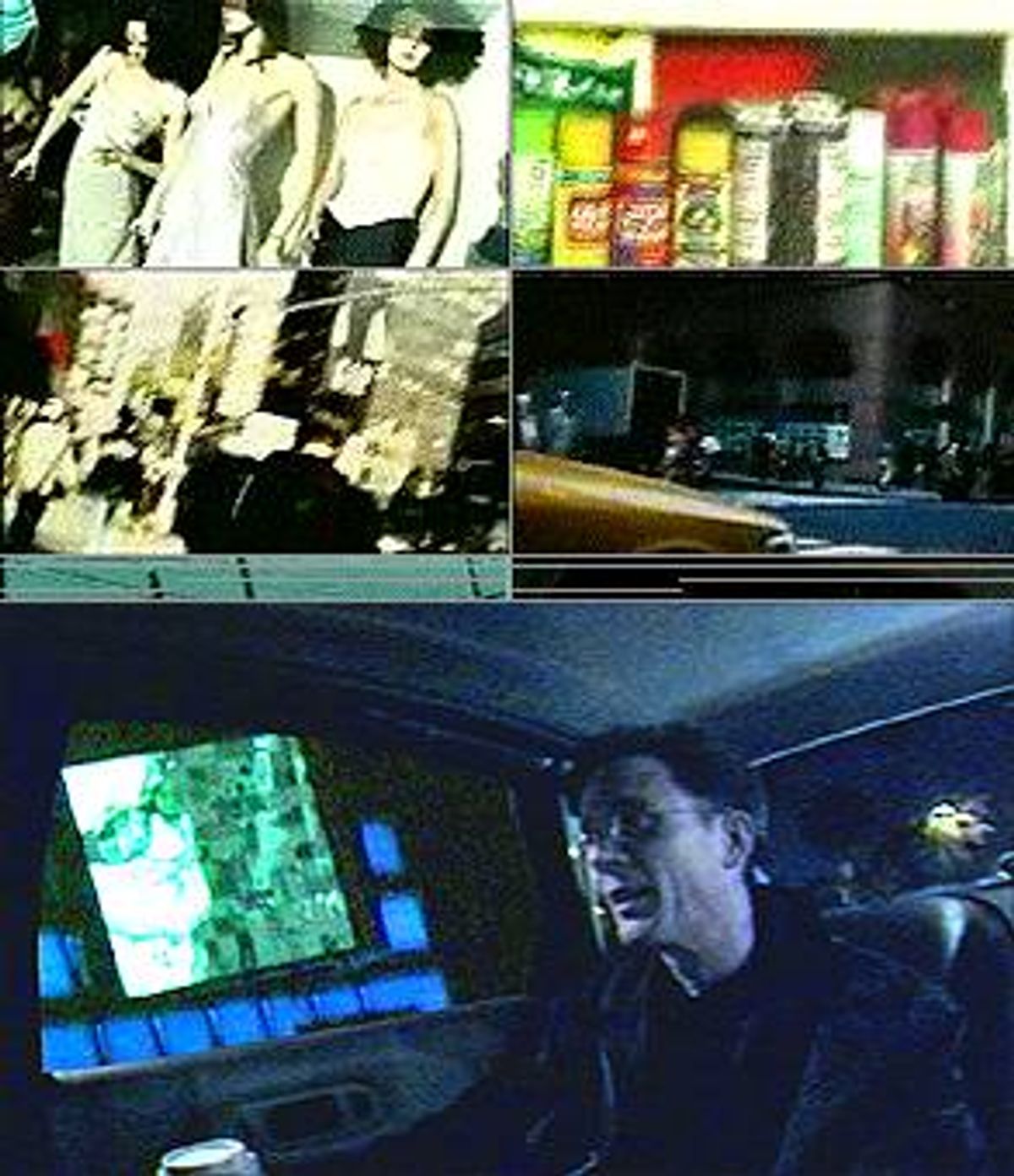 Sitting in the back of a limousine, alternately smoking a cigarette or smiling at the unexpected results of his own eloquence, William Gibson looks comfortable. That's a good thing, too, since the vast majority of "No Maps For These Territories" -- an 88-minute documentary about the science-fiction author that screened at this year's Slamdance festival -- is shot, literally, on the road.

As he reclines, protected by his seatbelt, and occasionally, by a pair of dark sunglasses, he exists in nowheresville. We don't know where Gibson's going or where he's been. Every now and then we glimpse a freeway sign or some shimmery neon. Director Mark Neale also likes to play visual tricks -- overlaying images across the car windows that are obviously not the local landscape. Neale has a background in music video, and he employs plenty of MTV jumpiness to illustrate his narrative. The general effect is unsettling -- we're always moving, but never getting anywhere. But the technique also helps concentrate the viewer on what's important -- Gibson's words: his elaborations on the act of writing, his personal history, drugs, religion, pornography and, of course, the Internet, or, to use the word that most everybody knows by now Gibson coined, cyberspace.

Gibson's 1984 novel "Neuromancer" is widely credited with creating an iconography for the Internet age, long before the mainstream world had embraced the Net (or Gibson had even embraced the computer). As a result, Gibson is a kind of cyber-pop-star, endlessly profiled and interviewed, sought after as a writer for magazines like Wired and TV shows like "The X-Files." He's also not the easiest person to ask questions of. I interviewed him in the fall of 1993, as he was doing book promotion for "Virtual Light," and found him politely resistant. His answers had the tone of a person who has answered too many questions already. The soft traces of his Virginia drawl helped him sound friendly, but not too forthcoming.

Which is why "No Maps For These Territories" is a delight: Gibson lets his hair down and comes clean. He is refreshing as he discusses such topics as his own history of drug use -- at one point, he notes, his goal was to sample every narcotic substance in existence -- and Vietnam War draft dodging: It wasn't so much politically motivated, he says, as it was a result of his desire to continue sleeping with "hippie chicks."

But he's most interesting when he talks about his own philosophy of life, in conjunction with the act of writing. At one point, Gibson goes zen. In our unexplainable world, our constantly changing world, our technologically transforming world, figuring things out is not an option. All you can do is live in the moment.

As a writer, Gibson says his goal is to make that moment accessible. He's not really writing science fiction, he likes to point out; instead, he's reflecting current reality back at his readers disguised as science fiction.

As its title indicates, "No Maps For These Territories" intends, also, to exist in that unknowable present. Stylistically, the constant movement without any explicit direction illustrates Gibson's gist without getting in the way. If you are a Gibson fan, or acolyte, much of what Gibson has to say will be familiar at some level. But it's never quite been put together so fluidly or completely. Paradoxically, if Gibson himself could be considered a territory, then "No Maps" has caught him with a rigorous surveyor's eye.

Despite the difficulty I had eliciting expansive responses from Gibson in 1993, I still recall the interview with special fondness, because the article that resulted was the first thing I wrote that did not appear in hard copy until it rolled off the presses. I was on the road, myself, when I talked to him by phone, and filed my copy by modem without ever printing it out. I had just become hip to the Internet that summer, and it seemed all too appropriate that my Q and A on Gibson would be so enmeshed in the information matrix. I even began the interview by noting to Gibson that fans of his work were sharing pirated copies of "Virtual Light" in Usenet newsgroups. How did one of the original cyberpunks feel about that? (He was only mildly interested.)

In 2001, the glamour of the Net has faded somewhat. But at the same time, technological change has raced forward so fast that the cyberpunk visions of just 10 or 15 years ago are now passé. In "No Maps" Gibson acknowledges that the pace of change -- and the fundamental absurdity of the change -- makes it increasingly challenging to do what he does, to imagine a future somehow off-kilter from the present. He recalls another writer sending him a note with the news that Michael Jackson had married Lisa-Marie Presley. "This makes your work harder," read the note.

Why would a cyberpunk science fiction writer care about who Michael Jackson has married? In 1993, oddly enough, Jackson's name never came up when talking to Gibson. But by 1996, he was already writing about virtual pop stars (in "Idoru"), and by 2001, the world Gibson envisioned in "Neuromancer" had merged seamlessly with the world of pop culture.

Gibson believes modern life is inseparable from mediated interpretations of that life. The Internet is well on its way to becoming the vehicle by which all media is distributed or at least somehow refracted. So Gibson's current preoccupation with "media" rather than cool hackers zipping through virtual realities makes perfect sense.

As Gibson notes in "No Maps," "younger readers" of his find this disappointing. They read "Neuromancer" and then they want to read "Neuromancer II." But Gibson is not the same man who wrote "Neuromancer." And he says he can't access the same wellspring that gave birth to that novel. Nor does he want to.

In "No Maps," Gibson suggests that the author who wrote "Neuromancer" was, in some very real sense, crazy. But the Gibson who toodles around town in a limousine getting filmed by Mark Neale is no longer crazy. Judging by how often he smiles, and how relaxed he appears on camera in the back of an automobile, he's a pretty well-adjusted guy.

And maybe that's the weirdest thing about "No Maps." Visually, the documentary could be considered the kind of hyper-kinetic avant-garde work one would expect from a music video director who is profiling a cyberpunk. But amidst all the motion, the constant change, the unknowability of the now, the culture of infinite mirrors, Gibson is cool and calm. Maybe the future isn't that scary, after all.