In his first day teaching at Columbia, the former vice president starts out nervous -- but relaxes enough to critique the media. 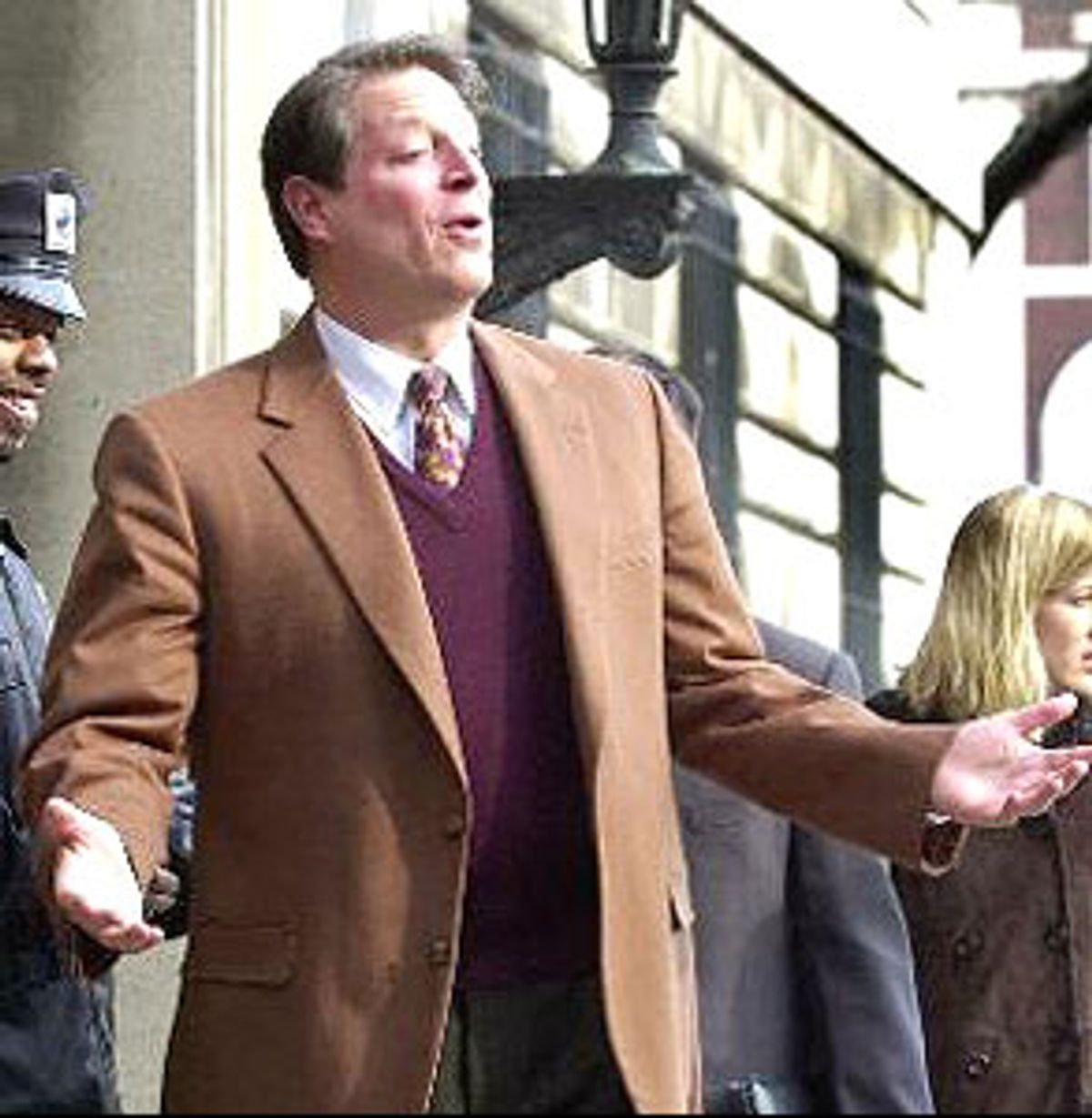 Tuesday was Al Gore's first day as a professor, and according to some of his students, it seemed like it. The graduate journalism students at Columbia University say he seemed nervous and not quite sure what to do with himself, and repeatedly asked them to bear with him since he was new to teaching. "It took him a long time to relax," said Marguerite Reardon, a 27-year-old grad student. "I used to be a teacher so I could feel for him." Gore's daughter Karenna reportedly sat in the back of class to offer moral support.

Columbia is one of four teaching stints Gore will do over the next year, along with the University of California at Los Angeles, Middle Tennessee State University and Fisk University.

Exactly what the former vice president said during his 90-minute class, called "Covering National Affairs in the Information Age," is unknown, since the media were not allowed into his seminar and students were forbidden to divulge the content of his lecture. When some reporters loudly complained to Gore about the lack of access as he entered and exited the class, he responded, "It's the school's policy," before walking past the secret service agents guarding the entrance to the J-school.

Once inside the classroom, students say, Gore came across as the wonkish, somewhat abstract figure they were familiar with from television interviews and press reports. Writing on a white board with a red marker, he used baffling terms like "news derivative" and "technology co-efficient" that even former aides said they had never heard before. When the few students who would talk on background tried to explain what his lecture was about, they were at a loss. "I couldn't tell you what it was about," said one student. "The thing was long on theory and a lot of it was lofty. He never rolled up his sleeves and gave hard examples of what he meant."

Former staffers said that during his bid for the presidency, Gore was angered by a media he believed held him to a higher standard than his contender, President George W. Bush. (By way of example, aides pointed to the flap over Gore's statement in the first debate that he was in Texas surveying fire damage with FEMA head James Lee Witt, when in fact he was with Witt's deputy. Gore believed that the media blew up this misstatement as a damning example of his tendency to exaggerate, yet forgave Bush for much more serious misstatements, such as his incorrect claim that all of the men responsible for the murder of James Byrd had been sentenced to death.) And one of his main themes, according to students, was the media's increasing tendency to simply repeat stories that appear in other publications, without checking to make sure that the stories were accurate or doing any original reporting. "That happened a number of times during the campaign -- the press picking up a story and running with it -- so it's understandable that he's sensitive to it," said a former aide. "The whole press pack fed off each other; nobody wanted to miss some issue that somebody else had glommed on to...The media exaggerated [Gore's] exaggeration."

But aides also acknowledged that Gore, a former newspaper reporter himself, used that same system to get out stories that were politically damaging to his opponent and helpful to his own case. "He understood that dynamic and played it," the aide said. "Thus we would leak stories to somebody at the New York Times and then everybody else would have to follow. We did that with 'Rats.'" (He was referring to the infamous Bush ad assailing Gore, in which the word "RATS" appeared when the tape was slowed down.).

At one point, Gore walked "town hall" style through the room, calling on students to answer questions. Most students said that as he loosened up, he was really quite funny, even making self-deprecating remarks about losing the election.

"There wasn't anything juicy to warrant it being off the record," says Andy Pergam, a 22-year-old student from Bethesda, Md. "It was a lot like the first day of school -- you figure out who the professor is; they get to know you. I think he was trying to gain our trust in him as a professor by showing us how much he knows about the media. He was a smart guy." Pergam said he wished that Gore had offered more inside information about how politicians deal with the media, rather than simply a theory he could have read in a textbook. Maybe, he said hopefully, Gore was reserving that for future classes.