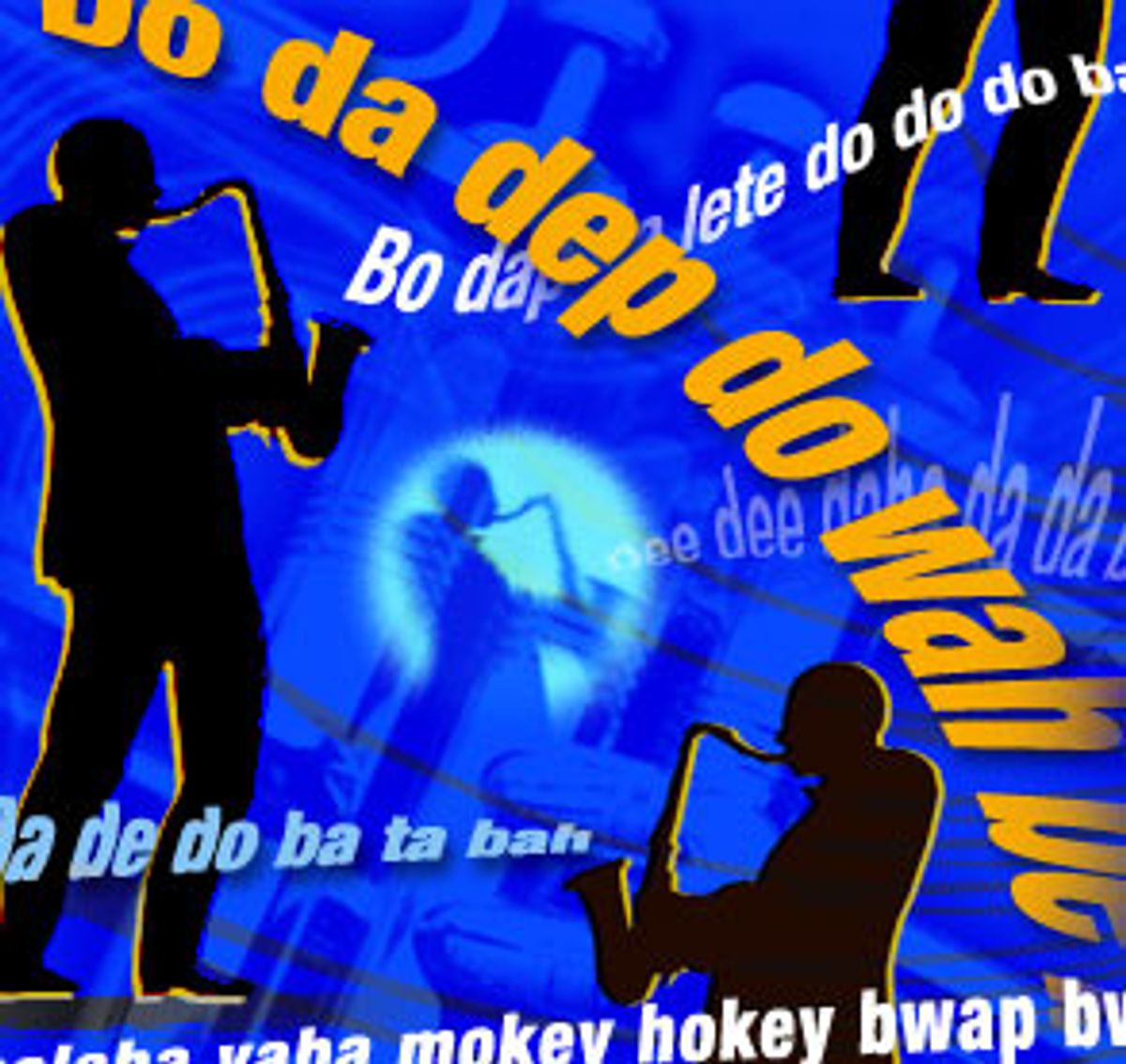 [Fade up on a grainy old photograph of a man in a three-piece suit, holding a cornet. Or a bicycle horn, it's hard to tell.]

Wynton Marsalis: I'll tell you exactly what Skunkbucket LeFunke sounded like. He had this big rippling sound, and he always phrased off the beat, and he slurred his notes. And when the Creole bands were still playing, "De bah de bah ta da tah," he was already playing, "Bo dap da lete do do do bah!" He was just like gumbo, ahead of his time.

Stanley Crouch: When people listened to Skunkbucket LeFunke, what they heard was, "Do do dee bwap da dee dee de da da doop doop dap." And they knew even then how profound that was.

Narrator: It didn't take LeFunke long to advance the art of jazz past its humble beginnings in New Orleans whoredom with the addition of something you've probably never heard of before, the Big Four.

Crouch: It was smooth and responsive, and there was no knocking and pinging, even on 87 octane!

Crouch: Tootsie-Roll is a name that's sexual in nature. Let's just say it's that motion you get when you roll your tootsie, OK? And the people then -- don't kid yourself -- they understood this. And it was very profound.

Marsalis: Tootsie-Roll went "Deep daap da dee dap doop doop bowp bawp." And no one in New Orleans had ever heard that before. In fact, he often put a handkerchief over his head when he sang so no one would steal his stuff.

Narrator: He agreed to make a record, but only if they kept the recording machine turned off.

Crouch: And when you listen to that record today, you hear silence. But he did triumph -- white cats never stole his stuff.

Marsalis: Actually, even though there's nothing on that record, I know what he sounded like, because I am attuned to the highest level of spirituality to which he played. He sounded like this. [Marsalis throws handkerchief over head] "Dweep dep da dee dee bah bah du du bwab be beee."

Narrator: When any musician in the world heard Louis Armstrong for the first time, they gnawed their arm off with envy, then said the angels probably wanted to sound like Louis. When you consider a bunch of angels talking in gruff voices and singing "Hello, Dolly," you realize what a stupid aspiration that is.

Gary Giddins: Louis changed jazz because he was the only cat going "Do da dep do wah be be," while everyone else was doing "Do de dap dit dit dee."

Crouch: And that was very profound.

Matt Glaser: I will always have this fantasy that when Louis performed in Belgium, Werner Heisenberg was in the audience, and he was blown away by Louis' freedom and that's where he got the idea for his uncertainty principle. And I will always believe that even if you say it's crazy.

Marsalis: Because the uncertainty principle, applied to jazz, means you never know if a cat is going to go "Dap da de do ba ta bah" or "Dap da de do bip de beep."

Crouch: And that can be very profound.

Narrator: The Savoy Ballroom brought people of all races, colors and political persuasions together to get sweaty as Europe moved closer and closer to the brink of World War II.

First Savoy Dancer: We didn't care what color you were at the Savoy. We only cared if you were wearing deodorant.

Glaser: I'll bet Arthur Murray was on the dance floor and he was thinking about Louis and that's where he got the idea to open a bunch of dance schools.

Crouch: And that was very profound.

Giddins: Let's talk about Louis some more. We've wasted three minutes of this 57-part documentary not talking about Louis!

Marsalis: He was an angel, a genius and much better than "Cats."

Crouch: He invented the word "cats."

Crouch: People today wonder why it's called scat singing. But back then -- don't kid yourself -- they knew what it meant.

Marsalis: There was even a song, "Don't Give Me None of Your Scat."

Crouch: And that was very --

Glaser: I'll bet Chuck Yeager was in the audience when Louis was hitting those high Cs at the Earle Theater in Philadelphia, and that's what made him decide to break the sound barrier.

Crouch: And from there go to Pluto.

[shot of an empty chair]

Marsalis [off camera]: I'm making gumbo. Who wants some?

Narrator: In 1964, John Coltrane was at his peak, Eric Dolphy was in Europe, where he would eventually die, the Modern Jazz Quartet was making breakthrough recordings in the field of third stream music, Miles Davis was breaking new barriers with his second great quintet and Charlie Mingus was extending jazz composition to new levels of complexity, to name just a few. But we're going to talk about Louis singing "Hello Dolly" instead.

Ken Burns: The reason I made "Jazz" is, I wanted to see if I could make a documentary that felt longer than the history of jazz itself, and yet still leave out half the great people because "there wasn't enough time."

[Grainy shot of King Kong crushing airplanes with his fists.]

Narrator:It is tall and majestic. It is America's building. It is the Empire State Building. Dozens of workers gave their lives in the construction of this building.

Glaser: I'll bet that they were thinking of Louis as they were falling to their deaths. I have this fantasy that his high notes inspired the immenseness of the Empire State Building.

Announcer:That's next time on PBS.