Mayhem at the White House

Confusion, false early information and -- hey, did someone hear gunshots? 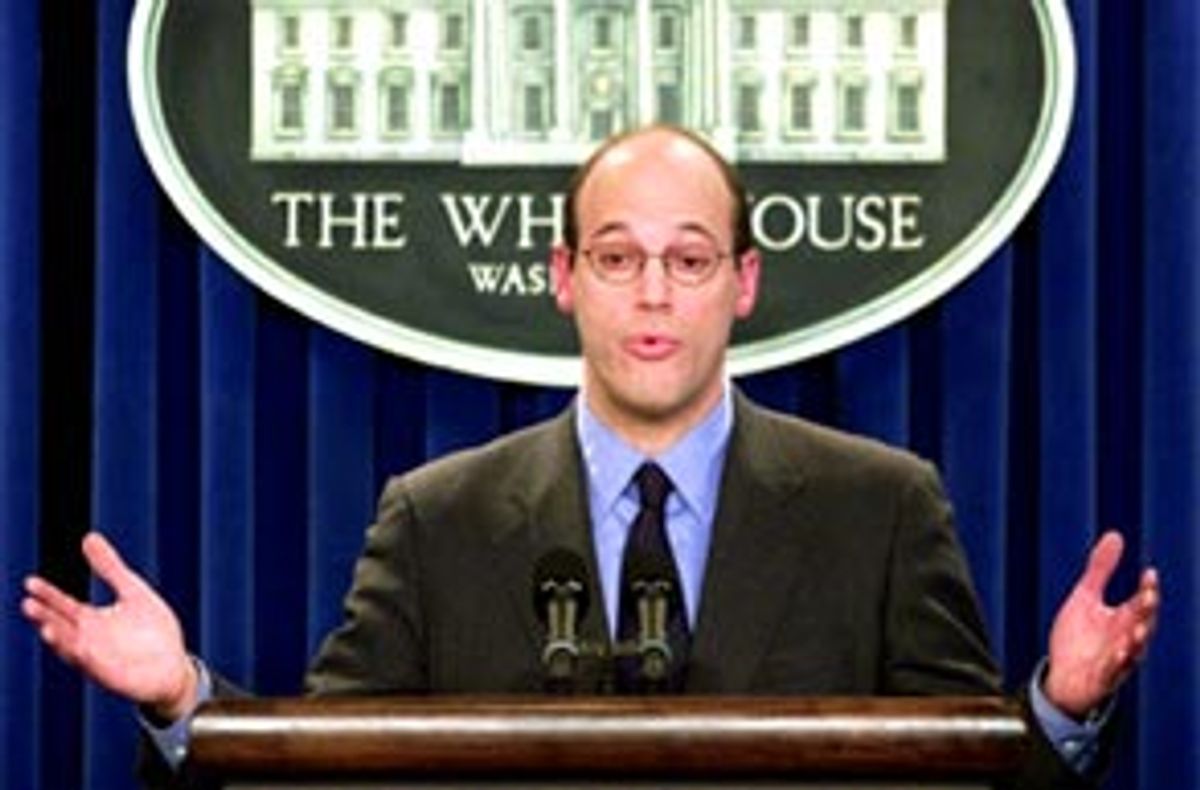 Slight cracks in the veneer of a smoothly operating Bush administration began to appear Wednesday, having absolutely nothing to do with the armed Hoosier who was detained by the Secret Service at 11:30 in the morning.

Reporters were in a mini-froth, confused, skeptical of the official explanation. And then came ... the sound of gunshots.

At the time of the incident, both the president and vice president were perfectly safe. President Bush was in the residence "working out," and Vice President Cheney was in the West Wing "working," spokesman Ari Fleischer told the press corps.

Thankfully, the only person at all injured was the gun-wielding accountant, Robert Pickett, whose right knee was shot out by Secret Service agents at the conclusion of a 10-minute standoff. The shooting incident temporarily distracted attention from questions about the internal communications processes of the new administration, and just what exactly was going on.

"The presumption that a White House bureaucracy looks the same from administration to administration is a myth," Card told USA Today Tuesday. The AIDS and race issues would be folded into other offices; an AIDS coordinator would be added to Bush's Domestic Policy Council, while race relations were to be handled by the Office of Public Liaison. As of 9:15 a.m. Wednesday, that was the story.

Scarcely an hour later, everything had changed.

"Andy Card informed us at our senior staff meeting this morning that he was incorrect on his description of the AIDS office," Fleischer told reporters. "He made a mistake. It happens."

Fleischer was not able to explain how the White House chief of staff could fall under a mistaken impression that two White House offices were being eliminated.

Finally, that was settled. But also raised at Wednesday's briefing was the fact that Bush's proposed military budget will differ very little from former President Clinton's defense budget, and how that squares with Bush-Cheney campaign rhetoric to increase defense spending $45 billion over 10 years.

"My first budget will go further," Bush said in September 1999, "adding a billion dollars in [military] salary increases." In an August speech to the Southern Center on International Studies in Atlanta, Cheney accused the Clinton-Gore administration of "eight years of neglect and misplaced priorities" with the military, with an "underresourced" armed services. "Defense spending today is lower as a percentage of GNP than at any time since 1940, the year before the attack on Pearl Harbor," Cheney said.

But Tuesday, Secretary of Defense Donald Rumsfeld had announced that the Bush defense budget would not surpass Clinton's. "The question is," a reporter asked, "was Rumsfeld right in what he told the Joint Chiefs and the people at the Pentagon yesterday, or will we, in fact, have an increase?"

"Let me talk with Secretary Rumsfeld to see the exact context of what he said," Fleischer said.

Perhaps the most satisfactory answer of the day came when a bombastic Baltimore radio host asked Fleischer about the appropriateness of Al Gore's new class at Columbia Journalism School, considering Gore once went 62 days during his campaign without a press conference. The question to Fleischer: Will Columbia Journalism School graduates be trained in how to deal with presidential candidates who avoid answering questions?

"I hope not," Fleischer slyly joked.