Hippie chicks and an Oprah-ready plot reduce the radicalized '60s to nothing more than feelings. 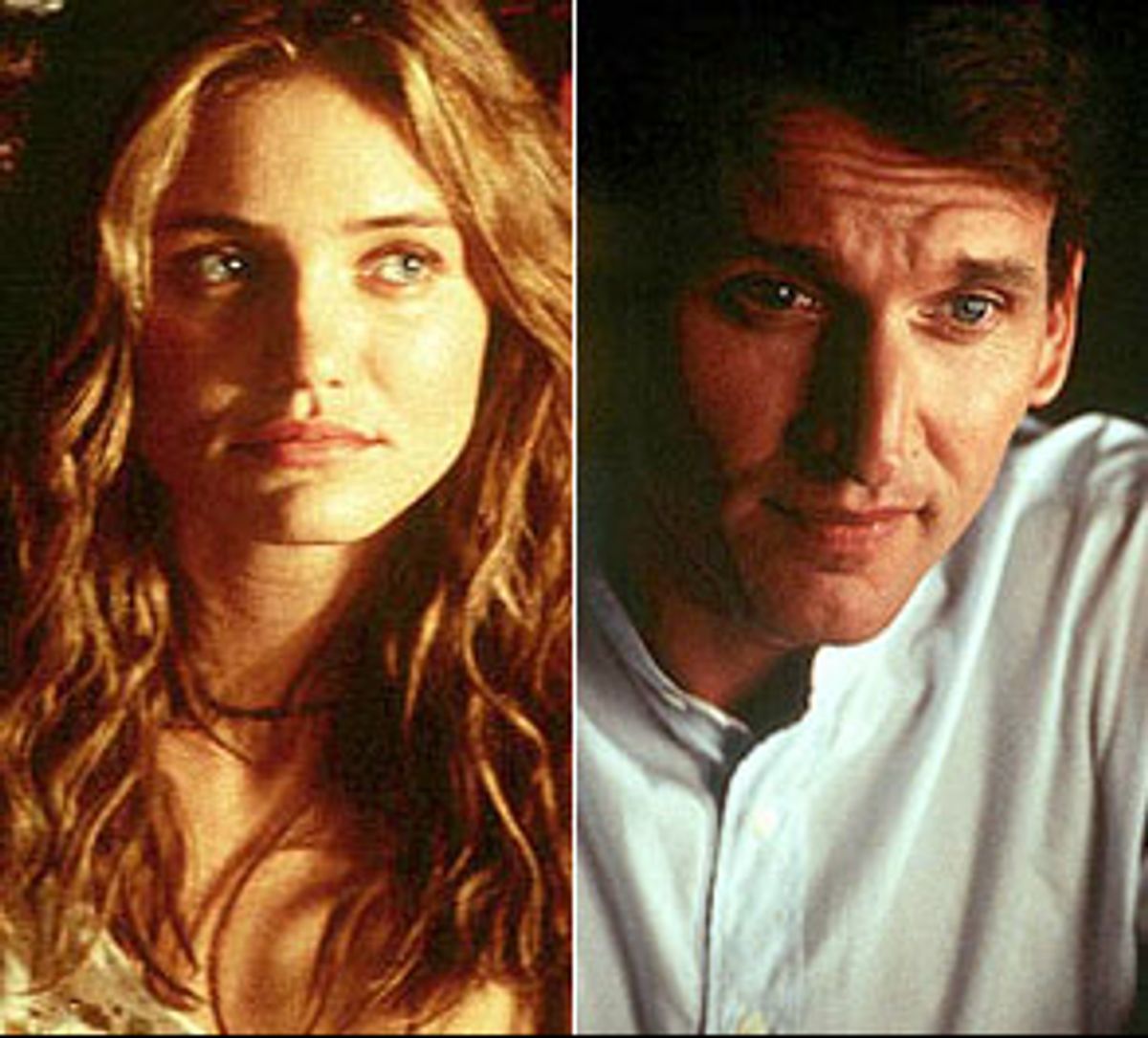 On the surface, Adam Brooks' "The Invisible Circus" has a big, still-potent subject. It's about the '60s kids who got caught up in radical politics and the decade's general topsy-turviness and never found their way back to a stable life. I haven't read the Jennifer Egan novel on which the film is based, so I can't judge its faithfulness, but the movie unfortunately plays out like a lot of other books in a weird genre that has emerged in the past 15 years. "The Invisible Circus" is the film equivalent of the literary women's novel, the type of book that reduces every topic -- no matter what the social or political context -- to feelings. And just to be clear, by feelings I mean something distinct from the messiness and largeness of emotion, something small, insular and precious.

Watching "The Invisible Circus," you'd never know that the '60s were about anything bigger or more important than a young girl's sense that, darn it, she just didn't fit in. The movie pays lip service to the sense of injustice that so frustrated some politically engaged young people that they became convinced that the violent radicalism of the Weathermen or, later, the Red Brigade and the Baader-Meinhoff gang was the only means of redress.

In the film, Faith (Cameron Diaz) becomes convinced that capitalism is to blame for her father's death, that the system itself is so killing that he was actually poisoned. She's so disconsolate that she eventually kills herself. We learn of her death in flashback. The body of the movie takes place six years later in 1977, as her adoring younger sister, Phoebe (Jordana Brewster), follows Faith's trail to find out what happened.

As a film, "The Invisible Circus" represents the Oprah-ization of the '60s. The movie recalls the television interviews that '60s fugitive Katherine Ann Power, the getaway driver in a bank robbery that left a Boston cop dead, gave when she surfaced. There was a special horror to those interviews, as if the frighteningly detached radicals of Jean-Luc Godard's 1967 "La Chinoise" had been imagined by Anna Quindlen. In those interviews, Power, with her hard, blank face, gabbled on about the turmoil of the '60s and the way she came to feel that stopping the Vietnam War was so urgent it justified robbing a bank.

The interviews were meant as an expiation, but Power couldn't have made a more effective case against herself if she had testified for the prosecution. Her neat little recitations were absolutely divorced from any sense of responsibility or self-disgust, any acknowledgment of the political naiveté of her actions. The only spark came when she talked about how she was swept up in the confusion of the '60s, how difficult and scary her life on the run had been, how tough it was to tell the truth to her teenage son. In essence, she elevated her feelings above anything else. Her interview gave the sense that any action could be adequately explained -- and thus absolved -- by saying, "This is what I was feeling."

While watching Faith's story in "The Invisible Circus" I kept asking myself, "Why should we care?" Other novels and films -- Philip Roth's book "American Pastoral," Karel Reisz's film "Who'll Stop the Rain," Paul Schrader's film "Patty Hearst" and Hearst's own memoir, "Every Secret Thing" -- have evoked the '60s and the early '70s through stories that don't focus exclusively on politics. But history is present in every moment of those works, even in the most mundane interactions; no one, even the most deluded characters, ever seems to feel that he is bigger than history.

The events that form the background of "The Invisible Circus" are just that: background. History here is mostly an intrusion, an annoyance, something that gets in the way of the characters' feelings. They are so focused on their sensitivity and disappointments and losses that they come to seem inhuman, grandly self-absorbed.

"The Invisible Circus" isn't junk. It's carefully, competently made, though with no particular feeling for technique or rhythm. But the reductiveness of its approach is relentless. It's a movie for people who are so sensitive they barely notice the feelings of others or what's going on in the world.

Phoebe is the central character, but the movie barely has a consciousness outside her. While piecing together the lives of both her sister and her father (played in the film's flashbacks by Patrick Bergin), she learns that there was more to her beloved sister's life and death than she knew, and that her father was not the perfect man she had idealized. While it's reasonable to think that the discoveries she makes would be cataclysmic for a 17-year-old, the film doesn't acknowledge that they are also the unhappy and perhaps necessary discoveries we all make as part of becoming an adult. Brooks thus short-circuits any sympathy for Phoebe by according her discoveries the scale on which a 17-year-old would experience them.

In her peasant blouses and skirts, beads and bangles, Diaz looks right as Faith. Those wide features of hers (and the mousy brown color and long, wavy perm her hair has been given) call up both the appeal and the vacancy of hippie girls. There's something invitingly, even frankly, sexual about her, and she has the vacuous spontaneity of someone who'd think there was nothing freer than riding a carousel in the rain. But the role denies Diaz her best quality: that slightly manic spark you see in "Charlie's Angels" or "There's Something About Mary" -- in her eyes or whenever her smile brings out her dimples. She's playing the type of girl who haunts the memories of the people who knew her years after she's gone and yet, as an actress, Diaz has been washed out of this film.

Two actors manage not to succumb to the movie's aggressive sensitivity. As Phoebe and Faith's mom, that great unsung jewel of American acting Blythe Danner conveys the grounded quality that has always made her one of the most recognizably real people ever to step in front of a camera. Her one-of-a-kind brandied voice has taken on a slight husk that makes her seem more down-to-earth than ever. Danner has a peculiar manner of expressing concerned affection that appears something like disappointment. The way she looks at young Phoebe conveys her knowledge that she's not going to be able to save the girl from making her own mistakes, but, somehow, there's no guilt or self-recrimination in the expression. It's the most compassionate example of tough love I've ever seen.

And as Wolf, Faith's old boyfriend who becomes Phoebe's lover, Christopher Eccleston etches a portrait that, I think, stands utterly alone in the way movies have portrayed characters who lived through the '60s. Eccleston can seem the most sensitive of actors or the most showy. His work here isn't as amazing as he was in Peter Medak's "Let Him Have It," but it may be his best screen performance.

Movies have tended to portray '60s veterans as either haunted burnouts or yuppie hypocrites. Eccleston plays Wolf as a guy who entered fully into the spirit of the decade but, at the point when the madness of the time was imploding, stepped back out of fear and a sense of self-preservation. What makes Wolf a unique character is that he refuses to apologize for his choice.

Phoebe tracks down Wolf in Paris, where he's living with his French fiancée, and Eccleston portrays him as a man who feels no guilt about the good, productive life he has built. When he explains to Phoebe, who knew him when she was a child, about Faith and about the decade itself, there's none of the condescension that's common when people who lived through the '60s talk to younger people who didn't. Nobody, he tells her, could exist at the continuous pitch of intensity that Faith had decided was the only way life should be lived.

The scenes where Phoebe and Wolf become lovers are erotic, sad and more than a little creepy. It's as if both characters are trying to invoke Faith and exorcise her hold on them. But what's most striking about Eccleston's performance is that it captures the difference between compromise and selling out. Wolf is the character here who's most aware of the past. It informs every part of his life, even though his life is about leaving that past behind. Eccleston, who is always sympathetic even when he's insisting on the hard facts, gives one of those rare performances where just living one's life seems a heroic act.