In the realm of the senses 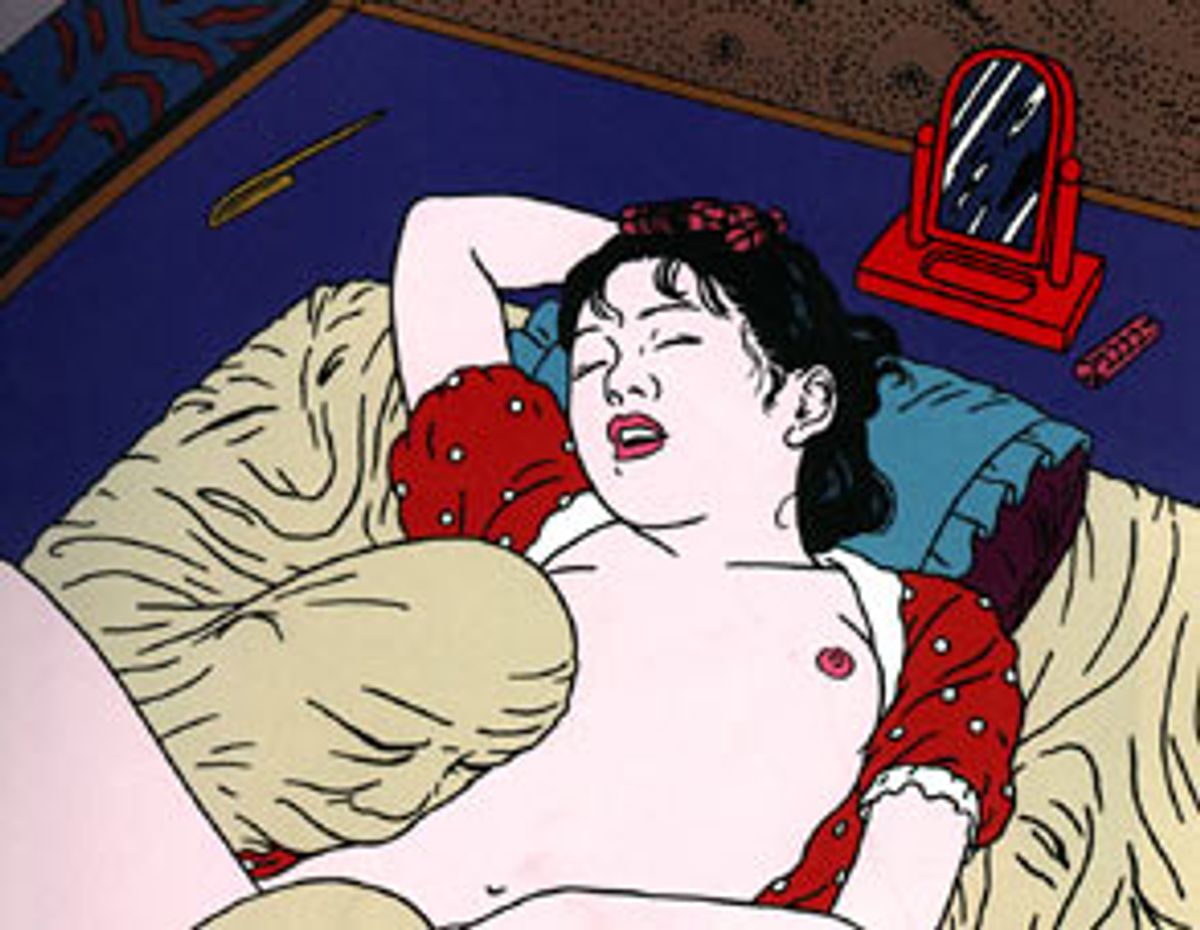 Saeki, 55, is the godfather of Japanese erotica -- the one illustrator in the frenetic, oversexed, comics-crazy nation whose imagination outpaces all others. For decades, the art cognoscenti of Japan and elsewhere have hailed him as a psychosexual dream weaver who traverses all taboos with oozing, bloody scenes of insatiable carnality. Now he's being rediscovered by young adults in America and Europe for whom Japanese illustration, anime (animated cartoons) and manga (comic books) are perpetual sources of fascination.

Sexual incontinence is Saeki's overriding theme. In collections of his drawings such as "Chimushi I & II" and "Toshio Saeki: The Early Works" (both published in Japan by Treville Co.), he has navigated the outer limits of sexual obsession with a monomaniacal intensity. In France, his monographs have sold more than 20,000 copies. And Last Gasp, Saeki's distributor in the United States, has difficulty keeping his books in stock. "Chimushi," a two-volume set issued in the mid-1990s, completely sold out its first run here and is now a collector's item.

Just when you believe Saeki has shown you his most outré image, you turn the page and find additional macabre hallucinations of murder and lust. In one, a Japanese schoolgirl flies down a road on her bike, her haunches lifted in the air and her skirt flapping in the wind. She looks behind her in horror to see that her bicycle seat has morphed into a man's groaning face. In another, a young woman sips green tea as she rubs the freshly decapitated head of a soldier against her genitals, his body still upright beside her. There are drawings of necrophiliacs humping corpses and of crazed onanists sawing limbs off others with which to masturbate.

Still, Saeki is in a class all by himself. Erick Gilbert, an editor and Saeki expert at Last Gasp, points out that Saeki's art transcends that of his contemporaries.

"It's like the man has a direct link to his unconscious, and to the collective unconscious of the Japanese people," says Gilbert. "He can mix myth, that dream quality and pure libido. There are very few people who do that. I remember one image of a child standing outside of his parents' bedroom. His parents are sitting on the bed, and the man has his hands between the legs of the woman. But the woman, instead of having a vulva there, has a face, and the man's fingers are inside its mouth. That's a powerful image from the unconscious, the vagina dentata."

Saeki's work is quintessentially Japanese -- from the ethnicity of his subjects to his portrayal of traditional housing with futons, tatami mats and sliding paper doors to his borrowing of various monsters from Japanese mythology. The theme of obsessive sexuality leading to madness and death is common in the film and literature of Japan, and there's a long tradition of Japanese shunga, or erotic prints and paintings, that has been traced back at least to the ukiyo-e (floating world paintings) of the Edo period (1603-1867) in books such as "Sex and the Floating World" by Timon Screech. Screech's book, for instance, contains shunga prints of vaginal inspections (with a cervix's-eye view), dogs humping women and men with colossal, spurting cocks.

"If you look at Saeki's art outside of its cultural sphere, you may be troubled by its violence. But once you go inside that cultural sphere, you know that this violence is well-understood, that 'it's only lines on paper,' to quote cartoonist Robert Crumb. This extreme imagery of Japanese artists, and their characteristic need to go as far as possible, can be traced several centuries back to the so-called bloody ukiyo-e of the 19th century. A number of examples from that era are very violent -- with characters being tied up and swords put to them. That's part of this strain of art," asserts Gilbert.

However, even in Japan, Saeki's morbid aesthetic delicacies have earned him a reputation as an iconoclast. Speaking to me by phone from his isolated home in the mountains of Chiba prefecture, near Tokyo, Saeki explains that he has run afoul of Japanese censors in the past.

"My books have received cautions from the local government agency that monitors such things," says Saeki. "If you receive three cautions in a year, your book is prohibited from being sold in a bookstore. Of course, my publications have been unpopular with the police, but not enough to be banned. At one time, in the late '70s to early '80s, I couldn't draw the schoolgirl images that are so popular now. Publishers were afraid to publish them. The media had labeled me 'schoolgirl Saeki.'

Saeki grew up mostly in Osaka. He studied art in high school, and after graduating pursued graphic design. He worked briefly for an advertising company, but disliked the job. At 24, he took off for Tokyo to try his hand at freelance illustration. With money he had saved, he holed up in a small apartment to develop his portfolio. It was then that he seriously began to create erotica.

"There's a new generation interested in Japanese things now, especially Japanese animation. For instance, there's a writer in New York who plans to use one of my paintings on a book cover, and there was a rock festival recently in California that used one as a giant backdrop," he says. "I'm also getting more calls for gallery shows in America, so my work is receiving more exposure there now."

I wonder aloud if Saeki is a sex maniac. After all, why does he always paint and draw images filled with sex and death?

"Hmm, why do I?" he asks, pausing for a moment. "I've never really thought about it. I guess I'm just mischievous and like to surprise people. I don't really do art for self-expression. I'm more conscious of the people who see my work. I see it as a form of entertainment. It can't be boring; it must be entertaining. The more I produce the work, the more I want to top myself each time, to shock people even more. I'm not a violent person myself. I don't engage in the morbid acts I depict."