"Fast Food Nation," a stomach-churning critique of the health and labor practices of the burger business, argues that Americans should change their dietary habits. Good luck. 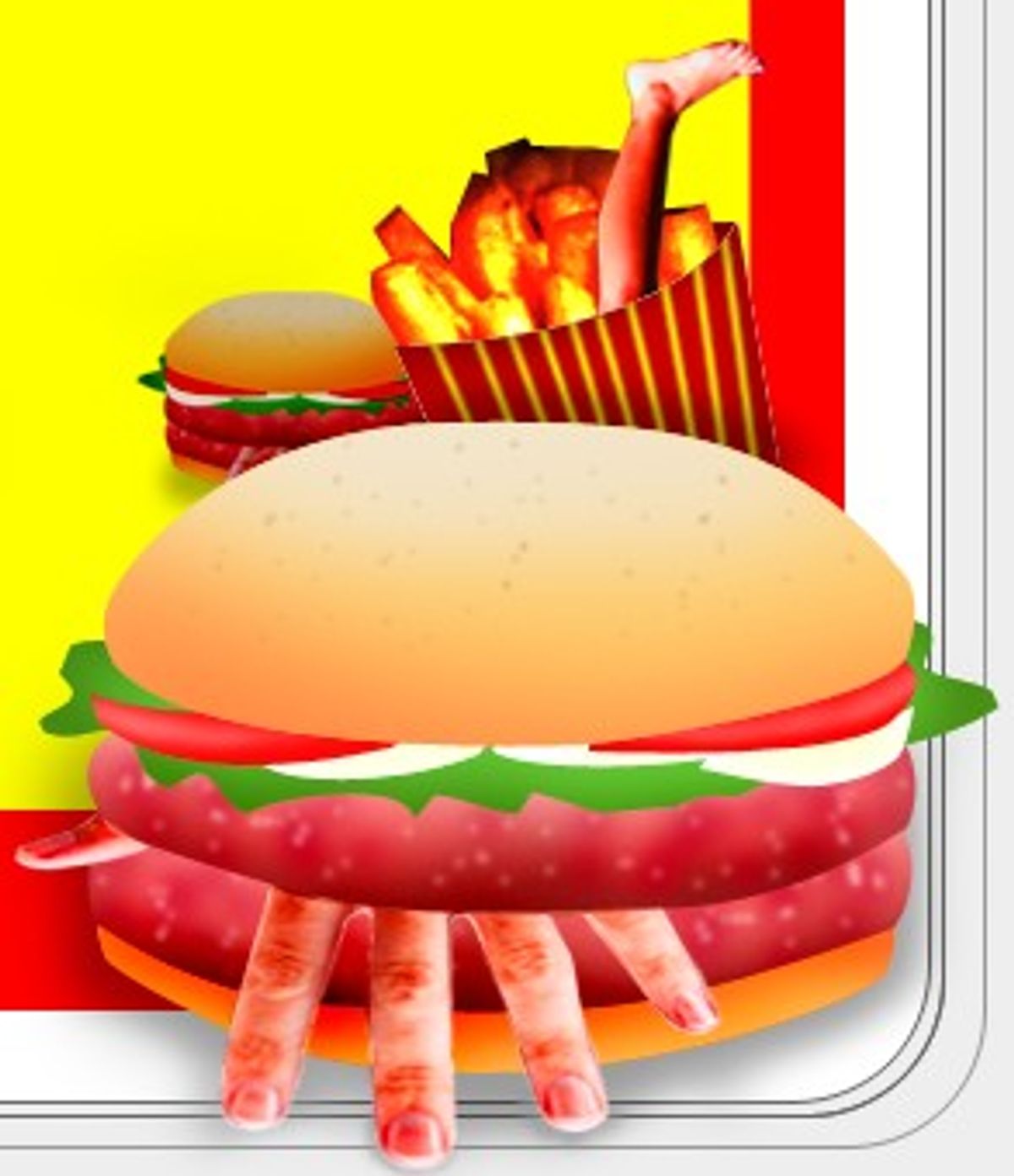 What's in all those hamburgers? They're most likely made from the meat of worn-out dairy cows (generally the least healthy cattle stock), which spend their days packed in feedlots full of pools of manure. Each burger contains parts of dozens or even hundreds of cows, increasing the likelihood that a sick one will spread its pathogens widely.

Until 1997, those cows, by nature designed to be herbivorous, were fed "livestock waste" -- rendered remains of dead sheep and cattle, along with the remains of millions of dead cats and dogs purchased every year from animal shelters. Thank God the law was changed: Now they're fed only the remains of horses, pigs and poultry. And if you think your fries are animal-free, guess again. While McDonald's no longer cooks them in beef tallow, a process that until 1990 gave the chain's french fries more saturated fat per ounce than its burgers, McDonald's still acknowledges that some of the flavor comes from "animal products."

Eric Schlosser, author of "Fast Food Nation," is troubled by our nation's fast-food habit, but what goes into the burgers and fries isn't even half the problem, he says. He admits that most of the fast food he ate while he wrote the book "tasted pretty good." (It should, he notes -- fast-food restaurants rely heavily on the services of the billion-dollar flavor industry, which manufactures and sells the complex chemicals that give distinctive flavors to processed foods such as "smoky" chicken, "strawberry" shakes and even "flame-broiled" burgers.)

The reasons Schlosser sees fast food as a national scourge have more to do with the sheer ubiquity of the stuff -- the way it has infiltrated almost every aspect of our culture, transforming "not only the American diet, but also our landscape, economy, workforce, and popular culture." An estimated one out of every eight workers has at some point been employed by McDonald's, and the nation's 3.5 million fast-food workers are the largest group of minimum-wage earners.

What's more, the values the fast-food industry spreads embody capitalism at its worst: hostility to workers' rights, along with a dehumanizing emphasis on mass production and uniformity at the expense of meaningful worker training and autonomy. At the same time that they invest large sums to design equipment so streamlined that it requires as little skill as possible to operate, fast-food companies accept hundreds of millions of dollars in government subsidies for "training" their workers, through programs intended to reward companies that teach job skills to the poor.

Schlosser also details the fast-food industry's efforts to market directly to kids. He's especially interested in the unholy alliance between McDonald's and Disney, two corporations united not just in their hostility to unions and their quasi-feudal style of dealing with their workers but also in their determination to infiltrate the imaginations of toddlers. Of the two, McDonald's has been the more successful: Ninety-six percent of American children recognize Ronald McDonald. Only Santa Claus rates higher.

In perhaps the most disturbing section of "Fast Food Nation," Schlosser reports on the rise in Colorado of corporate "sponsorships" to cover shortfalls in school districts' budgets: "Whether it's first graders learning to read or teenagers shopping for their first car, we can guarantee an introduction of your product and your company to these students in the traditional setting of the classroom," reads one chilling brochure for a Kids Power Marketing Conference. Fast-food companies are at the leading edge of this new marketing strategy, placing not just hallway ads and banners in schools but also targeted, branded educational materials in classrooms, produced with tax-deductible dollars.

With its far-reaching analysis of a low-grade sickness nibbling at the very entrails of America, "Fast Food Nation" is a jeremiad, but Schlosser never comes off as a "sky is falling" street-corner raver or bullheaded finger-pointer. His fury is evident, but his voice is measured and his methods are subtle. He eschews alarmist adjectives, preferring instead to let his artfully assembled mountain of statistics and damning quotations make its own case. He's obviously arguing from the left and yet he never oozes ideology; he criticizes corporate domination of the cattle industry, for example, by painting portraits of independent ranchers who have been run out of business. "The ranchers most likely to be in financial trouble today," he writes, "are those who live the life and embody the values supposedly at the heart of the American West. They are independent and self-sufficient, cherish their freedom, and believe in hard work -- and are now paying the price."

Schlosser isn't opposed to the concept of fast food per se. He includes examples of fast-food pioneers who marched to their own individualist beat, such as Carl Karcher, the founder of the Carl's Jr. chain. Karcher is no Alice Waters, but his example shows the value of stubborn hard work and honest business practices. Karcher's blindness to the downside of the fast-food revolution in which he played a part seems to come more from a sort of tone-deafness than from greed.

Even in the book's gross-out section on food safety, Schlosser concedes that, so far, the slaughterhouse conditions he documents present no widespread health threat. And the book ends with what can only be called a tribute to In N Out Burger of California, a family-owned chain that has refused to franchise and pays the highest wages in the fast-food industry. In N Out peels its own potatoes and uses fresh beef, and it does without microwaves, heat lamps and freezers. It's ranked first in the nation in food quality, service and atmosphere, and the most expensive thing on the menu costs $2.45.

So what can be done to break the grip that the rest of the fast-food industry has on us? In a brief section titled "What to Do," Schlosser sketches possible remedies. He wants to see some action by government, including a single food safety agency, higher standards for food safety in school cafeterias and a ban on advertising "unhealthy foods to children," which might then cause McDonald's, for example, to lower the fat content of its Happy Meals, and thus make a dent down the road in the trend toward obesity. He also suggests eliminating job-training subsidies for fast-food chains that churn through workers and don't actually help them acquire any skills, as well as "passing new laws to faciliate union organizing" at these chains, which he admits might not lead to widespread unionizing but would encourage the industry to treat workers better.

His final appeal to end the fast-food industry's bid for domination, however, is aimed not at government but at consumers: "Turn and walk out the door," he encourages, the next time you're about to buy fast food.

As a reader -- and an eater -- I'm Schlosser's perfect audience. I consume my share of hamburgers, but rarely at a fast-food chain, unless I'm starving and trapped on Interstate 95. I'm probably as turned off by the nutritional vacuum fast food represents as I am by the specter of automaton minimum-wage staffers reciting their "Would you like to supersize that?" scripts. So why did I get a sinking feeling as this altogether reasonable, well-researched and heartfelt book ended? Why do I doubt that Schlosser will end up changing many minds not already sympathetic to his point, let alone alter much behavior? I think the main problem is Schlosser's appeal to cold, hard reason rather than enlightened appetite.

He's right that it's important to try to change public opinion about acceptable corporate behavior, especially when corporations are using shady practices to control an activity as intimate and as central to our overall well-being as eating. But Schlosser has left out a discussion of what needs to replace all those fast-food meals -- the kinds of fresh foods that would be affordable, accessible and familiar enough to override Americans' daily cravings for fries, burgers and other processed, taste-engineered foods. And he doesn't even approach the question of what it will take for a healthier and more varied way of eating to win over the low-income people who are the captive market for fast food right now.

The improvement of the American diet in this age of rampant obesity is a complicated socioeconomic problem, but it's partly a question of changing tastes, of educating palates -- and making no apologies, regardless of the implied snobbery of the project. Surely, "Let them eat In N Out Double Doubles" can't be the only answer. Schlosser has certainly made his case, and we'd be fools to ignore him. But in the end, I found myself wishing that "Fast Food Nation" had tried to appeal more to the stomach than to the brain.