Exactly what happens when a person leaps off the Golden Gate Bridge? Reading this article is the safest way to find out. 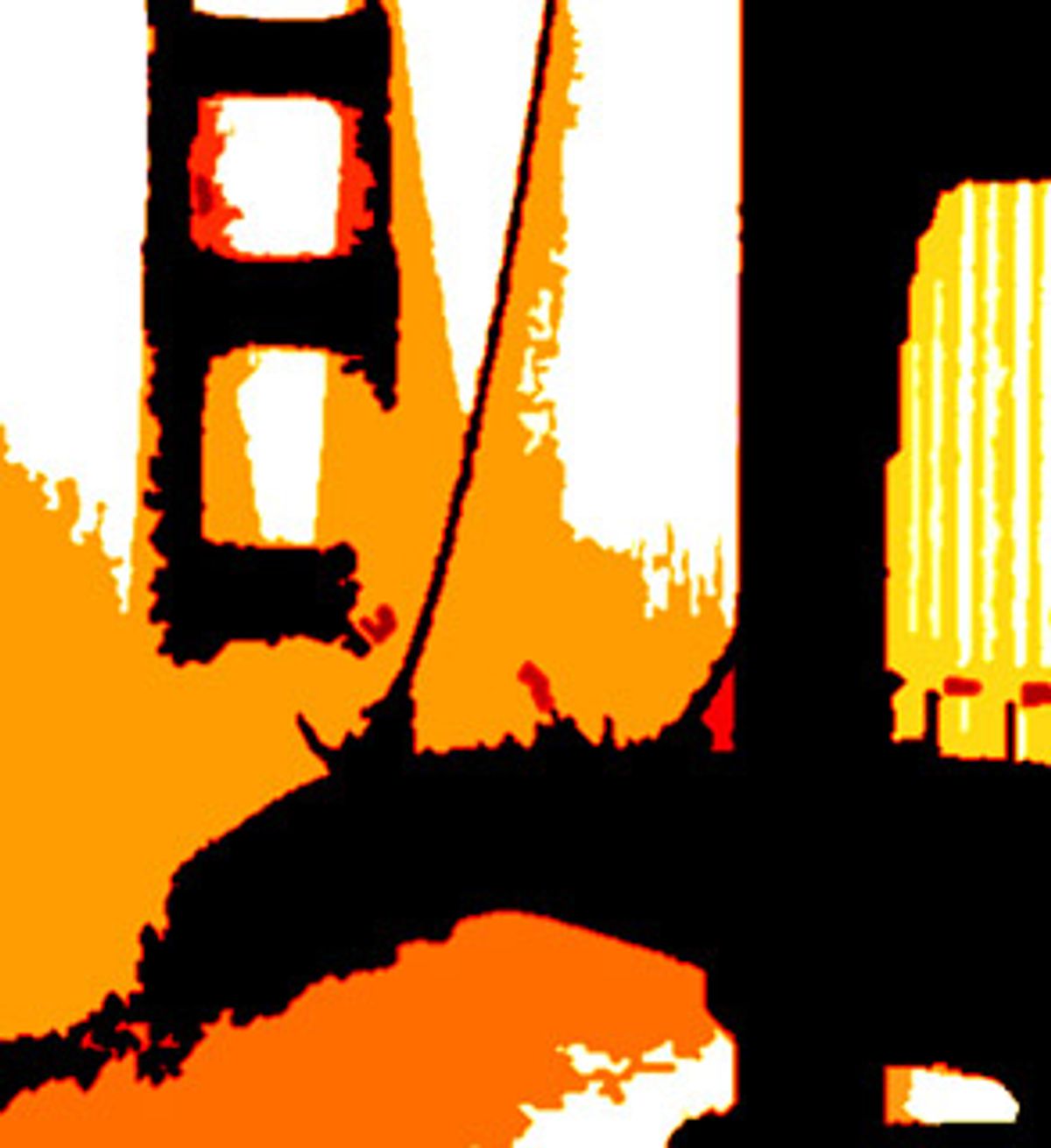 In 1996, I jumped off a 350-foot-high bridge over a river gorge. I wanted to experience what it would be like to leap, head first, from a lethal height and hurtle toward my death. The death part itself I had no interest in experiencing -- in fact, a fairly strong interest in not experiencing -- so I had a bungee cord wrapped around my ankles. After the initial terror and involuntary-scream portion of the event, the fall was quite enjoyable. I didn't flail or rotate helplessly like people pushed from balconies on TV, but dropped smoothly in dive formation. I felt the way, as a child, I imagined Superman feeling. It led me to believe that jumping off San Francisco's Golden Gate Bridge would be a lovely way to go.

I don't feel that way anymore. This I blame on several people, including Gary Erickson, an investigator at the Marin County, Calif., coroner's office, where bodies pulled from the water below the Golden Gate Bridge are taken; Richard Snyder, author of a research paper titled "Fatal Injuries Resulting From Extreme Water Impact"; and Herb Lopez, a Golden Gate Bridge safety patrol sergeant.

In fact, the pointed lack of loveliness involved in a bridge suicide is one of the things Sgt. Lopez uses to dissuade the suicidal individuals he encounters in his job. In response to pressure from San Francisco Suicide Prevention, the Golden Gate Bridge District has safety officers regularly (depending on their workload) patrolling the bridge on scooters and bikes, scanning crowds for possible jumpers. (Unlike tourists, jumpers are usually alone, do not carry cameras and do not look like happy people on vacation.)

Lopez regales would-be suicides with details of has-been suicides he has helped recover. (While the U.S. Coast Guard retrieves bodies that land in open water, bridge personnel are responsible for jumpers who land on the ground or in the concrete-ringed moat that surrounds the bridge's South Tower.) I asked Lopez for a "for instance." He thought for a moment -- I cannot begin to imagine the horrors that flashed through his mind in that moment -- and then he said: "One time Lt. Locati was down on the moat bringing in a body and someone yells, 'Look out, Mike!' He looks down, and right there on the concrete in front of him is a complete human brain. Something sheared off the back of the guy's head."

We were on the South Tower at the time, so Lopez leaned over the railing and pointed out the spot where the brain had sat. A tourist stopped alongside us. "What are we looking at?" he said.

The most recent suicidal individual got to hear about a terminally ill man who landed between two boulders near the shore on the Marin County side of the bridge. "All we could see of him," said Lopez, "was his legs sticking up." He made a peace sign to illustrate the man's legs protruding from between the rocks. "When we put him in the basket to haul him up, he was about this long." Lopez held his hands about a yard apart, as though relating a fishing story, which, in a way, I guess he was.

The basket to which Lopez was referring was a crab basket. In its present incarnation, it, and a grappling hook, are the primary tools used by bridge personnel to haul bodies from the moat. This is not to say that the crab basket does not occasionally still haul crabs. "A lot of times, we pull bodies out with crabs hanging off them," said Lopez. Crabs apparently consider people as much of a delicacy as people consider crabs. "They go for the eyeballs first, then the soft flesh on the cheeks." Lopez possesses the matter-of-factness and healthy remove of people who deal with death as part of their job. He didn't strike me as callous or uncaring, just inured.

When people land on open water, the result is less grisly, though it still falls far short of lovely. "If you look at these people," says Gary Erickson, the Marin County coroner's investigator whose job is to do just that, "they don't look like there's a whole lot wrong with them." Depending on what position they were in when they hit, very few bones may be broken. Bodies that enter the water feet first or lying flat tend to emerge with the skeleton largely intact. Of the 169 Golden Gate Bridge suicides in Snyder's paper, 17 had no fractures at all, and two had no injuries. If you manage to enter the water feet first and close to vertical, it's possible to survive a leap from the bridge. But it's not very likely: At the time of Snyder's paper, the death rate was 99.3 percent. Ironically, according to another of Snyder's papers, suicides are more likely than accidental plungers to survive extreme impacts -- perhaps because they wish to die and are thus more relaxed when they hit.

Usually what kills you is your ribs. According to Snyder's research, 85 percent of the jumpers had broken ribs. (By comparison, only 15 percent emerged with fractured vertebrae, and only a third with arm or leg fractures.) These jagged pieces of rib "macerate," to use Erickson's verb, the heart, lungs and/or major arteries. Of the bodies in Snyder's paper, 76 percent had punctured lungs, and 57 percent had heart or "great vessel" ruptures.

Dying in this manner is akin to death by gunshot or a stab wound to the heart: It's not always instantaneous, but it's very fast. When a major artery is severed, the brain quickly shuts down for lack of oxygen-bearing blood. "When a vessel the size of the carotid artery has been cut wide open," writes Sherwin Nuland, author of "How We Die," "the entire sequence can take less than a minute." One thing is known: It happens fast enough that few people drown. Only 45 of the 169 suicides in Snyder's paper lived long enough to inhale much water.

Out on the bridge, Lopez and I were joined by Mike Locati, the man who nearly slipped on a brain. Locati's patrol that morning had been uneventful. He was keeping his eye on a lone man with no camera who was staring down at the water. I noticed him too, for he glanced back at Lopez and me after we'd passed. He wore no jacket, just a T-shirt and a pair of Wranglers, which, had he decided to leap, would likely have had the crotch blown out and the rear pockets blown off. ("Even on a sturdy pair of denims," Erickson marveled.)

According to Lopez and Locati, there are two types of jumpers -- and only one they can do much about. There are the suicidal people who aren't quite sure they want to jump and who typically walk the bridge several times or climb over the railing to sit on the 4-foot-wide ledge below it, deliberating. "Ninety-five percent of the time, if we get to these people," said Lopez, "we'll get them back over." The more determined suicides are harder to stop. Some people simply stop their car in traffic, get out and jump, stunning tourists -- who typically compose themselves quickly enough to snap photos or shoot video -- and blocking traffic for hours. (Most suicides park in the parking lot, considerate to the end.) Others appear to be out for a stroll and then suddenly turn in midstride and, as Lopez puts it, "take a flying leap over the railing."

The only way to keep people like these from jumping would be to put up fencing, which the Bridge District thinks would spoil the view. And so, 25 or so times a year (there've been more than 1,000 deaths to date), someone jumps. When it happens, bridge personnel call the Coast Guard and then hurl a buoy over the side from the spot where the person jumped. The buoys have the same density as a human body, so that, in theory, they travel in the current just as a body would. Very often, though, depending on the body fat of the jumper and whether any air bubbles are trapped in his or her clothing, the body will have sunk before the Coast Guard can get to it. In this case, it doesn't float to the surface for about a week and a half, after gases from the bacterial decomposition process have inflated it sufficiently. Talk about spoiling the view.