It's in the eyes

That which Dr. Lecter cannot eat, he must love. 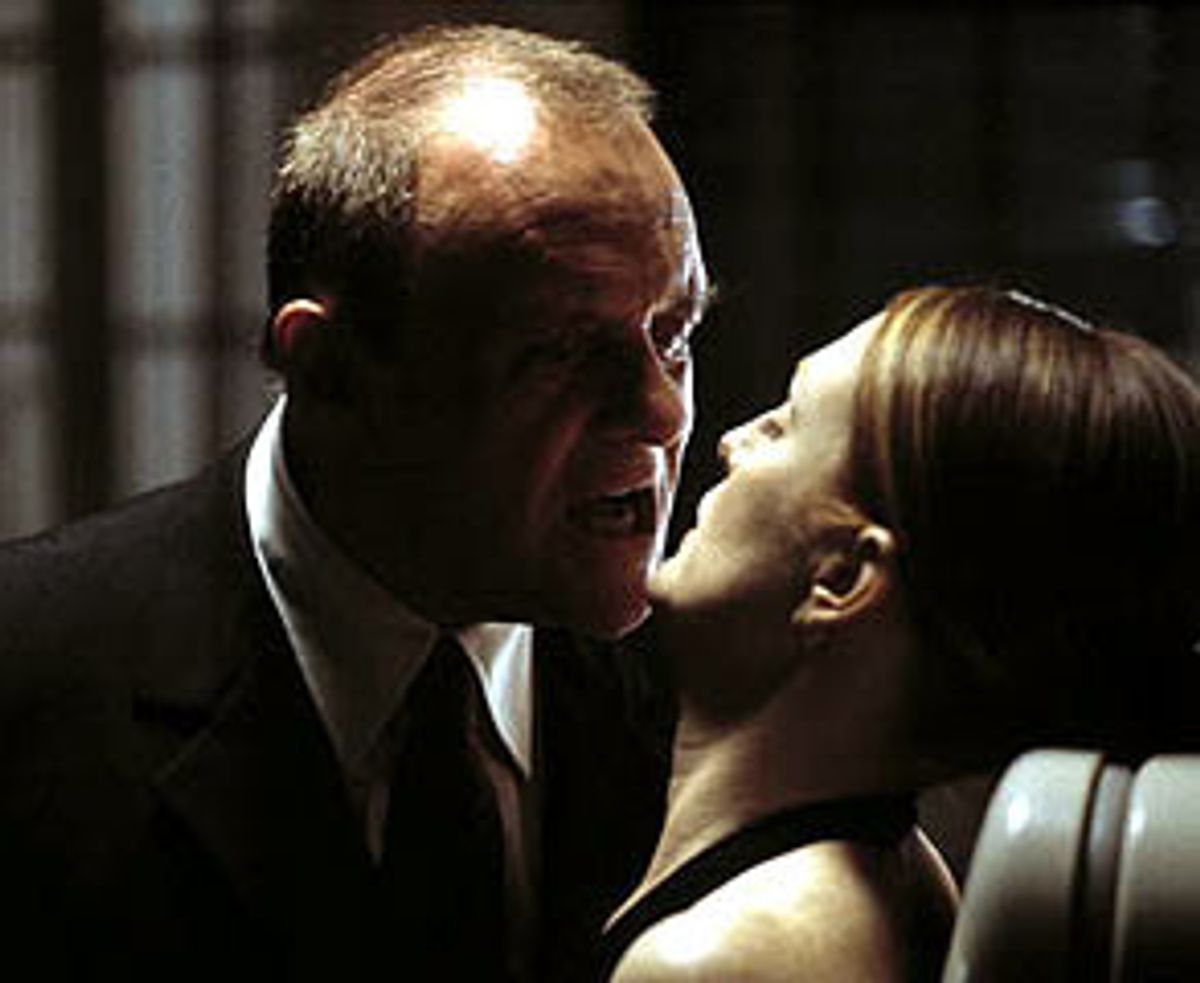 Whenever the people behind movies beg critics not to reveal an ending, we have reason to be suspicious. It's often a way of conceding that the ending (and some endings, apparently, start early on in the movie) is as ridiculous as it is spectacular. So ride the roller coaster, but don't bother believing you're really on it, or that it's going anywhere.

But in the case of "Hannibal" (or, as I call it, "Lecter's Looking at You") I'm ready to make some extra allowance. You see, I rather like the film, and I really like the way Anthony Hopkins' Lecter looks at Clarice.

I know, it's not the same. Clarice is 40 now, and looks it. You feel that Julianne Moore has had a lot of weak, insubstantial men. So she's sexy, but withdrawn and disillusioned. Ten years ago, Jodie Foster was 29, and seemed younger. She seemed like an asexual virgin who didn't know why prisoners could smell her sex. It was her confusion that brought out the fond father in Dr. Lecter.

This time around, with "Hannibal," if you've read the book or heard about it, you're expecting much more. Never mind exactly what you get -- I'm not here to spoil suspense. Let me just say that what made Lecter so fascinating in "The Silence of the Lambs" was the impossible desire, that "I could eat you" pilot light in his eyes. It was the way he surveyed or contemplated Foster, cooked or raw, and knew she was so immaculate she was worthy of the love he had despaired of. After all, why is Lecter such a monster? It's because he's angry that life doesn't meet his very high standards.

And in this film, it's so clear how much they share -- the same dismay at slovenliness, hypocrisy and compromise in others. They are outcast scholars and moralists in their professions. They understand each other.

Thus it is that we see more plainly than before that that which Dr. Lecter cannot eat, he must love. That's what it comes to -- adoration, the urge to be with, to help, to rescue, to respect, to aspire to. His warped saintliness can hardly be debated now. And he is, like all sensual self-deniers, modest, almost chaste. In one really glorious sequence of hide-and-seek, where the sounds of proximity, or intimacy, are as vital as what you see, he closes in on her in a pubic (I meant public) place and, as she stands there, still but turning, trying to place him, he drifts past her on a carousel and lets his hand brush against the fine red flesh of her hair.

Now we know why Moore was adroit casting, for her hair the hue of blood or rare lamb (did you have the lamb?) makes the most secret touch appetizing. Oh, later on, he will carry her, and there is time for one cool kiss, but the chance to feel her hair in passing is both lyrical and barbaric. It is a love scene that reaches from before tenderness to past rape. And yet there is a saving fragrance of humor to it, as if Lecter now were actually directing the film, healing the cuts with thyme and rosemary. You see, the very sharpest thing in this film is to make their love impossible, the imagined meal. Which is the same as infinite.