The life of crime

"CSI" criminalist Gil Grissom relishes fishing bug larvae out of corpse wounds. On PBS's "Touching Evil" it's the detectives who creep and crawl. 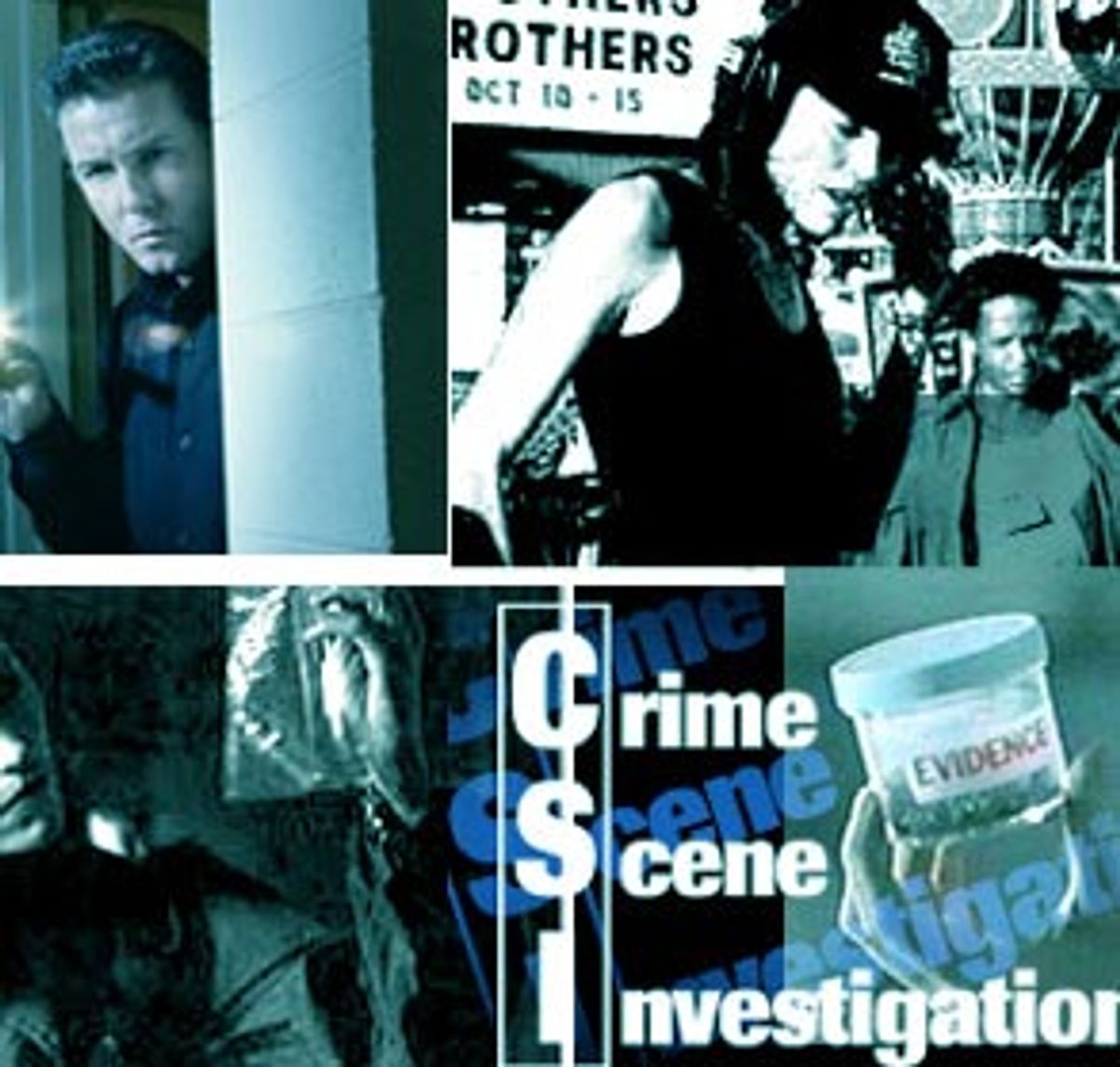 CBS's rookie drama "CSI: Crime Scene Investigation" has a neat, eerie premise. It's about criminalists, the forensics geeks who get called in to gather the sometimes invisible evidence that perps leave behind -- you know, flecks of blood, flakes of skin, size 12 Bruno Magli bloody footprints. Set in Las Vegas, "CSI" follows the efforts of gray-templed veteran criminalist Gil Grissom (William Petersen) and his band of investigators as they work backwards to solve the mysteries of the dead.

"CSI" is a straightforward howdunit with some addictive gimmicks. There are long wordless stretches where we peer over the shoulders of Grissom and his boys and girls as they use all kinds of cool methods and machinery, some gleamingly high-tech, some funky and homegrown, to bring old bloodstains out into the light, dust for prints, determine time of death, reconstruct a face from a skeleton or figure out the trajectory of a bullet. Then there are the surreal, saturated-color sequences where we see the criminalists' theories enacted from the point of view of a bullet or a burning bomb fuse. For puzzle people, mystery fans and those who have a taste for gadgets and whiz-bang, "CSI" was getting to be a nice little Friday night time-passer -- the Sharper Image catalogue of crime shows.

On Feb. 1 though, CBS attached "CSI" to the coattails of "Survivor" and moved it from Fridays to Thursdays at 9 p.m. And while "CSI" has benefited handsomely from the move (the Feb. 1 episode was the fourth most-watched program of the week, according to the Nielsen ratings), the show's modest pleasures are suddenly looking a little too modest in the harsh light of Thursday, the big leagues of network programming.

"CSI" is one of those CBS dramas, like "The Fugitive" or last summer's mob drama "Falcone," that means to be hip and edgy, but doesn't quite have the moves to pull it off. (Still, compared to most of what passes for drama on CBS, "CSI" looks like "The Sopranos.") Since Grissom's squad works the night shift, the writers lay on the seamy atmosphere (gamblers, hookers) with a trowel. But everything feels weirdly generic and sanitized. The hookers are always sweet apple-pie kids with hard luck stories, the hard-core gamblers are central-casting-pathetic, which means they need shaves. "CSI" doesn't have the bite or the wit to do justice to the ripe, weird wonders of Vegas. And the dialogue is so faux hard-boiled it verges on goofiness. "She's stiff like a 2-minute burrito that's only been nuked for 1 minute," Grissom noted in one episode as he inspected a corpse. Or maybe he was just auditioning for "Naked Gun 4."

"CSI" also has a bad case of hokey plotline fever, otherwise known as "Nash Bridges" disease. This is a tragic malady that affects cop shows when the writers can't think of a clever way to help us get to know the characters. Instead, they make every other case personal. In "CSI," we've already had a rookie criminalist murdered in the line of duty, a squad member's ex-husband accused of rape and another squad member suspected of murdering a hooker he'd spent the night with -- and it's only halfway through the first season.

But what really puts "CSI" in danger of becoming a guilty pleasure for all the wrong reasons is that it seems so unaware of how hokey and thin it is. I mean, the characters' names say it all. Grissom (read: "gruesome") is obsessed with cadavers and insects. Grissom's on-the-job rival is the sneering Ecklie, who is both icky and ugly. His boss is named Capt. Brass, which is like naming a priest Father Clergy. Criminalist Catherine Willows (Marg Helgenberger) is a willowy former exotic dancer. Criminalist Sara Sidel (Jorja Fox) is a young protégé Grissom brought in from San Francisco, and she sidles up to Daddy at every opportunity. Then we have the squabbling dudes Warrick Brown (Gary Dourdan) who is, well, brown, and Nick Stokes (George Eads) who is, like, stoked.

Best of all -- or worst, depending on how you feel about shows that are so bad they're good -- is Petersen's full-speed-ahead performance as Grissom. You can see what attracted Petersen to the part; Grissom is larger-than-life, eccentric and always right, even when he's wrong. It's a succulent star turn, and Petersen relishes every morsel.

Grissom has no discernible home life (or, for that matter, a home). He lives for his work. He has his own brew of fingerprint dusting powder. He spends hours painstakingly dismantling dozens of alarm clocks to find the kind of timer used as a detonator in a bomb blast. He considers fishing bug larvae out of wounds on corpses a perk of the job. He can't pass a crossword puzzle left behind on a lunch table without sitting down and finishing it. Grissom is Da Man, and nobody tells him how to do his job, dammit, nobody! "Do you ever worry about professional suicide?" he's asked. "Not when I'm committing it, no," he snaps back in a display of deadpan Grissom wit. At least, I think it's supposed to be wit.

Grissom is boss, mentor, professor and father figure to his brood. And his charging, super-confident, no-nonsense manner recalls another cop show hero who ruled the roost over a flock of law enforcement hatchlings: Gil Grissom is the T.J. Hooker of our time.

The dramatic shortcomings of "CSI" stand out even more if you watched PBS's "Touching Evil, Series Three" on "Mystery!" which got lost in the over-hyped CBS-NBC Thursday night gladiator competition. The "Touching Evil" stories (the first two series are available on video, and some PBS affiliates are still running the four-part "Series Three") are so creepy, they make "CSI" look like a kiddie carnival funhouse.

Created for British TV by Paul Abbott (he also did the British import "Cracker"), "Touching Evil" is a dark and disturbing character study in the guise of a cop show. Detective Dave Creegan (the electric-blue-eyed Robson Green) is one messed up soul. Shot in the head in the line of duty, he returned from his near-death experience with a scar on his forehead and a case of the heebie-jeebies that nothing except a brisk walk on the wild side can temper.

Creegan is now a member of the elite Organized and Serial Crime Unit (a fictional British equivalent to the FBI), but he doesn't quite fit in. He's got a nasty temper, he's aloof and arrogant and his ability to get inside the heads of bad people makes his colleagues really, really nervous. But under it all, as his starched yet understanding superior officer Susan Taylor (Nicola Walker) can plainly see, he's as vulnerable as a little boy. Bad things keep happening to Creegan: His marriage failed because of his work; his girlfriend was murdered by a serial killer he was tracking; he had a nervous breakdown; he came back to work just in time for a squadmate to be murdered by a different serial killer; and, in the most recent episode (spoiler alert!), he was set on fire by yet another serial killer.

OK, I know this sounds preposterous, and some of it is. And, yes, "Touching Evil" would seem to fall into the same "this time, it's personal" trap as "CSI." But there's a difference. Everything is personal for Creegan -- he brings it upon himself. He's hooked on pain and despair. He can't quit his job, because he has nothing else. He's a bona fide head case. He's also the latest in a long line of fascinatingly conflicted TV cops (Vinnie on "Wiseguy," Sonny on "Miami Vice," Bayliss and Kellerman on "Homicide") who can imagine things from the bad guys' point of view a little too vividly. Green's haunted performance conveys a sadness that's almost too sharp to bear. He's the loneliest cop on the beat.