Are blacks unhappy with Dems?

California Rep. Maxine Waters sure says so, warning black supporters of the new DNC chief: "Don't ever enter into a room to provide a shield for a white man against a black man." 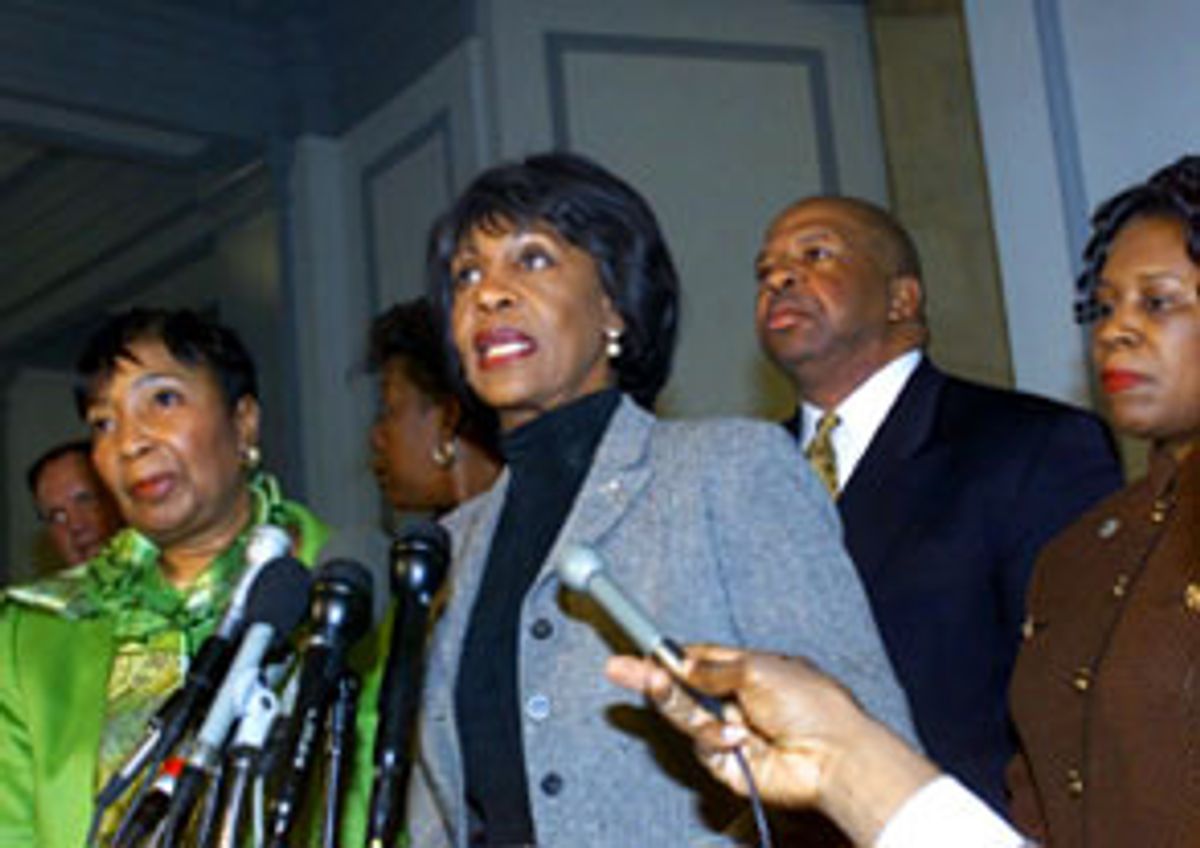 Some Democrats raised objections when Clinton buddy Terry McAuliffe assumed the chairmanship of the Democratic National Committee late last week. One of them was Rep. Maxine Waters, D-Calif., who had supported former Atlanta Mayor Maynard Jackson, a fellow African-American, for the post. McAuliffe won, but not before locking horns with the formidable Waters.

Last Saturday, she came fresh from the fight to give a blow-by-blow replay of the battle to over 3,000 African-Americans gathered for the State of the Black Union symposium held by Black Entertainment Television newsman Tavis Smiley and black radio giant Tom Joyner.

"The Democratic Party decided to anoint a new head of the party, Terry McAuliffe, somebody who's never been in public policy," she said. "We found out at the last minute. Literally, it was told to us in a conference call after we had heard it on CNN." Waters also complained about how McAuliffe treated her and other black leaders when they asked to meet with him about his contest with Jackson.

"When we sat down to negotiate, Terry McAuliffe brought in the room with him six black people, and he said, 'Well, I can't talk to you. I'll let my supporters speak for me,'" she began. "And his supporters started to speak for him to tell -- to tell! -- Maynard Jackson why he was unacceptable -- black folks! -- why he was unacceptable to them, and tried to say that somehow his coming in ... would help to limit their power."

By this time, members of the audience joined Waters' indignant display, punctuating her words with disapproving hoots. "We had to tell them, 'You ain't got no power. You don't have any power. And to be used like you're being used is shameful, disgraceful, unconscionable,'" she said. Eventually, Waters said she and her allies were able to wrangle a post for Jackson as national development chairman of the DNC. Later she explained to the cheering crowd one lesson they should take from the incident: "Don't ever enter into a room to provide a shield for a white man against a black man."

Alice Huffman, former vice chair of the DNC's African-American Caucus, drew a different lesson: Some politicians aren't above grandstanding for a headline. She was among the black Democrats who supported McAuliffe at the meeting Waters had talked about, but she had a vastly different memory of the encounter.

"When we walked in, she said, 'You brought in all these black people,'" she recalled. "We laughed out loud," Huffman said, because the group was racially mixed. By Huffman's account, the negotiations went downhill from there.

According to Huffman, when McAuliffe was about to be voted in, Waters brought in reinforcements. "At least 75 people who just came out of the air came in the room and started screaming and chanting," Huffman said. "So when it came time for the vote, most of the Black Caucus people were so upset with the screaming that they just walked out."

As for the development job for Jackson, Huffman said Waters exaggerated her role in securing it and that McAuliffe's black supporters did much of the legwork. "Since Maynard was an icon in our community, it was our idea to reach out to him," she said. Giving Jackson the post had the secondary effect, Huffman claims, of reducing Waters' rhetorical ammunition. "If he didn't get that job, she would be screaming a different story today about how the Democratic Party disenfranchised blacks."

Two days after her speech at the State of the Black Union, Waters herself chuckled about some of what she had said at the gathering, particularly her comment that blacks shouldn't let whites use them as shields. "What I was really trying to do is give a lesson about power," she said. "You should not be used to continue to block the problems of leadership that makes a decision that's not in the best interest of all the people."

Kimberlin Love, a spokesperson for the DNC, said that there was no rift among the DNC's black leaders and that the incident shouldn't be blown out of proportion. "We want to put this behind us. With George Bush in office, we all have bigger things to worry about," Love said. "Unfortunately, there is one side of the story out there, and the only one out there perpetuating it is Maxine."

John Anderson, a deputy director of the Democratic Party of Georgia and spokesman for Jackson, had little to say about Waters' remarks or the McAuliffe encounter, except that there were no hard feelings about the negotiations, and that the DNC's top priority was defeating Republicans. "There's not much more I can tell you," he said.