After a big debut, ratings for the "smashmouth" football league tank. 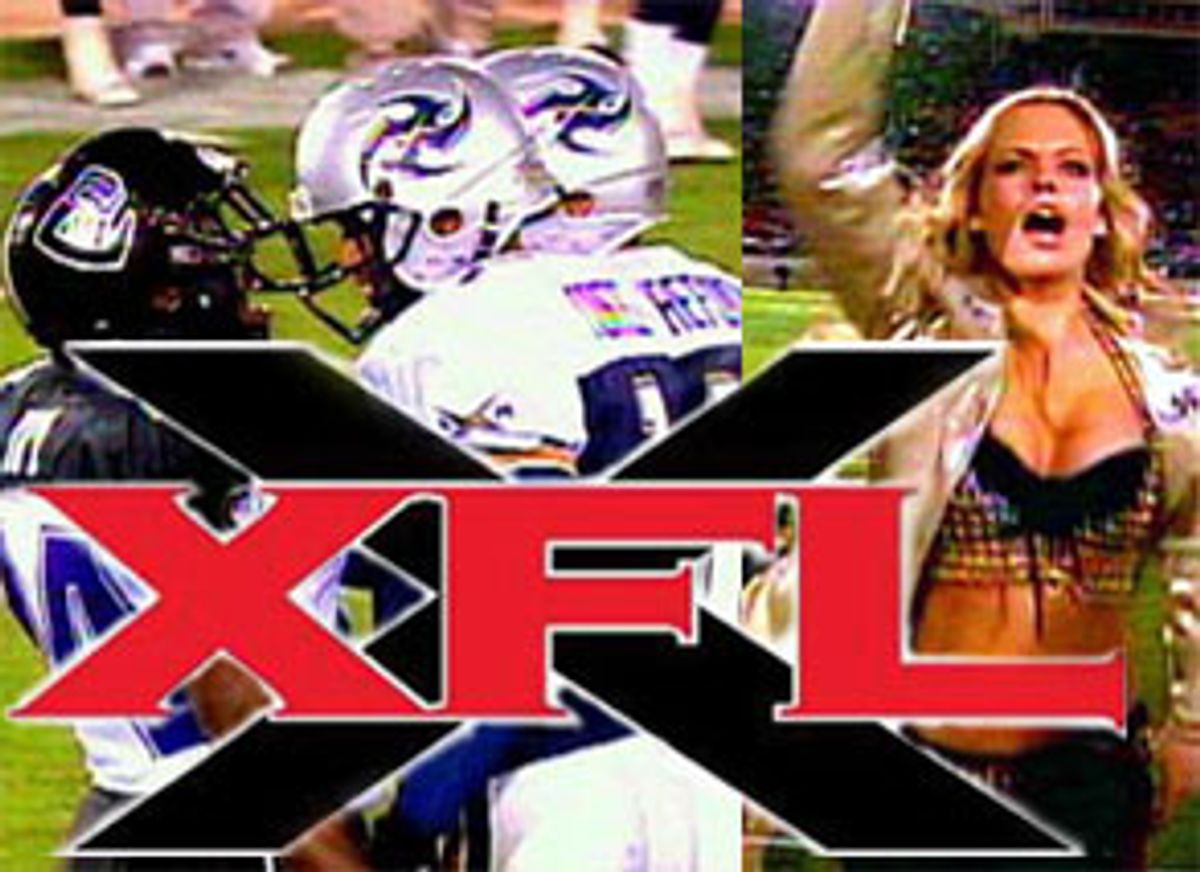 That sound you hear may be the air going out of the XFL's signature black and red football.

The renegade start-up football league, backed by World Wrestling Federation impresario Vince McMahon and NBC, startled the television industry when its Feb. 4 debut telecast garnered a 10 rating, nearly double what NBC had promised advertisers. Based on that showing alone, the press dubbed the so-called smashmouth league a hit and toasted McMahon as a marketing king with a golden touch.

Ratings for the XFL's Week 2 game between the Los Angeles Xtreme and the Chicago Enforcers are in; they show that more than half the viewers who tuned in for the debut didn't bother setting their dials for Saturday night. A decrease was anticipated as curiosity seekers turned elsewhere after the wildly hyped debut, but the size of the drop-off raises eyebrows.

If NBC can't stem the tide, suddenly the XFL's future does not look so bright.

According to Nielsen, the XFL captured a 4.8 rating Saturday night. (A ratings point is roughly equal to a million households.) That 4.8 is still above the 4.5 rating the network guaranteed advertisers, but just barely. The question is whether viewership has bottomed out yet. Will more erosion take place during Week 3? The answer has implications beyond the future of the new football league; a network's entire Saturday night programming is dependent on it.

Broadcast execs predicted that the XFL would help pump up the rest of the night for NBC. But Saturday night, NBC finished last among the four networks -- this during the crucial February sweeps period.

During NBC's first XFL telecast, the show rated as high as 13 during its first half-hour; but each half-hour after that, viewers fled. By its last half-hour the game was down to an 8 rating. On Saturday, Week 2, the same phenomenon repeated itself, although less dramatically.

Meanwhile, the all-important male teen viewers, a group that does not traditionally stay home on Saturday night to watch TV, deserted the league, with two-thirds of those viewers from the first week AWOL for the second.

The XFL did catch a break when the Los Angeles Xtreme rallied late in the game to send it to overtime, which pulled in some more viewers. That, and the fact that the game picked up additional viewers who were tuning in at 11 p.m. for local news, saved the game from getting even lower ratings.

Saturday night's game on NBC lacked the pop and excitement that made the XFL's debut a must-see. The game was played in the cavernous Los Angeles Coliseum, which seats nearly 100,000. But attendance was announced as 35,000. That was roughly the same number of fans who attended the XFL's debut game in Las Vegas, but that contest filled the Las Vegas venue to the rafters. Inside the Coliseum, XFL fans seemed subdued and often bored.

By the time the Xtreme staged their fourth-quarter comeback, a large chunk of those 35,000 fans had already headed for the exits. NBC cameras were left to scan a sea of empty seats -- not exactly the image the XFL wanted to project.

The league also broadcasts a Sunday game on the TNN cable channel. Things didn't get any better there; by the end of the New York/New Jersey Hitmen's home game against the Birmingham Bolt, just 6,000 fans remained at bitterly cold Giants Stadium, which seats roughly 60,000.

The only remarkable performances of the night were by the show's announcers, Minnesota Gov. Jesse Ventura and WWF TV veteran Jim Ross. The pair managed to include plugs for the league in virtually every sentence they uttered over the game's three-hour-plus broadcast time.

There were also technical glitches. A problem with one of NBC's generators scuttled the league's broadcast of the first half of the Los Angeles game. Viewers were switched to the backup contest in Orlando, Fla., but not before watching an on-screen XFL logo for nearly a minute and a half.

Meanwhile, the XFL, with its constant stream of cross-promotion, was supposed to pump up viewership for NBC's late-night anchor, "Saturday Night Live." But despite the XFL's promise to be a faster-paced game, its first two NBC telecasts both ran past their scheduled 11 p.m. end.

NBC's local affiliates need a half-hour for news after the XFL and before the start of "SNL" -- and since those shows are cash cows for local station owners, they are not candidates for shortening just to make sure "SNL" starts on time.