Bring back the bomb!

Nuclear paranoia fit perfectly with my adolescence in the '80s. Then one day, while I was writhing in the gutter, it simply stopped. 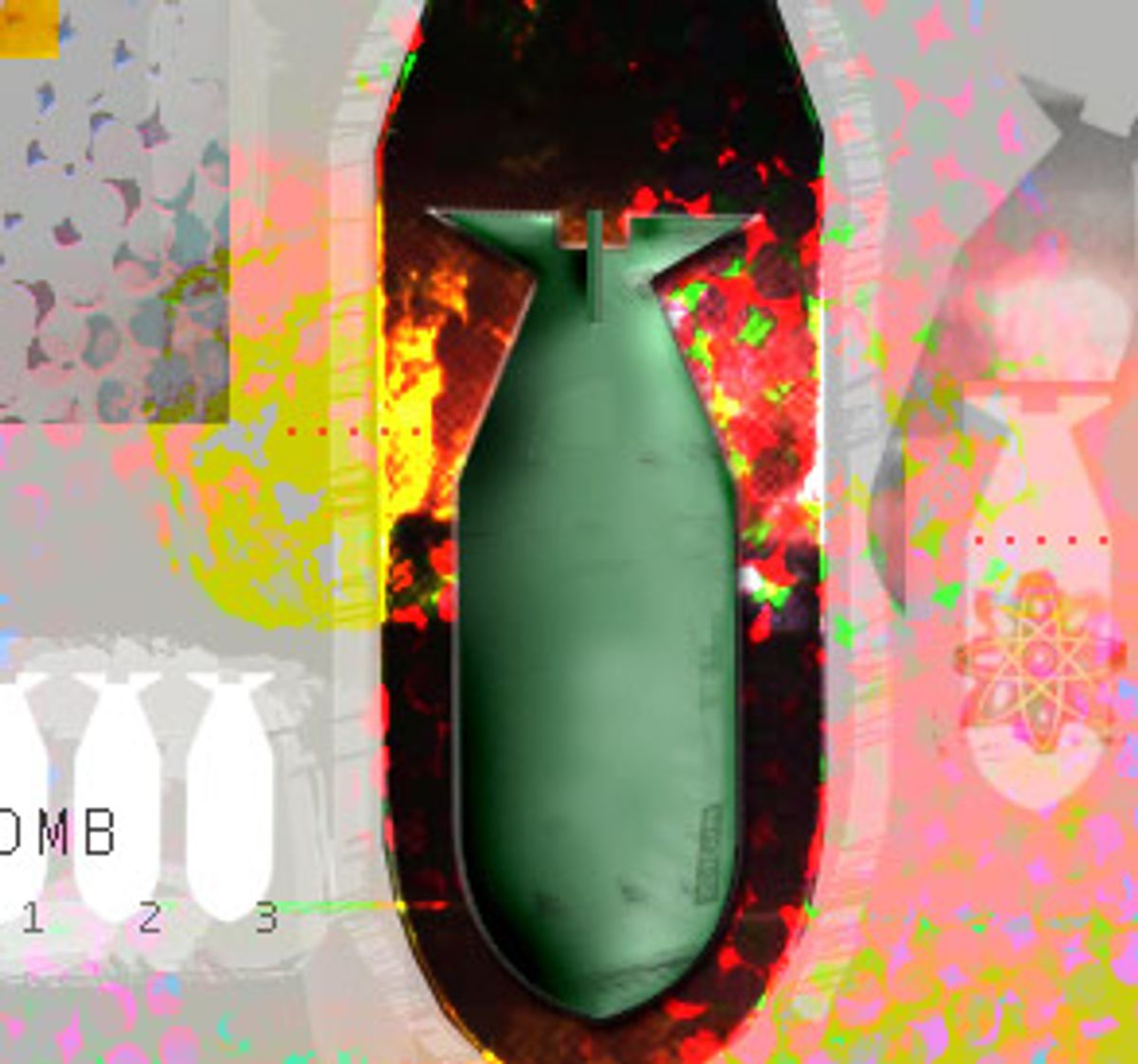 Dread was delicious. It arrived when I was about 12, a suburban kid living outside Baltimore. It was the early 1980s, and the scene unfolding was not a good one. My parents had bitterly divorced. The country was in a recession and Ronald Reagan was in office. John Lennon was murdered, the pope shot, Egypt's Anwar Sadat assassinated. I quit the Girl Scouts.

I was tired, mostly of trudging to the mall to watch bad teen movies. I asked my mom if we could possibly move to a more exciting place. I was too old to play with my kid brother, was too young to date and yawned when I thought of my friends. Thus began a predictably long phase of staying up late, burning candles and listening to dreary records. I also discovered paranoia, and made it my motif.

I vaguely knew about the nuclear thing. Pennsylvania's Three Mile Island nuclear accident had occurred a few years earlier, and Maryland residents worried about living downwind and downstream. In school we learned that the Soviet Union was bad. The children there had to wear uniforms and study all the time, plus work in the fields and factories because their bland, cold and sinister country wanted to take over the world. And "The Day After," a made-for-TV movie that dramatized the effects of a nuclear missile attack on a Kansas town, was about to air.

The movie generated enormous controversy in 1983. No network had ever attempted to bring the horror of nuclear war to America's living rooms, much less during sweeps week. Critics warned that it was relentlessly depressing and deeply disturbing -- two punishing prime-time hours of Hiroshima in the Heartland. The network warned parents that impressionable young viewers should not see the movie, which included graphic sequences of mass death and destruction.

I demanded to be allowed to watch it. Nuclear war and radiation poisoning sounded very grown-up. I was ready to have a ringside seat to Armageddon and all of its secrets. If we were going to be blown up, I argued, I should be prepared. I even had a holocaust-appropriate wardrobe: black sweaters and old Army fatigues.

I don't remember actually sitting down to watch the Sunday night special in our house. But I vividly remember certain scenes, images that immediately seared into my psyche. When the nuclear missiles hit, wind and flames engulfed the region. The rolling Kansas prairie charred to black soot and became littered with the corpses of cows and horses. An entire kindergarten class vaporized during a bright orange blast of fire, instantly turning to skeletons. Green and hairless people with boils on their faces staggered Quasimodo-like along a desolate road in search of food. Jason Robards cried in the rubble. As the credits rolled, a weak call for help came from a basement bunker on a radio. "This is Lawrence, Kan. Is anybody out there? Anybody at all?"

Nearly 100 million people watched the movie. We talked about it in social studies class the next day, and some students delighted in sharing their nightmares, or acting really freaked out. The day after "The Day After" was high drama in junior high -- being traumatized was all the rage.

The timing was impeccable. The idea of a nuclear attack blended perfectly with adolescence, with acne explosions and hormone blitzes. Nuclear holocaust was so Gothic, and the '80s were a Gothic time -- Siouxsie and the Banshees, Joy Division, the Cure. I reveled in the fatalistic pessimism of it all, fetishized being blown to smithereens. "What's the point of doing homework?" I'd whine. "We're just going to die of radiation sickness." Even better, my father was politically conservative, a former Air Force pilot who flew for the National Guard on weekends. What better way to rebel against him than to screech about the nuclear peril? Wallowing was performance art. At last, teen angst had real teeth.

Nuclear issues stayed on the front burner as the '80s marched on. Massive protests against the Pershing II missiles erupted all over Europe. The Chernobyl explosion in 1986 eclipsed memories of Three Mile Island. When it snowed, I imagined that the wet crystal flakes were really particles of radiation, infecting my lungs and skin. Johns Hopkins University's Applied Physics Lab, near Baltimore, became a favorite target of peace groups opposed to nuclear testing. Baltimore had become a hub of activity: Philip Berrigan, the radical Roman Catholic priest and longtime antiwar activist who I thought was so cool because he'd broken into a nuclear weapons plant and poured animal blood on all the warheads, was on the scene when he was not in prison. Berrigan, bullhorns, banners, black boots: Who could resist?

By high school, I was deadly serious. It drove my father crazy. There was a lot of talk then about the Strategic Defense Initiative -- aka Star Wars. My father thought it was a sound policy. I screamed that it was going to start a nuclear war, not prevent one. I was not alone. By then all the cute, hip punk-rock boys were involved in SSR, or Students for Social Responsibility, which was based at Sidwell Friends, the arty Quaker private school in the city. The Quaker parents were in groups like Physicians for Social Responsibility and they spawned progressive children. SSR was tremendous fun. Our rock shows in church basements had anti-nuke or Amnesty International tables set up beyond the mosh pit, displaying fliers and buttons, and I was the girl sitting at the table.

One day I cut school to attend a "die-in" in Washington. The flier had urged people to "Paralyze the Star Wars Nerve Center in Brainwashington." I took the train and met up with various comrades at a downtown government building where Star Wars research took place. There were cops and clubs and paddy wagons and bureaucrats in suits walking to their offices. About a hundred of us met on the street, all dressed in black. Some wore skeleton masks. It was my first true taste of guerrilla street theater. Some people had even taken a bus down from New York.

In unison, we chanted backward from 10, as if a nuclear missile had been launched and was headed our way. At zero, we fell as one massive organism to the pavement, writhing and screaming in agony as the downtown lunchtime crowd looked on. We curled into fetal balls and rolled in the gutters, got gravel in our hair, scraped our jeans on the sidewalks, did our best convulsion routines. It was exhilarating, more marvelous than any tantrum I'd thrown in drama club. I clutched my eyes with trembling hands and rolled all over the street, screaming that the nuclear bomb had burned through my retinas: "I CAN'T SEE I CAN'T SEE I CAN'T SEE I CAN'T SEE."

My voice was hoarse. I desperately hoped that I would get arrested, but the cops nabbed the ringleaders instead. When it was all over some people marched to the lobby of the State Department to do it again. My rush was so high that I thought I would die of excitement. My friend Sondra and I went to the park to chain-smoke instead. It was the beginning of the end.

By the time I graduated from high school in 1989, my interest had begun to wane. The Berlin Wall fell that fall, during my freshman year of college, and the Cold War had lost much of its glamour. A host of other social issues competed for the attention of middle-class liberals: abortion rights, homelessness, Contras and Sandinistas, forest logging, endangered whales.

I still believed in the progressive struggle, and dutifully went to marches and rallies, but the wonderful hysteria was gone. During the Gulf War, random demonstration stragglers slept on the floor of our apartment. Still, it was never quite as fun as the first time around. There was never another die-in. Was it just that I was older, or did the sheer number of different causes disperse the fervor in too many directions? Maybe cynicism warrants its own long phase, and comes on the heels of screaming from the sidewalk.

When I talk to teenagers today, many do seem to care about social issues. But they are scared of large corporations, not the prospect of their own demise. They don't imagine or even celebrate the possibilities of being killed; the optimism about their own future is almost charming. When you're afraid of the Gap rather than the bomb, Starbucks rather than Star Wars, you're unlikely to find yourself writhing on the street, convulsing in mock pain. Each generation will wax nostalgic for the way it once expressed itself, from sit-ins to die-ins to rappelling off Seattle's Space Needle.

Paranoia is no longer my raison d'être; it has been replaced by studied sarcasm. But I can't imagine a better swan song than beautiful, screaming death agony in the gutter of my adolescence.

Dana Hull lives in Oakland, Calif., and is a writer for the San Jose Mercury News.