The color of love

He was a white teacher accused of racism. I was the black reporter on his case. We broke all the rules. 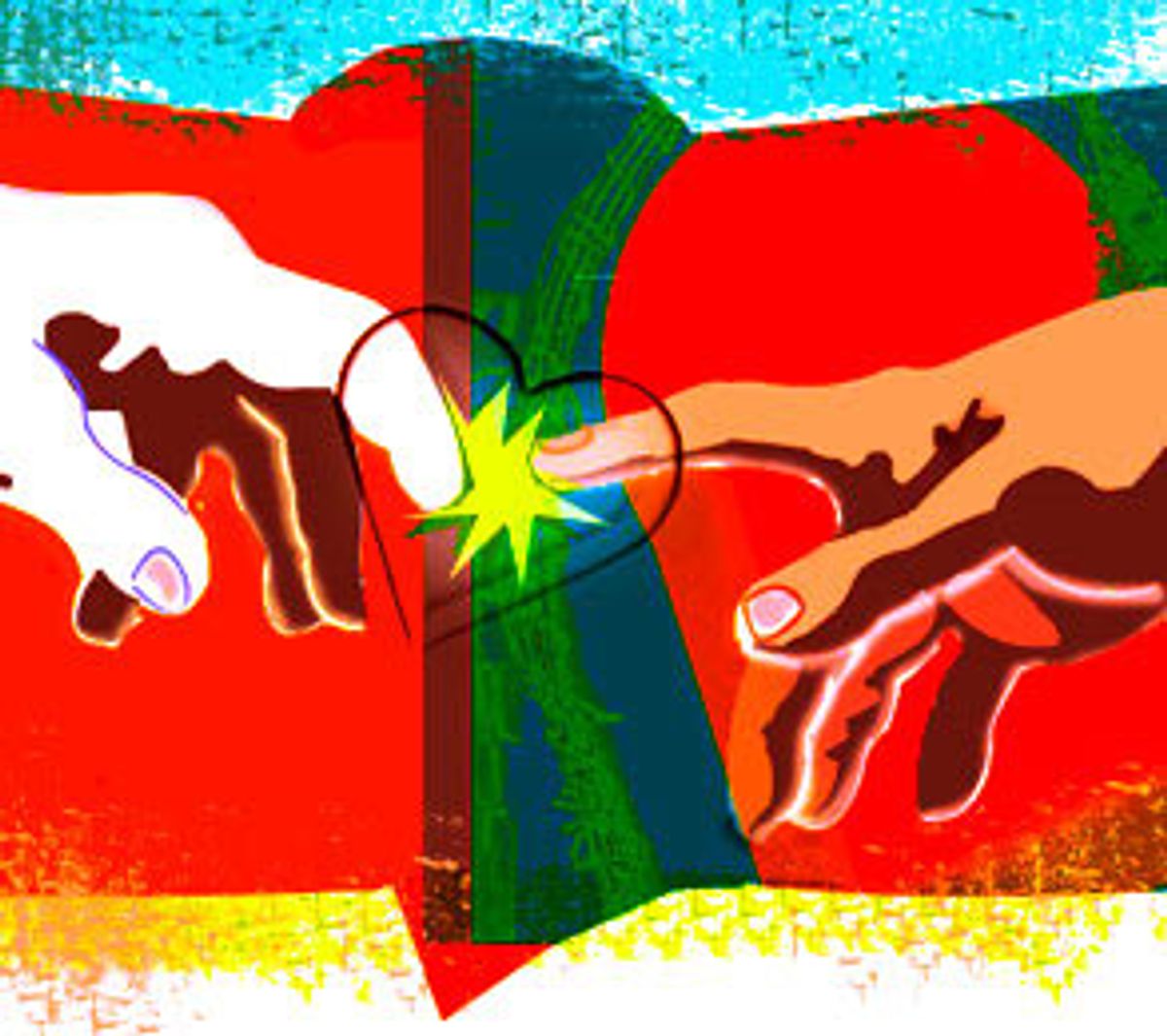 Two years ago, if anyone had asked, I would have said that I would probably never marry. I had nothing against the institution, but by my middle 30s I had come to believe that the marriage I'd always imagined might never happen. I didn't find this tragic; I found it liberating. Not getting married meant absolution from a number of entanglements I could do without -- a deadwood relationship, compromised living space, the halfhearted internal debate about whether to have babies. While I embraced the idea of marriage, I embraced solitude in equal measure. I found a certain elation in the prospect of a future in which I could allow my emotions and shoe-buying impulses to run free. At age 37, my desire for freedom seemed to have neatly trumped my yearning for anything, or anyone, else. And that was fine with me.

In this rare state of contentment, I met Alan Kaplan, who was 43 and in a state of extreme discontent. We met at his house on a Sunday afternoon, though he didn't want to meet me at all, let alone on a weekend. He was a white public high school teacher who had become the epicenter of a racially charged controversy at his campus. Because I am a journalist with a particular interest in matters of racial justice, I had been enlisted by an irate group of black parents at the school, and subsequently by my paper, to do a story about it.

According to the parents pushing the story, Kaplan was guilty of racial impertinence. (These parents hoped that, as a black woman, I would be sympathetic to their viewpoint.) They said he was intellectually arrogant in a white-privilege sort of way, eager to overwhelm his black students' frail sense of self-esteem by, among other things, extending the discussion of slavery to issues of latter-day segregation in his classroom. Kaplan insisted that the system failed black and white students alike, and asked his students to confront the racial achievement gap in his classroom and to question why teachers have different sets of expectations for black and white students.

The parents felt that identifying latter-day segregation was not his business or his purview. According to them, Kaplan's insistence that he was only trying to do the right thing was merely a cover for the fact that he was improperly fixated on race -- he had issued himself a street-gang name, K-Dawg, and even dated black women. "You knowthe type," the leader of the parent group said meaningfully, and a bit wearily.

I did. This also was not the first I'd heard of Kaplan or his exploits: My younger sister, Heather, had been his student in the '80s and had complained regularly about his intransigence. Many of her complaints, I vaguely recalled, had to do with race. Heather's an attorney now, and when I asked her whether she thought Kaplan had been racist she argued vehemently with herself for about 10 minutes before giving something of an answer.

"He was harder on black students than on other students," she said. "He definitely had issues about race and he wasn't always diplomatic about expressing them. And he'd get mad with me because he felt I was squandering my potential, not living up to myself. I don't think thatwas racist per se."

I thought of all this as I rang Kaplan's doorbell one Sunday in April. Yet I was more than willing to get his side of the story. I was also intrigued: What sort of white man would keep pushing the racial envelope in this day and age? He was either exceedingly honest or exceedingly boorish, or both. In spite of everything, I had liked his voice on the phone when we talked to arrange this visit -- rough-edged, with the nearly unconscious authority of a veteran teacher, but younger than I had expected. He didn't bother to hide his uncertainty.

"I must tell you, I'm very reticent about seeing you," he said, already sounding regretful. I gave him my usual pledge of open-mindedness and then said we had to meet right away, as I was on deadline. Sunday, at his place? I heard a startled silence and prayed I hadn't pushed too far -- without him, there wasn't much of a story. "All right," he said. "Do you take cream in your coffee?"

It turned out to be the powdered stuff, which I don't really take but took because he gave it to me. I sat on the floor of his tiny living room because he had no coffee table and I preferred the floor as a writing surface. Kaplan was dressed in jeans and an old T-shirt. He had the resigned look of a man headed for the gallows. He was nothing like the odd, obsessive recluse I'd imagined, the sort who would erect a wall of racial self-righteousness around himself and loudly proclaim himself to be K-Dawg. Instead, he had tousled brown hair, a graying goatee and sad eyes that nonetheless burned bright and curious: He wanted to see exactly how his death would unfold.

I stayed at Kaplan's house for nearly five hours. Talking to him was terribly easy. He had a native charm that was rooted not in assurance but in attentiveness and honesty, even as he detailed the ugliest moments in his ongoing battles with nervous parents and administrators who objected to his teaching style and his determination to impart the hard lessons of race in American history. (As for the moniker K-Dawg, he said one student had given it to him as a kind of joke, because despite being very familiar with racial issues, Kaplan was as unhip -- and un-hip-hop -- as they come.)

He sat on the floor opposite me and offered more powdered cream and I said yes. Nearly three hours into our interview, he asked if I was hungry. Did I want dinner? It was my turn to hesitate and his turn to look abashed, afraid that he had overstepped his boundaries. "Dinner?" I asked, pretending to mull it over. "That'd be good."

He gave me a place setting, salad and lasagna that he'd heated up in a microwave. He didn't eat because he didn't have any more, I learned later. I also learned that 364 days out of the year, Kaplan, a quintessential bachelor, never had anything to eat in the house. His refrigerator typically contained nothing more than a couple of jugs of ice water and a pack of batteries; and he used the stove so infrequently that he'd had it turned off several months before my visit.

We sat at his dining table, and the climate between us shifted as the sun shifted and day lengthened into early night. He leaned forward on the table with his hands clasped tightly together, as if in prayer or anticipation. I noted that he smelled faintly woodsy, that he wore a diving watch and no other jewelry, that the fluorescent light above the table revealed his eyes to be perhaps more green than brown.

He cocked his head and furrowed his brow in mock gravity and asked me about myself: How did I get started as a writer? How was my sister doing? Did I work out? "Nice arms," he said as decidedly as he had said anything all day. He didn't look abashed now. I thanked him, feeling inexplicably delighted, because I didn't work out at all and knew somehow that he knew that.

As a reporter, I was somewhat used to this kind of intimate rapport. He was trying to save his skin, and I must say I have always been prone to falling in love with my subjects -- for an hour, or a day or two at most -- taking the prolonged conversations and forced intimacy to heart before writing a story that either favored them or did not, and then filing it all away in my professional memory.

I welcomed such encounters because they stood in -- briefly -- for genuine love and connection. I could believe what I wanted about my subjects in my mind's eye, without ever crossing a line or committing my prejudice to paper. My professional encounters serviced my romantic ideals, illuminating them briefly, sometimes even brilliantly, before I moved on.

In such a context, I could allow that Alan Kaplan was sweet, affecting, a perfect gentleman, a wonderful listener, good-looking even. If he was a villain, I could still give him the due afforded by my writer's license and the vast but inconsequential space between interview and story.

At 10 p.m., he walked me out to my car and stood at the curb, waving until I was out of sight. I felt less like I'd had an interview and more like I'd been on a date.

I'm still trying to sort out what happened next, though admittedly, I'm not trying very hard. The skeletal sequence of events goes something like this: Kaplan and I talked some more; I interviewed more people, wrote a story in the span of about five days and published it. The story sympathized with the racial inequities in public education, but disagreed with the black parents' indictment of Kaplan. I never heard from them again.

Kaplan and I never stopped hearing from each other. He showed up at my door, unannounced, with flowers, a thank-you for the story, he said. I got more flowers. We began meeting regularly on weeknights at a coffeehouse to unofficially confirm that we had to keep meeting. We talked on the phone one night from midnight to 6 without saying anything of consequence, hanging up bleary-eyed but completely bewitched by the fact that we had staggered through the strangest and most intimate hours of the night together.

His eyes began looking less sorrowful and more hopeful. He talked about his frustrations with racial dishonesty and he told me scores of other things about himself as well -- his romantic failings and underdeveloped ambitions, his passion for jazz, guitars and baseball.

This time, I didn't write anything down. I didn't want to. We were so obviously in love that neither one of us bothered to say so. We did wonder aloud about the propriety of a reporter falling for a source, but we couldn't do anything about it except keep a low profile for a while. On our first official date beyond the coffeehouse, we thought we'd go to a movie, but instead we wound up driving around Los Angeles to avoid being seen together. We sat in his big old Lincoln on a road high up in the Sepulveda Pass, among the hills that divide L.A. from itself, and talked for hours more.

There was never any question that I would marry Alan. I did, in October, roughly a year and a half after we first met. My sister is still flabbergasted that I married the teacher who loomed the largest in her adolescence -- she sometimes slips and calls him "Kaplan." There is and always will be the race issue -- the raised eyebrows on both sides of the color line, the people who question our ethnic loyalty and politics. This is no surprise, especially considering the ethnic rancor that brought us together in the first place.

We understand the questions others may have about our relationship, and we often raise them ourselves. The concerns we each had about race before we met remain firmly in place, perhaps even more firmly than before. We do not want to be poster children for interracial marriage or the latest diversity campaign. Love for us is a triumph not of integration but of imagination, the wild-card coupling of a pair of resolutely lonely hearts who chose to navigate the same rough, but potentially magical course.