Whoever came up with the "street" drug names in the White House drug office must have scored some radical Dinkie Dow. 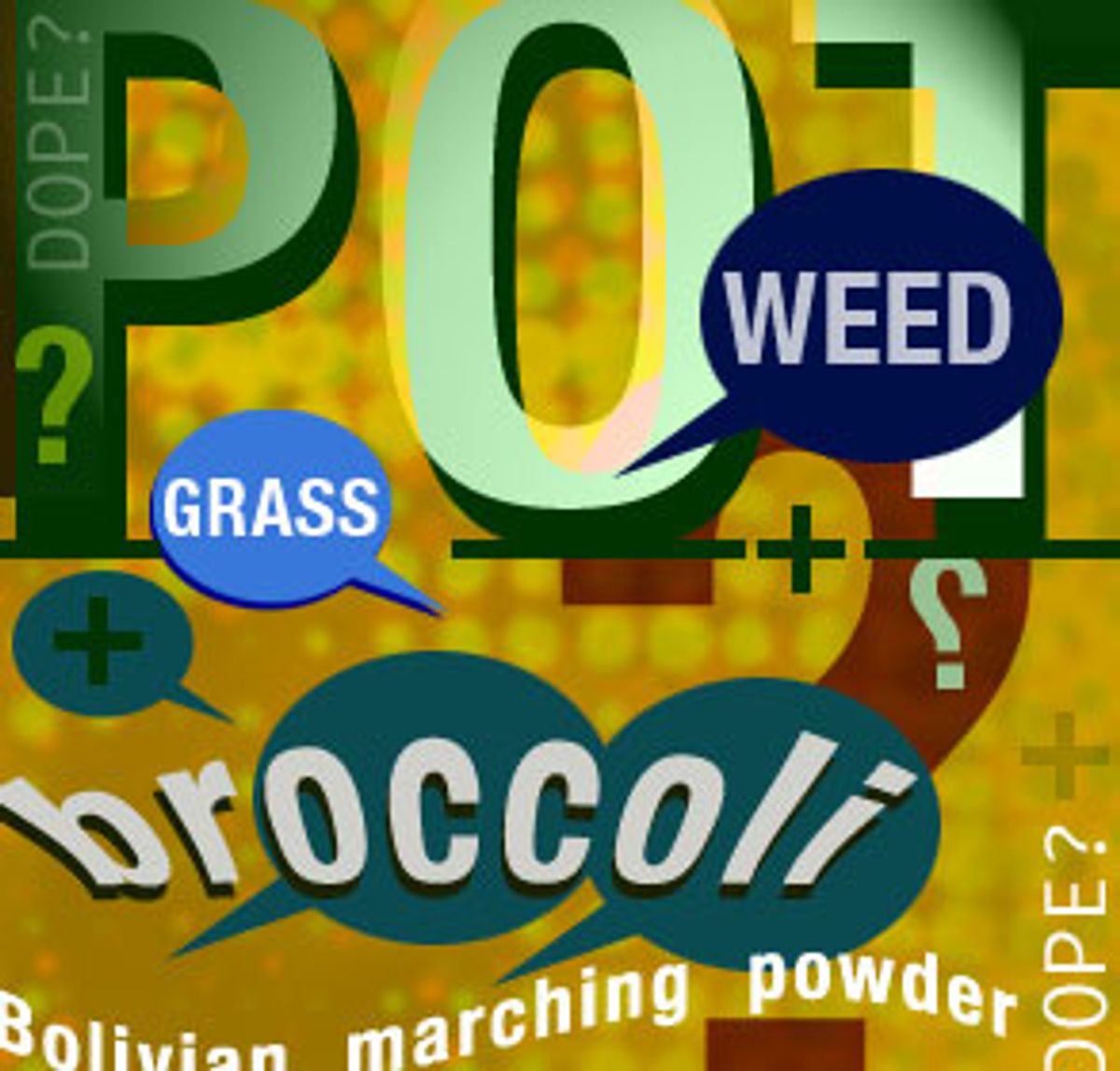 The drug culture has a language all its own, an underground dialect of slang and idiom familiar only to those in the know. But don't take my word for it. The White House Office of National Drug Control Policy, the nation's chief anti-drug agency, has compiled an exhaustive, and thoroughly exhausting, database of more than 2,300 street terms for drugs or drug-related activity, like, say, taking drugs.

"The ability to understand current drug-related street terms is an invaluable tool for law enforcement," intones the introduction, sounding like a cop with mirrored sunglasses giving a lecture about drugs, which may in fact be the original source. "A single term or similar terms may refer to various drugs or have different meanings, reflecting geographic and demographic variations in slang."

No wonder we haven't won the war on drugs -- the drug side has a different word for everything! Often, there are dozens of terms for the same substance. For example, marijuana, a popular "gateway" drug derived from the flowers, buds and leaves of the cannabis plant, is variously known on the street as pot, dope, grass, ganga and killer green bud. Already familiar with those names? How about baby, chocolate, Muggles, Dinkie Dow or Pretendo? Still with us? Try putting sezz, snop or splim in your pipe and smoking it.

According to the database, another street term for marijuana is "broccoli." Who knew? But it does throw an interesting light on former President George Bush's stated dislike of the green vegetable. Street-savvy druggies are also said to refer to marijuana as the "assassin of youth," not coincidentally the title of a 1936 anti-marijuana film (although back then, the enemy was "marihuana"). Already, discerning lexicographers will discern the promised geographic and demographic variations in slang starting to make themselves known. The assassin of youth is also known as "laughing weed" and "crying weed," suggesting a wide range of possible effects on the user, and as "Texas tea," which casts a sinister light on the true source of Jed Clampett's fortune. The green stuff also goes by the street names "indica" and "sativa," hinting at a subculture of dope-smoking botanists in white lab coats roaming our nation's broccoli-strewn streets.

Marijuana, of all illegal drugs, has inspired by far the greatest number of street terms, according to the database. Perhaps that's because the laughing weed is the most commonly used recreational drug. Or maybe it's because regular users have impaired short-term memories and have to keep making up new terms for their drug of choice.

But while Muggles assumes many disguises, so, too, does "the big C," or cocaine. The white powder goes by more than two dozen street aliases, including coke, blow, flake, nose candy, Carrie Nation, teenager and glad stuff. Another term for cocaine is "all-American drug," which sounds like the term a newspaper doing a five-part series on drugs would use to refer to the glad stuff. Cocaine is also called "gift of the sun god" by some clearly overexuberant users, and supposedly has been known to trade under the name "Bolivian marching powder."

Somewhere in the White House, there's a dog-eared copy of Jay McInerney's "Bright Lights, Big City" under lock and key.

From the glad stuff, the list quickly veers into the hard stuff. Heroin, the database informs us, is known on the street as "sh*t," although it's not clear whether the White House deleted the letter or heroin users are unusually fastidious. (If heroin addicts won't clean up their lives, at least they may be cleaning up their language.) Heroin is also known on the street as the "hero of the underworld," although it's hard to imagine where that particular street might be.

Phencyclidine, a drug developed in the 1950s as an animal tranquilizer, goes by the shorthand PCP, probably because none of its users can pronounce the full name. PCP is also known as "aurora borealis," a curiously florid term for such a mind-numbing drug. Geographic variations in slang being what they are, it's reasonable to assume that south of the equator, PCP is known as "aurora australis."

With thousands of drug terms out there, it seems odd that some names purportedly apply to two or more drugs. The White House list defines "blotter" as being cocaine or LSD, a not-insignificant distinction. "Chocolate" is alternately marijuana, opium or amphetamines. "Black beauties" are defined as amphetamines or barbiturates. "Bad seed" is variously described as marijuana, heroin and peyote, while "Christmas tree" refers to marijuana, amphetamines or depressants. No wonder so many drug users have a "bummer trip" (an "unsettling and threatening experience"). After doing up a few Christmas trees and chasing them with some black beauties and bad seeds, even an experienced drug user may have no idea what he's just consumed.

Why do people do drugs in the first place? The goal of many appears to be to "get off" ("to inject a drug; get 'high'"). Drugs are often found at raves, "parties designed to enhance a hallucinogenic experience through music and behavior." At a rave, participants might use code phrases such as "Are you anywhere?" -- which means "Do you use marijuana?" -- or "How do you like me now?" -- meaning cocaine. (Sample rave drug transaction: "Are you anywhere?" "No, how do you like me now?")

The deal might involve a "broker," or "go-between in a drug deal." Unlike a stockbroker, it is customary for the drug broker to actually deliver something of value. The buyer hands over some "lettuce" (money) and the deal is done. If the dealer happens to be a "body-stuffer" -- an "individual who ingests crack vials to avoid prosecution" -- the transaction could be delayed an hour or more.

There's no indication of how long it has taken law enforcers to gather the more than 2,300 street terms, but the list is clearly the work of many decades. "No attempt was made to determine which usage is most frequent or widespread," the list says. Indeed, some of the street slang may be a tad dated. Marijuana is unlikely to be called "Mary Jane" or "Acapulco red" all that often anymore. Open-air drug markets these days aren't dispensing many "Abes," defined as "$5 worth of drugs." Terms like "yellow submarine" (marijuana), "Lucy in the Sky with Diamonds" (LSD), "Rainy Day Woman" (marijuana again) are rarely heard outside of Beatles conventions and Bob Dylan concerts.

And "a used match cut in half to hold a partially smoked marijuana cigarette" is no longer called a "Jefferson Airplane." I'm pretty sure that device is now known as a "Jefferson Starship."

But maybe I'm just out of touch with current drug lingo. Perhaps the frontline soldiers at the Office of National Drug Control Policy have their finger on the pulse of the street. To put the White House street terms list to the test, I took it with me on a recent walk in San Francisco's famed Haight-Ashbury District. What better place to "get a gift" (obtain drugs) than the historic ground zero of recreational drug use.

Almost immediately, a scruffy youth approached me, his unkempt appearance readily identifying him as a candyman (drug supplier). "Kind bud?" he asked, which I knew from the list is a street term for marijuana. (Actually, the list renders it as "king bud," but that's close enough.) Making sure the area was free of heat (police or narcotics officers), I coolly slipped into my own street patois. "Yeah, I'll take an Abe," I said casually. "You want the lettuce now?"

The youth seemed confused; perhaps he was under the influence of laughing weed or was shaking off a bummer trip on Christmas trees. "Are you a cop?" he asked warily. That had me stumped. I quickly paged through the list and found the entry: "Cop" means "obtain drugs." "You better believe I'm a cop," I replied. The youth quickly turned and walked away, no doubt to find his big man (drug supplier). I left before he could return, not wanting to give him the satisfaction of a sale.

So, hats off to the folks who compiled this impressive compendium of drug terms. Not even a streetwise drug dealer could tell I was cribbing from a government list to speak the secret language of the streets. With this invaluable tool in the hands of law enforcement, the war on drugs is as good as won. Soon, parents will once again be able to tell their children to "eat your broccoli" without prompting knowing smirks from the kids.