Riding the Cottonmouth Express -- to hell

Some passengers looked up; others were oblivious. Me, I wondered how they were going to ship my corpse back East. 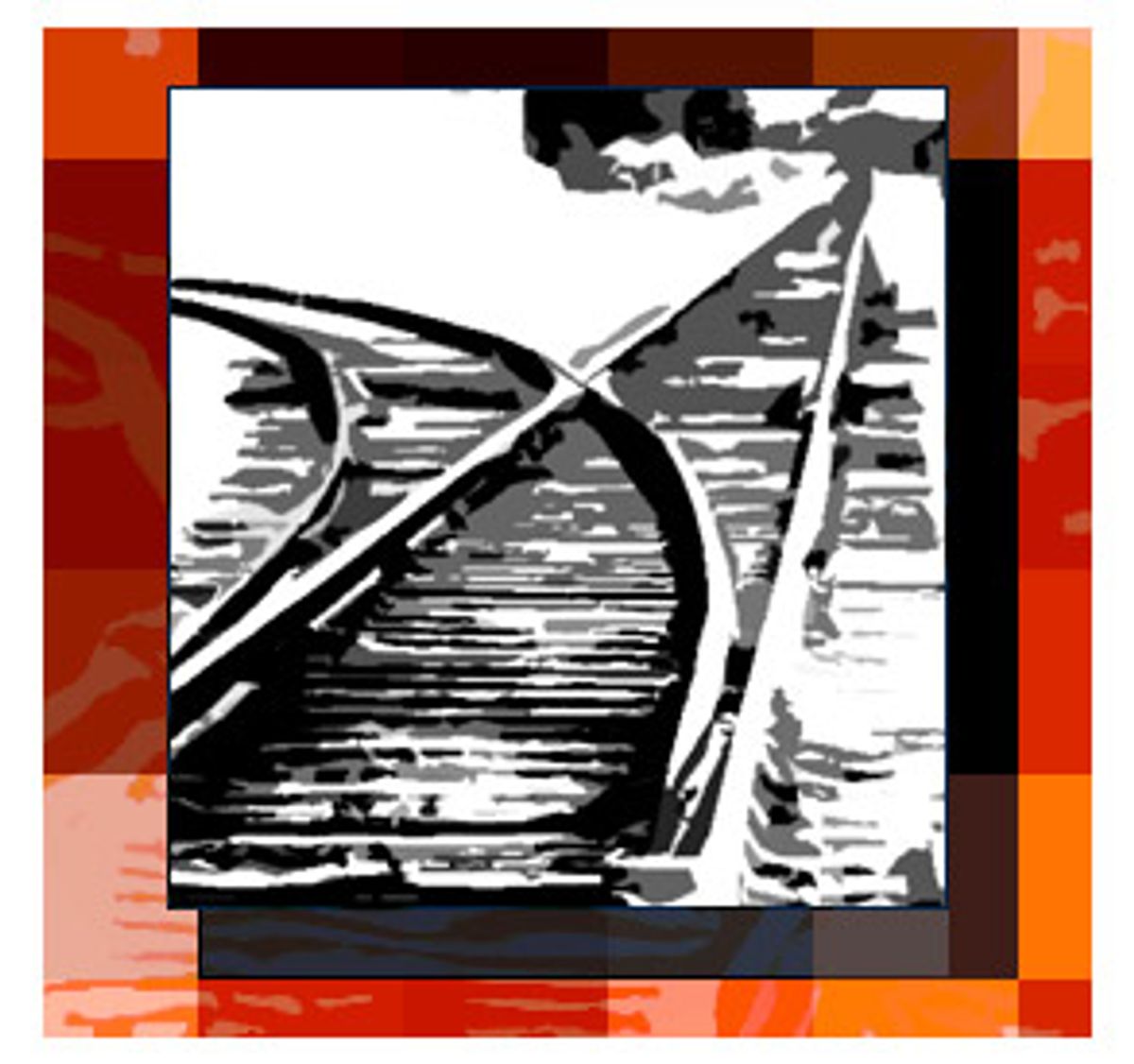 In my memory we put on windbreakers, and checked if we had money, and smoked what was in the old pipe, then left for the city and the sun still hadn't gone down. Nothing was an omen of anything.

On the train I sat next to Amy and leaned my forehead against the glass. William sat near us. I think he threw something at us from his pocket. This was summer, in most ways. I was looking out the window immediately.

Vividness began without warning. The late afternoon muddy yellow light, the docks and the cranes on the left. Things were hypnotic. Maybe William made a good face. Something snuck up and I felt a constriction in my throat.

I was visiting the edge. I'd been there two or three times before, long nights by definition. People who go to the edge always go back eventually. It's not funny. Bad mushrooms can take you there. Same for heavy turbulence on a 747 and certain phone calls after midnight. And same, apparently, for paranoia. When there's no crisis to draw you inside out and panting, it seems certain bodies will invent one: I couldn't swallow.

Quickly the discomfort became fear. I needed water. I knew this to be an illusion, a backward mirage, but that did nothing for the desert in my throat. The affliction is petty, but in the grips of panic, pettiness explodes nicely to make swallowing a life-or-death issue. I attempted distraction. I looked at signs and read them backward. I stared out the window again and allowed the image of a gasping death. I still couldn't swallow.

Things started moving fast. I glanced around. The air got thin and sandy, I thought. People were unaware. I couldn't tell things apart. I looked at my friends. They said something about cats, maybe. I turned away. I turned back and looked them over for water for the 10th time. I looked in empty seats for left-behind bottles. I would've drunk from a gutter. Would a kind soul spit in my mouth? I wondered. Humility had nothing to do with anything.

Like any amateur paranoiac in an immediate health crisis, I assumed the necessary medical credentials for determining that death was imminent. My lungs felt tied and cheap, like balloon animals. My hands were clammy, which struck me as a symptom of something I couldn't remember. And my heart was racing, right there alongside the train, pounding with an embarrassing earnestness.

People like telling paranoid people they're being paranoid. I tried it on myself and found it to be irritating. The business at hand was fighting off death, and preparing for death when the fighting off didn't work. Health paranoia is unresponsive to critique. Those suffering from other varieties will at least pause to inform the critic that he's naive. They take out charts with alien abduction diagrams. A person with acute medical paranoia sits quietly and hears nothing but the dry, lonely sounds of not swallowing.

After the monitoring of life signs comes the prognosis. The train was entering the tube, a filmic ratcheting up of terror like when the spaceship loses radio contact for that long, tense scene. The tube is when the train burrows under the San Francisco Bay for seven uninterrupted minutes. Tourists on board assume this is when the earthquake will hit. In reality, this is when it's important that vital signs remain steady, at least until the train is back in the world. I gave myself eight minutes of life before the mysterious and fatal consequences of sustained not swallowing became manifest.

The train stopped halfway into the tube. Some passengers looked up from their magazines; others were oblivious. Me, I wondered how they were going to ship my corpse back to the East Coast for the funeral. "We have a delay," the conductor announced. I tried to hear something in his voice about how long we'd be there, and what the cause was, and whether I'd make it. He had a plain voice. We sat. I asked Amy how she was. She was fine. I asked William how he was. He was fine. There's no self-respecting way to tell friends you're dying a swallowing-related death. I looked out the window again.

As a teenager I experimented lightly with other paranoias. The schools were distracting us and the government was hatching plans. Was that a click on the phone line? and so on. It was diversionary. I dug up the money I'd buried as a child and buried it elsewhere.

But I didn't mean it; in reality, I was about as paranoid as a glass of milk. Deep down I believed everything anyone told me, immediately and unconditionally. While others fussed over exciting conspiracy theories, I drew monkeys on my math homework. When you're a 10th-grader barely remembering your locker combination, it's hard to believe there are people getting it together enough to conceal a massive government secret.

Now, below the San Francisco Bay, I had paranoia in earnest and the romance was laughable. Not that I was laughing. In fact I was chewing on my sleeve when the train finally lurched forward. The denouement was absurd. Within five minutes we had arrived and I was at a water fountain. Like all paranoia, the health variety eclipses everything, even other paranoias; when you're focused on surviving a train ride, you can't even muster a more community-minded panic about government coverups or multinational conspiracies.

And then, in its final gesture, paranoia covers its own tracks. After the fact, we recognize it as an obsessive reading of signs, but we rarely get why. It eludes us or we move on. We leave the train station with our friends, and our case study dilutes into anecdote, and the thing that pulls you to the edge just retreats a while, until it needs you again.