Chris Rock, reborn as a white guy, blazes through a perfectly pleasant "Heaven Can Wait" rip-off. 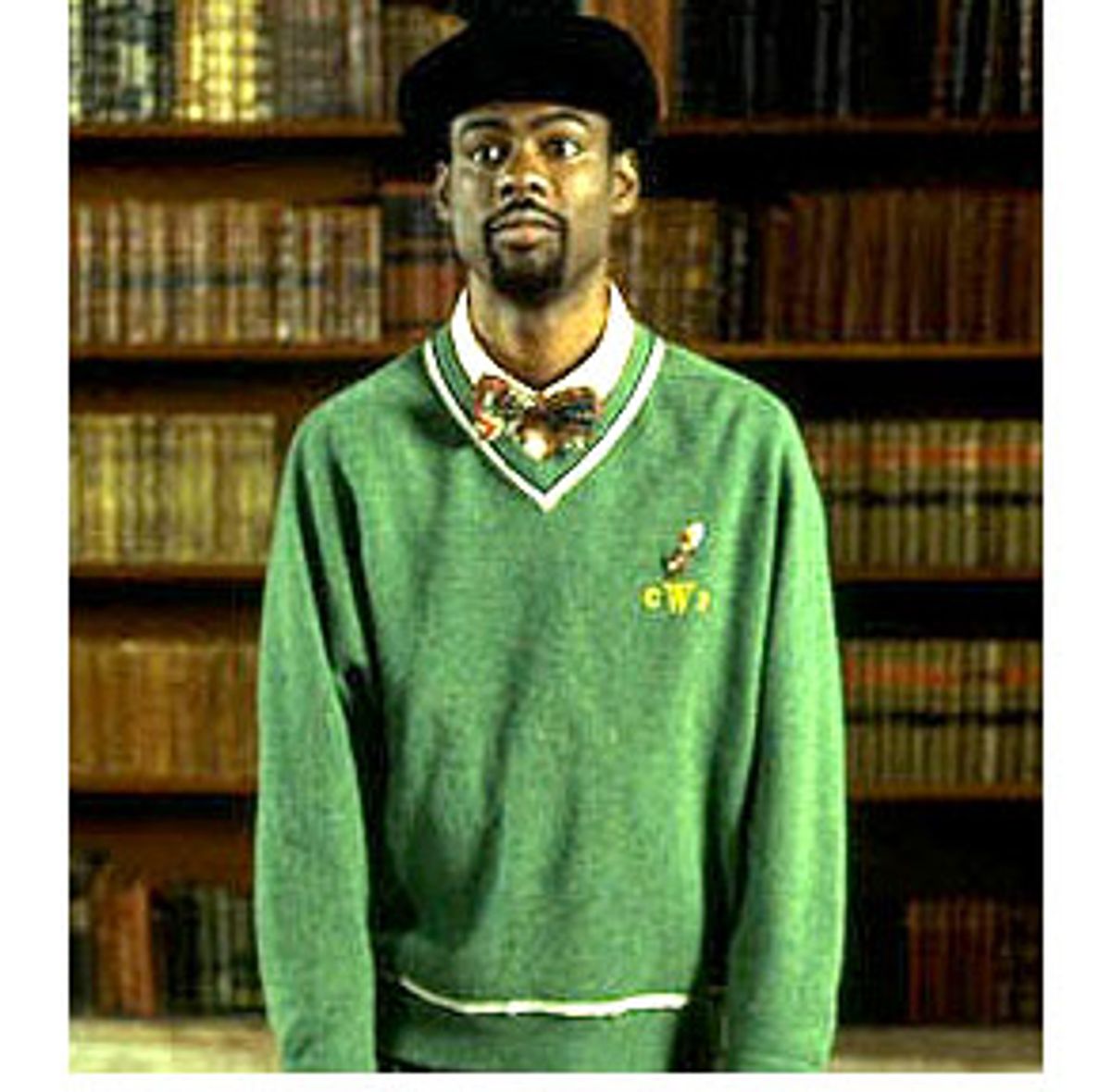 Paul and Chris Weitz's "American Pie" is one of those pictures that seem to mean different things to different people. At the time of its release, almost everyone I talked to mentioned the infamous apple pie sequence. Most barely recognized the way the movie dived so pointedly into the choppy, glittering waters of male-female relationships among teenagers.

But as more people saw the movie, especially on video, the pie scene became old news. I found that the conversations I had with people about the movie became more complex. At the very least, they'd often readily admit how sweet it was -- they saw the relationships between the kids, and not the poor victimized pie, as the movie's focal point. And many expressed genuine fondness for the movie instead of shrugging it off as another ridiculous teen comedy.

The Weitz brothers' new picture, "Down to Earth," a remake of the 1978 Warren Beatty, Buck Henry and Elaine May collaboration "Heaven Can Wait" (which itself was a remake of Alexander Hall's 1941 "Here Comes Mr. Jordan"), isn't likely to resonate like "American Pie." But it is proof that the Weitzes have a knack for grooving on a good-natured but not saccharine vibe, for making pictures that are sweet-tempered without being annoyingly smooshy.

In "Down to Earth," Chris Rock plays Lance Barton, messenger by day, comedian hopeful by night, but his act is going nowhere, despite the best efforts of his manager, Whitney (smooth and utterly winning Frankie Faison). Riding home on his bicycle one night, Lance is distracted by a beautiful woman crossing the street and is subsequently hit by a truck; unbeknown to him, angel Keyes (Eugene Levy, whose magnificent eyebrows speak the equivalent of the Encyclopedia Britannica) has been standing by with his stopwatch, waiting for the accident to happen.

It turns out, though, that Keyes has goofed; Lance isn't due to die for 40 more years. The only thing that can be done, claims Keyes' boss, King (Chazz Palminteri, looking suave in a powder-blue tux, as only a top-dog angel could), is to find a new body in which to house Lance's soul. The only one currently available belongs to Charles Wellington, a big-business stinker of a millionaire whose wife (Jennifer Coolidge, looking like a superpneumatic cartoon version of Dyan Cannon, who played the corresponding character in the original) is scheming to kill him. Lance sees himself when he looks in the mirror, but everyone else sees a paunchy, balding, whiter-than-white captain of industry. It's not long before Lance starts taking pleasure in using his new identity (and money) to do nice things for other people, even as he maintains plenty of his jagged and acerbic edges.

"Down to Earth" is a little disjointed in places. It's sometimes hard to buy the idea that Lance looks like Wellington to everyone else when all we can see is Chris Rock. Once in a while we get a shot of Wellington the white guy, played by Brian Rhodes, but he's not much of a presence -- and granted, you wouldn't want him to be, given that Rock is so much fun to watch. But the Weitzes sustain the energy through the picture's 90 or so minutes. It doesn't feel fat or padded, like so many contemporary comedies, and its very leanness is appealing.

The script, credited to Rock, Lance Crouther, Ali LeRoi and Louis C.K., isn't much more than a rack for Rock to hang his jokes on, but it's perfectly serviceable. And there are a few moments that are played less for laughs than as a way of making the point that there are certain things -- jokes or mannerisms or figures of speech -- that white people just can't get away with. When Lance/Wellington tries to do his comedy routine for an all-black audience that sees him as a portly rich guy, their incredulous stares practically bore right through him. Outlining the difference between malls in black neighborhoods and those in white ones, Rock says, temporarily oblivious to the fact that his audience can't see that he's really black, "They ain't got nothing in the black mall but sneakers and baby clothes, 'cos all we're doing is running and screwing." The sequence works because we can see Lance/Wellington as Rock, but merely imagining the same sentence coming from a white guy is enough to make us cringe. The awkwardness of the audience washes over us too; the overwhelming sense that the joke is inappropriate, if not insensitive, puts us right in its shoes.

But mostly, "Down to Earth" isn't out to make any overt political or racial statements, and it's easy to get swept along by its buoyancy. Rock has everything it takes to keep the film from bogging down. Let loose, he cruises through the movie with a lightning-speed restlessness: As you're processing one joke, you can see his mind spinning forward to the next two.

Rock isn't easily pigeonholed as a comedian. Often his jokes ricochet freely and sometimes wildly around issues that people readily identify with black culture (poverty, whites' perceptions of blacks and vice versa, and so forth), but you never know when they're going to circle back with a vaguely surrealist ping. In the movie's opening scene Lance regales the doorman of a fancy apartment building with a lecture for assuming that he, a black man, must be standing on that doorstep only because he's delivering something. "How do you know I'm not here to visit a friend?" he asks the doorman, who shrinks with embarrassment. But instead of working the joke into the ground, Rock tweaks it lightly and sends it spinning. "How do you know I didn't just show up to have a cup of cocoa?" The innocence of the image and the bizarre spontaneity of it make the joke even funnier, without wearing down its pointedness.

The movie's funniest bits happen in its cracks and corners, places where Rock tucks in a seemingly spontaneous wisecrack or a gleefully blurted insult. Before Lance took over his body, Wellington had privatized a local community hospital, enraging one of its workers, Sontee (Regina King), who storms into Lance/Wellington's living room to inform him that she's not going down without a fight. When she tells him she's planning to make a stink at one of his upcoming board meetings, he thanks her for reminding him about it. "I gotta get a haircut, maybe buy some gators," he muses offhandedly.

Lance, of course, has fallen instantly in love with Sontee, and it's easy to see why. King, who has given knockout performances in pictures like "How Stella Got Her Groove Back" and "Jerry Maguire," has a shimmering, grounded presence here. She's not flashy, and she's the kind of performer you wish could become a star; she has just the right mix of believable, resonant beauty and finely tuned instincts, and her scenes with Rock work beautifully. Rock is a big personality, but he's able to scale back effortlessly when he's playing against King. She seems to be the kind of actress who makes her colleagues' work easier, whose openness sets off others' talent even as her own gifts shine subtly.

The most joyful moments in "Down to Earth" are the ones that radiate pure silliness. For instance, there's the sight of Lance/Wellington, pleased as punch to be dressed in Wellington's fancy-silly clothes (plaid golf knickers, argyle socks and a smoking jacket) or shimmying in front of a wall-size, motion-activated TV just for kicks. Or the vision of Lance/Wellington's housemaids (Martha Chaves and the lacerating Wanda Sykes) going about their regular household chores while proudly flouncing about in the puffy fur coats he has given them.

The Weitzes haven't come up with a masterpiece in "Down to Earth," but they have put their stamp on a perfectly pleasant 90-minute diversion. Even with a star as potent as Rock, their sensibility shines through the movie. And their integrity, balanced with a not-too-sugary sense of fun, is made obvious by one significant fact: Nowhere in "Down to Earth" do they even attempt to top the pie shocker of their first movie. "Down to Earth" doesn't have as many gently shaded angles as "American Pie" does, but from the way it hangs together as pure entertainment, it's clear that the Weitzes' first movie wasn't just beginner's luck. Paul and Chris Weitz know exactly what they're doing. Their talent lies in making it look as if they're just horsing around.