Actor Ed Harris' charged biopic of the abstract painter is not quite the divine mess it should be. 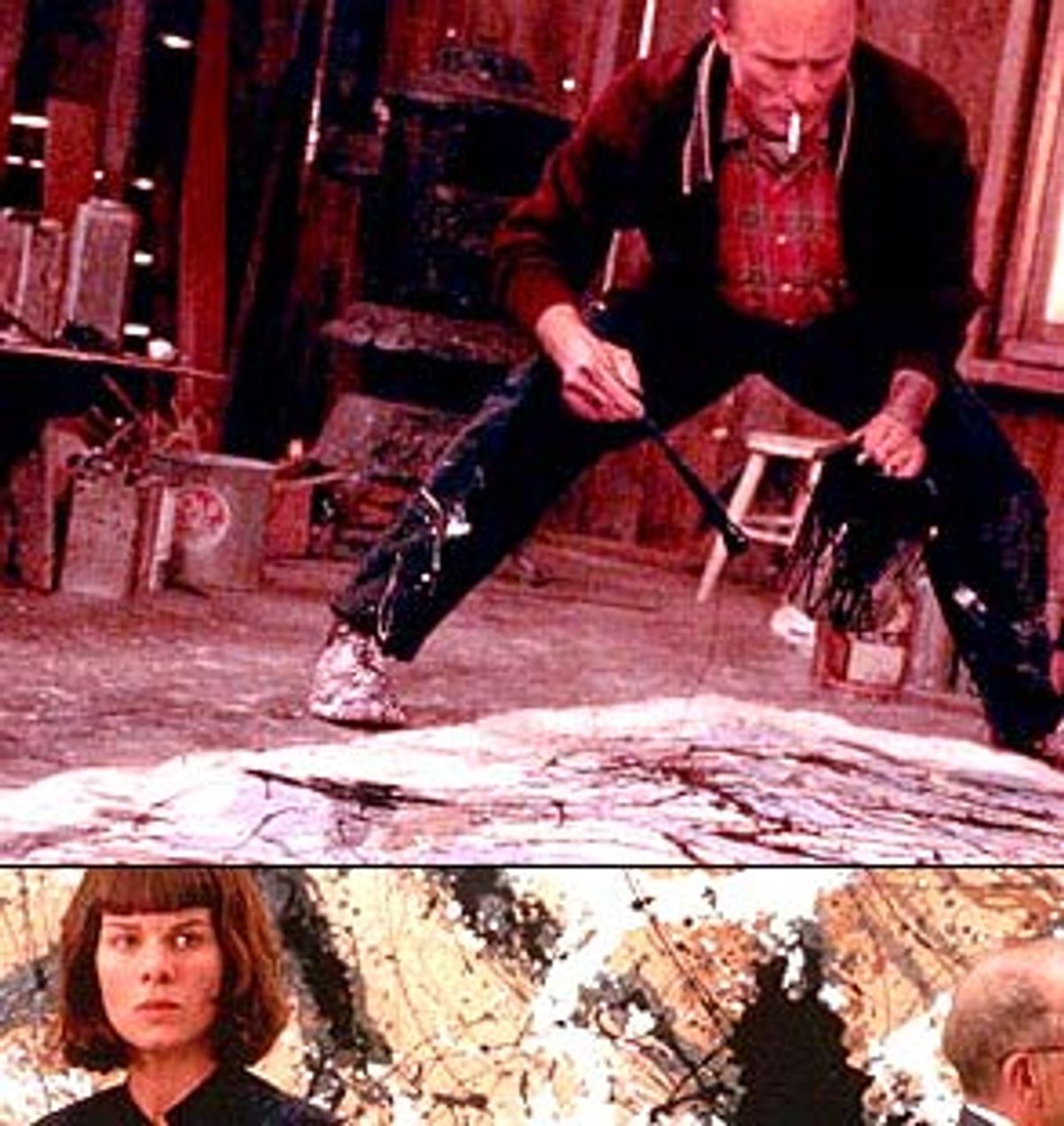 If you've ever stood in front of one of his paintings, it's all too easy to find yourself in awe of Jackson Pollock. A work like "Lavender Mist," which may not look like much of anything reproduced in a book, up close reveals itself as both a whispered secret and a shout, a mysterious map of veins and arteries, roadways, spider-web threads and ice crystals. At first its pale grays and yellowed creams seem to retreat behind a lacework of variegated blacks; when you look again, they've come forward, stealthily, as a way of reprimanding you for glancing at your watch or the person next to you, for having the temerity to take your attention away from it even for an instant. "Lavender Mist," soft in its boldness and bold in its softness, exists for one reason only: to eat you whole.

It takes some kind of balls to bring the life of the genius behind that painting to the screen, and Ed Harris' directorial debut, "Pollock," is clearly a labor of love, tempered with a healthy amount of respect -- perhaps too much. Harris, who also stars, has taken great care not to make an exploitative movie: He doesn't soft-pedal Pollock's alcoholism; his sometimes paralyzing self-doubt; his childlike and destructive dependence on his wife, fellow painter Lee Krasner (here played by the astonishing Marcia Gay Harden); but he doesn't glamorize them, either.

Yet there's so much measured delicacy to "Pollock" that it's almost the antithesis of who and what Pollock was. This is a precise, deliberate movie, so carefully calibrated in its tone and structure that, as a whole, it ends up reading like a completely well-intentioned lack of guts. Harris isn't a coward. The problem could be that he has so much nerve as an actor (it's evident here and in almost every frame of his career; he's among the best we've got) that he may have felt he needed to tone down the picture as it played out around him. But I'd like "Pollock" so much better if it were a passionate mess, if it made its mistakes in big loops instead of tiny scribbles. As it is, it's so respectful of Pollock that it's not quite worthy of the bastard he sometimes was.

"Pollock" does feel satisfyingly complete in terms of the way it covers the painter's life and career. If there are disadvantages to being as meticulous a director as Harris is here, there are pluses, too. "Pollock" covers everything from the painter's early days in Greenwich Village circa 1941, where his troubled partnership with Krasner began, to the years he spent in his studio at his home in East Hampton, Long Island, where his earlier cubist influences flowered into a style that was completely his own.

The movie fills in an impressive range of details, giving a sense of Pollock's awkward but affectionate bond with his mother (Sada Thompson), his relationships with his contemporaries (Val Kilmer, wearing marvelous prosthetic teeth, appears in a small role as Willem de Kooning) and the kind of music that influenced and energized him (he had a predilection for Gene Krupa and Artie Shaw). Harris works some fine embroidery on the friendships and unions that most deeply influenced Pollock, including those with art critic Clement Greenberg (Jeffrey Tambor), eccentrically brilliant patron of the arts Peggy Guggenheim (Amy Madigan, in a roughed-up and funny performance) and, of course, Krasner.

Harris puts plenty of blood and soul into his portrayal of Pollock, revealing layers of complexity to the man that make perfect sense, given the way so many of his paintings are resolutely complete works of art that nonetheless feel like half-resolved conflicts. For all that's wrong with "Pollock," there's one thing that Harris does right: He never stoops to cheap psychoanalysis, even as he turns Pollock the man inside out before our very eyes. His performance illuminates the interior workings of the man without demystifying them: It's terrifically hard to play someone who's closed off to much of the world, but Harris gets it exactly right. You can see it in the way he declines his head ever so slightly when talking to another character, not so much avoiding eye contact as making that essential, tentative flicker of eye contact, or in the way his eyes sometimes show empty confusion that's already gone far beyond depressive despair.

Harris balances all that subtlety with a decisively masculine physicality in the way he shows how Pollock went at his work, lunging at a vertical canvas as if he fears it will walk away just as he's figured out what to put on it, or performing a Gene Kelly ballet on a canvas laid out flat on the ground, turning every arc of movement into a part of the finished painting. (There are moments when Harris seems to have completely internalized Jeff Beal's terrific musical score, and the complete effect comes off beautifully.) As an actor Harris is intuitive enough to know that you can't diagram creative genius on the screen, so he goes for something else here: His performance is a tone poem to an unknowable man.

As good as Harris is, though, it's Harden's performance that sticks with you long after you've seen the movie. Working from a script by Barbara Turner and Susan J. Emshwiller, which was adapted from Steven Naifeh and Gregory White Smith's 1989 Pollock biography "Jackson Pollock: An American Saga," Harris has gently molded the narrative of Pollock's life into a love story. It's not a forced fit. Krasner, as Harden plays her, is less a muse than a mother, a disciplinarian, the centripetal force that holds Pollock's life together. She's a woman who subjugates her own painting career (not to mention her own life) not to her husband the man, but to her husband the genius. It's the way she marks that distinction that gives her performance so much fire, and makes it hurt so much.

When we first see Harden's Krasner, with her Bettie Page hairdo and rack to match, he's her new neighbor. She forces her way into Jackson's studio, examining his paintings with a scrutiny that harbors mostly wonder and just a scrap of jealousy. The way she moves about that studio in her first few minutes of screen time tells you almost everything you need to know about her character: Solid and sturdy, with a flat-footed, deliberate, erotically charged walk, she's the Wife of Bath by way of Brooklyn. But it's also clear from the start that she's an intellectual in a hausfrau's body. She falls in love with Pollock the man, and there's tenderness there; but the lioness love she feels for his painting -- the place where his truest self lives -- is all blood, heart and guts.

Harden doesn't play Krasner as Pollock's victim; if anything, she's a willing victim of her own will. Harden's reading of Krasner leaves no room for wilting self-pity; she plays Krasner as being fortified somewhat by supple, innate strength but also by her power as a gargantuan nag. Her Krasner is a figure so strong in her own right that not even one of the biggest, most troubled geniuses of the 20th century can wrestle her down. In an early scene, she turns to Pollock and, aware of his inherent unpredictability and sexual infidelities, announces baldly in her thick Brooklynese, as if she were gently but firmly admonishing him to pick up his socks, "I want to get married, Pollock. I think you're a great artist. I want very much to keep living with you. But I want that commitment from you, too. You'll have to make the decision." With complete calm and naturalness, she returns to what she was doing, while he lets the speech sink in as if it had been uttered in a language from another planet. He's not sure whether he's lost or found.

Harden also shows us the toll that her life takes on her. The marriage was never an easy one, but toward the end (Pollock died in an auto crash in 1956) the emotional violence within the union became feverishly unbearable. Krasner never crumples, and the fact that she laid her own career aside for his is barely mentioned in the movie. (Why mention it when it's a throbbing, ever-present undercurrent?)

But Harden plays Krasner as a woman who took the only path possible; you can see it in the set of her jaw, in the way she refuses to melt down in any traditionally "womanly" way when she's in pain. What good would it have done for her to throw temper tantrums to match her husband's? And played back on the grand scheme of history, would the art world have been better off if she'd focused on her own career instead of nurturing Pollock's? That's a hard truth to face, but an essential one.

As it was, and as Harden plays it here, Krasner was the midwife, a role that's held in great esteem when one is helping to bring actual babies into the world. Why shouldn't we think of paintings the same way? Would Pollock have been a genius without Krasner? Most assuredly. Would he have been the same genius without her? Definitely not.

The distillation of everything that "Pollock" should have been is swirling around inside Harden's performance. Sometimes you have to match boldness stroke for stroke, or splatter by splatter. Harris, as a director, just doesn't have it in him to stand up to Pollock, but Harden does. And she understands what Krasner must have known intuitively. Greatness comes not from cleaning up messes, but from allowing them to be made in the first place.