Their love, like this mawkish weepie, was doomed. But don't blame Keanu Reeves and Charlize Theron. 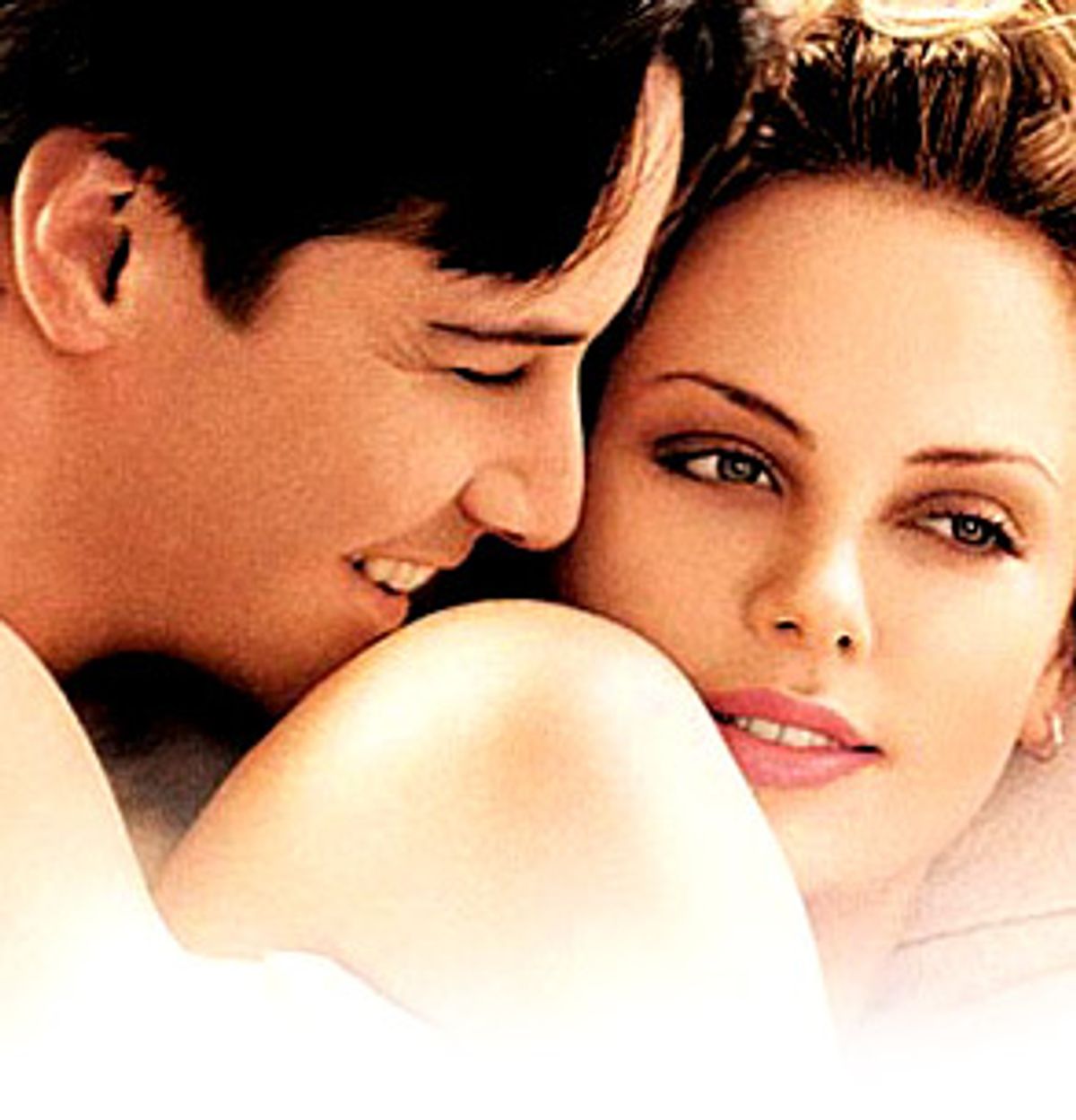 Because, in "Sweet November," Charlize Theron wears madcap hand-knit scarves wrapped around her fragile swan's neck, because she turns cartwheels on the beach, because she cuts her hair with a Flowbee, you just know she's harboring a deep, dark secret. Nobody in the movies has that much joie de vivre and gets off scot-free.

"Sweet November" presents double trouble for Theron and costar Keanu Reeves. It would be hard to be any actor trapped in a wilted remake of the 1968 romance weepie that starred Sandy Dennis and Anthony Newley. Reeves and Theron face additional obstacles. They're two performers of great charm and grace, actors who clearly know what they're doing even when they're feeling their way through the mist of lousy material. But there are plenty of moviegoers and critics who are dubious of their talents; Reeves especially has long been the target of naysayers, and, as so often happens with young actresses, Theron's sheer attractiveness seems to stand in the way of the acceptance of her as a serious performer.

But seeing what they do in "Sweet November" -- how their facial expressions cut across the grain, pleasingly, in the movie's sappiest moments, or how their body language manages to fill in extra layers of feeling between lines of bad dialogue -- is almost enough to make the movie bearable. (Readers who avoid movie trailers and TV ads might want to stop here; I don't want to spoil anything, but the rest of us probably couldn't help noticing Theron's dark under-eye circles and ashen complexion during certain clips in the movie ads, the universal Max Factor shorthand for "The Grim Reaper lurks.")

Whether you can even tolerate "Sweet November" will depend largely on your affinity for Hollywood-formula hankie soakers. If they're not paced like death, they can be primally, if sometimes eye-rollingly, satisfying, like last year's "Autumn in New York." In director Pat O'Connor's hands, "Sweet November" is more tasteful than that picture, and it would be more enjoyable if it were tackier -- it tries to soft-pedal its melodrama even as it slings some pretty hardcore hokum our way, like Theron's asking Reeves earnestly what his "secret dream" is.

The story, for all its hippie-dippie pretensions, follows fairly traditional lines. Theron plays Sara, a saucy free spirit who doesn't have to work for a living. (A lover and rescuer of all animals in need, natch, she used to run her own pet-related business, but got out before it "got too big.") Reeves is Nelson, a driven hard-guy advertising exec who causes Sara to fail her written driver's test by asking her for an answer he doesn't know and then failing to stick up for her when she gets busted by the proctor. As a result, she stalks him -- but in a lovable, nonpsycho sort of way, you understand. Mostly, she just wants him to be her driver when she stages a daring puppy rescue from a research lab.

Before long, she's invited Nelson to move in with her only for the month of November; we learn that she's had previous monthlong lovers or, perhaps more accurately, special projects -- people whom she's taken in and indoctrinated with her carefree ways, changing their lives in the process. (The requisite outlandish but true-hearted transvestite friends who always come along with this kind of movie are of course present here too, represented by Jason Isaacs as the friendly neighbor who might be wearing denim or sequins depending on his whim. After losing his job, Nelson takes Sara up on her offer, reluctantly at first, but he's quickly won over by her zest for living and her mismatched thrift-shop demeanor.

In the script (written by Kurt Voelker, adapted from the earlier movie's script by Herman Rauscher), Theron gets the real raw deal. When we first see her, she's hurtling into the Department of Motor Vehicles to take that test, stumbling on her stiltlike gams and spilling groceries willy-nilly from a paper sack. She's a walking caricature, but you can't help warming to her. With her Kewpie-doll eyes and Roaring '20s curls, she's a gangly screwball pixie. But later she's called on to deliver some real stinker speeches, and her loopiness feels too aggressively written. At one point, she and Nelson look out on the city lights of San Francisco, and she lets loose with some doggerel about being elated to see life going on all around her. Even so, Theron manages to maintain some semblance of dignity for her character, and her satiny glow helps soften the picture's glossy, high-melodrama sheen.

Reeves matches Theron note for note, and in the end -- perhaps because there are fewer hyperdramatic demands placed on his character -- he ends up being even more likable, and more believable, than she is. In his early scenes, Reeves plays a stone-cold ad guy as a cartoon version of the kind of actor critics and viewers have often accused him of being: wooden, remote and overly cool in a bland way. But as the story heats up, he warms to it gracefully, like a dancer hitting his stride. His facial expressions work as a counterpoint to the movie's screwier scenarios. His eyebrows telegraph his incredulity at Sara's goofier shenanigans, and you realize this is a leading man you can trust. He's not one of those guys who fall for the spacey beauty just on principle.

At this point, the critics and viewers who've written off Reeves as a no-talent aren't likely to ever change their minds. If this performance and his creepy redneck turn in "The Gift" don't turn people on to his subtle spark, then it's simply time to write them off. Still, "Sweet November" isn't quite the right vehicle for Reeves as a romantic lead. He doesn't have a particularly broad range, but he's possessed of an exceptional, level-headed sweetness that's his alone, and a sharper, drier, more angular story would serve him better.

Would he be able to pull off a tart romantic comedy? A scene in which he lavishes Sara with 12 silly gifts, including an oversize bottle of smelly perfume, suggests that with his straight-man awkwardness -- as much a part of him as those mesmerizing coal-glitter eyes -- he might be able to deliver the goods.

As it is, "Sweet November" does neither of its leads any favors. But they fill their roles admirably, and then some. Time and again, in a movie that repeatedly threatens mawkishness, you can sense them gently steering away just in the nick of time. They ride this mediocre and overly sentimental little picture like a gust of wind, a lark, instead of a matter of life and death, and that's what makes all the difference.